Empty chairs in the Senate Environment and Public Works Committee mark Democrats' boycott of a vote to advance the nomination of Oklahoma AG Scott Pruitt to lead the U.S. Environmental Protection Agency. 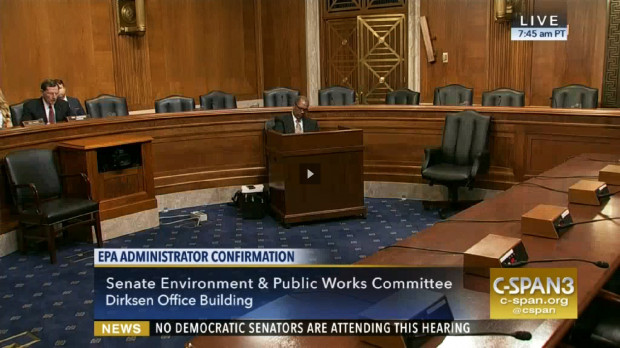 Empty chairs in the Senate Environment and Public Works Committee mark Democrats' boycott of a vote to advance the nomination of Oklahoma AG Scott Pruitt to lead the U.S. Environmental Protection Agency.

With no Democrats in the room, U.S. Senate Republicans on Thursday voted unanimously to approve the nomination of Oklahoma Attorney General Scott Pruitt as administrator of the U.S. Environmental Protection Agency.

Republicans in the Environment and Public Works Committee voted to suspend committee rules to defeat a two-day boycott by Democrats who say Pruitt is unfit to serve as the nation’s top environmental regulator.

Senate Democrats did not like Pruitt’s performance at his Jan. 18 confirmation hearing, and they also said the Oklahoma attorney general did not adequately answer a long list of questions about his past and how he’d run the very federal environmental agency he’s sued and worked to undermine.

Democrats said they got little clarity on Pruitt’s statements casting doubt on the science climate change, his financial and political ties to fossil fuel companies, and when and how he’d recuse himself from lawsuits against the agency.

A week after the hearing, ranking member Tom Carper, D-Delaware, hosted a panel discussion with guests who said Pruitt did little to protect the environment during his time as Oklahoma attorney general.

Foster left the AG’s office before Pruitt took over the agency in 2011.

“It’s my understanding that that level of work in terms of criminal prosecution has not continued in Oklahoma,” she told the panel.

Pruitt later shuttered the environmental unit and opened a “Federalism Unit” to fight the federal government, often in the form of lawsuits against the EPA.

Pruitt declined interview requests until the confirmation process is over. The AG’s office says its environmental work continued under a different unit, but court records and financial data suggest environmental enforcement has not been a top priority for Pruitt.

Republicans on the committee say Pruitt is the right man to reform an EPA that has evolved into a job-killing, states-rights-trampling federal agency that has been running wild with unnecessary environmental rules.

“He went through four rounds of questions,” Inhofe said at the meeting Democrats boycotted on Wednesday. “That’s more rounds than any other nominee in the recorded history of this committee.”

Sen. Joni Ernst, R-Iowa, noted Pruitt answered more than 1,200 questions. “There comes a point when vetting has been turned into obstruction and that is what we’re witnessing today,” she said.

Senate Republicans called the Democratic boycott a political “tantrum” and a “witch-hunt.” Sen. Roger Wicker, R-Mississippi, said he suspects the procedural protest isn’t really about Pruitt at all.

“It is simply about their disappointment with the results of the November election,” Wicker said. “Pure and simple.”

Democrats aren’t the only party to boycott committee votes for EPA administrator: Republicans did it in 2013 to block advancement of Obama’s nominee Gina McCarthy.