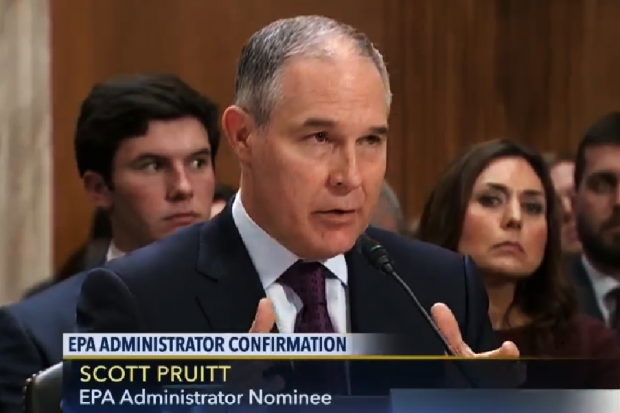 The six-hour hearing in the Senate Environment and Public Works Committee split largely along political lines.

Pruitt had a warm audience from committee chairman John Barrasso, a Wyoming Republican who has blamed the Obama EPA for killing coal jobs in his state.

“Attorney General Pruitt understands the need to both protect the environment while allowing our nation’s economy to grow,” he told the committee.

Oklahoma Republican Jim Inhofe was friendly, too. He told the committee Pruitt’s lawsuits against the EPA were necessary “to protect state and local interests from overzealous and activist executive agencies.”

“Over the last eight years, the Obama administration has advanced a radical environmental agenda,” Inhofe said.

Pruitt will need some legal acrobatics if he’s confirmed. He’s actively engaged in several lawsuits against the EPA —  the very agency he might soon lead. Edward Markey, D-Massachusetts, tried to pin down how and when Pruitt would step away from those legal actions.

“It’s critical that you recuse yourself,” Markey said. “Otherwise, honestly, people are going to think it’s not just the fox guarding the henhouse, it’s the fox destroying the henhouse.”

Pruitt said he would act on advice from EPA ethics lawyers.

Democratic Senators pressed Pruitt on mercury and carbon emission limits. They wondered whether he was concerned enough about Oklahoma’s boom in earthquakes linked to oil and gas production, and they questioned political contributions the Oklahoma attorney general received from fossil fuel companies and other industries.

Democrats also probed Pruitt’s involvement in a state lawsuit over water pollution from chicken manure. That lawsuit was largely completed by the time Pruitt took over the Oklahoma AG’s office, but court records and campaign finance data compiled by the Environmental Working Group suggest he stalled that case after accepting contributions from poultry producers.

The committee asked Pruitt how he’d lead the EPA in a way that avoided disasters like the Gold King mine wastewater spill near Silverton, Colorado, and the lead crisis in Flint, Michigan.

Republican Senators like Dan Sullivan of Alaska welcomed Pruitt’s efforts to fight EPA regulations. Sullivan and and others sought assurances that the Oklahoma attorney general would do more — and continue the fight as the boss of EPA.

Sullivan told Pruitt onerous EPA regulations are taking a mounting toll on business owners everywhere and pointed to a 200-page rule requiring anglers to obtain an EPA discharge permit to hose off the decks of their ships.

“Think about that,” Sullivan said. “If you’re gutting a fish and fish guts or pieces of fish fall on the deck of your ship and you hose it down, you need a permit.”

National environmental groups oppose Pruitt’s nomination to the EPA because of the Oklahoma attorney general’s statements casting doubt on the science of climate change. On this, Pruitt clarified his position — in contrast to that of Sen. Inhofe and President-elect Trump, who have called climate change a hoax.

“I do not believe climate change is a hoax,” Pruitt answered.

Taking it further, Pruitt told Markey that, if confirmed, he would not refute a key federal government ruling — known as the “endangerment finding” — that greenhouse gas emissions are a threat to American public health.

“That is the law of the land,” Pruitt said, assuring Markey that, if confirmed, he had no plans to reverse the agency’s position. “There is nothing that I know that will cause a review at this point.”

While Pruitt acknowledged the role humans and CO2 play in fueling climate change, he questioned the degree of that influence in statements that are out-of-step with the scientific consensus that such activity is “extremely likely” to be the primary reason for global temperature increases.

Pruitt also did not adopt the climate urgency of senators like Vermont’s Bernie Sanders, who pushed the Oklahoma attorney general to explain why the scientific evidence didn’t demand immediate action.