Lake Texoma State Park is still open to the public, but much of it has been sold to Pointe Vista, which demolished the outdated lodge seven years ago. 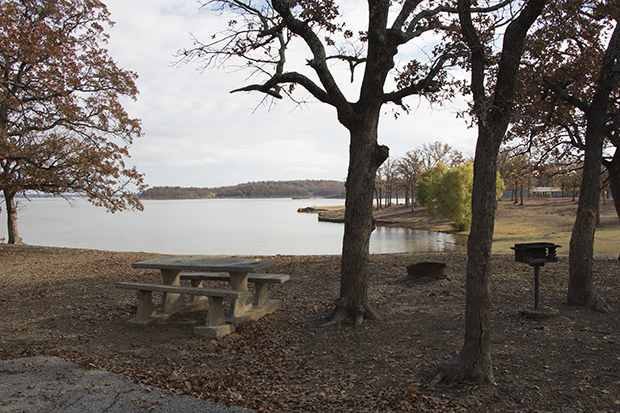 Lake Texoma State Park is still open to the public, but much of it has been sold to Pointe Vista, which demolished the outdated lodge seven years ago.

It’s been 10 years since the state of Oklahoma sold hundreds of acres at Texoma State Park to a private developer that never fulfilled its promise to build an elaborate lakeside resort. Now the Chickasaw Nation is stepping in to bring some economic activity back to the area.

It’s been a long decade for businesses in tiny Kingston, Oklahoma, the town nearest to Lake Texoma State Park and was once one of the state’s most popular tourist destinations. When StateImpact visited Kingston in July, bait shop worker Sheldon Stauffer said the business never recovered after the state sold the park, and its popular lodge was demolished.

“Without people staying there, I’d say we’ve lost 30 to 40 percent most years,” Stauffer says. “Those first three or four years after they tore the lodge down, we were basically just breaking even.”

It should come as welcome news to Kingston residents that the Chickasaw Nation agreed in October to purchase 50 of the primest acres of former parkland. The new plan: A lakeside hotel-casino where the lodge once stood, with bars, a restaurant and cabins.

“Philosophically, this is a project we embrace, because we see the need for that economic activity and improved tourism,”Chickasaw Nation Commerce Secretary Bill Lance says.

Local residents are happy to see any signs of development at the former park that might bring more people to the area. But the entire attempt to privatize the park hasn’t gone smoothly.

An experiment in privatization

In 2006, instead of spending millions to refurbish the run-down lodge and address a growing maintenance backlog, the state sold 700 acres of the park to Pointe Vista, a private developer with ties to powerful father and son Oklahoma businessmen Mark and Scott Fischer, and the late co-founder of Chesapeake Energy, Aubrey McClendon.

Pointe Vista promised to build a $750 million resort. It never did. Eventually, the state Commissioners of the Land Office sued Pointe Vista to force the firm to keep its promise or sell the land back to the state. When the legal dust settled, the state got back 50 acres, and Pointe Vista kept the rest without the previous requirements to use the land as a tourist destination.

All the while, in the halls of the state capitol and in businesses in Kingston, there were whispers of a mystery third party that would buy that 50-acres and develop it. That third party buyer turned out to be the Chickasaw Nation, which denied its involvement until October.

“We made a bad deal”

State Auditor and Inspector Gary Jones, who serves on the Commissioners of the Land Office, says the state is simply trying to make the best of a bad situation.

“I think first of all on behalf of the state, we made a bad deal. We made a bad deal without having safeguards built into it. We conveyed it thinking that they had the resources to develop this,” Jones says. “I’m one of the people that probably would’ve voted for the state to spend money to redo the lodge and redo the cabins, but I was probably in the minority on that.”

Jones wasn’t with the Land Office when the original deal was made. By the time the case was settled earlier this year, he says the state was backed into a corner.

“We’re in a situation where the state has limited resources,” Jones says. “Obviously the people who purchased it have more resources. We could demand specific performance. Specific performance means that we could possibly force them to build the hotel that they had promised to do. But then the question came up about how long does this get drug out?”

Kingston residents and business owners area are yearning for economic development — and they want it now. But not everybody is on board. Kingston resident Stephen Willis has been advocating for restoring the park for years, and he’s not done fighting the Pointe Vista settlement.

Willis says the Commissioners of the Land Office violated the Oklahoma Open Meeting Act by processing the agreement — including paying to buy back the land — before voting to approve the deal at a later meeting.

“You have the top five corporate officers of the state of Oklahoma vote to approve this settlement after they already processed it,” Willis says.

Willis says there’s still no written settlement contract between Pointe Vista and the Land Office. He’s working to find a lawyer to take the case.

An expert on Oklahoma open records laws contacted by StateImpact didn’t see any clear violations based on the information that’s publicly available, but wasn’t aware of the details of the situation.