Sheldon Stauffer outside the Lighthouse Bait and Tackle shop in Kingston, Okla. 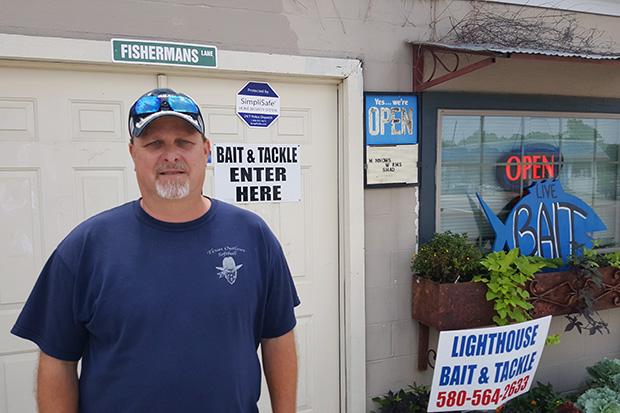 Sheldon Stauffer outside the Lighthouse Bait and Tackle shop in Kingston, Okla.

Lake Texoma State Park was once one of Oklahoma’s most popular parks. Then much of it was sold to a private development firm that has yet to fulfill its promise to build multi-million dollar resort. The matter was recently settled in court, but many local residents don’t like the result.

Not what it used to be

Even on a Tuesday, campers dot the shore at Lake Texoma State Park and vacationers fire up their bass boats and jet-skis. The park is bustling, really. But go a couple of miles west, to the small town of Kingston, Oklahoma, and residents like Sheldon Stauffer will tell you things aren’t like they used to be.

“If you go look at it now, it’s just weeds and trees,” Stauffer says of a now-closed golf course. “They just totally let it go to nothing.”

The state sold 750 acres of the park to a private development company called Pointe Vista in 2008. Pointe Vista demolished the park’s lodge, and closed the golf course. The operators of an arcade and riding stables left.

“I don’t think they’re going to do anything with it, personally,” Stauffer says. “It’s been eight years, and they haven’t even started. So I don’t have much faith that they’re going to.”

Stauffer is manning the register at a bait and tackle shop on Main Street in Kingston, just a couple of ancient — but occupied — buildings down from the town’s only streetlight. He says when all those park-related attractions left, so did a lot of the bait shop’s business.

“Without people staying there, I’d say we’ve lost 30 to 40 percent most years,” Stauffer says. “Those first 3 or 4 years after they tore the lodge down, we were basically just breaking even.” 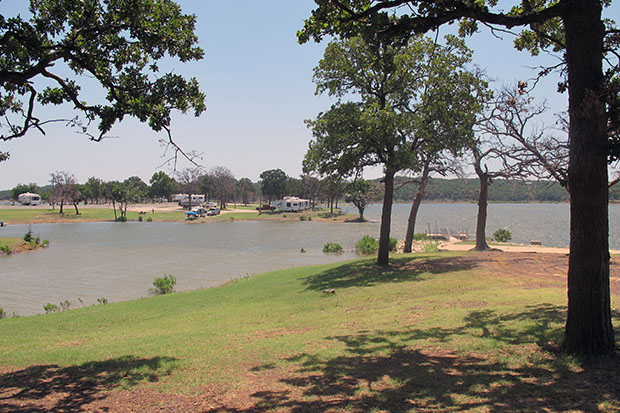 A campground at Lake Texoma State Park is dotted with campers, even on a weekday morning.

It was an experiment in privatization. Texoma State Park was prime real estate on this large, beautiful lake near the midpoint between between Dallas and Oklahoma City. In exchange for a selling a big chunk of the park, with its outdated lodge and millions of dollars in maintenance backlogs, the state got nearly $15 million. Also, Pointe Vista promised to build a lakeside paradise of hotels, condos and restaurants.

Pointe Vista COO Scott Fischer in a 2010 video update on the Texoma project touted plans for hundreds of residential lots, a $750 million dollar master-planned community with a hotel and conference center. But those grand ideas still haven’t been realized. Eventually, the state Commissioners of the Land office sued Pointe Vista to start doing what they promised, or return the land to the state.

The case was settled in May, and here’s what the state agreed to: Pointe Vista gets to keep all the land it originally bought, except for 50 acres, which the state is buying back for about $4 million dollars with the idea of selling it to a third party that will put a hotel there, according to The Oklahoman. The original deal required Pointe Vista to develop certain projects on established deadlines, but the new settlement doesn’t put any restrictions on what the company can do with the land, even selling it.

Boyd Steele lives on the edge of the park and was part of a failed lawsuit to stop the original sale.

“I was president of the Friends of Lake Texoma, a group trying to get the park restored,” Steele says. “No one would listen. All these people around here, all they could see was honey and milk. But I told them it’s not going to happen.”

He says the recent settlement is too favorable for Pointe Vista. It doesn’t make any sense to him.

“There’s something wrong with that picture,” Steele says. “There’s a skunk in the woodpile somewhere.” 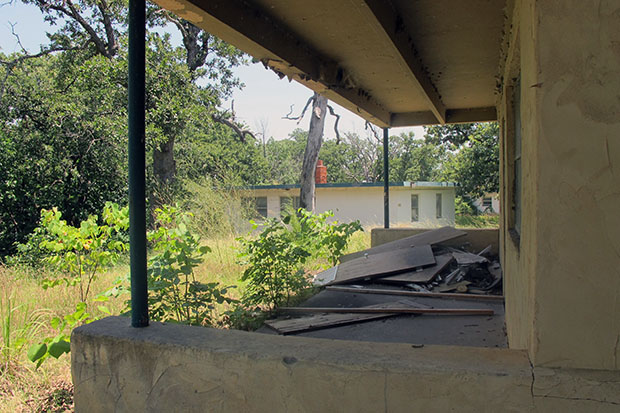 The crumbling remnants of state park buildings that haven't been in use for years.

The known details about the settlement come from a September 2015 press release from Governor Mary Fallin’s office. I emailed Fallin, and the Commissioners of the Land Office to find out why they agreed to the deal, and got an email from Fallin’s office saying the state’s goal is still to bring beneficial development to the area’s economy.

And Brent Gooden, with the public relations firm that represents Pointe Vista, says he’s pleased with the settlement, and the company can now focus on future development opportunities, though there aren’t any specific plans right now.