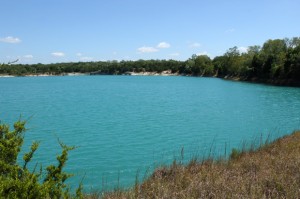 A quarry near Ada filled with water from the Arbuckle-Simpson Aquifer.

The Oklahoma Department of Environmental Quality has ordered city officials in Ada to make a series of fixes to ensure the community has clean drinking water after 2,000 gallons of diesel spilled on the ground near city water wells in April of 2015.

DEQ’s orders include stricter sampling, testing and monitoring of wells, the construction of barriers to guard against spills and requiring the city to find an alternative source of drinking water if the wells aren’t usable, the Ada News’ Eric Swanson reports:

The area of the spill was over the Arbuckle-Simpson Aquifer, which is the main water source for several towns in south-central Oklahoma. The aquifer is also the source of Byrd’s Mill Spring, which is Ada’s main source of drinking waters.

Ada’s long-term cleanup plans include “deeper, longer casings” on three of the wells, “which have been offline since the spill was discovered,” and the city is drilling a fourth, supplemental well, Swanson reports:

The city allegedly violated state environmental regulations by placing wastes in an area where they were likely to cause pollution, DEQ said in the administrative consent order.

“Specifically, the release of diesel into the ground at the well field site and to the Arbuckle-Simpson Aquifer, a sensitive sole source groundwater basin and public water supply, has caused pollution and is a public nuisance,” the agency said.