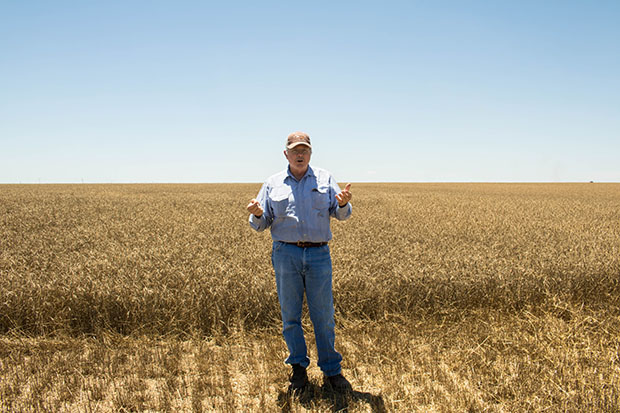 Wheat farmer Fred Schmedt stands in one of his family's fields south of Altus, Okla.

Heavy rains delayed the 2016 wheat harvest in Oklahoma, but the yield could be better than recent years. Many farmers, however, are still making up losses from a drought that climatologists warn could be returning.

It’s a hot, dry and relatively windless day south of Altus in southwest Oklahoma. Eight to 11 inches of rain has fallen in the area over the last few weeks, and Fred Schmedt is on his cell phone trying to keep large trucks and tractor-trailers off his field.

Heavy vehicles plus soggy soil equals rock-hard, compacted dirt that won’t grow wheat. The amount of rainfall is crucial for Oklahoma wheat farmers like the Schmedt family, but the timing of the rain is a big factor, too.

“This crop has gone through a nice condition to start, got too wet, got too dry, and then has finished off way too wet,” Schmedt says.

It’s probably too wet for the team of combines Schmedt is watching as they make passes through one of his fields, but he’s happy there’s actually a wheat crop to harvest.

The forecast calls for a break in the wet weather. And in Oklahoma, you have to make hay — and wheat — while the sun shines. 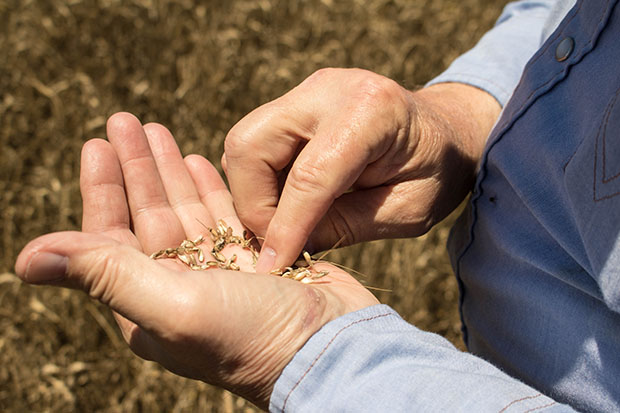 David Marburger, a small grains extension specialist at Oklahoma State University, says farmers around the state have been delayed by soggy fields and rainy weather, but the 2016 harvest is coming along.

“We’re seeing a lot of combines rolling around, which is really good,” Marburger says in an interview from the field near Walters, Okla., where he was surveying progress.

It’s too early to say for sure, but Marburger is optimistic Oklahoma’s total haul will be better than last year’s.

Back near Altus, Fred Schmedt and his brother Wayne are watching a combine start work on a new section. They’re also keeping a watchful eye out on that tractor-trailer driver they’re trying to keep off the wet field.

“We want him to park it out here on the pavement,” says Wayne Schmedt. “Hopefully we’re successful in our negotiation skills,” he adds, laughing.

Down the road, Wayne squats, grabs a handful of soil and squeezes. “It’s pretty soft still,” he says. “That’s really way muddier than we would like. We’d normally like that to just crumble.”

StateImpact interviewed the Schmedt brothers in this same field two years ago, during a drought that wiped out wheat crops statewide.

On average, Oklahoma farmers produce about 100 million bushels of wheat a year. In 2014, the total was less than half that: 47.6 million bushels, data from the U.S. Department of Agriculture show.

Things improved in 2015 with an annual total of 98.8 million bushels, but, like this year, the rains were too much too late for a lot of farmers, like the Schmedts.

Oklahoma’s weather is tied to the temperature of the water in the Atlantic and Pacific Oceans. Climatologists are concerned that those temperature patterns — apparent in meteorological phenomenon known as the Pacific Decadal and Atlantic Multi-decadal oscillations — are setting up to look a lot like they did in 2010, when the most recent drought started. 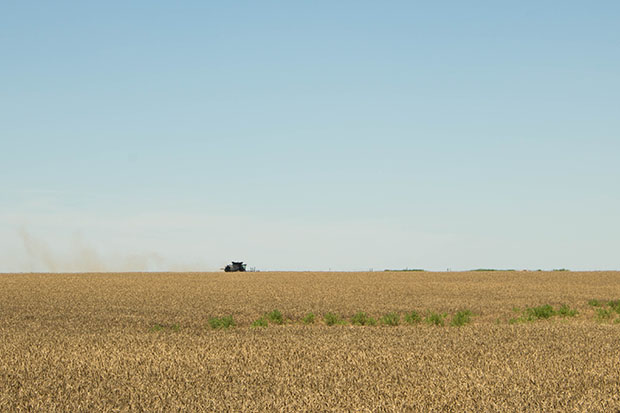 A combine harvesting a wheat field south of Altus, Okla.

‘Killer on the field’

Fred and Wayne Schmedt cringe as a worker towing a grain cart with a large tractor races across their wet, spongy field.

If they had to choose, the Schmedts would take flooded pastures over drought. The damage from the heavy vehicles will linger for years, but it’s worth it. That tractor sped by because the combine needed to unload — again.

The brothers are focused on the wheat harvest, and haven’t paid too much attention to early warnings from scientists about drought on the horizon.

But when this year’s harvest is over, the brothers say they’re going to diversify by planting a field of guar — a legume that’s very drought-tolerant.