Mason Bolay on his family's farm near Perry in north-central Oklahoma. 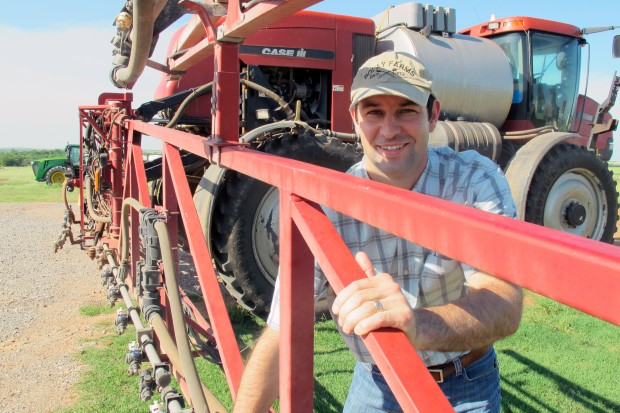 Mason Bolay on his family's farm near Perry in north-central Oklahoma.

After one of the driest periods on record, 2015 was the wettest year ever in Oklahoma, and the rain still hasn’t let up. But scientists say climate conditions are aligning in a way that could bring drought back to the state.

Mason Bolay doesn’t have a lot of time to talk about whether he’s prepared for the next drought. He needs to finish the daily work on his family’s farm outside Perry in north-central Oklahoma before the next thunderstorm moves in.

“In agriculture we’ve got to be prepared for anything and whatever Mother Nature sends our way,” Bolay says. “To say if I’m mentally prepared? I guess we could get there, but as far as commodities and inventory, yes, we will be prepared for that.”

“We’re still seeing some of those effects in some of our hay meadows and pastures where they were pushed a little too hard,” Bolay says. “That native grass just doesn’t recover quickly.”

Farmers are limited in what they can do to get ready for future droughts that may or may not come.

“There’s only so much hay storage that you can have. Hay’s only going to be able to sit outside for so long. You can’t hold grain and wait for a drought for whenever grains go back up,” Bolay says. “You have to try to mitigate the situation as it comes.”

There’s no way to be sure what the situation will be in the months and years ahead, but some signs are giving us hints, and scientists are worried.

“It does certainly appear that La Niña is coming,” State Climatologist Gary McManus says. “And with that will be an increased chance of below normal precipitation and possibly above normal temperatures as we go through the next cool season.”

La Niña is the opposite of El Niño. They’re kind of the yin and yang of water temperatures in the Pacific Ocean off the coast of South America. El Niño happens when the water’s warm; it generally means wetter weather from fall to early spring in Oklahoma.

When the water cools we get La Niña and less precipitation. Oklahoma is currently coming out of one of the strongest El Niños ever, and it helped end the crippling, five-year drought last year.

“[El Niño] lasted throughout the summer, a little bit uncharacteristic of these phenomena,” McManus says. “And then it strengthened once again as we got into the fall and winter, and then it’s declined rapidly until now it’s basically faded away for the most part.”

Scientists are confident La Niña is coming later this year, but they don’t know how strong it will be, or how long it will last. And the El Niño-La Niña cycle is actually pretty small in scale compared to the larger oceanic temperature patterns that can affect Oklahoma’s weather.

“The Pacific Decadal Oscillation — PDO — is sort of the governing state of the Pacific that determines whether we’re in an extended period of El Niños or La Niñas,” McManus says.

When the PDO is in its warm phase, we see lots of El Niños and more rain. When it’s cool, more La Niñas.

The Atlantic Oscillation is reversed. When it’s cool, Oklahoma’s wetter. When it’s warm, we’re drier. We can look at these cycles and get an idea about the weather in the future. Climatologists like McManus are concerned because the current situation looks pretty similar to six years ago, when the five-year drought began.

McManus says the Pacific could be going back into a cool phase after the temporary warm up associated with the past year’s strong El Niño. The Atlantic is still in a warm phase and a La Niña is expected, which we also had in 2010.

For now, though, it’s still raining at Mason Bolay’s farm.

“We’ve always said nothing too good or too bad lasts too long,” Bolay says.

And, for the time being, he’s not sweating it. Nothing is certain when it comes to forecasting the weather.