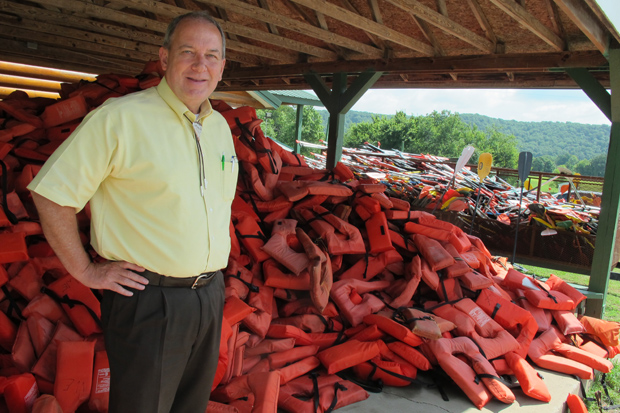 Oklahoma Scenic Rivers Commission's Fite next to a mountain of life vests at the War Eagle Resort near Tahlequah, Okla.

Come July 1, the Oklahoma Scenic Rivers Commission will be no more.

Gov. Mary Fallin on May 11 signed a bill disbanding the small state agency, transferring its mission — and employees — to the Grand River Dam Authority, which now takes on the Commission’s role of keeping Oklahoma’s six scenic rivers clean and safe for tourists.

“We’re here because of the state’s financial woes,” Fite said. “What is most important is, whatever the name of the organization, whether its OSRC or GRDA, that core mission continues for which there is no endpoint, the protection of our rivers.”

…With an annual operating budget at less than $500,000 and minimal staff and expected further cuts given the state’s dire budget situation, Fite and GRDA Chief Executive Officer Dan Sullivan saw the move as a way to preserve Oklahoma’s mission to preserve its most precious waters and combine those efforts under one roof.

GRDA has increased its work on water quality issues in recent years and initiated public outreach regarding water use and preservation in the Grand River drainage area. Now that role will expand, Sullivan said.

The Scenic Rivers Commission has been dealing with a shrinking budget for several years, and the prospects for 2017 were dire. Fite told StateImpact in April his agency was running on a budget of less than $500,000, with only one full time ranger and maintenance person to help oversee the thousands of tourists that come to float the eastern Oklahoma rivers, particularly the Illinois River, each summer weekend. 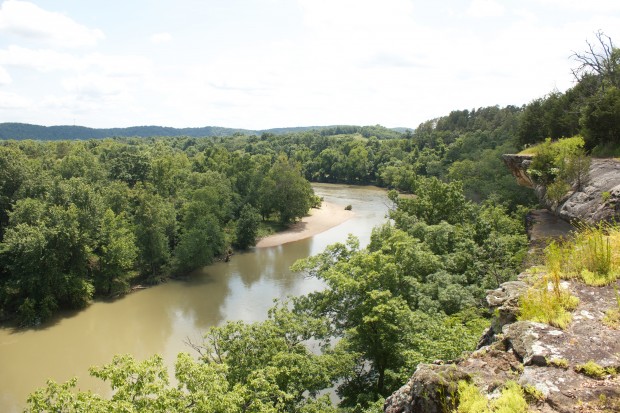 The Illinois River, still murky from rain, in summer 2015.

After that same April meeting of the Commission, GRDA CEO Dan Sullivan told StateImpact someone has to take care of the rivers, and GRDA has the experience it takes.

“I can’t image that they’ve been able to do what they have done on the budget that they have,” Sullivan says.

GRDA is an electric utility, but Sullivan says it already has the responsibility of managing lakes, and controlling the rivers would be similar.

“It’s not something that’s going to be a moneymaker for us in any way, so that’s not the motive at all,” Sullivan says. “But we think that it’s a natural relationship because of the water issues of recreation and law enforcement. There’s a lot of commonality there.”

The GRDA doesn’t rely on state-appropriated funds, so in theory, the effort to preserve the rivers’ natural beauty can continue without the threat of future budget cuts from the state legislature.