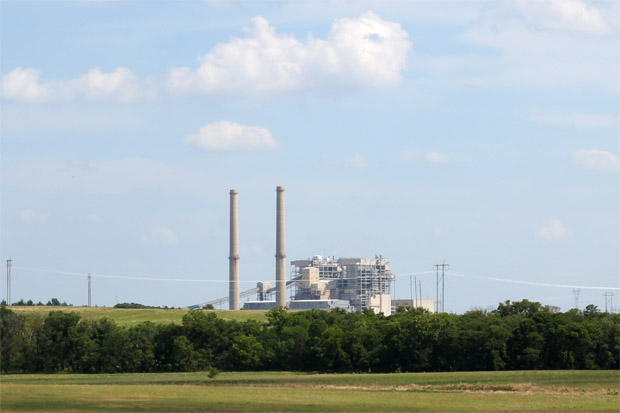 Oklahoma Gas and Electric went before the Oklahoma Corporation Commission again this week to try to get approval for environmental upgrades at its coal-fired power plant in Red Rock, Okla.

The state’s largest utility is running out of time to comply with new federal air quality standards. OG&E’s Sooner Power Plant needs to have air scrubbers installed or be converted to natural gas by January 2019 to comply with the EPA’s Regional Haze Rule.

So far, regulators have twice rejected OG&E’s scrubber plan, which would keep the Sooner units running on coal at a cost of $500 million dollars.

“This is about preserving fuel diversity,” said Kimber Shoop, an attorney for OG&E. He said OG&E’s plan to install a $500 million scrubber upgrade at the Sooner plant near Red Rock would ensure the utility’s customers get the benefits of low-price coal for another 30 years.

The scrubbers are half of OG&E’s “scrub/convert” plan to meet lower sulfur dioxide emissions under regional haze rules. The utility plans to convert two of three coal units at its Muskogee plant to natural gas. OG&E said if it can’t get approval for the Sooner coal scrubber project, it would likely convert the two coal units to natural gas. If regulators grant scrubber approval, the utility would come back after the project is built to add the costs to customer bills.

The new case before the Oklahoma Corporation Commission comes as even more pressure is being put on OG&E to switch the Sooner Plant to natural gas.  Natural gas prices are low, and the industry trend is away from coal and toward cleaner forms of energy.

OG&E says it needs a decision from the commission by early May to get the scrubbers installed in time.