Donna McFadden in her closed convenience store along the north shore of Sardis Lake in southeastern Oklahoma. 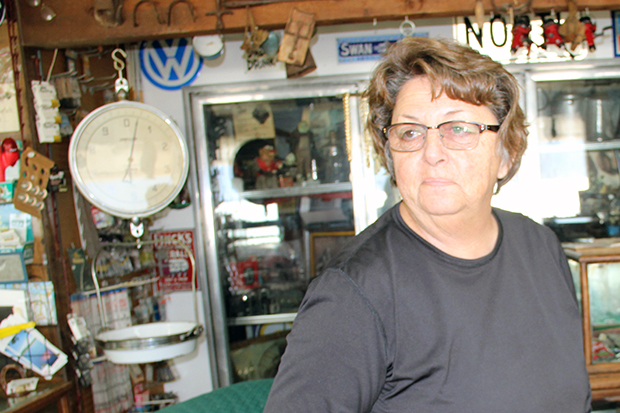 Donna McFadden in her closed convenience store along the north shore of Sardis Lake in southeastern Oklahoma.

Oklahoma’s lakes drive millions of dollars of tourism to otherwise impoverished parts of the state. But the local economy around Sardis Lake is missing out because of uncertainty about the water’s future.

‘Did you see anybody?’

Sardis Lake is beautiful, filling a valley surrounded by the Potato Hills on a tributary of the Kiamichi River. It’s one of the best bass fishing lakes around. But there are no bustling hotels, restaurants, or marinas on the shore. Instead you’ll find Donna McFadden’s small, dusty bait shop near Narrows Point. It’s been closed for a decade.

“The lakes were built with taxpayers dollars. We didn’t get to use them,” McFadden says. “We could throw a rock and hit that water but we had to haul water for our minnows, everything.”

McFadden was a leader in the push to get a rural water system built for the Sardis Lake area in the 1990s. Before that, many homes and businesses near the lake didn’t have running water, including McFadden’s own bait shop.

Sardis Lake is a popular tourist destination, but there’s really nowhere to spend any money here.

Visitors often have to travel 20 miles to Talihina to find a motel, and there are few gas stations on the south side of the lake. The crumbling road along the lake’s north side is dotted with collapsing barns and rotting, long-abandoned homes.

Sardis Lake is in a remote part of southeastern Oklahoma. People here think private development has been stifled by something businesses hate — uncertainty. The state has considered selling Sardis water to Texas, and Oklahoma City has claimed the water as its own after paying the lake’s overdue construction costs. An ongoing lawsuit with the Choctaw and Chickasaw nations over control of the water muddies the situation. This lake’s future has never been clear.

“I tell you another example of the stunted growth. Sardis Lake was completed in 1982 and they tried and took them 20 years to get a rural water district where they could take water out of the lake,” petroleum scientist and fiery southeast Oklahoma water advocate Bob Jackman says.

Nearly half of those under the age of 18 live below the poverty line in Pushmataha County, where Sardis is located. And the per capita income is only about $20,000 a year. Jackman says cultivating the recreation and tourism industry would be a much needed boost for southeast Oklahoma, but uncertainty over the water fight is holding the area back. 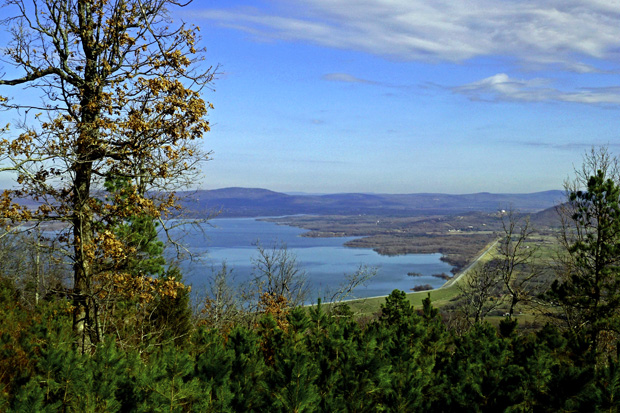 Sardis Lake is at the heart of the dispute over who controls water across southeast Oklahoma.

“There’s a name for these lakes. We call them yo-yo lakes,” Jackman says. “Recreational marinas won’t develop where they know lake levels are subject to extreme fluctuation. If it’s a drought in the Oklahoma City area and they need water, those lake levels will go down in a matter of weeks.”

Not every other lake in Oklahoma has resorts and golf courses along its shore, but the people here think Sardis is something special, and would be an economic engine for the area if private developers were sure the water wasn’t going anywhere.

The tribal water lawsuit has been going on for five years, with no end to the negotiations in sight. Donna McFadden, the bait store owner, wants the Kiamichi River to gain scenic river status and be protected for recreational use. But Jackman thinks it will be a while before there’s any resolution.

“If southeast Oklahoma develops better and stronger political clout for the people of that region, then the scales may tip more in their direction,” Jackman says. “But, I’m afraid there’s going to be considerable years here before there’s any decisions made legally.”

There are no plans to add another watershed to the list of Oklahoma’s scenic rivers, state water officials say, and it would be tough to out-clout a very thirsty Oklahoma City.