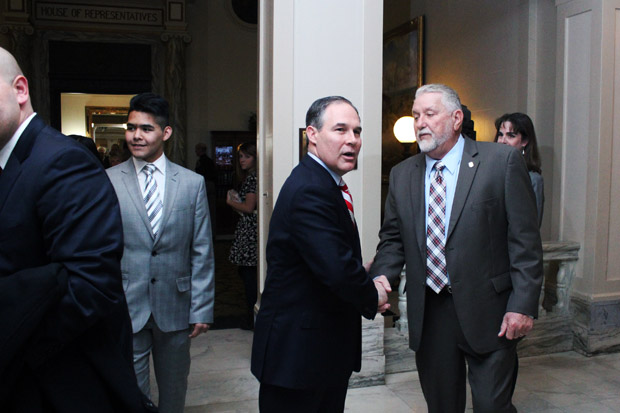 The Clean Power Plan — President Barack Obama’s push to reduce carbon dioxide emissions from power plants — won’t be implemented until after a lawsuit from 27 states, including Oklahoma, is resolved.

The U.S. Supreme Court put a stay on the plan and a federal appeals court will hear arguments in the case later this year. Opponents say the Clean Power Plan is an example of federal government overreach, but supporters say the goal of reducing carbon emissions from coal-fired power plants by 30 percent by 2030 is an important step toward addressing climate change.

Oklahoma Attorney General Scott Pruitt said granting the stay gives states some clarity. His office joined in the stay appeal on behalf of Oklahoma and the Department of Environmental Quality.

“They can sit back, take a breath and let the legal process work,” Pruitt said Tuesday. “I think at the end of the day, the Supreme Court has indicated that we’re going to win on the merits, as well. It’s a huge step, and something that illustrates how seriously the Supreme Court is taking these types of issues.”

Environmental groups from the Natural Resources Defense Council to the Sierra Club decried the stay and expressed confidence the plan would eventually be approved by the courts.

Even though Oklahoma is involved in the case against the EPA, the Clean Power Plan would likely have little impact on the state, as StateImpact has reported. Previous federal air quality rules like the Regional Haze Rule have already put Oklahoma’s largest electric utilities on a path to cut emissions by nearly 30 percent.