A Conversation With U.S. Sen. Jim Inhofe About the Paris Climate Conference 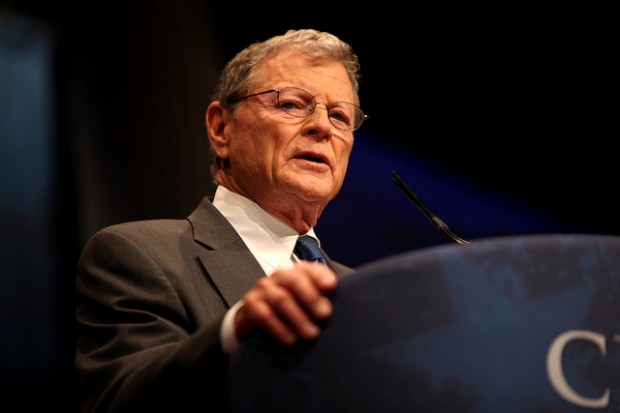 World leaders are acknowledging their countries’ contributions to climate change, and are making commitments to improve the environment. But there’s an army of Republicans pushing against Obama’s Paris plan, and U.S. Sen. Jim Inhofe of Oklahoma is one of its generals.

The state’s senior U.S. senator is chairman of the powerful Committee on Environment and Public Works, which oversees agencies central to any plan to cut carbon emissions. Inhofe is also a high-profile doubter of mainstream climate science who wrote a 2012 book calling global warming a conspiratorial hoax.

StateImpact recently spoke to Inhofe about the Paris climate talks. We’ve condensed the conversation into a longer-form Q&A, which has been edited for clarity and length.

Joe Wertz: In your testimony and conversations at the Committee for Environment and Public Works, you’ve criticized the Obama administration for not explaining to you and other senators the details of the plans they’re discussing in Paris.

U.S. Sen. Jim Inhofe, R-Oklahoma: He came out with this thing saying, ‘We are going to commit the United States of America to a 26 to 28 percent reduction in emissions by 2025.’ So we said, ‘All right. How are you going to do it?’ Well he didn’t have any answer. So then we put it in writing. Then we contacted all of his people and his EPA.

We told them we wanted to have them to come up as witnesses and, for the first time in the years I’ve been serving in the House and the Senate, we were denied that by the very bureaucracy that we have jurisdiction over.

A: No. It’s worse than that. When the Obama administration is in Paris, they  are going to tell them the U.S. is committing that we will have this 28 percent reduction. They know that they can’t do that, so they’re lying to them. They’re lying to 192 countries.

The whole idea of global warming was all started with the United Nations. I assumed, back when they first started talking about this in 1997, that this must be true because everybody said it was true. Until we found out the costs that would be involved and so we started looking into the science. One of the scientists early on that I talked to was Richard Lindzen with the Massachusetts Institute of Technology. He’s considered to be by many people the top climate scientist in America. He said there’s no truth to this at all. We’ve had 20-year cycles now certainly since 1895, where it’s warmer, then it’s cooler, then it’s warmer, then it’s cooler. You can almost set your watch by it. We found out that this is no different than the global warming that they were complaining about back in 1918.

Once I mentioned something on the Senate floor about that, we started getting phone calls from scientists — not just the United States, but all over the world — saying that the science is not settled.

Q: The U.S. likes to be a leader on pretty much every front — and certainly in any big international consortium — I’m wondering why the U.S. shouldn’t be a leader when it comes to climate change and the environment.

Q: I’m not assuming the world is coming to an end. I think there’s a lot of science to say human-involved, industrial-triggered climate change is real and something to be concerned about.

A: But there’s a lot of science that says it isn’t. I know there are a lot of scientists that are credible scientists who believe it’s real. A lot of credible scientists believe it’s not real. The one thing that we do know is the cost would be hundreds of billions of dollars. What we’re saying is the people — not the bureaucrats who are unelected — but the people who are elected who have studied the cost of this are the ones who are are questioning the science on it. The science is not settled. I think the way you are asking your questions you assume that the science is settled.

Q: You make a lot of policy decisions and certainly have a lot of policy influence. You look at science and research. A lot of what you do is bring in the experts and hear what they have to say and use that information to guide you in making decisions. I’m wondering what evidence would change your mind?

A: Well the evidence is not there yet. One thing is for certain is the science is not settled.

But you know what we’re doing? Since 2005, our C02 emissions have fallen by 13 percent in the United States. Whether that’s good or bad is not the discussion here, it’s the fact that it’s happened. At the same time, China’s emissions have grown by 69 percent. India’s have grown by 53 percent. We are reducing emissions in this country, they’re increasing emissions in those countries. Ours is such a small amount that it doesn’t really make much difference.

China is licking their lips hoping that we will do something to restrict emissions in the United States. They figure they’ll get a lot of our manufacturing base if that happens.

Q: Why does it matter if China is a worse polluter on the global stage than the U.S. if climate change isn’t real or the science on it isn’t settled.

A: In the event [the Obama administration] is successful, they have us joining into something that is going to cost our taxpayers between $300 billion and $400 billion a year, and yet we restrict [U.S. emissions] — that would be a fraction of 1 percent of what China is already doing. It’s not going to have the effect of having any success in the reduction of emissions.

Q: Can any good come out of the Paris climate talks? Are you hoping for anything?

A: Well, I don’t know. They’re there for a single purpose. It’s not to talk about [the Nov. 13 shootings in Paris], it’s not to talk about what they should be talking about and that is, how do you keep Iran from having something that will blow up an American city, when our intelligence tells us that they very likely might have it now? Or North Korea. This is what they ought to be talking about, but they’re not.

They’re going over there to talk about one thing: Emissions of C02 worldwide. Their mission to go over there  is to force some kind of mandatory program that now even our Secretary of State says is not going to be binding on the United States.

Q: What do you think Oklahomans should watch for in all the news coming out of the Paris climate conference?

A: If we pass the President’s regulations — he knows he can’t pass legislation, so he’s doing it through regulation — it’s going to have the effect of costing each family in my state of Oklahoma, the families that pay federal income taxes, an average of $3,000 a year. And what do you get if they end up doing that? You still get something that is not going to reduce emissions, if that’s what you’re wanting.

What they’re trying to do is not going to reduce emissions, but the cost will be there. That’s a huge thing. I like to deal with the things that are certain. Science is not certain, but what is certain is the fact that if we were to pass something through regulation or through legislation, it hurts the poor people worse. The people who spend the largest percentage of their income on heating their homes — they’re the ones who are going to be hurt on this.

Q: You spend a lot of time in your committee conferences and other venues talking about the EPA and what you see as the overreach of that agency. But you haven’t always had it out for the EPA. You’ve thought, in the past, that the agency has done a lot of good. When did that change?

A: No. Actually, when the amendments to the Clean Air Act came in 1990, I was a major [supporter] of that. It had a tremendous, positive effect in terms of cleaning up real pollution in America. We have twice as many cars driving right now and we have half the emissions. It’s  been successful, and that was done through the EPA.

It was only when it is stacked with people who really want government to be in control of more and more of our lives that we’ve had problems. Look at the regulations now coming from the EPA: Waters of the United States — If you talk to the agricultural people and ask [them] what the most serious problem that our farmers in America are facing ,[they] will say it’s the fact that the federal government is trying to pass a rule to take the jurisdiction over the waters in the state of Oklahoma and throughout America out from under the states and put it in the federal government. That would be an absolute disaster to our farmers and our ranchers throughout America.

Talk to anyone who’s producing something or manufacturing something. They’ll say these regulations are killing them. These are regulations that are making us non-competitive in the United States, and that didn’t happen before.

Q: There weren’t complaints from industry and others when the Clean Air Act amendments were being debated that those regulations would be jobs-killing and economic-smothering?

A: No, not really. The proof of that is we passed it. We passed it with people like me as strong co-sponsors. That’s totally different than what we’re faced with today. I spent a career in the real world and so I know what over-regulation is, what it costs and how punitive it is — and I know how it makes us non-competitive.

Q: When you talk to constituents in Oklahoma, do you get the sense that they’re paying attention to the Paris climate conference?

A: When I go around the state… and I’m out in Shattuck, Oklahoma, I can assure you they don’t care anything about the world coming to an end. They’re more concerned about the fact that the Republicans have been trying to do away with the death tax. They’re upset because they’re losing their farms.

The vast majority of people I talk to want to have their Second Amendment rights, they don’t want Obama to be successful in all his efforts to have gun controls. People in Oklahoma want a strong national defense and they are very upset with what’s happened to our military under this administration.

My answer to your question: It very rarely comes up as an issue, but the things I mentioned always come up.