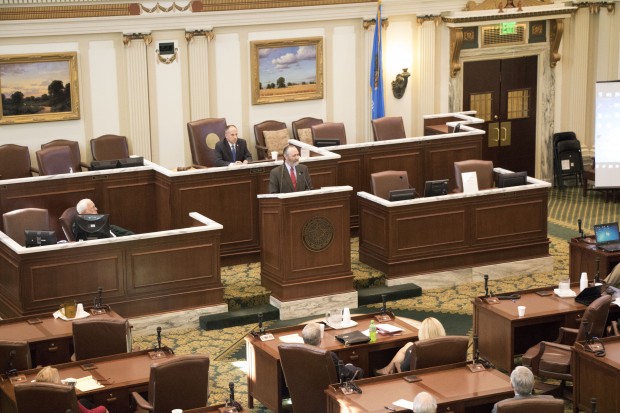 This spring, Oklahoma faced a problem it hadn’t in a while: too much water. Much of that floodwater flowed into rivers and out of Oklahoma — and that’s sparking big new ideas at the state capitol, and rousing an old fight.

Oklahoma City pumps water to Lake Stanley Draper along the 100 mile long Atoka Pipeline. The water comes from poverty-stricken but water-rich southeast Oklahoma, where water drives the tourism industry. The pipeline helps quench the needs of the thirsty metro, but it also fuels the fight between those who have water and those who don’t. So when the group Oklahomans for Responsible Water Policy heard about a legislative study called ‘Drought and the Redistribution of Water’ at its annual meeting, speaker Jerry Ellis, a former state senator, fumed.

“Why do you think Representative Doug Cox requested this interim study? He has one year left. He’s not going to face the voters again,” Ellis told the crowd.

Adding to the anxiety, the legislative study coincides with a potential change in the powerful Oklahoma Farm Bureau’s position on selling water out of state. In the past, Farm Bureau has been against the idea, but VP of Public Policy John Collison says it’s time to reconsider, and thinks the potential exists beyond Texas.

“Maybe it’s to California. Maybe it’s to New Mexico,” Collison told StateImpact. “If we have an excess amount of water — and that’s to be studied down the road and looked at — if we do have an excess amount of water, why wouldn’t we sell it? We sell our oil and gas. We sell our excess wind. We sell our excess resources all the time. Why are we not looking at selling excess water to fund water infrastructure?“

Farm Bureau would love to see more pipelines bringing water to farmers and communities in western Oklahoma. President Tom Buchanan made that clear during the study on Monday.

That kind of talk worries Russell Doughty with Oklahomans for Responsible water policy. He knows how important tourism is for his part of the state. 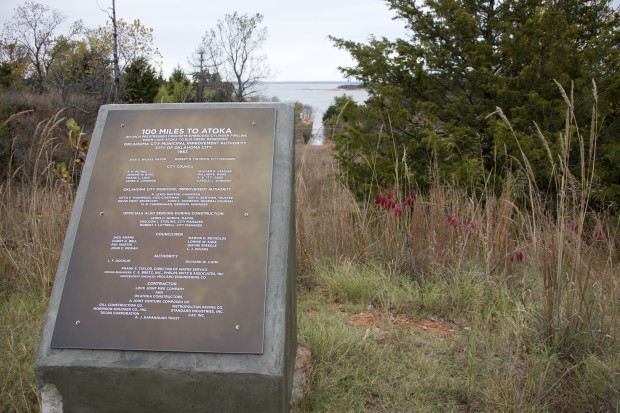 A plaque at the end of the Atoka Pipeline, where it meets Lake Stanley Draper.

Farm Bureau might call water used for boating, fishing, and swimming ‘excess water,’ and push for it to be piped west. That fight continues. But that’s not the water Farm Bureau is talking about right now, or that Representative Doug Cox had in mind to sell when he proposed this study.

“I’ve lived on Grand Lake for 34 years, and I stand on that spillway and watch that water racing over it, and thinking we’re not making electricity with it. We’re not using it for industrial use. It’s just waste,” Cox said at the beginning of the study.

Cox, a Republican from Grove, envisions a much more grandiose, and some would say outlandish idea to solve Oklahoma’s water problems for good: Capture the water that dams release when it rains too much, store it, and sell it to help fund the construction of a network of water pipelines crisscrossing the state.

“The solution is to create a central treatment and distribution network using that excess eastern Oklahoma water, so that we can get economies of scale to hold down costs and relieve local communities of the increasing burden and expense of treating the water locally,” Cox says.

The idea has merit, and wouldn’t touch water used for recreation. But the list of problems with it goes on and on. Water only flows over spillways occasionally. How would we store this excess water?

“I was thinking along the lines of tank storage, the concept of a tank farm for water similar to the tank farms we have in Cushing for oil,” Cox says.

Tank farms. New lakes. Pumping water into depleted aquifers for storage. And, Oklahoma has agreements with other states like Texas and Arkansas to let certain amounts of water flow naturally across the border.

But the biggest problem — water infrastructure is massively expensive. And the scale of Cox’s idea is huge. There are plans to replace the Atoka Pipeline with a new one. The cost for just that one pipeline project: more than $1 billion.