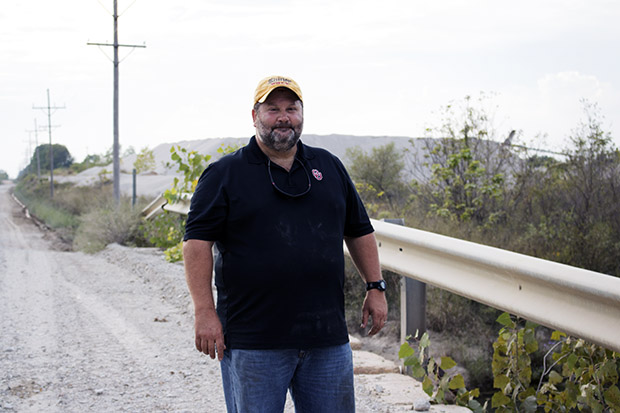 University of Oklahoma professor Bob Nairn stands on a bridge overlooking Tar Creek, which is contaminated with arsenic, cadmium, iron, lead and zinc from decades of mining.

The Tri-State Mining District in northeastern Oklahoma’s Ottawa County was once the world’s largest source of lead and zinc. The mines had closed by the 1970s, but pernicious pollution still plagues what is now known as the Tar Creek superfund site.

“You read anecdotal accounts of the number of bars and restaurants and stuff like that,” says Bob Nairn, a professor at the University of Oklahoma and the director of the Center for Restoration of Ecosystems and Watersheds. “It was a booming place to be in those mining days.”

More than 11,000 men worked the mines during peak production in the 1920s. They produced about half the lead and zinc needed in World War I, and were the lifeblood of small Oklahoma towns like Cardin, Commerce and Picher.

“To a certain degree, it’s been forgotten in a lot of ways,” Nairn says. “But the history here is really interesting, really outstanding. And the local folks are proud of it — and they should be — of that industrial heritage.” 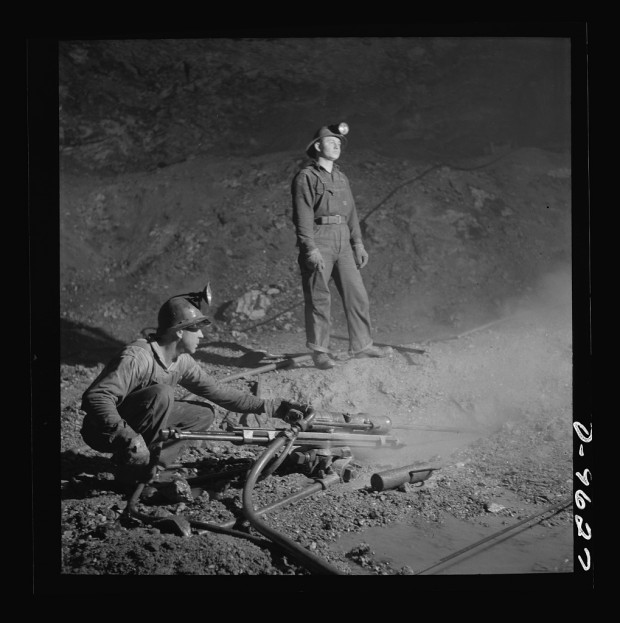 Blast hole drillers at a zinc mine of the Eagle-Picher Company near Cardin, Okla., in 1943.

Much of that industrial history won’t fade for decades. In 1983, the Tar Creek district was declared a national hazardous waste priority. The mining left hills of toxic, moon-colored waste, called chat, that are as tall as 15-story buildings. Elevated levels of lead were found in children, fish, birds and plants.

“It’s a huge superfund site, it’s going to take a long time to get it fully cleaned up,” says Dustin Davidson, an environmental programs manager with the Oklahoma Department of Environmental Quality. 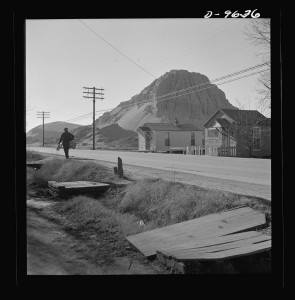 A mountain of waste rock grows steadily outside a zinc concentrator near Cardin, Okla., in 1943.

A coalition of local, federal and tribal governments have a hand in the Tar Creek cleanup. A new five-year progress report due this week highlights progress and ongoing challenges at the site. Lead levels in children have dropped. Residents took government buyouts and moved. Water wells were plugged and thousands of properties have been remediated.

“I think that we have a good grasp of the problems at Tar Creek,” says Davidson. But, he says, “There’s always potential unknowns when you’re working on a superfund site.”

Bad Water for a Long Time

Water pollution is a long-term hazard at Tar Creek. Runoff from the chat piles picks up harmful metals and leeches into the soil, where it can affect various water sources.

But contaminated groundwater poses a longer term hazard, Nairn says. When the lead and zinc mines were abandoned and their pumps switched off, the caverns filled with water that soaked up harmful metals. 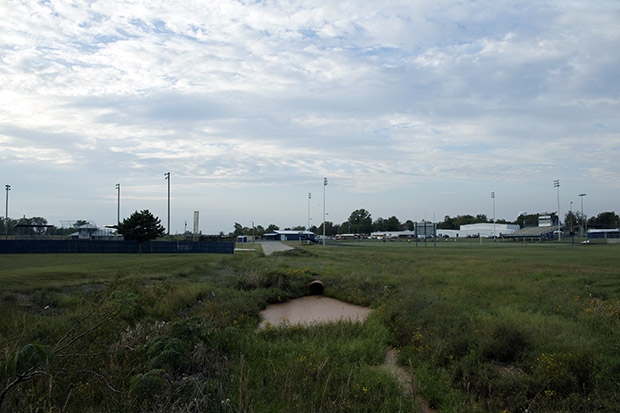 Toxic mine water flows between the baseball field and football field at the high school in Commerce, Okla.

“All of these discharges contained elevated iron. That’s the orange color that everybody sees,” says Nairn. “But what they don’t see are elevated zinc, cadmium, lead, arsenic.”

Roughly 32 billion gallons of toxic mine water — a small lakes’ worth — is steadily gurgling to the surface and flowing into streams and creeks. The toxic spring could flow for centuries, Nairn says.

“We’re going to have bad water coming out of the ground for a long time.”

To tackle the massive Tar Creek cleanup, the effort was divided into five separate projects. They’re unique, but each involves potential water pollution. Thirty years ago, the contamination from the growing pool of mine water was deemed too broken and too expensive to fix.

“The Record of Decision on surface and groundwaters says that the waters were irretrievably damaged and not a whole lot was done to improve those waters,” Nairn says.

Researchers have made a lot of progress since then. Nairn started researching Tar Creek’s water contamination in the mid-’90s. Seeded with $3 million of funding, Nairn’s team designed a passive water treatment system that was built in 2008.

The system looks like a field of slimy ponds near the small town of Commerce, but Nairn says there’s a lot of science below the scummy surface. The system uses a combination of microbes, oxygen, gravity, rocks and wetlands to improve the mine water discharge.

“The whole idea is to create the right conditions for natural processes to happen that will improve water quality,” Nairn says. 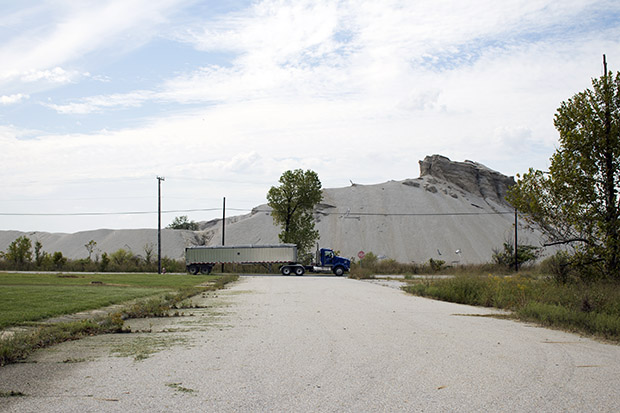 A tractor-trailer passes by a mountain of moon-colored mining waste, called chat, near the former town of Picher, Okla.

Cleanup at the Tar Creek superfund site will take decades. The environment may never be completely restored. The United States needed the lead and zinc from this land to fight two world wars. That’s why Nairn says the whole country has a stake in making sure every possible tool is used to clean up Tar Creek — and other polluted sites like it.

“Saying that we can’t fix the problem is troubling on multiple levels, to me, as a scientist — as a citizen,” he says.

Clarification: An earlier version of this story referred to the underground mine water as acidic, which was a more relevant characteristic when the mines first filled. Alkalinity is a bigger concern for current mine water discharges.