Oil and Gas Industry Struggles Being Felt Throughout Oklahoma’s Economy 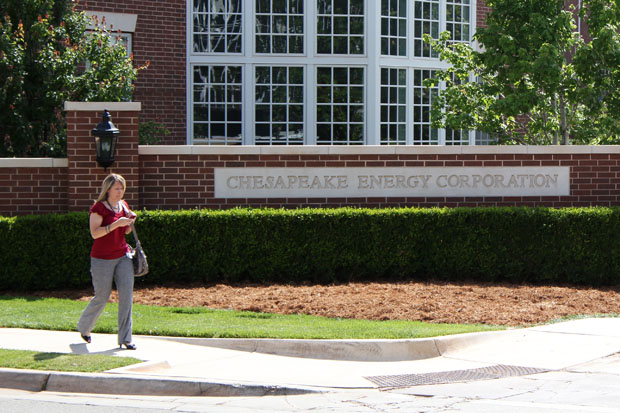 More than 500 Oklahoma employees of Chesapeake Energy are out of a job following the latest layoffs Sept. 29th, as oil prices stay below $50 a barrel. Gasoline is cheap, but that relief at the pump can fuel widespread worry about Oklahoma’s oil and gas-reliant economy.

As the Tulsa World‘s Barbara Hoberock reports, state budget officials recently held an “unprecedented” meeting to discuss what is likely to be a massive budget hole facing lawmakers and agencies in 2016:

Last year, many agencies were cut and their revolving funds were raided to make up for a $611 million budget hole for the current fiscal year.

Finance Secretary Preston Doerflinger said the upcoming fiscal year 2017 budget picture will be at least as bad as 2016 or worse. Budget crafters said they can’t yet put a dollar figure on how big the budget hole might be.

Some are worried the amount could be as high as $1 billion, partly as a result of depressed energy prices.

Falling oil prices have cost Oklahomans’ their jobs, decreased the amount of money the state has to provide services, and — in Oklahoma City — are directly hurting the local community.

As The Oklahoman‘s Steve Lackmeyer and Adam Wilmoth report, Chesapeake’s ability to help its home city has taken a big hit:

Over the past 20 years, Chesapeake Energy’s generosity, both in dollars and employees volunteering their time, has benefited local schools, agencies that assist the homeless, the arts and youth activities, as well as the construction of major community and civic venues.

In a separate story, Wilmoth talked with Chesapeake CEO Doug Lawler, who said the company remains committed to Oklahoma, but has to “react and respond to be as competitive as possible.” Oklahoma City Mayor Mick Cornett told the paper he’s confident people who lost their jobs can find new ones in OKC.