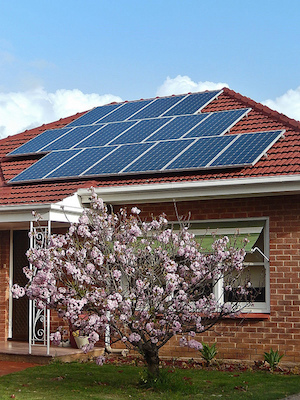 Oklahoma Gas and Electric is proposing a new “demand charge” be levied on customers who install rooftop solar panels or small wind turbines.

The suggested rate structure was filed with the Oklahoma Corporation Commission, which has to approve so-called “distributed generation” tariffs for OG&E and Public Service Co. by the end of the year, The Oklahoman‘s Paul Monies reports. OG&E says the new billing structure will eliminate the “subsidization” of solar customers by traditional customers:

The subsidization issue was one used by OG&E and Public Service Co. of Oklahoma to push for Senate Bill 1456, which passed in 2014.

The utilities said distributed generation customers still rely on the grid for electricity when the sun isn’t shining or the wind isn’t blowing. Under current billing options, some fixed costs are captured in the kilowatt-hour energy charges that vary by customer usage. The utilities claim rooftop solar users aren’t paying their fair share for poles, transformers, transmission lines and other fixed costs at the times of the day when they’re getting most of their electricity from solar generation.

The biggest change for new distributed generation customers will be the demand charge. It is calculated by measuring customer usage in 15-minute increments. A customer’s peak demand on the system in a month would be used to calculate that customer’s demand charge.

The typical residential user has demand ranging from 6 to 8 kilowatts, said Don Rowlett, OG&E’s managing director of regulatory affairs. OG&E’s application puts a demand charge of $2.68 per kilowatt each month. That means most distributed generation users would be paying about $16 of their bill for a demand charge.

The Corporation Commission has not yet set a hearing date on the OG&E tariff and PSO has not yet filed one. Advocates of distributed generation — the growth of which is largely from rooftop solar and not small wind turbines — say OG&E hasn’t demonstrated that the subsidization is real and that the demand charge will block the growth of rooftop solar:

Sanders said The Alliance for Solar Choice was disappointed with OG&E’s filing. She said demand charges erode savings for solar customers and make it harder to predict future rates.

“OG&E is clearly carrying on the wishes of the national utility association, which has fought solar across the country,” Sanders said. “Demand charges are the latest play in the utility playbook.” Sanders said one Arizona utility, Salt River Project, instituted demand charges and saw solar installations fall by 96 percent in their service territory.