Natural gas flares at an oil and gas well in western Oklahoma. 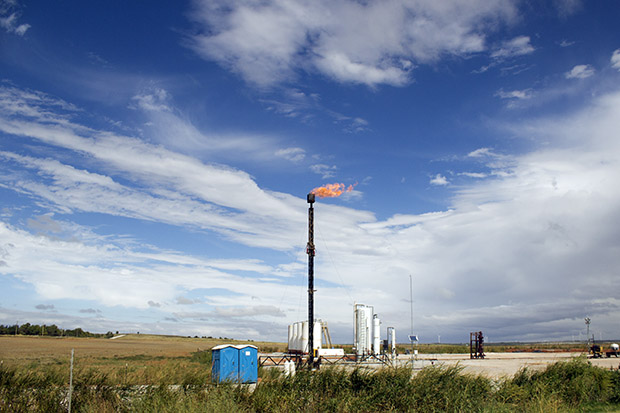 Natural gas flares at an oil and gas well in western Oklahoma.

The Obama administration on Tuesday proposed the first federal limits on methane emissions from the oil and gas industry. The U.S. Environmental Protection Agency wants to cut the methane levels recorded in 2012 by at least 40 percent by 2025.

Methane is the key component of natural gas, and it’s a potent greenhouse pollutant that has more than 25 times the global warming potential of carbon dioxide. About 15,000 new wells could be affected by the rule, which is built around detecting and stopping leaks during fracking, and as natural gas is compressed, pumped and stored.

The methane regulations are part of Obama’s broader climate initiative, which centers on a proposal to cut carbon emissions from power plants. The proposed methane rules will undergo a 60-day public comment period before they’re finalized later in 2016.

“This means that we can continue to accelerate the transition to a clean energy economy by capturing fuel that would otherwise be wasted, while also preventing pollution that harms our climate and the health of our communities and families,” Janet McCabe, the acting assistant administrator for the EPA’s Office of Air and Radiation said Tuesday during a conference call with reporters.

Setting 1st national standards for methane emissions from the oil & gas industry an important move, but not the last: http://t.co/UL7y0Vctzu

The oil and gas industry, for its part, said the regulations are costly and unnecessary because oil companies are already reducing methane emissions.