Gov. Mary Fallin speaking to the media after an earthquake council meeting in August 2015. 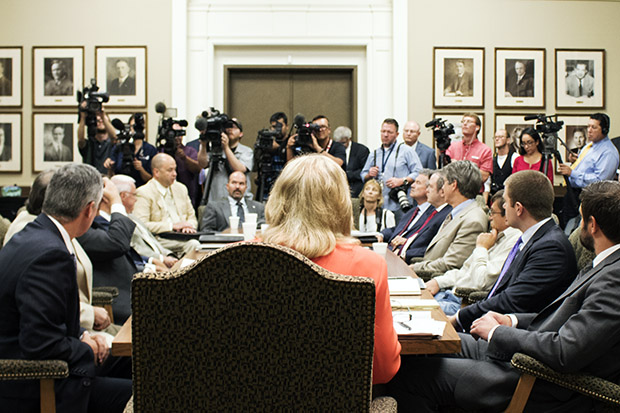 Gov. Mary Fallin speaking to the media after an earthquake council meeting in August 2015.

In the five years since earthquakes first began blitzing Oklahoma, state officials have been hesitant to agree with scientists who blamed the oil and gas industry.

While the shaking doesn’t appear to be slowing, the regulatory response is now quickly ramping up.


When Gov. Mary Fallin talked about the earthquakes a year ago at the 2014 state energy conference, she was circumspect and noncommittal.

“Many have been quick out in the public sector, or even in the private sector, to draw conclusions about its cause,” she said in remarks opening the Oklahoma City event last year

As scientific evidence has mounted, however, the doubt has eroded. Speaking at the state Capitol last week, Fallin publicly agreed with what researchers have said for years.

“I think we all know now that there is a direct correlation between the increase of earthquakes that we’ve seen in Oklahoma with disposal wells,” Fallin said.

Disposal wells are the sewers of the oil field. Oil and gas companies pump them full of waste fluid from drilling and fracking. Once underground, the fluid can build pressure and cause stressed faults to slip and trigger earthquakes.

Oklahoma’s regulatory response to oil and gas earthquakes has evolved, too. Initially, Oklahoma authorities reacted more slowly and passively than other states experiencing earthquakes linked to oil and gas activity, a 2013 investigation by StateImpact showed.

The Corporation Commission enacted new monitoring requirements that went into effect in September 2014. The agency then started scrutinizing permits and individual disposal wells in shaky areas. 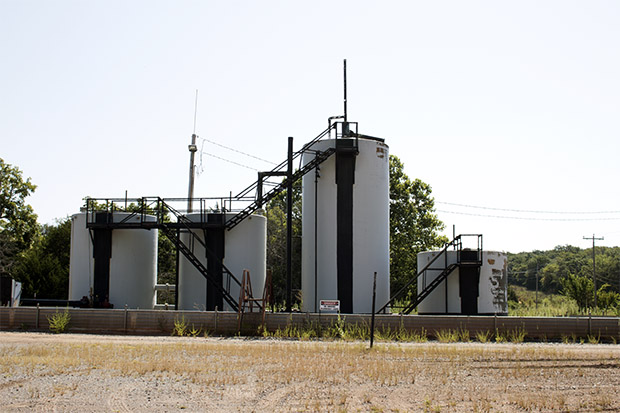 Oklahoma’s oil and gas regulator in March directed the operators of nearly 350 disposal wells to limit the pumping of fluid into crystalline basement rock, an underground rock formation known to trigger earthquakes. That action was broadened and tweaked in July and applied to hundreds of additional wells.

Some scientists have questioned Oklahoma’s focus on well depths and requirements that operators “plug-back” — fill in to make shallower — wells found to be injecting into basement rock.

“From a scientific standpoint, I think a number of us had doubts about whether that was going to be effective in and of itself,” says Bill Ellsworth, a geophysicist with the U.S. Geological Survey.

“I think that plugging back is going to be effective only in rare cases,” Zoback wrote in an email to StateImpact. Zoback communicates regularly with the state’s Coordinating Council on Seismic Activity — a Fallin-created committee “charged with organizing state resources and related activities related to Oklahoma’s recent increase in seismic activity.”

Ellsworth, Zoback and other scientists think the amount of drilling waste fluid — and the rate oil companies pump it underground — could be a bigger factor in triggering earthquakes. That analysis has been shared with Oklahoma officials and earthquake council members, Ellsworth says.

“There’s no secrets that are being held back,” he says. “They’ve got good lines of communication and they’re talking to the right people.”

There are signs Oklahoma oil and gas authorities are moving towards broader volume cuts.

After a widely felt 4.5-magnitude quake struck near the town of Crescent in late July, regulators responded quickly and directly: They asked the oil industry to shut down three disposal wells and told companies to slash fluid volumes at 23 wells. This is the first time the Oklahoma agency has issued volume cutbacks for groups of wells, says Corporation Commission spokesman Matt Skinner.

At the same time Oklahoma regulators were issuing plug-back directives, their counterparts in Kansas were ordering volume cuts in that state, which is also experiencing oil and gas earthquakes.

On March 19, the Kansas Corporation Commission, citing the need “to protect the public from immediate danger to health, safety, and welfare,” signed an order demanding operators reduce the volume, rate and pressure of waste fluid pumped into disposal wells, including about 70 such wells in two counties near the Oklahoma border.

“We’re still pretty early in this data-gathering process, but there’s no question that you see a reduction in activity,” he says.

Oklahoma and Kansas are both experiencing quake activity, but the two states aren’t an exact comparison. Oklahoma has a much bigger oil and gas industry — and a lot more earthquakes.

Low oil prices have been an economic drag in both states. But Buchanan says the slowdown presents an opportunity to do as much earthquake research as possible before oil prices climb and both drilling and fluid disposal boom again.

Preliminary data are encouraging, but Buchanan and other earthquake researchers say it’s unwise to focus on rapid solutions and treat oil and gas earthquakes as a short-term problem.

“If we don’t learn everything, we can learn we risk going through this all over again,” he says.