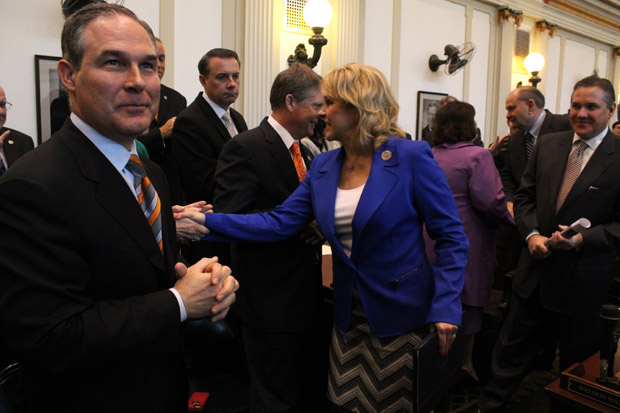 Though just finalized, the plan has been in the works for two years, and Oklahoma officials have opposed it every step of the way.

Oklahoma Attorney General Scott Pruitt has already filed two lawsuits against the EPA over the Clean Power Plan, in July calling it “an unlawful attempt to expand federal bureaucrats’ authority over states’ energy economies in order to shutter coal-fired power plants.” Both lawsuits were dismissed, but are being appealed now that the rule is final.

In April, Governor Mary Fallin issued an executive order pledging not to comply with the new rules. States are supposed to come up with their own plans to meet the carbon reduction goals, but the federal government will do it for states, like Oklahoma, that refuse.

as The Oklahoman’s Chris Casteel reports, it all adds up to a protracted legal fight:

A White House official said Sunday that the rule represents “the single biggest step any president has made to curb carbon pollution that is fueling climate change.”

The rule could be tied up in court for years and may ultimately be reviewed by the U.S. Supreme Court. [EPA Administrator Gina McCarthy] said Sunday it is a “legally very strong rule.”

If this all sounds familiar, that’s because it is. Whether the issue is the EPA’s Regional Haze Rule, the Mercury and Air Toxics Standards, or any of the environmental regulations pursued by the Obama Administration, Oklahoma can be counted on to fight against it all the way to the U.S. Supreme Court if necessary.

In the meantime, Oklahoma’s largest utility companies are already busy upgrading coal-fired power plants or converting them to natural gas to comply with previous EPA regulations.