Public and private workers in New Hampshire are among the most evenly compensated, finds a new report from the right-leaning Citizens Against Government Waste (CAGW). Still, the report shows, the New Hampshire’s public sector pays on average, $4.51 more, per hour, than the private sector. The report states that “State governments pay on average 6.2 percent more per hour in wages and benefits, including pension benefits, than the private sector for the 22 major occupational categories that exist in both sectors.” END_OF_DOCUMENT_TOKEN_TO_BE_REPLACED

New ‘Granite Fund’ To Put Local Capital In The Hands Of N.H. Startups 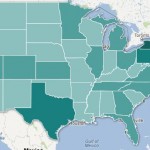 This map traces the last year of venture capital deals across the country. In New Hampshire, a collaborative venture fund -- managed by Borealis Ventures with money from the state -- will soon be moving local capital into the hands of local innovators. Continue reading → “Total municipal appropriations per person have leveled off considerably over the past three years compared with pre-recession trends.  At the same time, we see that two main sources of municipal revenue–state aid and property taxes–have been under strain, with per capita state aid to cities and towns down roughly 14 percent from 2007 to 2010.  Total property valuation per capita remains essentially flat over that same period, after several years of annual increases.” END_OF_DOCUMENT_TOKEN_TO_BE_REPLACED The Occupy movement has popularized the notion of "the 99 percent." An interactive map breaks that figure down further

If you move past the front-page headlines, work your way past the daily business news, and descend into the depths of the New York Times website, there’s a reasonable chance you’ll encounter a cool, interactive infographic.

And it just so happens that today, we’ve found what we believe to be one of the Times‘ niftiest offerings to date.  They’ve posted an interactive map that allows you to plug in your salary, and move your cursor over various states and counties to compare how your personal wealth (or lack thereof) stacks up.  As an example, here’s a screen shot of what we found when we entered in New Hampshire’s median salary of $61,042 (which is among the highest in the country).

END_OF_DOCUMENT_TOKEN_TO_BE_REPLACED How does NH's economic recovery look compared to the rest of the US?

A recent piece in the New York Times lays out what many Americans already believe:
For much of the country, economic recovery is a ways off.  Reporter Michael Cooper writes:

“Less than a tenth of the nation’s metropolitan areas have regained the jobs they lost in the economic downturn, according to a report…

Only 26 of the nation’s 363 metropolitan areas had recovered their lost jobs by the end of 2011, and only 26 more are projected to recover them by end of this year, according to the report, which was commissioned by the United States Conference of Mayors. It will take at least five years for the 80 hardest-hit areas to recover the jobs they lost, the report forecast.” END_OF_DOCUMENT_TOKEN_TO_BE_REPLACED Romney won the NH primary by a healthy margin. We break down the county vote by economic drivers

This year, NHPR’s GOP primary coverage took on a strong national flavor, broadcasting to listeners all over the country.  Among the network’s expanded audience were WNYC listeners in, well…NYC.  And in the spirit of inter-station cooperation, the good folks at WNYC and Patchwork Nation used AP polling data to put together a county-by-county map of election results.

What interested StateImpact about this map is that it also classified each county according to its main economic drivers.

Before we get rolling, though, just one brief note about the map.  To see statewide totals, move your cursor outside of New Hampshire.  To get more details on how WNYC/Patchwork Nation determined the main economic driver of a county, just click on the colored icon in the map key.  You’ll see a nifty pop-up including census data, poll numbers, and other info.

We’ve got a written break-down below the map. END_OF_DOCUMENT_TOKEN_TO_BE_REPLACED 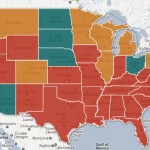 How much could a Eurozone recession hurt New Hampshire? We explain after the jump

Yesterday, Lowe’s announced it’s closing 20 under-performing stores across the country. Based on the company’s press release, we’ve generated this map of cities that will lose a Lowe’s.  The Northeast by far took the biggest hit.  The swath of country from New Jersey to Maine accounts for 45 percent of closures.  And among all the states, New Hampshire is losing the most stores.  Between closures in Claremont, Hooksett, and Manchester, 279 full- and part-time employees will lose their jobs.

You can check out the larger size of this map by clicking the link below.

View Where Lowe’s Closed in a larger map