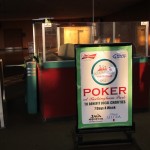 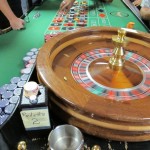 Locals wager over a roulette table. 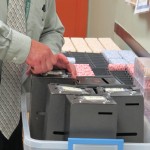 Money is transferred from gaming tables via a double-locked box. This is one of many security measures at Rockingham Park. 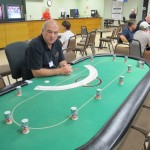 Mike, a poker dealer, awaits the next tournament. 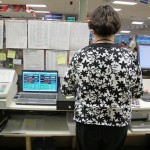 Behind the counter at Rockingham Park. 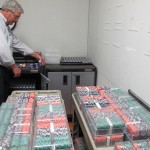 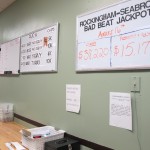 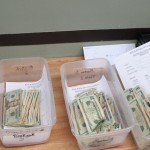 Money is collected and counted under security cameras. 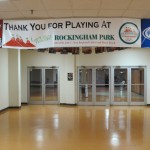 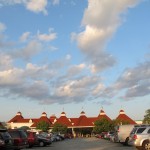 
Imagine a high school cafeteria with painted concrete walls and linoleum floors. Then switch out the lunch-tables for blackjack and poker tables — and you’ve got Rockingham Park, the race-track turned gaming room at the epicenter of New Hampshire’s debate over expanded gambling.

Just about every year for the last 15 years, the legislature has voted on whether or not to expand gambling in New Hampshire. Every single bill has failed. But as the race for governor has gotten under way this season, all four major candidates have come out in favor of expanded gambling. Why? It has a lot to do with Massachusetts’ decision to open three casinos across the Bay State.

After almost a decade of unsympathetic leadership from Governors John Lynch and Craig Benson, candidates Maggie Hassan, Ovide Lamontagne, Jackie Cilley and Kevin Smith all support expanded gambling in one way or another. Candidate Kevin Smith puts it this way:

The reality is with Massachusetts putting them in, you’re going to have a lot of New Hampshire residents that are going to be gambling down there, and that’s money that could be spent right there in the state that could be taken out of the state.

Maggie Hassan adds that the social costs of gambling will affect New Hampshire whether or not the we build a casino, so we might as well use gambling revenue to off-set them.

The four candidates agree the funds should be targeted toward education funding. Both republican candidates have vowed not to let gaming revenue grow government — instead, they would use it to offset taxes and transportation costs.

At Rockingham Park, president Ed Callahan peers out over his blackjack tables. He says it was bad enough when Connecticut and Rhode Island opened their casinos. With the new Massachusetts casinos even closer by, he risks losing out even more.

In the racing game, Rockingham Park handled about $200 million in 1991. In 1992, we handled $93 million. We lost more than 50 percent of our business, and two things happened in 1992. Foxwoods opened up, and Rhode Island opened up with slot machines in Lincoln downs.

As it stands now, Rockingham Park and other gaming rooms in New Hampshire are limited to low-stakes table gaming for local charities. Andrew DuBois and Dennis LaVesque are regulars at Rockingham Park. DuBois says he makes the two hour drive to Foxwoods all the time. If he could play the kind of high stakes card games he likes nearby, he would be there in an instant. “Driving all the way down to Foxwoods is a hell of a commute,” DuBois says. “That’s an extra couple dollars for a bet!” his buddy LaVeck pipes in.

If New Hampshire doesn’t keep up, the candidates worry revenue from frequent gamblers like DuBois and LaVeck will leave the state forever. But anti-gambling activist Jim Rubens says the candidates are probably not sincere. “Candidates for government are campaigning state-wide, and they are hearing this incredibly vociferous pocket of pro-casino craziness in Salem,” Rubens says. “All four candidates are in heavily contested primaries, and [they] don’t want to alienate this vocal pocket.”

Rubens is talking about voters like Salem resident Larry Belair, who is at Rockingham Park raising money for the Knights of Columbus. “I’ve always been a Democrat, tend to lean that way,” Belair says, “but I’m voting for the person who’s gonna put in the expanded gambling. Either party, makes no difference.”

Political analyst Dean Spiliotes doesn’t think the candidates are just posturing to court votes. After almost 20 years of persistent lobbying, debate, and legislative headbutting, opponents may simply be getting used to the idea of casinos in New Hampshire. But more than that, Spiliotes says, with higher taxes seemingly off the table, New Hampshire just needs the money. “It just seems like as the conversation has changed nationally and in other states, the conversation has changed here as well.” Spiliotes adds, “a lot of time economic conditions really drive that, because everybody’s looking for new sources of revenue.”

After 20 years of expanded gambling legislation going absolutely nowhere, Spiliotes thinks a casino bill could end up on the governor’s desk without a likely veto.