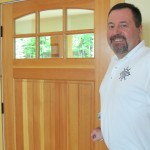 “I started building in the speculative market in 1987. My grandparents owned some property up here and decided that they wanted to sell it,” says home builder Joe Skiffington. “And I was doing renovations and construction in the Boston area. I came up to the lake and I said, you know, I wonder what selling vacation homes would be like? So I built a couple of them on spec. These were $79,900, so a far cry from what we’re doing today. But the process was fun.” 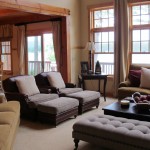 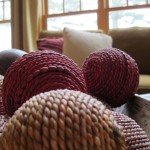 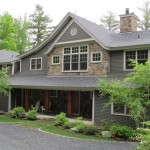 “A lot of people got into the business because they felt they just couldn’t lose,” Skiffington says. “When non-builders start building spec houses, it becomes a problem. There were too many realtors, too many builders, and then what happens is the bubble bursts and nobody makes money and everybody gets hurt. I’d like to see us maintain some sort of normalcy in a trend where price escalation is at a minimum.”

As part of our weekly “Getting By, Getting Ahead” series, StateImpact is traveling across New Hampshire, gathering personal stories from the people behind the economy.  In our sixth installment, we talk with a Lakes Region home builder.

Summer is boom time on the banks of Lake Winnipesaukee.  These are the months when the region’s tourist towns double or even triple in size as wealthy vacation home owners settle in for the season. But at the moment, one of these homes — a 7,000 square foot mini-mansion on Governor’s Island — remains empty.

Joe Skiffington’s company built this home back in 2008.  Skiffington, 48, is a big man with a dark goatee and an easy smile. He’s part of a small community of Lakes Region developers who build high-end vacation houses — places with 22-foot high vaulted ceilings, exposed pine beams, basement saunas and amazing guest bedrooms.  Upstairs, Skiffington shows off one of these guest rooms.

“It has great lakefront views, 17 by 17 is the size of the bedroom, two walk-in closets,” Skiffington announces.  The place easily fits a king size bed, two over-sized nightstands and a TV, with enough room to spare to fit a giant guest bathroom.

It feel less a lake house than a lake palace.

Skiffington is hoping to sell this house for $2.7 million. But through 70 showings over the past four years, it has remained vacant.  Some customers have ordered new homes from Skiffington based on walking through this house, but no one has snapped up the house itself.  Skiffington built the house “on spec.”  That means he bought the land and built the home under the assumption that he could quickly unload it.  It’s a high-risk venture, but when the economy is booming as was in the middle of the last decade, it’s a high-profit venture as well.

But by 2009, things started to sour.  Wealthy executives from Massachusetts, Connecticut and New York started getting skittish about buying expensive vacation homes. Skiffington had to lay off a couple workers as things slowed down.

But he is in better shape than some of his competitors.  He has only one spec house he’s trying to unload.  It’s one of nearly 100 high-end homes with “For Sale” signs dotting the lake shore. Last year, the market only saw about 20 sales of homes in this price category.  At that rate, it will take at least four years to clear out the bulk of this inventory.

To stay afloat, Skiffington has mostly switched gears to general contracting.  Rather than anticipate the home someone might want in a speculative market, he is simply taking orders to build or renovate high-end houses.  General contracting is far less risky than building on spec, but it’s also far less profitable. Builders only profit on the labor itself.  And the lackluster market has even pushed down those profits.

“You don’t like going from a profit margin that you’re comfortable with to a profit margin that’s much less,” Skiffington says.  “But I think we’re making it through.  We’ve had to be more competitive on our general contracting prices, by far.  The profit percentage is cut in half of what it would normally be.”

Although there were only a handful of developers involved even at the height of the market, they played an important role in the Lakes Region economy.  It’s not unusual for one-third or even half of the homes in a town to be seasonal.  The bulk of jobs here are in the service industry, catering to tourists and the very wealthy.

“That’s all they do after we sell them a house, is spend,” Skiffington says. “I’ve been told by different customers that they’ll spend anywhere from $50,000 to $200,000 per year to maintain the house, real estate taxes, then use of local services,”

That’s another thing that becomes clear talking to Skiffington.  He really knows his customers.  He understands why the market has slowed, and that he needs to adapt for the time being.  “If a typical client had a $50 million portfolio in 2007, and in 2008 it was $25 million, he lost half his net worth?!” Skiffington says. “That person is not going to be inclined to go out and buy a second home, even though he’s still technically wealthy with that net worth.”

And while there is still a glut in the market for high-end vacation homes in the region, Skiffington says there’s nowhere else he would rather be building — or selling — homes.