A manufacturing trade group estimates there are 600,000 factory jobs available in the US right now.  Many of them are in skilled work, like machining.  And most of these jobs are held by Baby Boomers, who are edging closer to retirement.  But many of their Gen Y descendents–who were raised on tales of mass layoffs and jobs moving overseas–aren’t betting on the new rise of American manufacturing.  Slowly, though, some of these young workers are reconsidering factories. StateImpact recently visited the machine shop at Nashua Community College,where we spoke with some younger students about why they’re putting their faith in advanced manufacturing. 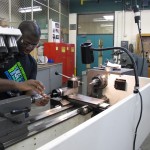 Thirty-year old Edwin Otchere came to NCC from Lowell, Massachusetts. He started out as a home health aide. “I never imagined myself being in the manufacturing field,” Otchere says. “But I realized I had interest in doing stuff with my hands, and I had that kind of satisfaction from it. I was checking Craigslist one time, and I realized there were a lot of open jobs with the manufacturing field. So I decided, why not look around to see what’s in store for me?” 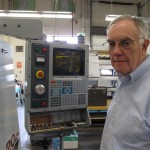 Mark Dodge coordinates NCC’s Machine Tool program. He says most of his students are non-traditional, meaning they’re not fresh out of high school. “A lot of what is pitched in the high school is not related to the blue collar world,” Dodge says. “A lot of high school counselors do not understand or appreciate what is involved in what we do here. So therefore, what they see as a success is, somebody going to a four-year institution, versus someone going to a two-year school, coming out, and having a viable trade that they can do. It’s a big barrier, to be frank with you.” 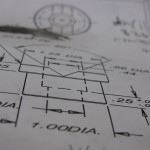 Between reading prints, programming computers, and manually shaping parts, machining is an incredibly skilled trade. And that shows in the pay scale. Dodge says, “Our grads can expect between $14 and $15 an hour, to start. A good machinist could go to $30 or $35 an hour. Typically, there’s overtime, five to 10 hours a week, so even at $15 an hour, that’s a pretty substantial paycheck for a beginning blue collar job. For an experienced machinist, $80,000 to $100,000 is not out of the question for a year’s pay.” 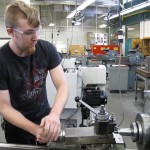 At 21-years old, Ben Dubray of Nashua is unusually young for an NCC machining student. “My original motive was simply that I’m a gearhead,” Dubray says. “I like working on cars, but you can’t make much in automotive these days, because too much competition. But my grandfather’s a machinist, and his friends are machinists, and a few of them own their own shops. And I remember them talking about the fact that there’s no new machinists. So that kind of gave me the hint to look into this. Because if nobody’s going into it, there’s going to be jobs, won’t there?” 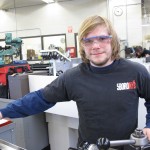 Matthew Bachelder is another 21-year old Nashua resident. He came to NCC after two years working as a restaurant dishwasher. “So that was motivation enough to say, time to get better experience,” he says. “I’ve got a friend who’s also in the field, and just the way he’d talk about it, it sounded like a lot of fun, and it was better than what I was doing before, so I figured it would be good to try to get into an actual trade. It’s only my first year here, and I’ve already had like three opportunities to go get a job somewhere else in the machining field. So it’s pretty easy, you know. Especially in Nashua. There’s a lot of places you can go look around. You can make bearings or gears or anything, you know, it all just depends. Anything that’s made out of metal there’s a requirement for. And a lot of things are made out of metal.” 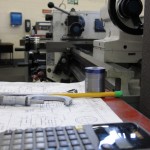 In addition to teaching, Program Coordinator Mark Dodge has been a machinist for about 30 years. He says the field has changed dramatically. “A lot of people don’t realize what it is we do, or even the conditions that we do it in. In the old days, you’d have the greasy floors, the dark, poorly lit machine tools, and people cranking cranks and pulling levers and so forth. And it’s not like that at all. But for the younger generation, Mom and Dad don’t know that. And it’s also seen, frankly, as a way, if someone’s not doing well academically, ‘Well, we’ll send them down to the machine shop, because really, that’s all they can do.'” 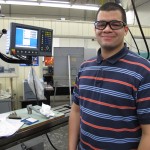 At 27-years old, Orlando Morales of Nashua had already spent 10 years working at a supermarket before taking up machining. One of the things that made him consider the trade was a taking a tour of a rice company. “They showed us the combine machines, and when the parts broke in the combine machines, they would send it to the machinist. And I witnessed first-hand how the machinist cut up some metal and made a new part for the machine and got it back up and running in no time. And that was really amazing.” 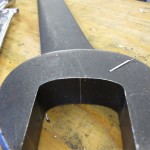 NCC runs one of the largest Associate of Science degree programs for Advanced Machine Tool Tech in New England. But it’s still one of the smaller departments at NCC. Program Coordinator Mark Dodge says that while enrollment’s generally around 40 or 45 students, last fall, freshman enrollment spiked to 60 students. 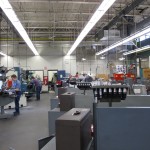 As NCC’s Machine Tool program sees higher enrollment numbers, Dodge says, “Manufacturing in this country has not disappeared. I would not characterize it as fading away, dying. It has certainly changed, and it has become, still, a valuable part of what we do in the country. And it is a strategic part, not just in the military sense, but in the medical profession. We have the ability to respond quickly, for example, with heart stents, bone screws, artificial hips, knees, and things like that–all came out of a machine shop. It’s something we can’t afford to lose. It’s in everyone’s interest in the country that we have a strong manufacturing base.”