Fishermen share a caught catfish at Pier 60 on the Delaware waterfront, near Tasker Street, in South Philadelphia, on May 12, 2018. For most of the 20th century, there wasn’t enough dissolved oxygen levels in the river to support fish.

Fishermen share a caught catfish at Pier 60 on the Delaware waterfront, near Tasker Street, in South Philadelphia, on May 12, 2018. For most of the 20th century, there wasn’t enough dissolved oxygen levels in the river to support fish.

When former regional EPA manager Richard Pepino was studying biology in college in the 1960s, he remembers one of his professors sending his class onto the river to measure the oxygen levels.

“We were getting no readings,” he said. “And so they said, ‘Somebody’s got to tell the professor the machine is broken.’ The machine wasn’t broken. There was no oxygen. How can you support an ecosystem where the amount of oxygen was too low to measure?”

The answer was: You couldn’t. The dead zone on the river ran from Philadelphia to about 25 miles down river in Marcus Hook, Pennsylvania. That made it impossible for migratory fish like shad to breed. They would die on their journey upstream before they could lay their eggs in the upper Delaware.

Once plentiful caviar and sturgeon also disappeared. Combined with losses of shad and other fisheries, that spelled the death of a regional industry once worth hundreds of millions of dollars.

But even for people who didn’t fish, Pepino said for decades, the river just wasn’t a place people wanted to be.

“You look out on the river today, it looks appealing. It did not look appealing in those days.”

The backbone of the nation’s current water quality regulations dates back to the early 1970s with the passage of laws like the Safe Drinking Water Act and the Clean Water Act, which is 50 years old as of Oct. 18. In today’s deregulatory climate, it’s helpful to take a look at what those regulations did and what challenges lie ahead for the Delaware Watershed.

The Clean Water Act worked to clean up major waterways from industrial pollutants and sewage in the ‘70s and ‘80s. Sewage treatment plants posed one of the greatest challenges to the health of the Delaware River at the time.

It was a massive building project. But it didn’t happen overnight. The cartoon below shows how many new steps were added to sewage treatment as a result of the Clean Water Act.

Back before the 1970’s, treatment was pretty simple. Gravity separated the raw sewage. Solids or sludge settled to the bottom of a big tank while scum, which includes grease, rose to the top and got skimmed off.

At that time, the scum and the sludge, the most concentrated solid waste, went into nearby lagoons or was dumped out in the ocean. But the remaining liquid ended up in the Delaware River, untreated. The bacteria in the waste gobbled up all the river’s dissolved oxygen, leaving little for the fish to breathe. 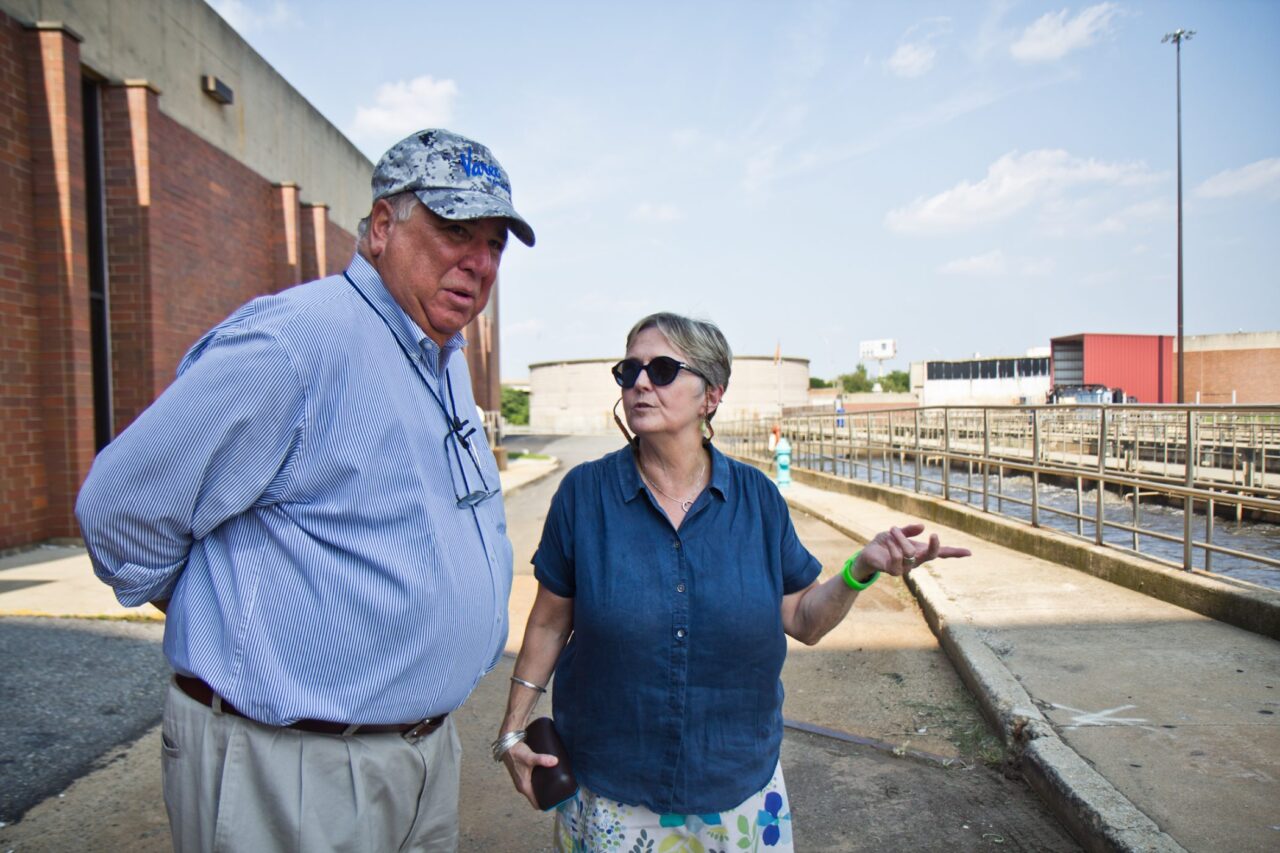 Retired water department manager Bob Serpente (L) speaks to current Water Commissioner Debra McCarty (R) at the southwest treatment plant near the airport. Serpente ran the plant when it was getting upgraded after the passage of the Clean Water Act.

To get the fish to return, the Clean Water Act ushered in an age of biological science to treat wastewater — using microbes and oxygen to eliminate the bacteria in a controlled setting.

Once the microbes eat the pollutants, any remaining solids settle out and are removed. Instead of going into lagoons, the solids are turned into fertilizer, or used to generate methane, which is used as a power source. After this stage, the remaining liquid waste looks like clear water.

Add in some chlorine, and the sewage water that typically goes into the Delaware River today is a lot cleaner than the Clean Water Act requires.

What is dissolved oxygen and why do we care?

Oxygen makes up about 20 percent of the air we breathe each day. Fish and aquatic life need oxygen as well, which is dissolved in water. The amount of oxygen each species needs varies. Coldwater fish such as trout and salmon need a lot, ideally about 6.5 milligrams per liter.

Carp are hardy, and although they prefer more, they could live with about 2 mg/l. Microbes, or bacteria, can live on less than that, and if it’s all gone, those microbes switch to consuming nitrate.

Prior to the Clean Water Act of 1972, parts of the Delaware River below Trenton were considered “dead zones.” There were no fish because discharges of organic materials from slaughterhouses and untreated sewage caused the oxygen levels to drop. Microbes and bacteria thrived on the organic material and as a result, consumed all the oxygen, leaving none for the fish.

One of the primary ways to measure the health of a waterway is to measure its dissolved oxygen. Researchers from the Delaware River Basin Commission have done that for decades and their data show that oxygen levels began to increase after cities like Philadelphia began treating its wastewater, getting rid of the organic material at the treatment plant using microbes and oxygen in a controlled environment.

Fishermen report seeing an increase in the number of fish caught in the 1980s. 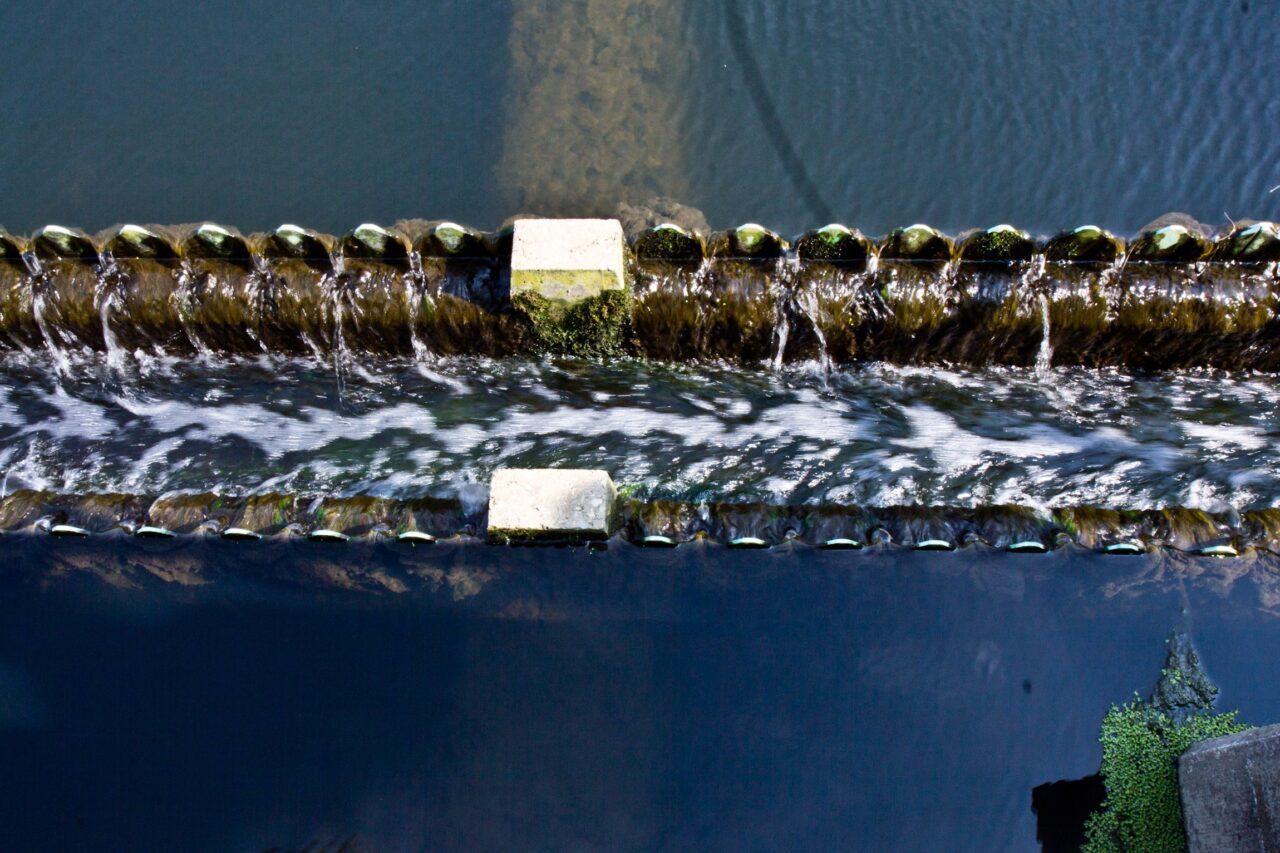 Today, the water that flows into the river after treatment at Philadelphia’s wastewater treatment plants exceeds quality standards under the Clean Water Act.

Dissolved oxygen is naturally higher in wintertime because cooler water can hold more oxygen than warmer water. Aeration, both natural from wind and waterfalls, and man-made from dams, helps increase the dissolved oxygen in a river.

Climate change presents a number of issues. Increased temperatures mean longer summers, and rivers that are expected to stay warmer. Rising sea levels mean the salt line could move further upstream in the Delaware River. And scientists have already seen an impact on wind speed, which is decreasing.

Danielle Kreeger is an ecologist and senior scientist with the Partnership for the Delaware Estuary. Kreeger says these are all cause for concern.

“Despite improvements because of the Clean Water Act to treat sewage and wastewater, we still are not done,” said Kreeger. “And these animals, which we’ve seen come back, like Shad, they’re still vulnerable to losses of oxygen in the future if we let our guard down.”

To learn about the invisible threats that still face the Delaware and its watershed, read Part 3 of Reviving the River.

Catalina Jaramillo and Dana Bate contributed to this report.

This story originally published as part of a January 2019 series on how the Clean Water Act cleaned up the Delaware River. Written and produced by Susan Phillips and Dana Bate, it won a regional Edward R. Murrow Award for Best Series in 2020. The reporting was supported by the William Penn Foundation.