Officials from the Department of Health discuss fracking and public health at a community meeting at Canon-McMillan High School in 2019. Photo: Reid R. Frazier 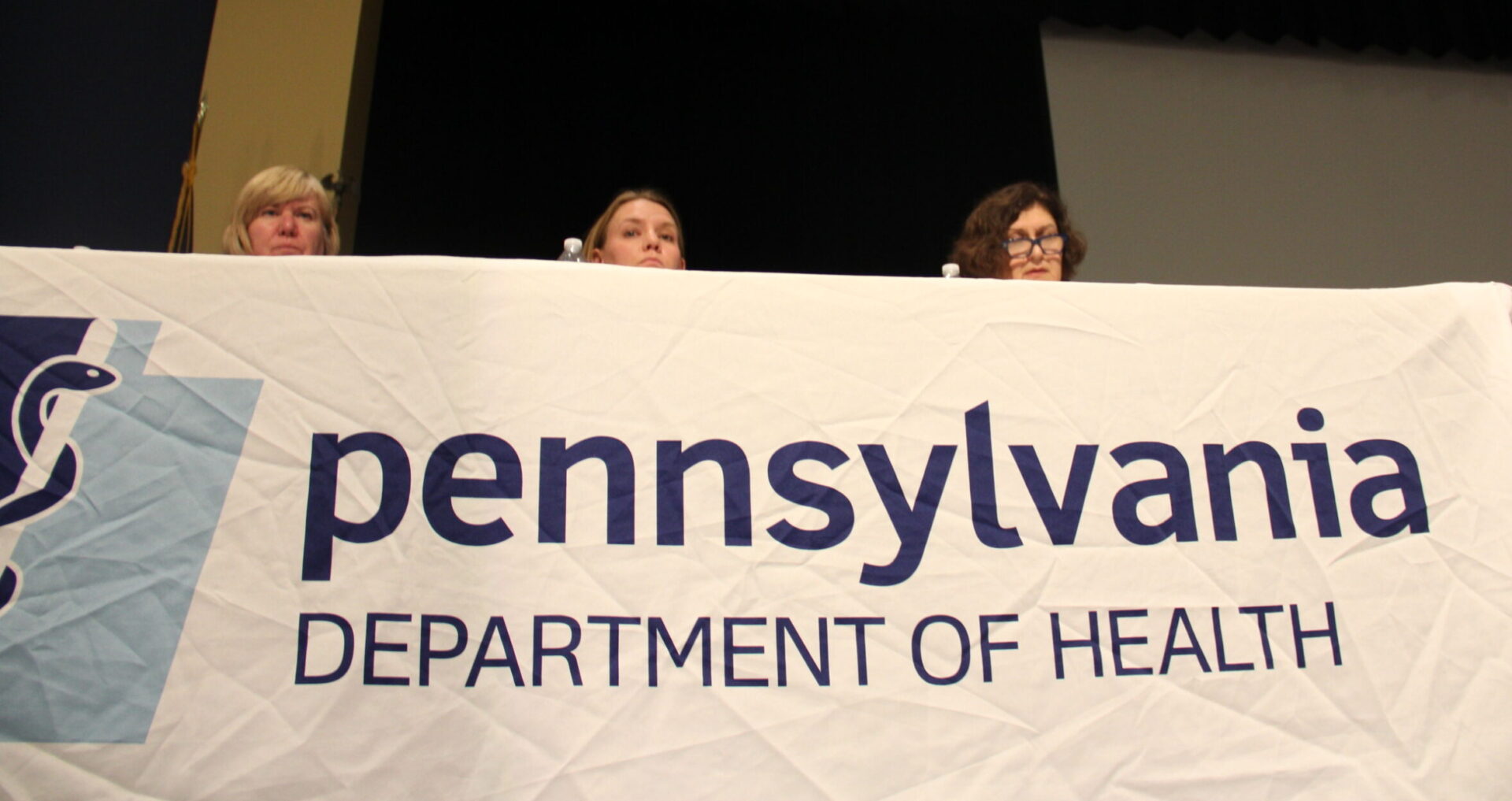 Officials from the Department of Health discuss fracking and public health at a community meeting at Canon-McMillan High School in 2019. Photo: Reid R. Frazier

The University of Pittsburgh and the state Department of Health are no longer participating in a public forum next week to discuss a series of state-funded studies about fracking and public health.

The forum will still take place on Wednesday, Oct. 5 in Canonsburg.

The Center for Coalfield Justice, one of the environmental groups involved in the forum, said in a statement this week that Pitt and the department of health had pulled out of the public event.

Both the university and the department of health were slated to take part in the event, “to explain the study process to the public and take questions from community members,” according to the center.

In a statement, Maureen Lichtveld, Dean of the University of Pittsburgh School of Public Health and Professor of Environmental and Occupational Health, said that the studies are still “ongoing” and that “no data are available to share publicly.” Licthveld said the school was “willing to answer questions from the community as the studies progress. When we are prepared to release the results of these studies, we will do so publicly in a timely manner.”

Pitt has set up a web site with more information on the studies’ methodologies.

Barry Ciccocioppo, a spokesperson for the department of health, said the agency pulled out of the event only after Pitt did.

“(A)fter Pitt withdrew its participation in the meeting it became clear that the department would be unable to provide anything more than background information and an overview of what led to contracting for these two studies,” Ciccocioppo said, in an email. “We will be providing that information to the organizers before the meeting.”

Ciccocioppo said the department will try to answer questions and solicit feedback through an online questionnaire it has set up. The survey will be open for two weeks after the Oct. 5 meeting.

The decision by the agency and the university to pull out of the event left its organizers frustrated.

“Parents deserve to hear from these institutions,” said Heaven Sensky, organizing director at the Center for Coalfield Justice, in a written statement. “Participating in this public forum was the bare minimum these agencies and research institutions could do to provide information to grieving parents and concerned community members. But now, they won’t even do that.”

Sensky and three other community members have resigned from the studies’ external advisory board, over what they say are Pitt’s and the agency’s “resistance to accountability and transparency to community members.”

“It is reasonable for community residents and pediatricians like me to be concerned that fracking may be to blame for the spike in rare childhood cancers and other health impacts in Southwestern Pennsylvania,” said Ned Ketyer, one of the former advisory board members, and president of Physicians for Social Responsibility Pennsylvania. “Community members are demanding answers. Unfortunately, the decision by the PA DOH and University of Pittsburgh to withdraw their commitment and not attend the public meeting on October 5 effectively silences those important voices and keeps the community in the dark.”

The forum will include perspectives from the former external review board members.

The studies in question are examining the relationship between fracking and diseases like cancer, asthma, and poor birth outcomes. The state funded the studies after pressure from families of patients of a rare cancer in Washington County.

Dozens of children and young adults have been diagnosed with Ewing sarcoma and other forms of cancer in a four-county area outside Pittsburgh, where energy companies have drilled more than 4,000 wells since 2008, according to state records. The cases were first reported by the Pittsburgh Post-Gazette.

Several of the cases included teenagers who died of Ewing sarcoma, who had all attended one school, Canon-McMillan High School in North Strabane Township, Washington County.

Ewing sarcoma has no known environmental cause. But the families nevertheless suspect that drilling and hydraulic fracturing, the method that energy companies use to extract natural gas from shale rock, played a role.

The health department says on its website hat oil and gas “infrastructure may present potential exposure hazards to residents living nearby as well as to oil and gas workers.”

The studies are expected to be completed by the end of the year, according to the Department of Health.