In Pa., climate change can increase flooding risk in places that rarely worried about it. This community is seeking solutions | StateImpact Pennsylvania Skip Navigation 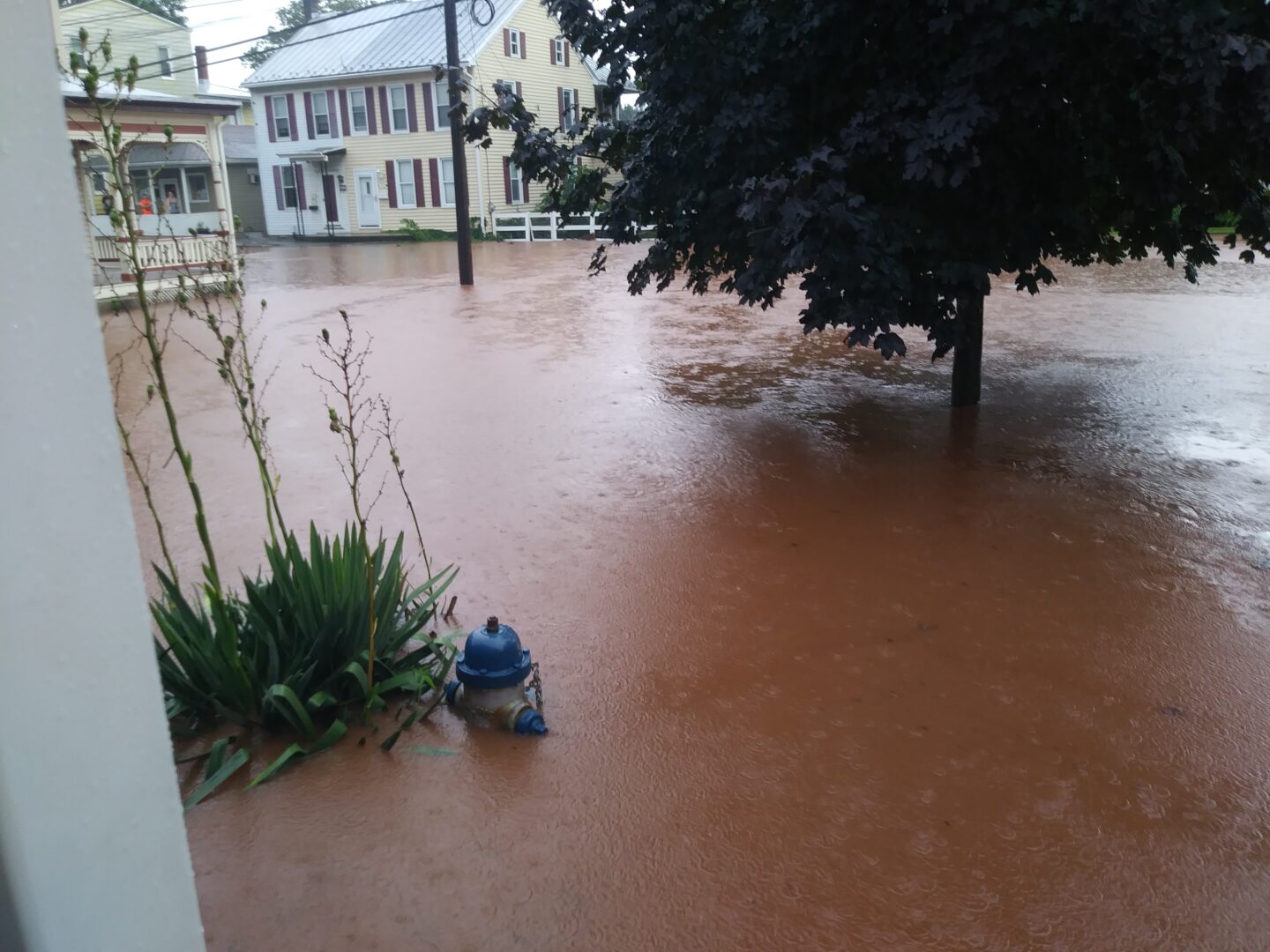 Samantha Sharp was home alone at her house in Middletown when floodwaters broke through windows and started filling her basement.

It was 2011, and Tropical Storm Lee was sweeping through Pennsylvania.

When Sharp’s mother Deb Sharp got home after work that day, she remembers walking through water up to her knees to reach her home.

The basement had been a hang-out space, with a pool table and kitchenette. It also housed the home’s breaker box, furnace, hot water heater, and served as storage for holiday decorations and family mementos. 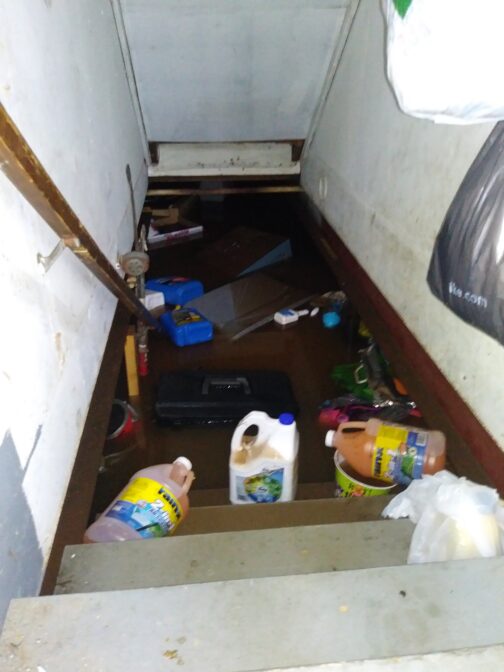 All of that had to be thrown out or replaced.

Because Tropical Storm Lee was declared a disaster by then-president Barack Obama, the Sharps got a little help to replace their furnace. But they didn’t have flood insurance. Their home sits away from the Susquehanna River and Swatara Creek, outside the historic floodplain.

Climate change is expected to make Pennsylvania warmer and wetter, with rain falling in more intense bursts. Because of that, floodwaters are now showing up outside those flood zones designated by the federal government. It will be up to communities to figure out how to respond.

After 2011, the Sharps moved the breaker box upstairs, installed sump pumps, and cleaned up the basement.

“I really didn’t think it was going to happen again. I thought it was just a freak thing,” Deb Sharp said. “I don’t think that anymore.” 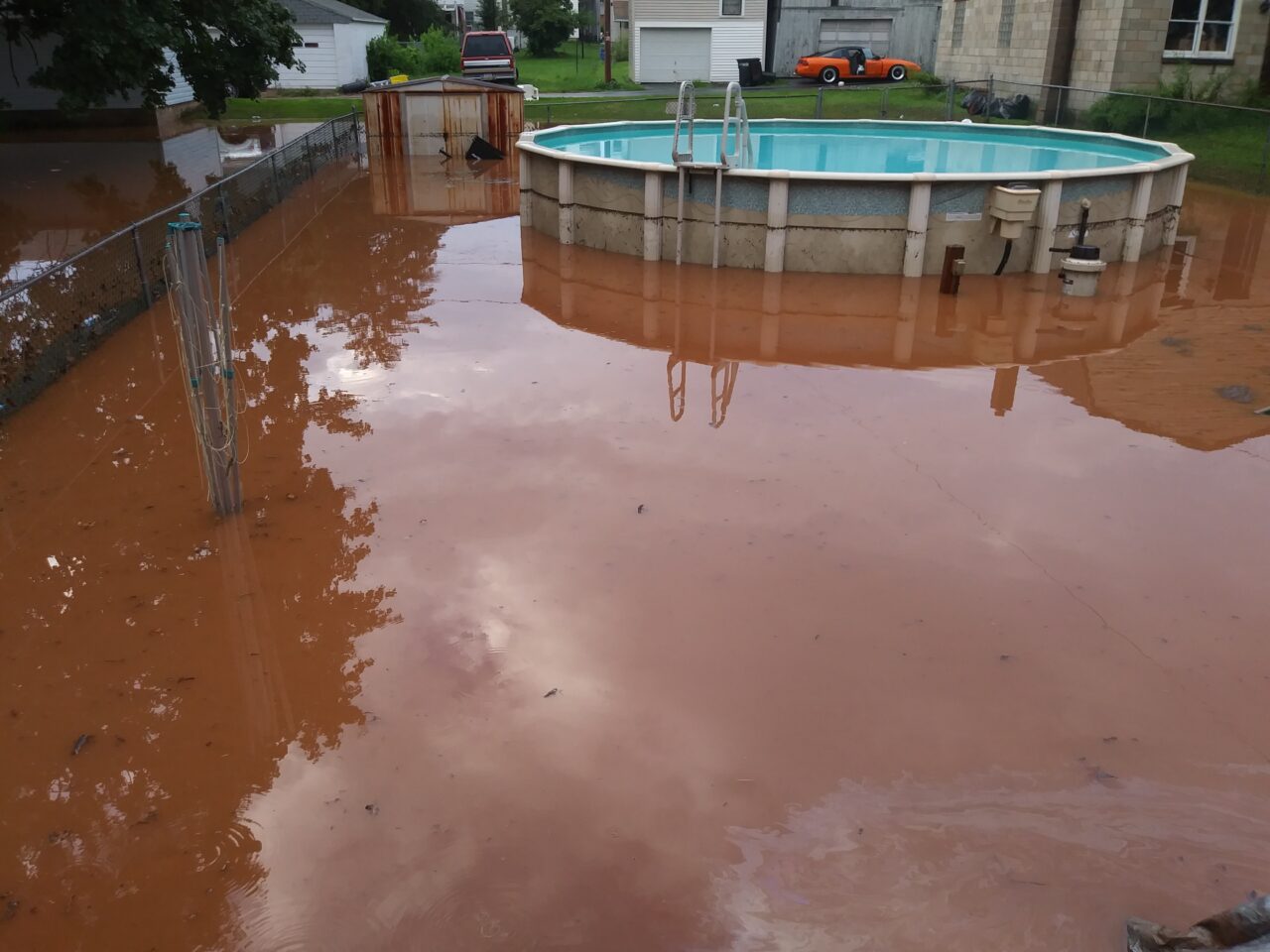 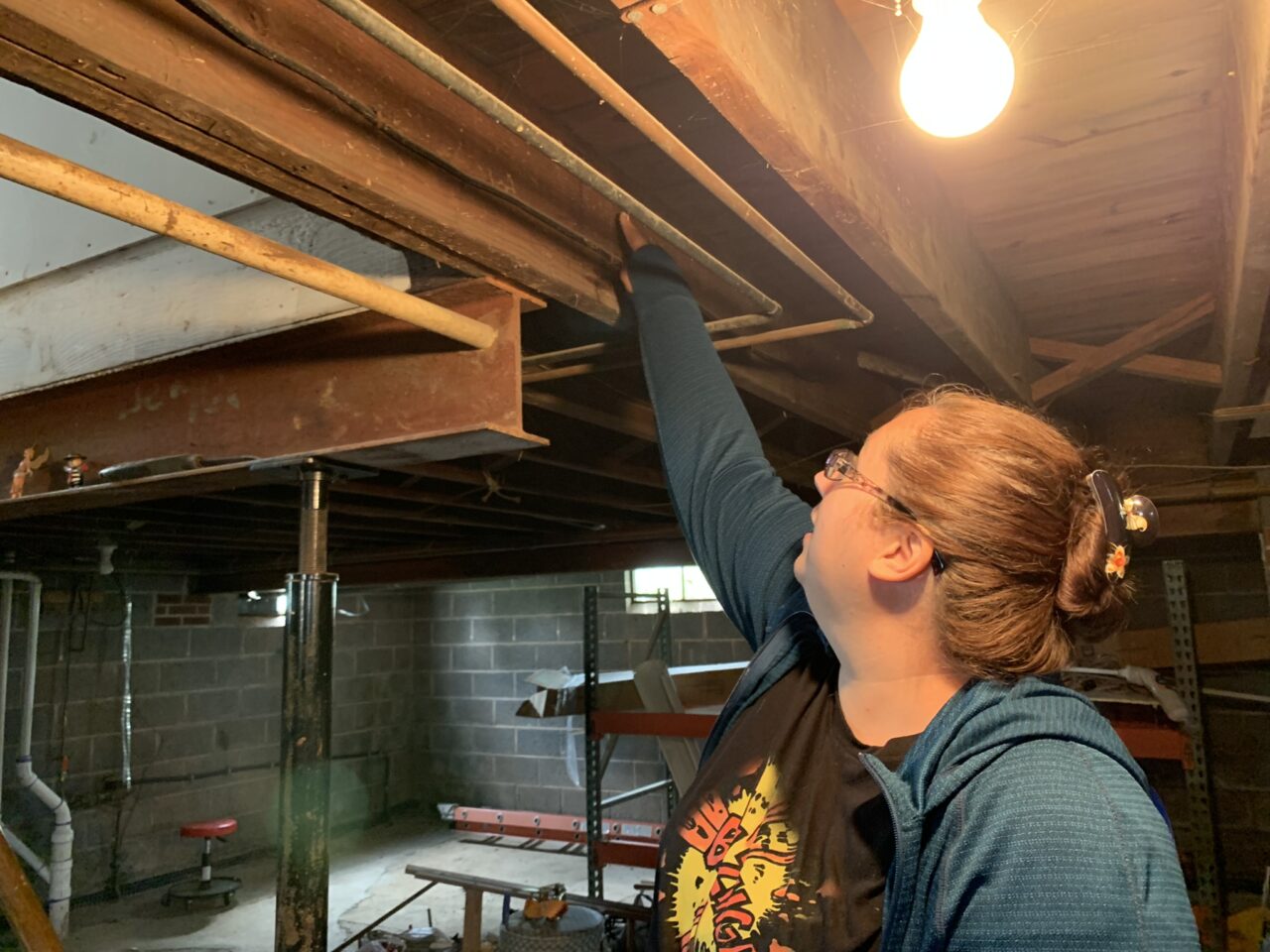 Samantha Sharp points debris left by floodwater on the beams of her basement ceiling on Aug. 10, 2022. (Courtesy of Samantha Sharp)

In 2017, another storm dropped more than 4 inches of rain on Middletown in about an hour. Water seeped in from the basement walls and floor, then gushed back through the family’s sump pumps when the borough’s storm sewers got overwhelmed. The Sharps’ basement filled up like a bathtub.

“And I thought, that’s it. We’re going to lose everything, you know?” Deb Sharp said.

In a video Samantha took at the time, brown water covers the front yard. The street looks like a river.

The 2017 storm wasn’t named and the damage it caused didn’t warrant a disaster declaration. But it left its mark.

Water lines are still visible on the stairs to the basement, mere inches from the home’s first floor.

Samantha remembers carrying her then 3-year-old son, crying and shaking, through the water to a relative’s house. The whole family gets on edge now whenever it rains. 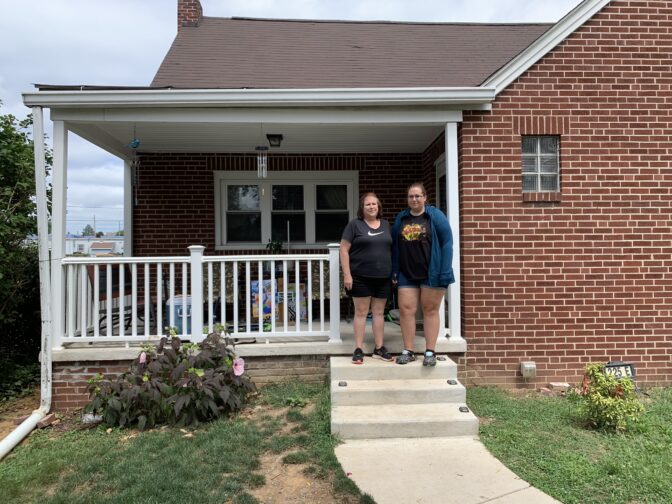 Deb and Samantha Sharp stand outside their home in Middletown on Aug. 10, 2022.

Deb Sharp didn’t even think about flooding when she and her husband bought the cottage-style house in 1996.

But now she’s not sure she can stay and keep living through floods. She said she can’t afford to move, and isn’t even sure someone else would buy it after the recent flooding.

The intense storms that cause flash floods are likely to become more common in Pennsylvania with climate change, and they’re happening outside historical floodplains. 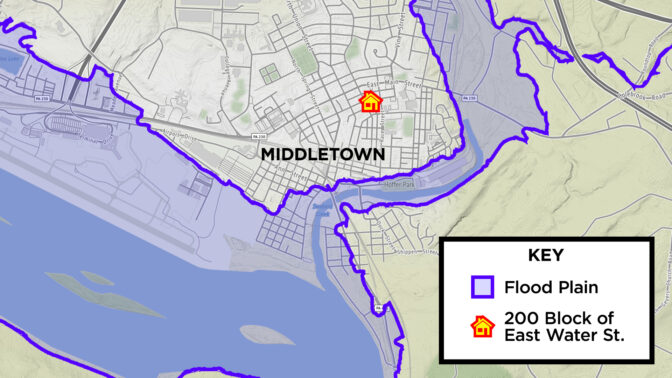 Old infrastructure can make the problem worse — and in some cases, it’s hiding even more issues.

Researchers at Penn State Harrisburg are trying to figure out all the factors driving this.

After the 2017 flood, the borough asked Shirley Clark, a professor of environmental engineering at Penn State Harrisburg, to help pinpoint the problems. 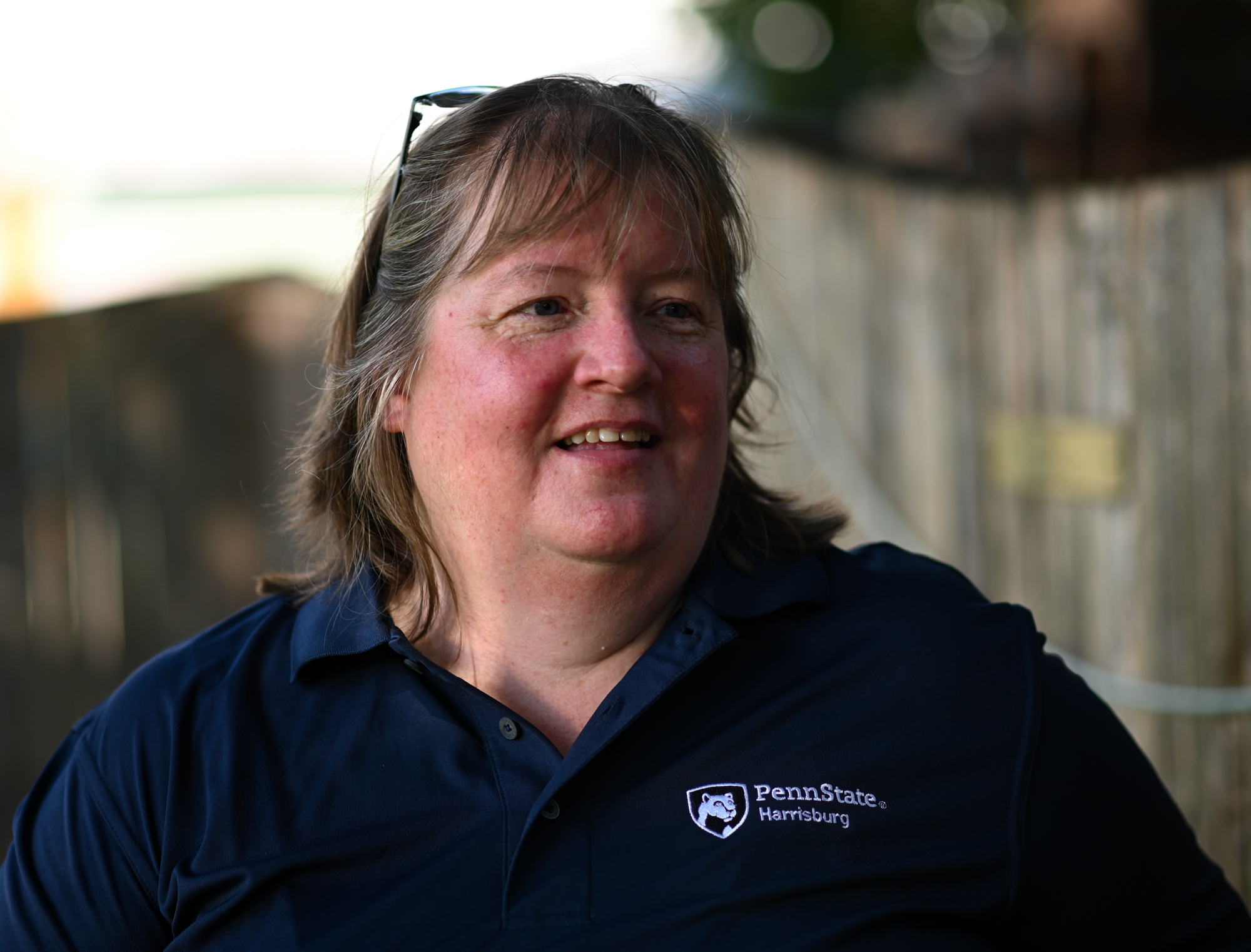 Shirley Clark, a professor of environmental engineering at Penn State Harrisburg, discusses the testing she is doing in Middletown on Friday, July 22, 2022. (Jeremy Long – WITF) 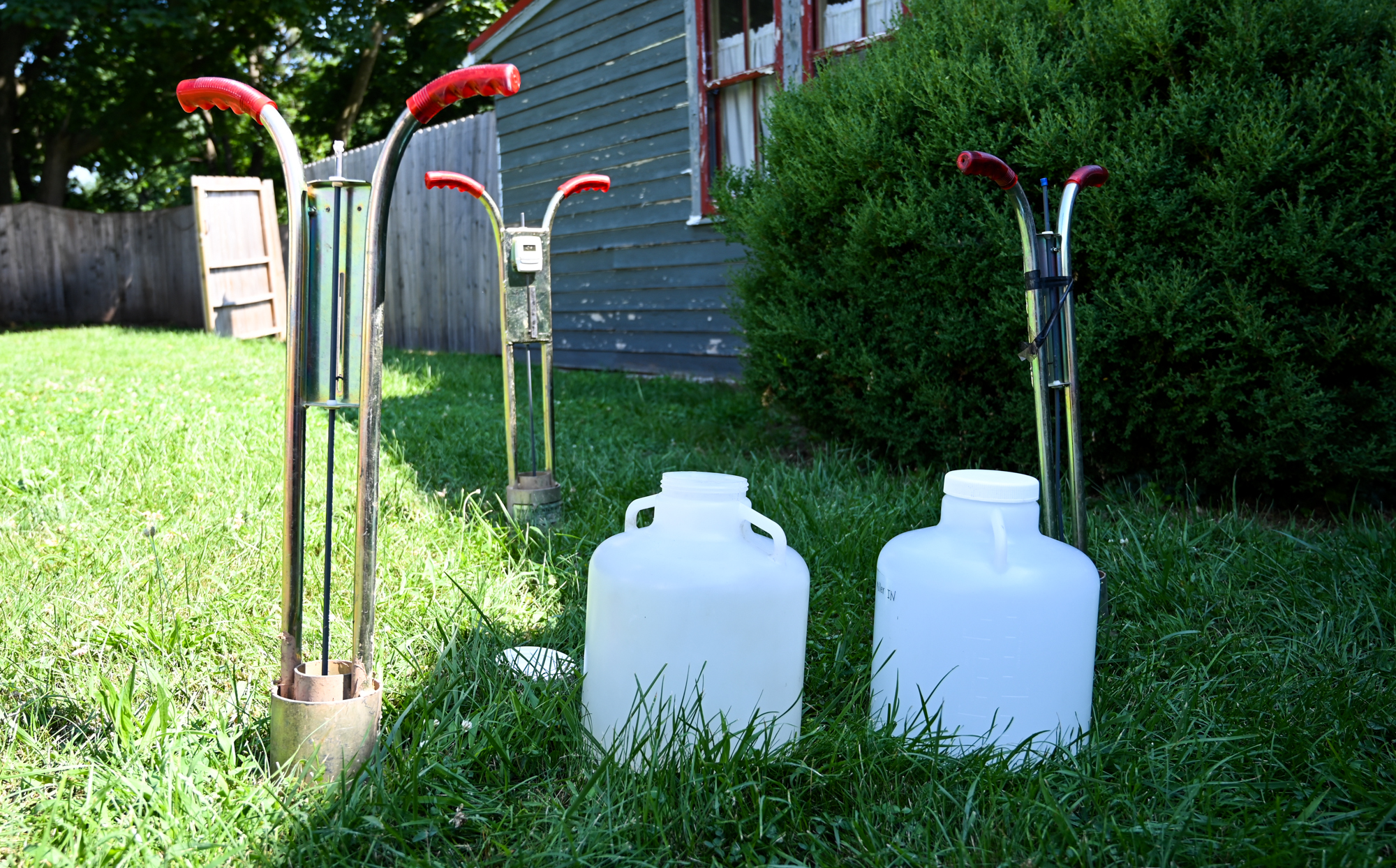 Infiltrometers are being used to test how fast water infiltrates the ground in Middletown on Friday, July 22, 2022. (Jeremy Long – WITF)

She started with records at the Pennsylvania State Museum, where she discovered a forgotten, buried stream that was shunted into stormwater sewer pipes and paved over between the 1930s and 1950s. It doesn’t appear on modern maps.

Clark thinks the stream probably runs near the Sharps’ house.

That stream is Bloody Run, likely named for the slaughterhouses that used to sit alongside it. 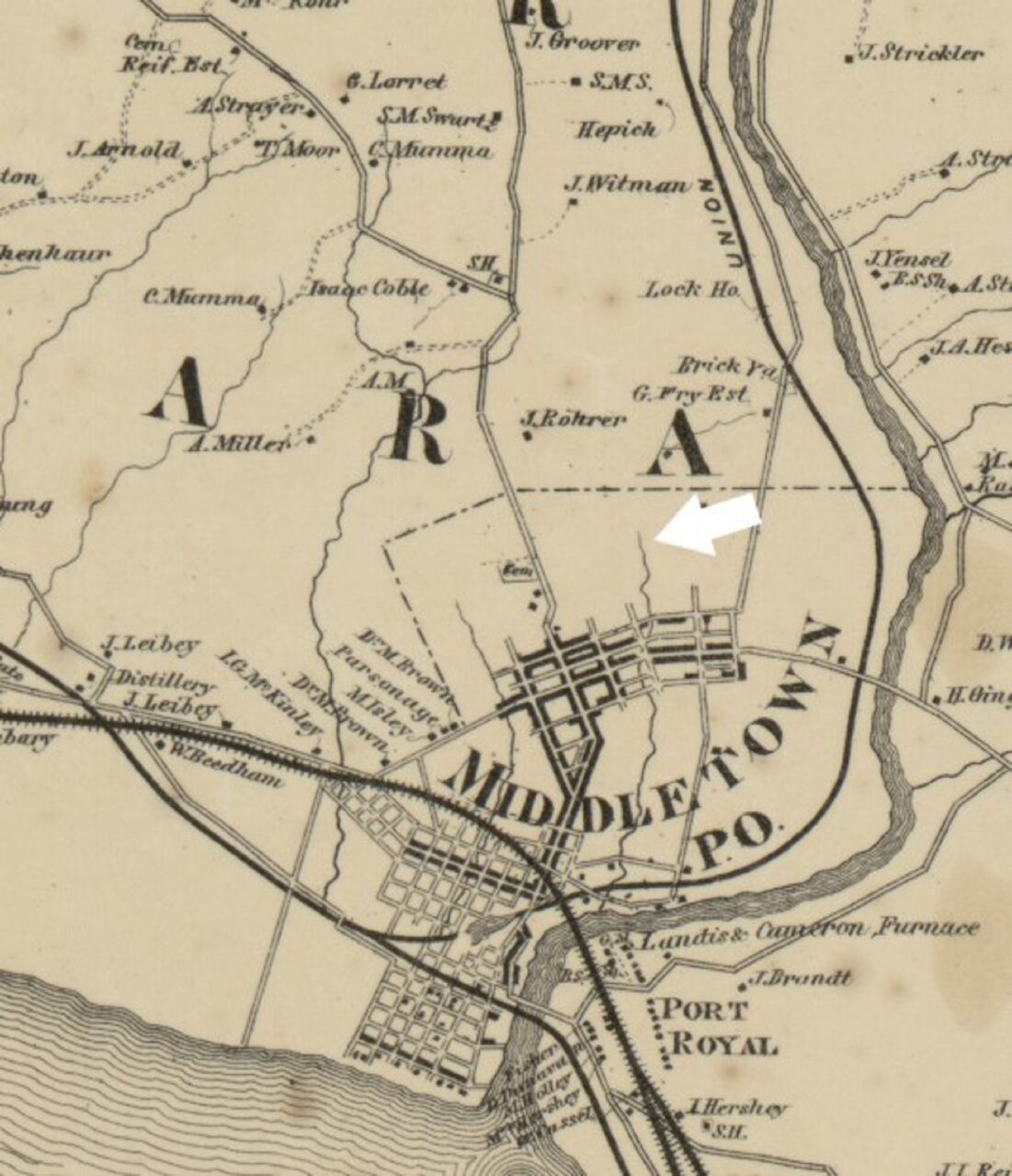 Courtesy of the Library of Congress

The arrow on this 1862 map of Middletown points to Bloody Run.

Many cities have similar buried streams, including Harrisburg, Lancaster, Philadelphia, New York, and Boston. Somewhere in their histories, planners decided the streams were a nuisance or thought they should be replaced with buildable land.

Clark and her students are now trying to figure out the relationship between forgotten streams, rainfall rates, soil moisture, and flooding.

“And it’s an area that we just don’t have enough information on overall, except that we know it’s a problem in areas known as environmental justice areas,” she said. 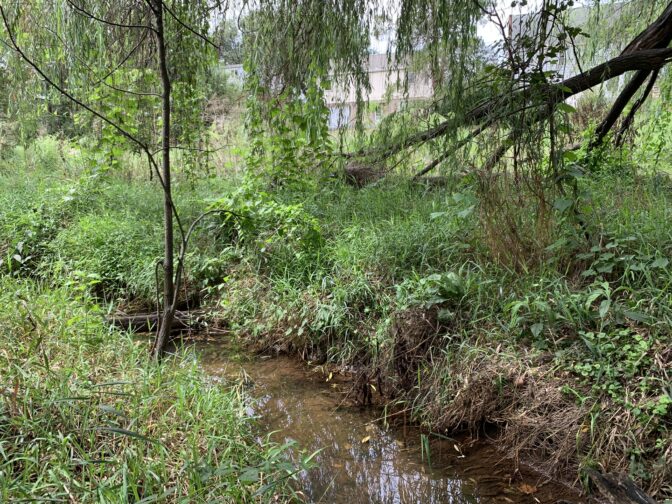 But the thing about water — the more you try to squeeze it, the faster it runs out of your hand.

Clark’s work in Middletown is funded by the Pennsylvania Sea Grant Program. Her team will gather and examine data such as soil compaction and water infiltration rates in different areas around the borough. But a second phase of the project will focus on information like the stress repeated flooding causes for people who live in Middletown. 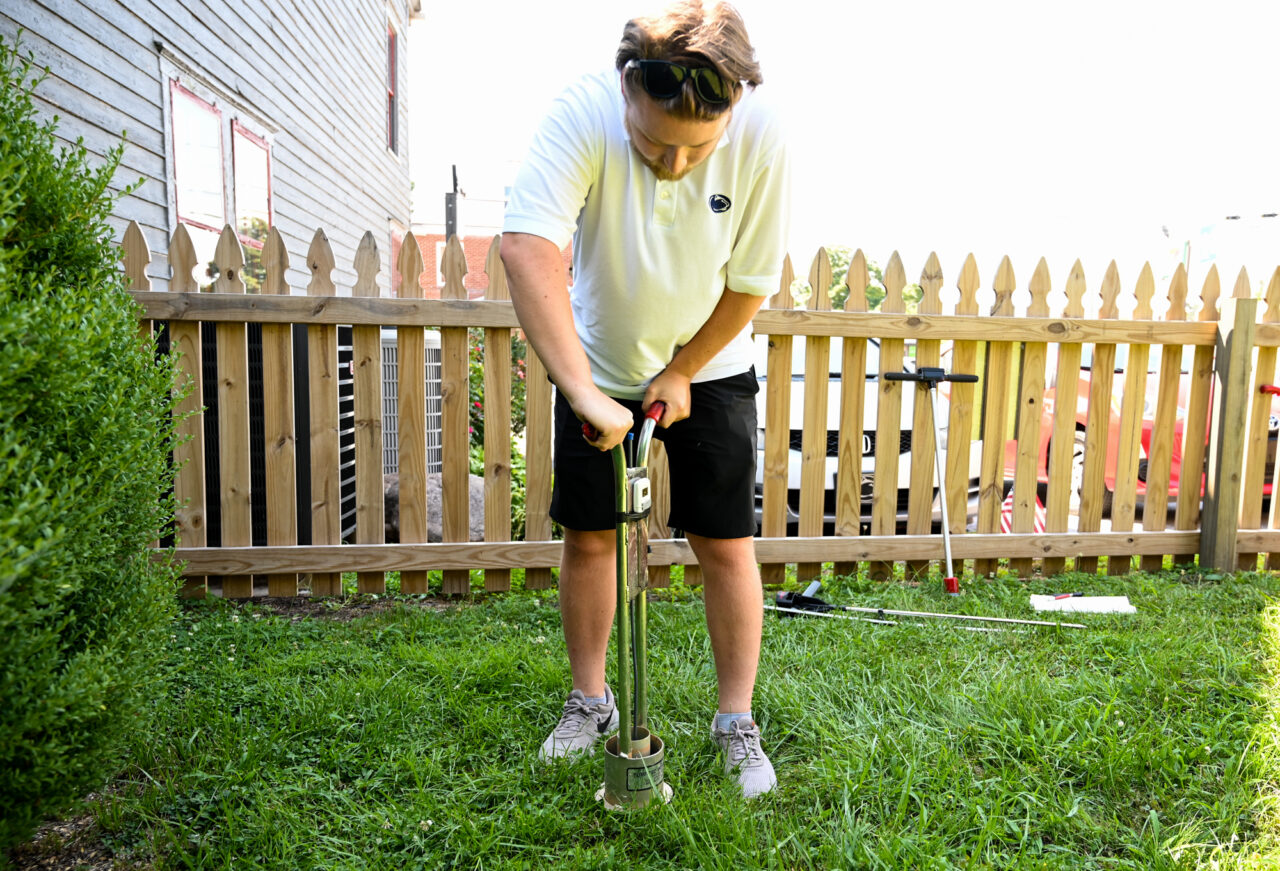 Travis Peters, 22, a chemical engineering major with a minor in environmental engineering at Penn State, places an Infiltrometer to test how fast water infiltrates the ground in Middletown on Friday, July 22, 2022. (Jeremy Long – WITF) 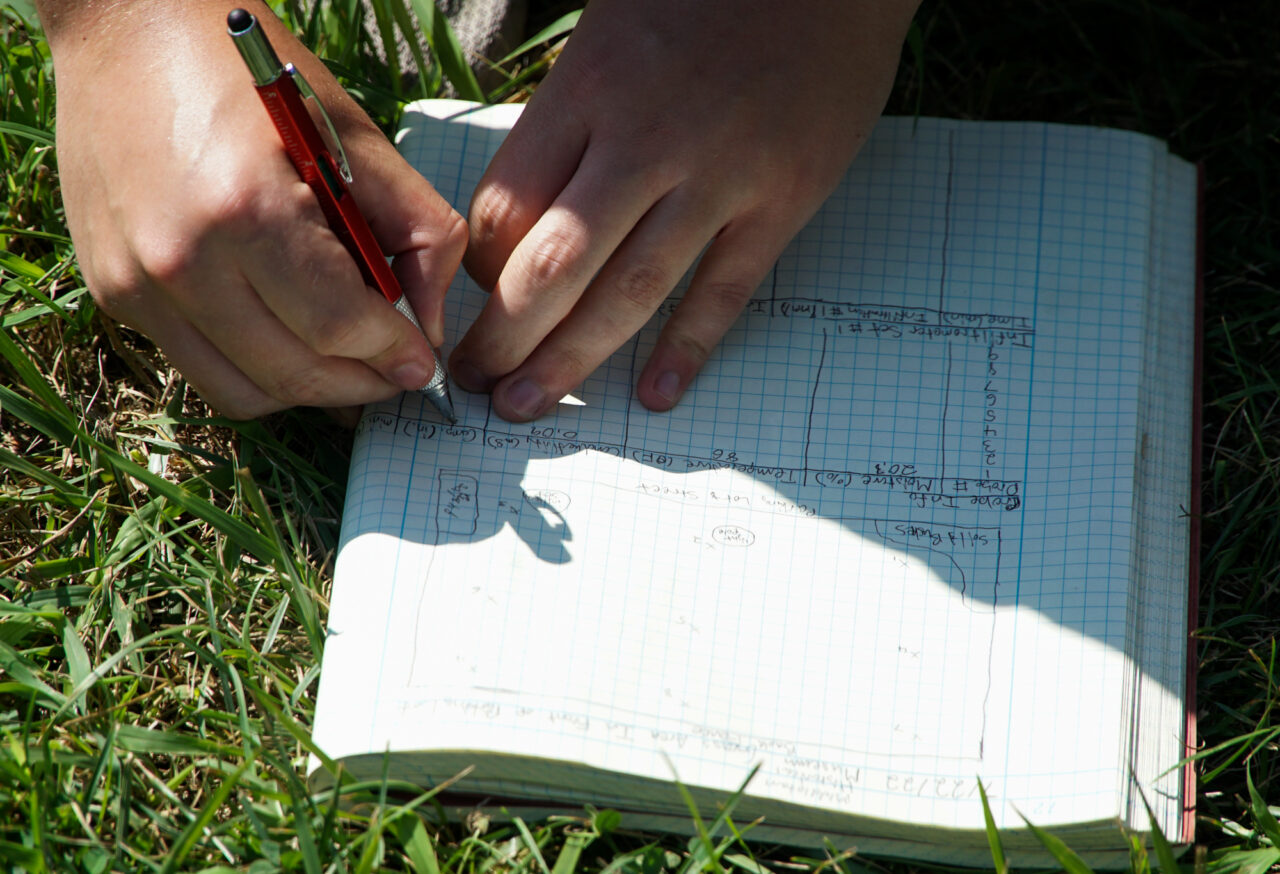 Travis Peters, 22, a chemical engineering major with a minor in environmental engineering at Penn State, records data from tests being done in a yard in Middletown on Friday, July 22, 2022. (Jeremy Long – WITF) 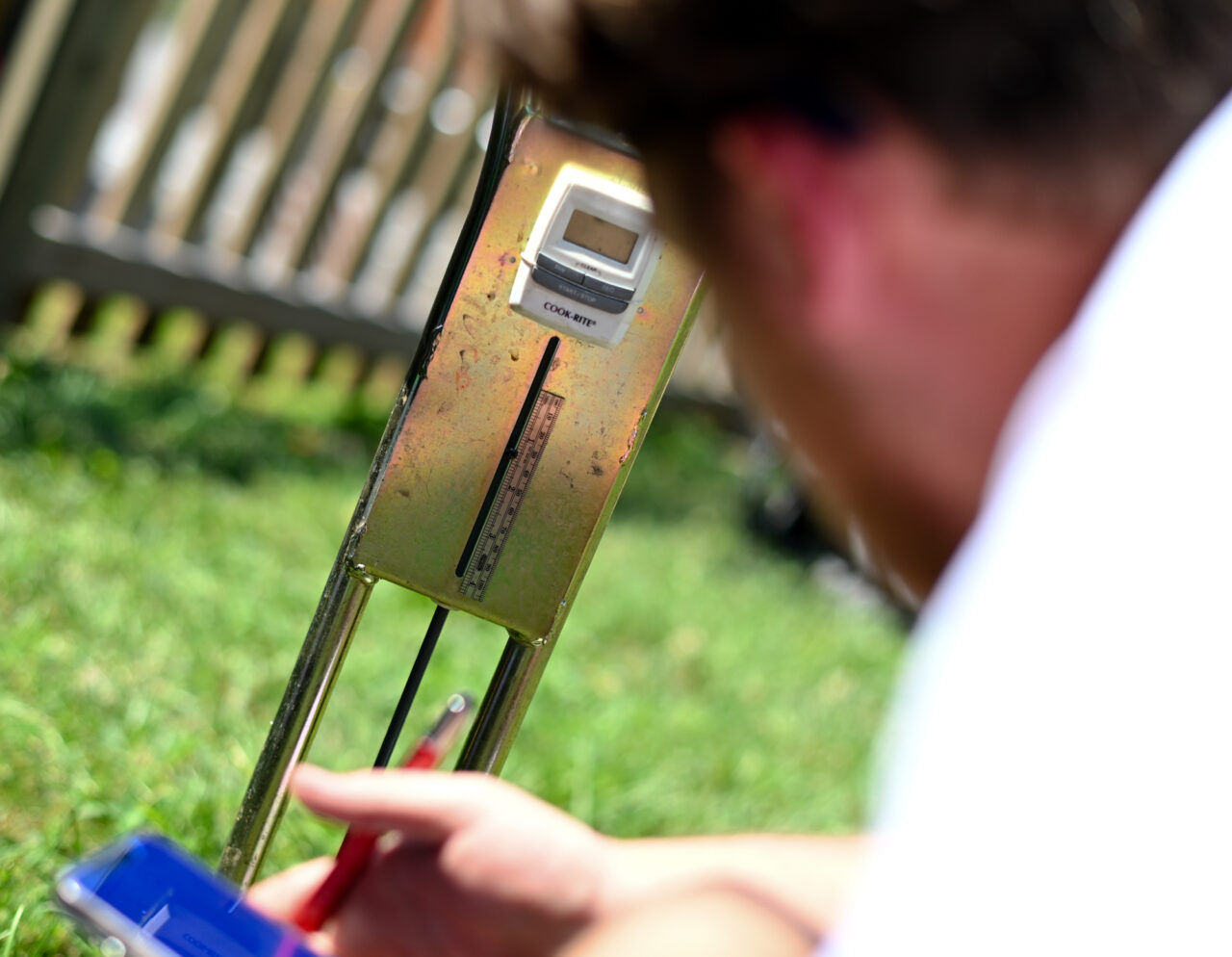 Travis Peters, 22, a chemical engineering major with a minor in environmental engineering at Penn State, records data from Infiltrometers to test how fast water infiltrates the ground in Middletown on Friday, July 22, 2022. (Jeremy Long – WITF)

Qualifying for federal assistance after a disaster is a complicated process. Damage costs have to meet a certain amount per-capita for people to get help. A state’s governor must request a disaster declaration from the president and show that the damage is beyond the ability of the state alone to respond. 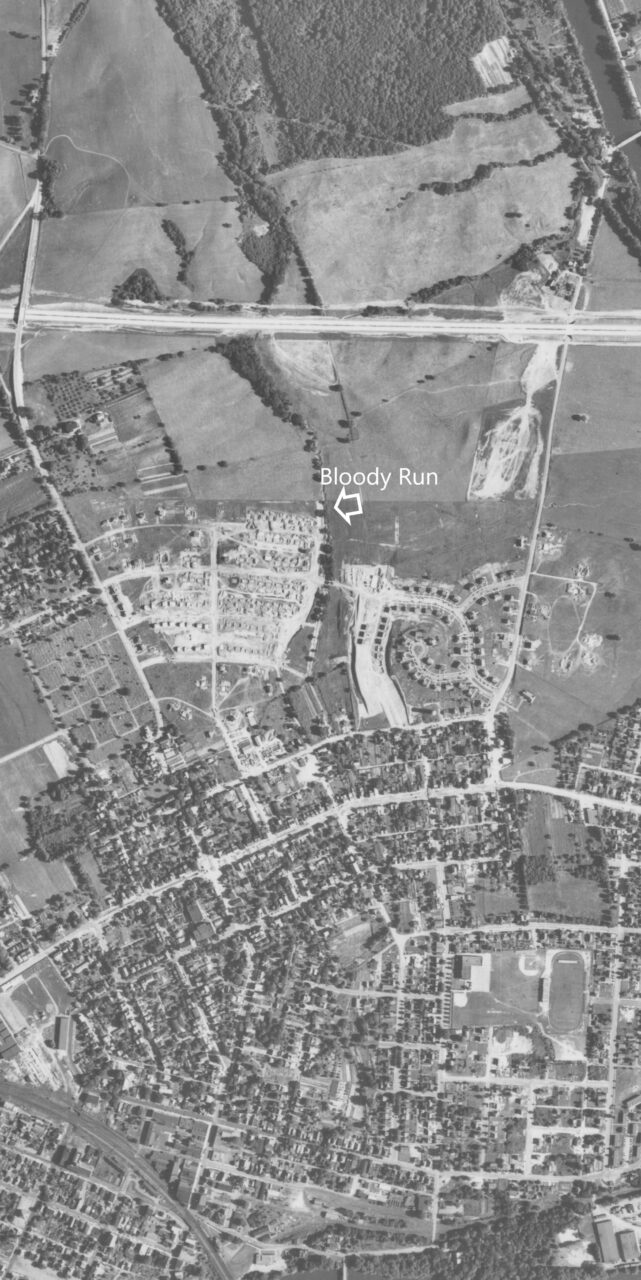 Bloody Run is marked on this aerial photograph of Middletown from the 1950s.

Floods that hit only a small area don’t usually cause enough damage to qualify for disaster relief money, which can add more strain to people trying to clean up. Samantha Sharp said her parents probably spent around $50,000 cleaning up after the 2011 and 2017 floods.

It will be up to the borough to use the information her team gathers to come up with fixes, though Middletown is under no obligation to follow recommendations from the researchers.

“The real goal is to get some on-the-ground data, so that when we start targeting solutions, we’re targeting the problem and we’re actually going to provide a solution,” Clark said.

Borough Manager Kenneth Klinepeter said he hopes the work from Clark’s team will show the borough where money will be best spent on solutions. He said the borough hasn’t upgraded its storm sewer system since he took the job in 2016. Once more data is available, engineers can determine what kinds of upgrades are needed.

For one example, the borough could look to Dubuque, Iowa. Starting in 1999, the city had six storms in a 12-year period that were declared federal disasters.

Those storms set the city on the path to a sweeping solution that included uncovering, or “daylighting,” a buried creek.

The former Bee Branch Sewer became the Bee Branch Creek again, with park space and walking trails. The city bought out about 100 properties to make room for the project, and move people out of the flood risk area.

Deron Muehring, a civil engineer for Dubuque who headed the Bee Branch program, said they tried to build for the future.

Usually engineers design for the 100-year event, meaning something with a 1 percent chance of happening each year. Dubuque built for the 500-year event.

“It made sense for us to design for that 500 years so that we were in a better position to accommodate whatever the future might hold in terms of rainfall,” Muehring said.

His advice for other cities trying to solve similar flooding issues: engage residents early in the process, and plan far in advance to be better able to take advantage of available grant money.

Muehring said communities shouldn’t be afraid to think big. He said if he had seen the plans for the final Bee Branch project 20 years ago, he wouldn’t have thought it was possible.

The plan did face criticism. Newspaper articles from the time show people were outraged that the city was considering demolishing homes. Some said the price offered for their properties wasn’t enough. And others did not want to see utility bills go up because of the upgrades.

But Muehring said the project is working. In July, the city broke a daily rainfall record with more than 2 inches in a few hours. In the past, Muehring said that likely would have caused flooding, but not this time.

He said now the Bee Branch Creek is seen as an asset. He even sees real estate listings advertising “Bee Branch frontage.”

Middletown and Dubuque have some similarities. Both sit on major rivers, the Susquehanna and Mississippi, and have buried streams.

But Middletown is a borough of less than 10,000 people, while Dubuque has nearly 60,000 residents. It cost about $160 million just to daylight Bee Branch, not including other infrastructure upgrades. The budget for solutions in Middletown will likely be smaller.

Dubuque’s Bee Branch project took more than a decade from design through completion.

Middletown is just getting started.