United States Post Office delivery trucks are reflected in the side mirror of a vehicle as postal delivers set off on their daily rounds as a statewide stay-at-home order remains in effect in an effort to reduce the spread of the new coronavirus Tuesday, March 31, 2020, in Arvada, Colo. The new coronavirus causes mild or moderate symptoms for most people, but for some, especially older adults and people with existing health problems, it can cause more severe illness or death. (AP Photo/David Zalubowski) 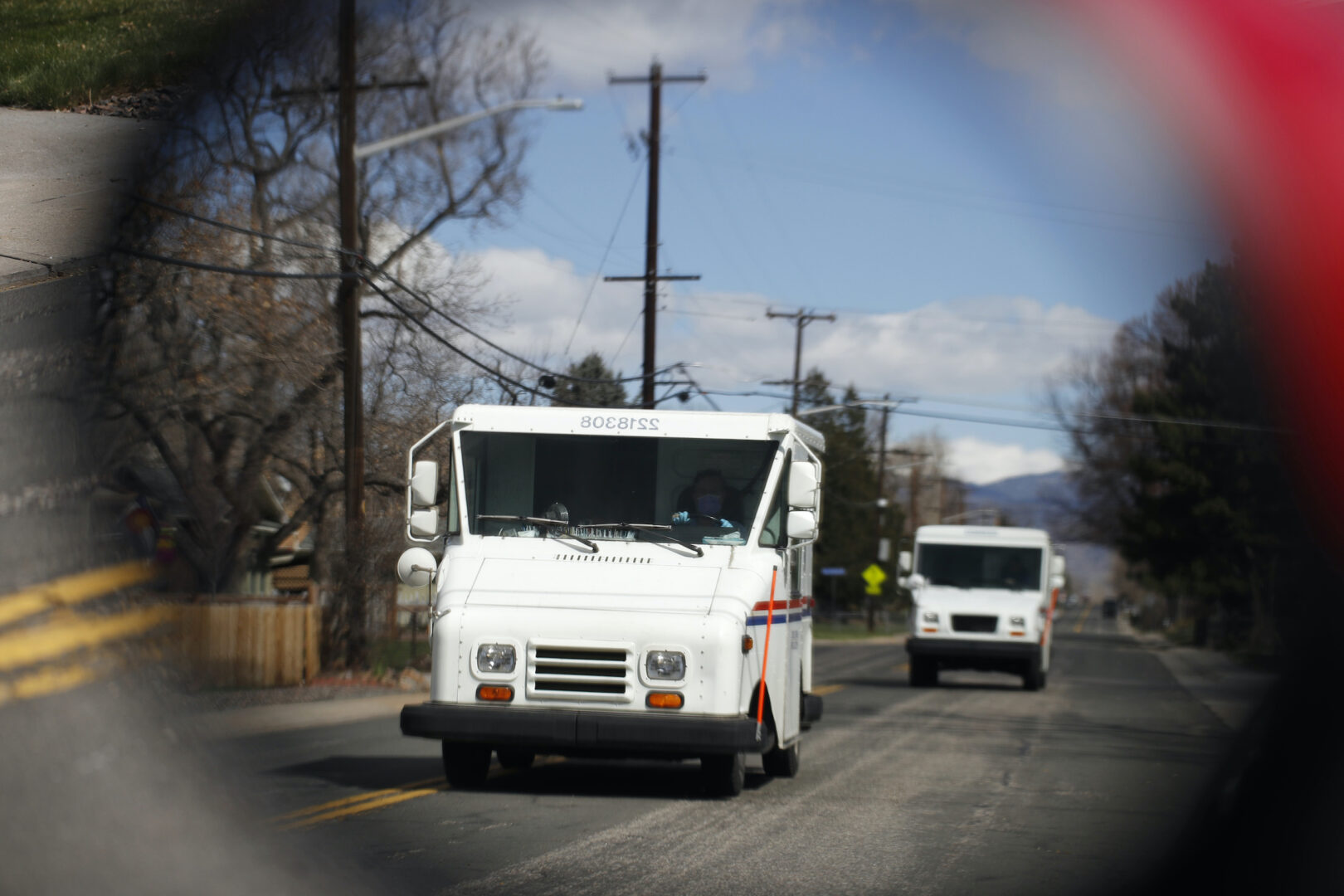 United States Post Office delivery trucks are reflected in the side mirror of a vehicle as postal delivers set off on their daily rounds as a statewide stay-at-home order remains in effect in an effort to reduce the spread of the new coronavirus Tuesday, March 31, 2020, in Arvada, Colo. The new coronavirus causes mild or moderate symptoms for most people, but for some, especially older adults and people with existing health problems, it can cause more severe illness or death. (AP Photo/David Zalubowski)

U.S. Postal trucks travel to every town, back country road, suburban cul-de-sac, and city street in the country, delivering cards, bills, and packages. With all their stopping and starting, they also emit tons of climate-warming greenhouse gas emissions, along with dangerous air pollutants that contribute to ozone and cause health impacts like asthma.

Advocates say the USPS fleet of delivery trucks is perfect for conversion to electric vehicles, which would be in line with state and federal climate goals.

But citing costs, the Postal Service’s plan to replace about 165,000 of the current gas guzzling delivery trucks includes just a fraction of EVs.

Sixteen states — including Pennsylvania, New Jersey, and Delaware — are now suing USPS over the plan. The Postal Service’s move has angered Democratic members of Congress, climate activists, and postal workers themselves.

“We believe that the electric vehicles are going to be the wave of the future,” said Michael Foster, director of the motor vehicle services division of the American Postal Workers Union (APWU). “The question is how soon will the Postal Service come into the future?” 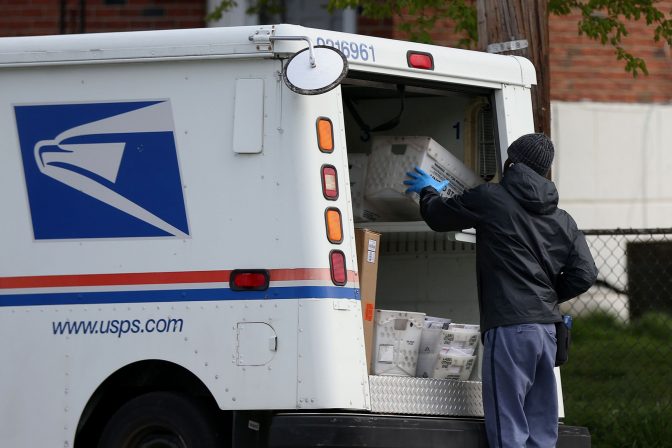 A USPS spokesperson, meanwhile, said the agency is “unaware of any significant delays or issues.”

Union ‘on board’ with electric vehicles

APWU represents about 200,000 retail clerks, as well as the mechanics and technicians who fix the delivery trucks, most of which are more than 30 years old. Foster says the union is on board with more EVs and wants to make sure members are trained to repair them. The Postal Service estimates the current fleet costs more than $700 million to maintain each year.

Building out the infrastructure to support EVs could also provide a national network of charging stations for the public, said APWU President Mark Dimondstein, which means the Postal Service could benefit twofold by generating revenue from needed infrastructure.

“As people travel with electric vehicles, they have to find a way to be able to charge up,” said Dimondstein. “It’s not free, but what a great way to have a real EV charging network throughout the vast postal infrastructure from the most rural outposts to urban centers.”

Dimondstein says the Postal Service should be on the forefront of the electric vehicle transition, not playing catch-up. Electrifying the Postal Service fleet would also help cut air pollutants in poor communities and communities of color that already suffer a disproportionate burden from industrial pollution and traffic.

The Postal Service increased the number of electric vehicles from 10% of the total purchase to 20% after its plan — dubbed Next Generation Delivery Vehicles — faced criticism. Recently, it announced it may expand the number of EVs even further after updating its environmental impact statement.

But until they see a major shift toward EVs, environmental groups remain skeptical.

The Postal Service faces three lawsuits over its plan to replace its aging fleet with more gasoline powered trucks, including the one filed by 16 states that include Pennsylvania, New Jersey, and Delaware. The lawsuits say the Postal Service violated federal law by not doing a proper environmental review under the National Environmental Policy Act (NEPA).

“This isn’t a small endeavor the Postal Service is setting out on,” said Pennsylvania Attorney General Josh Shapiro. “They’re working to replace the largest civilian fleet in the world. The scope of this is massive and will undeniably have a lasting impact on our environment. Which makes the fact that the process was hastily and sloppily done all the worse.”

Shapiro says the Postal Service failed in its Environmental Impact Statement (EIS) to consider the air quality, environmental justice or climate impacts of the purchase plan.

All three lawsuits say the Postal Service violated NEPA by not initiating an EIS until after it contracted with Oshkosh Defense to build 165,000 new trucks in Feb. 2021.

“This is a highly unusual move,” said Scott Hochberg, staff attorney for the Center for Biological Diversity. “The purpose of the environmental review is to inform the Postal Service’s decision not to rubber stamp a plan it already made.”

The center filed a lawsuit in conjunction with the Sierra Club and CleanAir Now, an environmental group based in Kansas, asking a judge to halt any payments until a new EIS is completed.

“In the EIS, USPS said that 5% of its routes were not suitable for EVs because of length or other considerations, but it never analyzed a 95% EV alternative,” said Hochberg.  “At the very least, even assuming USPS is right in its assumptions, 95% should be EVs.”

The lawsuits detail flawed analysis within the EIS, including overestimating the cost of electric batteries while underestimating the future cost of gasoline. The Postal Service assumed a gallon of gas would cost about $2.50 twenty years from now, about half of today’s price. 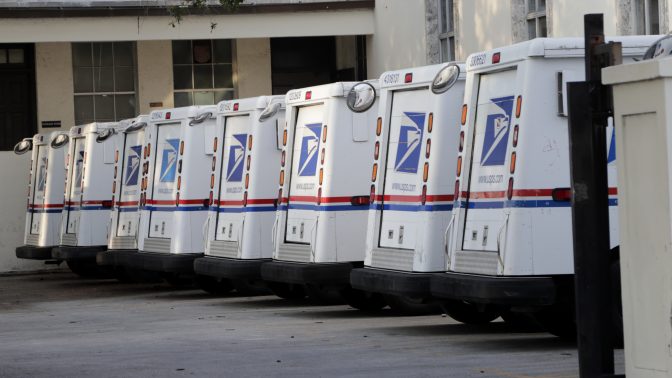 In this April 2020 photo, United States Postal Service trucks are lined up in Miami Beach, Fla. The agency says without emergency funding from Congress, it could run out of money within months.

Both the Environmental Protection Agency and the Council on Environmental Quality issued critical comments on the EIS. The EPA called it “seriously deficient.”

Speaking to the House Oversight and Reform Committee at a hearing in April, Jill Namaane, acting director of the physical infrastructure team for the Government Accountability Office, said the Postal Service also underestimated the savings from reduced greenhouse gas emissions and overestimated the costs of maintenance on electric vehicles.

“Our interviews with private delivery companies and Postal Service documents that show electric vehicles are expected to be less expensive to maintain,” she said.

At the same hearing, Victoria Stephens, executive director of the Postal Service Next Generation Delivery Vehicle Program, defended the plan, saying the costs would be too high to commit to more EVs. Stephens told the committee it looked at more than 200,000 carrier routes, assessed fuel and maintenance costs, as well as the cost to purchase EVs and build the charging stations.

“We found that the benefits are not enough to overcome the higher costs over the 20-year life of the vehicle,” she said.

A Postal Service spokesperson defended the work on the EIS, saying those criticizing the review ignore differences between the postal trucks and the delivery vans used by their competitors. “Our vehicles… travel short distances between hundreds of curbside boxes, and stop and start frequently throughout the day,” said Postal Service spokesperson Kim Frum in an email.

“Similarly, those criticisms turn a blind eye to our unique service requirements, which necessitate that we deliver mail to delivery boxes on posts,” she wrote. “These service requirements make commercial off-the-shelf vehicles particularly unsuitable for certain routes, and the right-hand drive purpose-built NGDVs we are acquiring defy cost and environmental comparison made by observers who are not fully informed.”

The Postal Service EIS estimated the new vehicles would emit 309,270 metric tons of carbon dioxide annually. EPA’s estimates are triple that amount at 975,534 metric tons. The new gas- powered vehicles don’t get much more for the gallon, either. Without air conditioning, the new trucks average 14.7 miles per gallon, but air conditioning reduces that to 8.6 mpg. The current vehicles run an average of 8.2 mpg, and in 2020, burned 180 million gallons of gasoline. 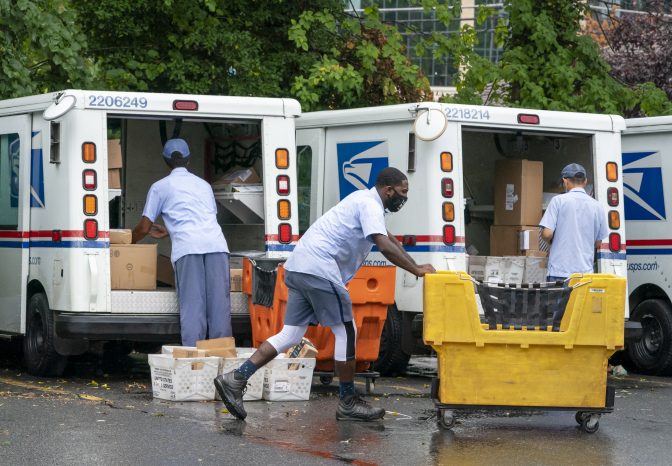 The bipartisan effort that left the EVs on the table

The Postal Service Reform Act passed in March with bipartisan support to shore up the troubled agency’s finances. But the legislation didn’t address the issue of electric vehicles, because the parties couldn’t agree.

At the April hearing of the Committee on Oversight and Reform addressing the Postal Service fleet, Republican Congressman James Comer accused Democrats of pushing a political agenda.

Postmaster General Louis DeJoy, hired by the Trump-appointed Board of Governors, announced this month he could be open to purchases of more EVs.

“As I noted when we placed our initial NGDV delivery order, the Postal Service would continue to look for opportunities to further increase the electrification of our fleet in a responsible manner, as we continue to refine our operating strategy and implement the Delivering for America plan,” said DeJoy in a statement.

Hochberg says it’s unclear if an updated EIS will address all of the deficiencies outlined in the lawsuits and until then, the cases will go forward. The lawsuits demand a halt to all payments until the Postal Service conducts a new EIS.

“The consequences of this are huge,” he said. “The current plan locks in pollution to every American community for decades, and that’s unacceptable when the federal government is trying to do everything it can to transition us off of fossil fuels and towards electric vehicles.”