In US, Pennsylvania and other states struggle to replace fossil fuel tax revenue

In April, the commonwealth became the first major fossil-fuel state to adopt a carbon-pricing policy. 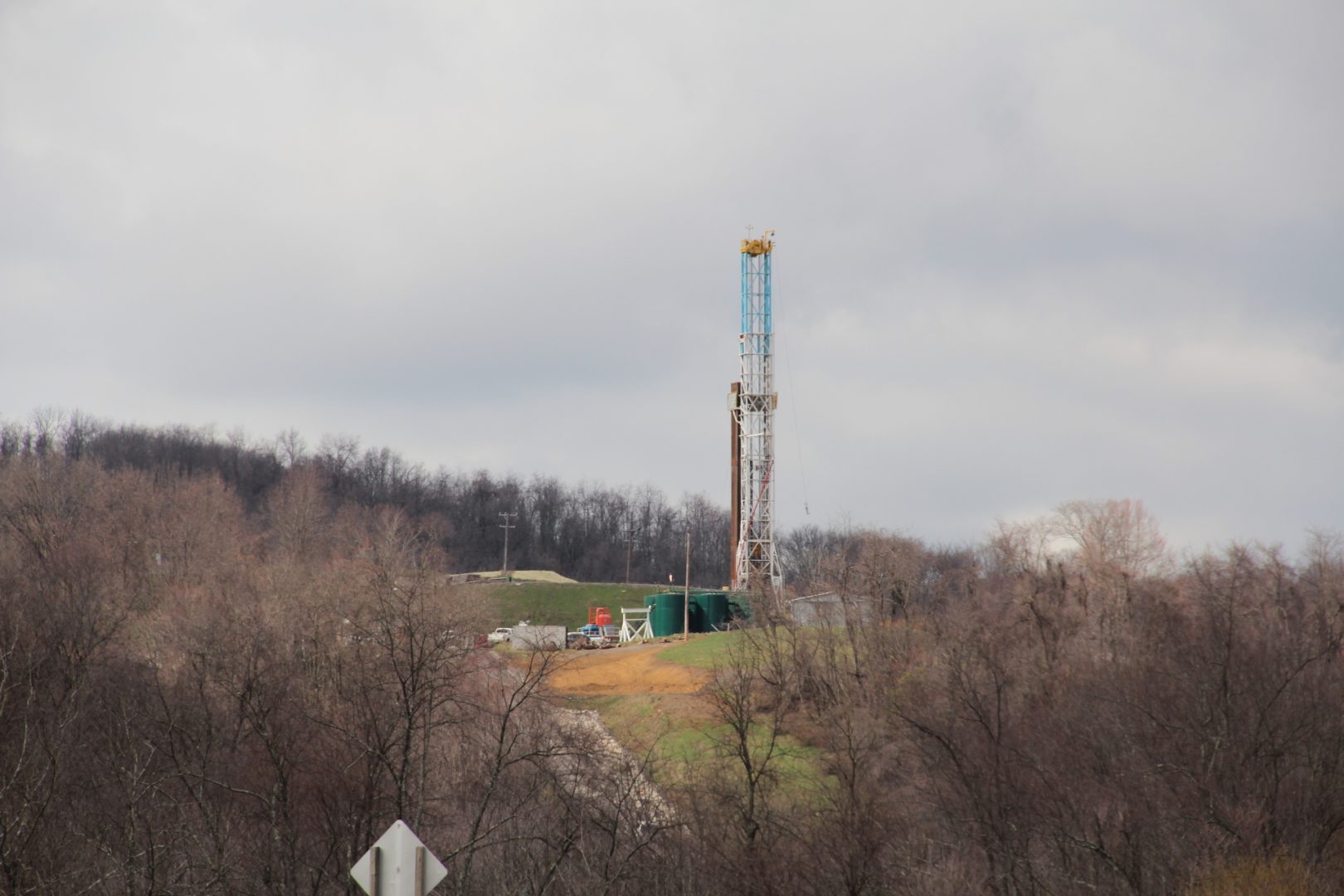 (Santa Fe, N.M.) — Government budgets are booming in New Mexico: Teacher salaries are up, residents can go to an in-state college tuition-free, moms will get medical care for a year after childbirth, and criminal justice initiatives are being funded to reduce urban violence.

The reason behind the spending spree — oil. New Mexico is the No. 2 crude oil producer among U.S. states and the top recipient of U.S. disbursements for fossil fuel production on federal land. But a budget flush with petroleum cash has a side effect: It also puts the spotlight on how difficult it is to turn state rhetoric on tackling climate change into reality.

None of that would be possible without oil revenue, said schools superintendent Gerry Washburn.

“We can’t slow down in that area and what we do to fund schools until we have a legitimate replacement” for oil and natural gas income, he said. “Whether you’re in the middle of the oil patch or in an area with no oil and gas drilling going on, those policies are going to impact revenue in every school district in the state.” 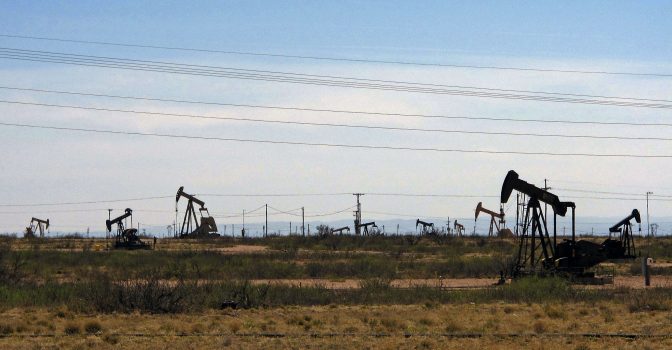 Oil rigs stand in the Loco Hills field along U.S. Highway 82 in Eddy County, near Artesia, N.M., one of the most active regions of the Permian Basin.

Federal, state and local governments receive an estimated $138 billion a year from the fossil fuel industry, according to a study from the Washington-based nonpartisan economics group Resources for the Future, which does not advocate on energy policies. That’s equivalent to the annual state spending of New York and Texas combined.

The cashflow is dominated by gasoline and diesel retail taxes in every state, but energy-producing states have the deepest dependence on fossil fuel income through a gamut of taxes, royalties, lease sales and fees. Because that revenue helps pay for government services, they tend to tax residents less, said Daniel Raimi, a fellow at Resources for the Future, and co-author of the study.

“That’s a really challenging dynamic if you think about a shift away from fossil fuels,” he said. “They’re going to be faced with the question: Do we raise our taxes on our residents or do we reduce the level of services we provide?”

In New Mexico, oil and gas account for 42% of state government income, a share that is rising amid the war in Ukraine and record-setting oil production in the Permian Basin that stretches across southeastern New Mexico and western Texas. Additional oil income flows to a new interest-bearing trust for early childhood education.

At the same time, legislators balked this year at climate initiatives that might restrain petroleum production. They rejected a bill to limit climate-warming pollution in the production and distribution of transportation fuels, a step taken by West Coast states. New Mexico also shunned a state constitutional amendment for the right to clean air.

Democratic Gov. Michelle Lujan Grisham, up for reelection in November, said her administration is working to contain oilfield methane pollution and diversify the economy. New mandates call for electricity production from solar, wind and other renewable sources. But she has cautioned the federal government against significant restrictions on oil exploration and production, still the lifeblood of the state budget. 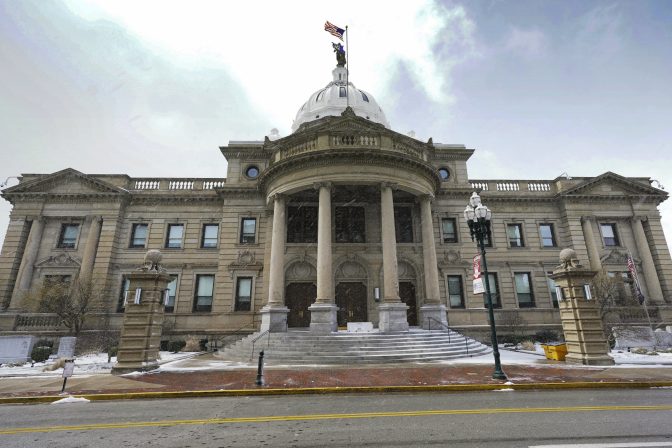 “We can work very effectively with oil and gas producers to both meet clean energy standards … while still managing pretty incredible exploration of fossil fuels to meet the current energy demands of the world,” the governor said in April.

Preserving income from oil, natural gas or coal production while acting on climate change can be especially tricky in blue states where Democrats often campaign on tackling global warming.

But Polis, a wealthy tech entrepreneur, last year threatened to veto a proposal that might impose per-ton emission fees on polluters. William Toor, executive director of the governor’s Colorado Energy Office, said the state’s not targeting fossil fuel production — only the industry’s emissions.

“I agree with the overall mission of reducing greenhouse gas, but there’s an environment that exists at the state Legislature that we must electrify everything, we must mandate it, we must do it now,” James said. “And these technologies are not yet ready for prime time. We simply don’t have the capacity to do it.”

Some major petroleum producing states are forging ahead with their climate agendas.

Pennsylvania in April became the first major fossil-fuel state to adopt a carbon-pricing policy, joining an 11-state regional consortium that sets a price and declining limits on carbon dioxide emissions from power plants.

Democratic Gov. Tom Wolf’s initiative comes without approval from the Republican-controlled Legislature in the nation’s No. 2 state for natural gas production — and a major exporter of gas-generated electricity. A per-well drilling fee on the state’s booming Marcellus Shale gas industry has rained cash on rural counties and municipalities for nearly a decade.

South of Pittsburgh, Washington County reaped over $100 million in the past decade. That’s equivalent to $500 per resident — a “game changer,” said county board chairwoman Diana Irey Vaughan. The windfall paid for park and bridge improvements, among others.

Democratic state Rep. Greg Vitali, an advocate for stronger climate change action, said local governments relying on gas drilling money will simply have to use traditional tools such as property taxes to get by. 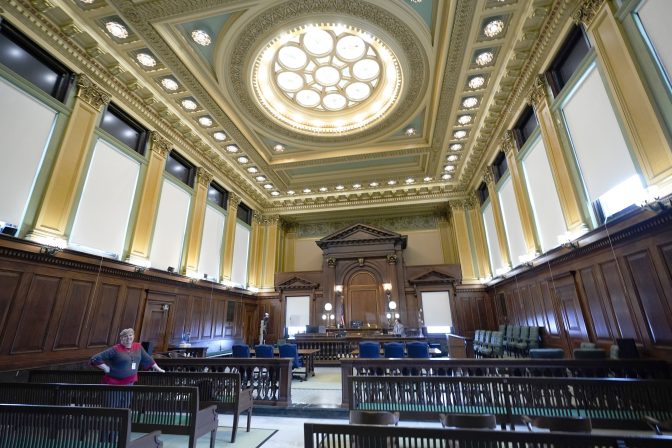 The new windows that were replaced with funding from shale gas fees line the walls of a courtroom at the county courthouse in Washington, Pa., March 28, 2022.

Republican-dominated Wyoming, the top coal production state, has bold goals to reduce greenhouse emissions to less than zero even while fossil fuels account for over half its revenue.

That vision relies on eventually capturing carbon dioxide from coal- and gas-fired power plants and pumping it underground, possibly to increase oil production in aging fields in the middle of the state. Wyoming leaders are also looking to alternative fuels like hydrogen and nuclear power, using reactors that produce less waste.

The state — one of only two with no taxes on individual income, corporate income or gross receipts — must confront its dependence on fossil fuel money eventually, said Jennifer Lowe, executive director of the Equality State Policy Center, a government watchdog group.

“At some point, there’s going to have to be a come-to-Jesus moment,” Lowe said.