Gas is needed for now but methane leaks make it ‘no better than coal,’ Lord Stern says 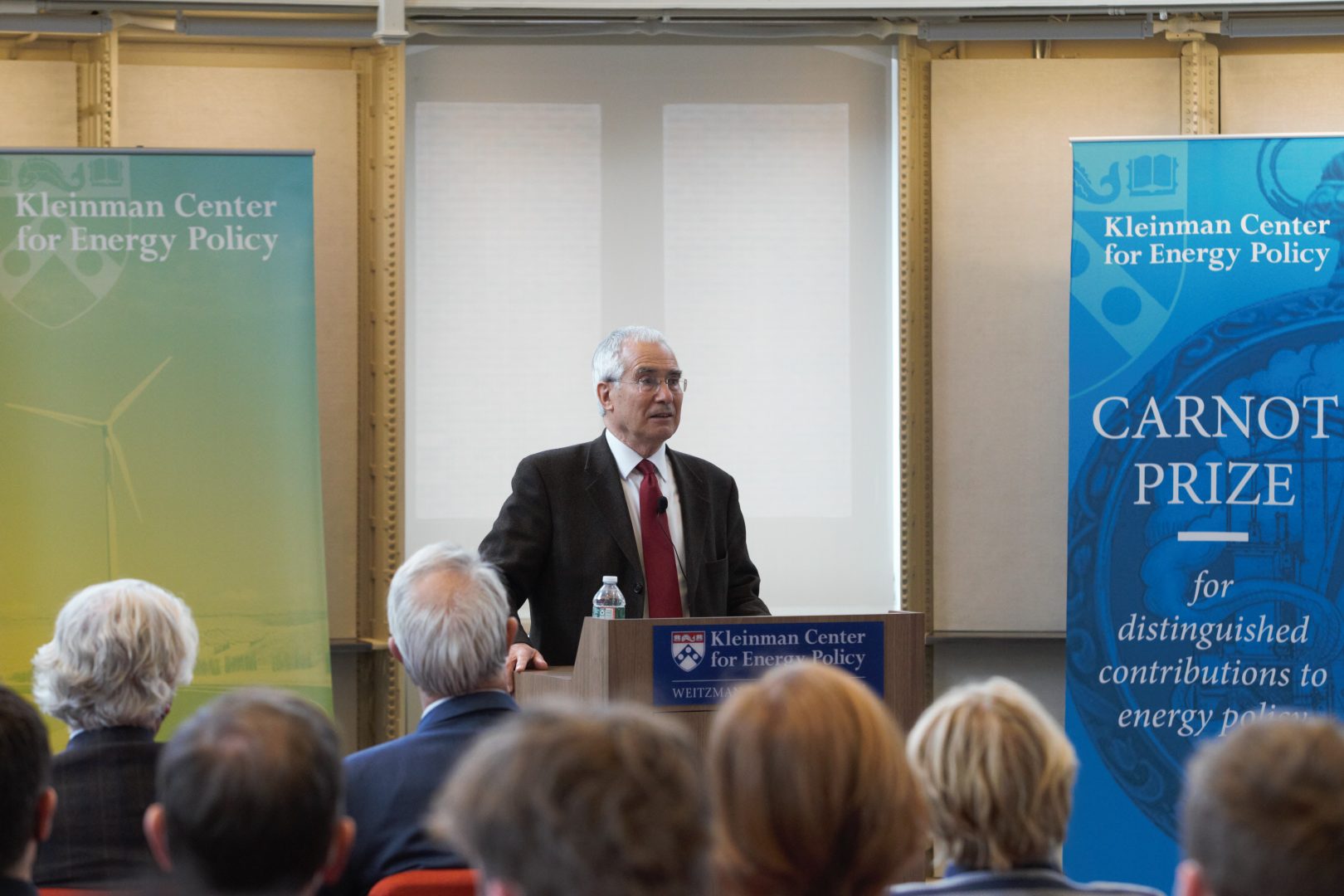 The world has no hope of meeting an international goal for limiting the global average temperature rise if leading energy-producers like Pennsylvania exploit fossil fuel reserves indefinitely, the recipient of this year’s Carnot Prize for energy policy research said Tuesday.

Lord Nicholas Stern, a London School of Economics professor who wrote landmark studies of the economic impacts of climate change in 2006 and 2015, said natural gas is needed for now but should be phased out in the “medium term” as part of the global effort to switch to renewable fuels.

“There’s no way the world can use the fossil fuels in the amount that it has, whether it’s coal or gas, and still stay within 1.5 degrees” – the United Nations’ target for the rise in the global average temperature compared with pre-industrial levels – Stern said in an interview before receiving the prize at the University of Pennsylvania’s Kleinman Center for Energy Policy.

“We know that a lot of it will have to stay in the ground,” he said. “We couldn’t possibly burn what we know about without destroying the world. So the question is how you slow down and where you slow down.” 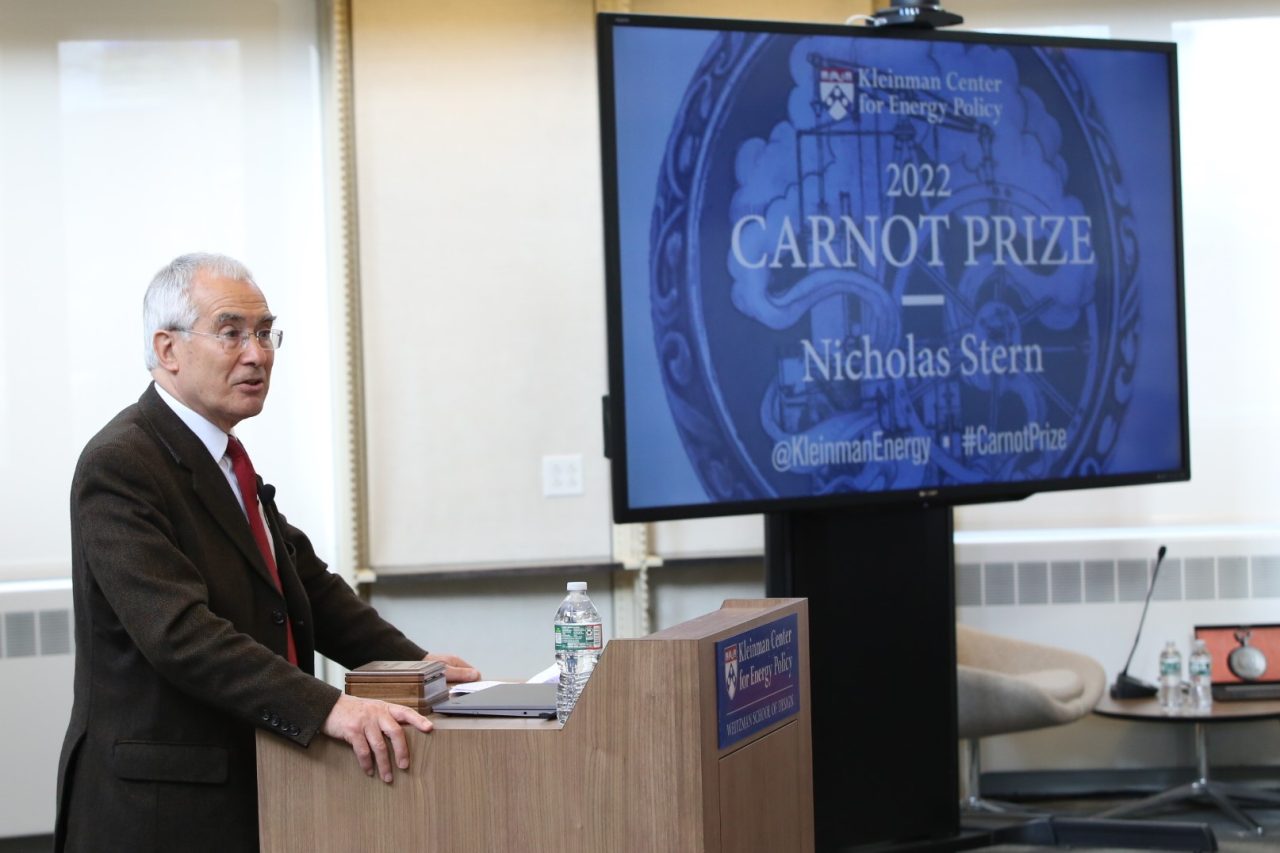 Natural gas, which generates about half of Pennsylvania’s electricity, should not be allowed to leak during production, because the resulting methane emissions are potent greenhouse gases, he said.

“Natural gas is leaky; it doesn’t have to be, but it is, and if you leak 2-3 percent of it, it’s no better than coal,” Stern said. “We are going to need natural gas for a bit so the challenge then is to get it produced where it’s cheapest and least leaky. But we should be planning on running it down.”

Stern’s report 16 years ago called for “strong and early action” to cut fossil fuel use and curb greenhouse gas emissions. He noted then that although the cost to the world economy of widespread switching to renewables would be about 1 percent of global GDP, the cost of inaction would around 5 percent. He said Tuesday that the cost of failing to act is now far higher.

At the time of the first report, there were worrying signs that climate change was spinning out of control, and the signs are far more worrying now, he said, citing the recent loss of Arctic permafrost, and the consequent increase in methane emissions; the potential destruction of the Amazon rain forest; and the feared melting of the West Antarctic ice sheet, which would rapidly raise the global sea level.

Those effects might have been avoided if policymakers had acted on the recommendations of the 2006 report, he said.

“The probability of catastrophe could have been cut very strongly if the kind of actions we are contemplating now had been delivered 15 years ago. But the world has been quite slow in getting there,” he said.

Now, the world will likely overshoot the rise of 1.5 degrees Celsius (2.7 degrees Fahrenheit) that the UN’s International Panel on Climate Change has set as a target for averting the worst effects of climate change.

“It’s pretty clear that we are putting out greenhouse gases at a rate that’s going to take us beyond 1.5,” he said. “We’re likely to go past it but we’ve got a chance, as we get better at extracting carbon dioxide, of stabilizing it and bringing it down.”

In his speech at the prize ceremony, he said current emissions suggest the world is headed for a rise of about 3 degrees Celsius, which would mean the movement of “hundreds of millions, perhaps billions” of people in response to rising seas, fires, heatwaves, floods and other climate effects.

But the target could still be hit with a sustained effort to cut emissions, and with the preservation and expansion of carbon sinks such as forests and wetlands, he said.

He praised gains in technology that show the world is capable of controlling climate change if policymakers choose to. He cited a dramatic fall in the price of solar energy that has produced “round the clock” solar production in India, Chile and many other countries. Offshore wind power, which has seen technological gains as well as increasing adoption, is now producing power in Britain that’s cheaper than that from fossil fuels.

Stern said the private sector, notably the car industry, is probably now ahead of government in adopting clean technology, and recognizes that its economic future lies in low-emissions products.

“Who would have thought then that all the major car companies would have been declaring the end of the era of the internal combustion engine, and that the storage power of batteries would go the way it’s gone?” he asked.

Asked why the world hasn’t made more climate progress since his first report, Stern blamed a human tendency to procrastinate; a reluctance by developing countries to invest in clean energy because they thought it would hinder growth; and efforts by “vested interests” to sow doubt about climate science. Much of the denial of climate science comes from North America, he said.

The war in Ukraine has revived a need for energy independence, and could be a new opening for adoption of renewables, he said.

Mark Alan Hughes, the founding faculty director of the Kleinman Center, said Stern has used economic analysis to show how to achieve a transition to sustainable energy.

“Nicholas Stern sounded an early alarm on the economic impacts of climate change, but even more significantly he has contributed his economic analyses to other scientific perspectives that together provide broader guidance to decision-makers toward a cost-effective transition to a sustainable energy system consistent with the challenges of climate risk,” Hughes said in a statement.

For Stern, he says there’s a big gap between the ability to act on climate and the willingness to do so.

“By bringing the right policies to bear, we can have stable, resilient, inclusive growth story for the 21st century,” Stern said. “I’m very optimistic about what we can do; I worry greatly about what we will do.”