Driving an EV in Pennsylvania: range anxiety, charging and maintenance

We asked for your questions about EVs. Here's what we found out 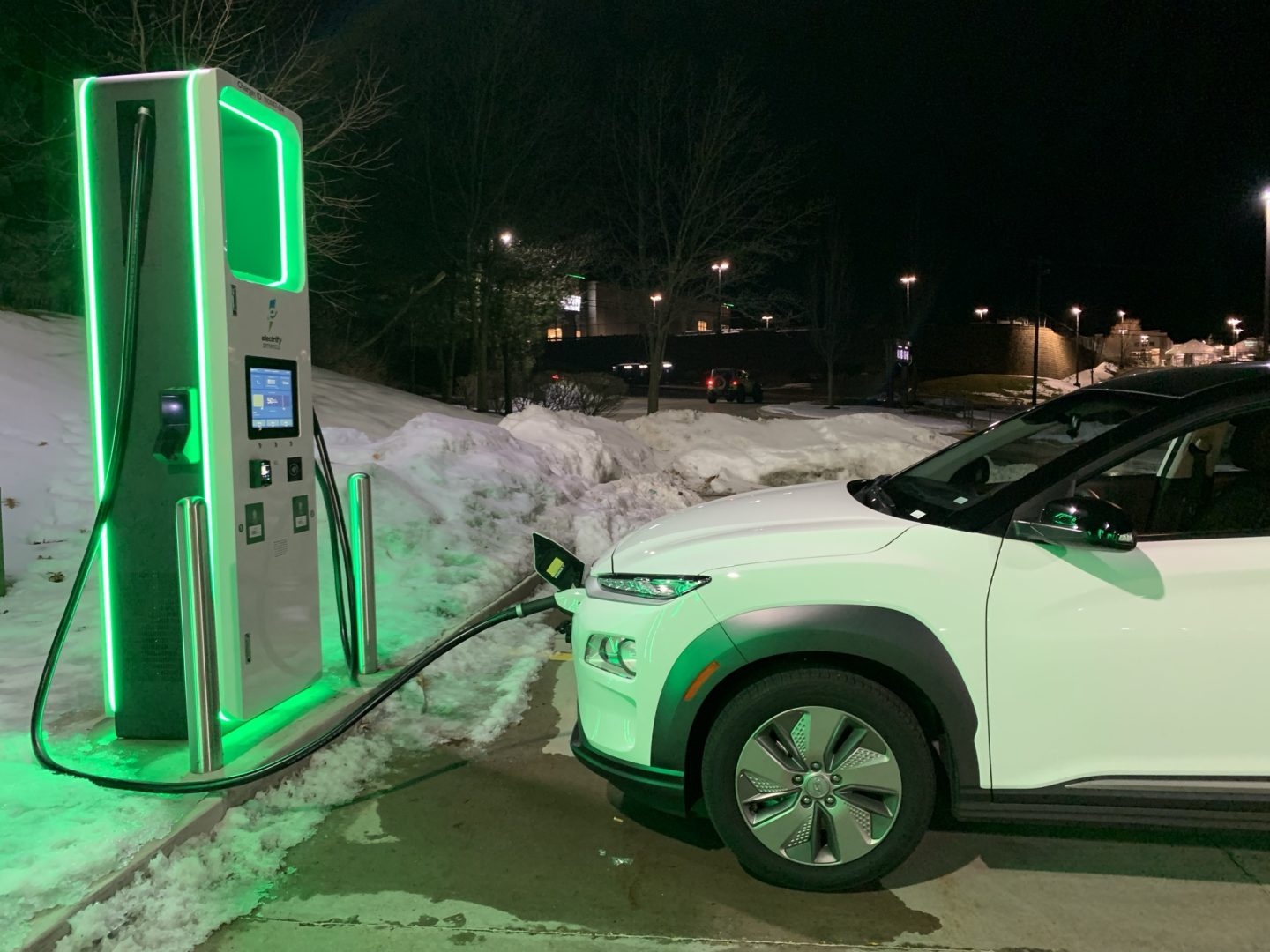 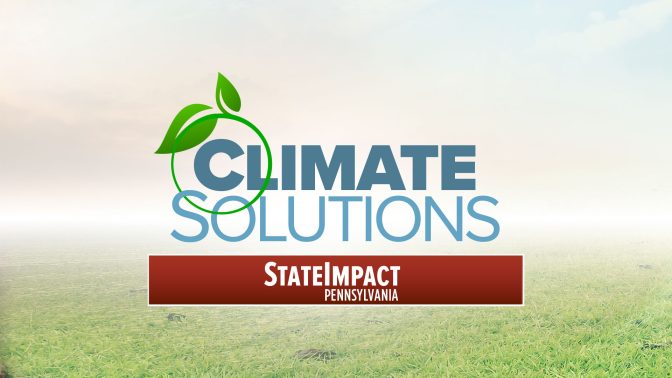 This story was produced as part of Climate Solutions, a collaboration focused on community engagement and solutions-based reporting to help Central Pennsylvania move toward climate literacy, resilience and adaptation. StateImpact Pennsylvania is a Climate Solutions partner. Take our short survey and tell us what matters to you.

Major automakers had already announced big plans to go electric–and that was before overseas conflict pushed gasoline prices well over $4 a gallon.

Also, EVs are one solution to reducing greenhouse gas emissions from transportation–which makes up a third of the country’s emissions.

So, Climate Solutions asked for your questions about electric vehicles.

To get answers, I did a couple of things: I rented a Hyundai Kona Electric for one week and spoke to a few experts. Here’s what I found out:

Listen to my essay about driving the EV:

What maintenance costs do I need to factor in with an EV?

Electric vehicles are simpler than ones with internal combustion engines (ICE), so they need less maintenance.

The United States Department of Energy estimates it costs about 40% less to maintain a light-duty EV than a similar ICE vehicle, because an EV does not have engine oil, a timing belt, an oxygen sensor, spark plugs or other components of a gas vehicle. 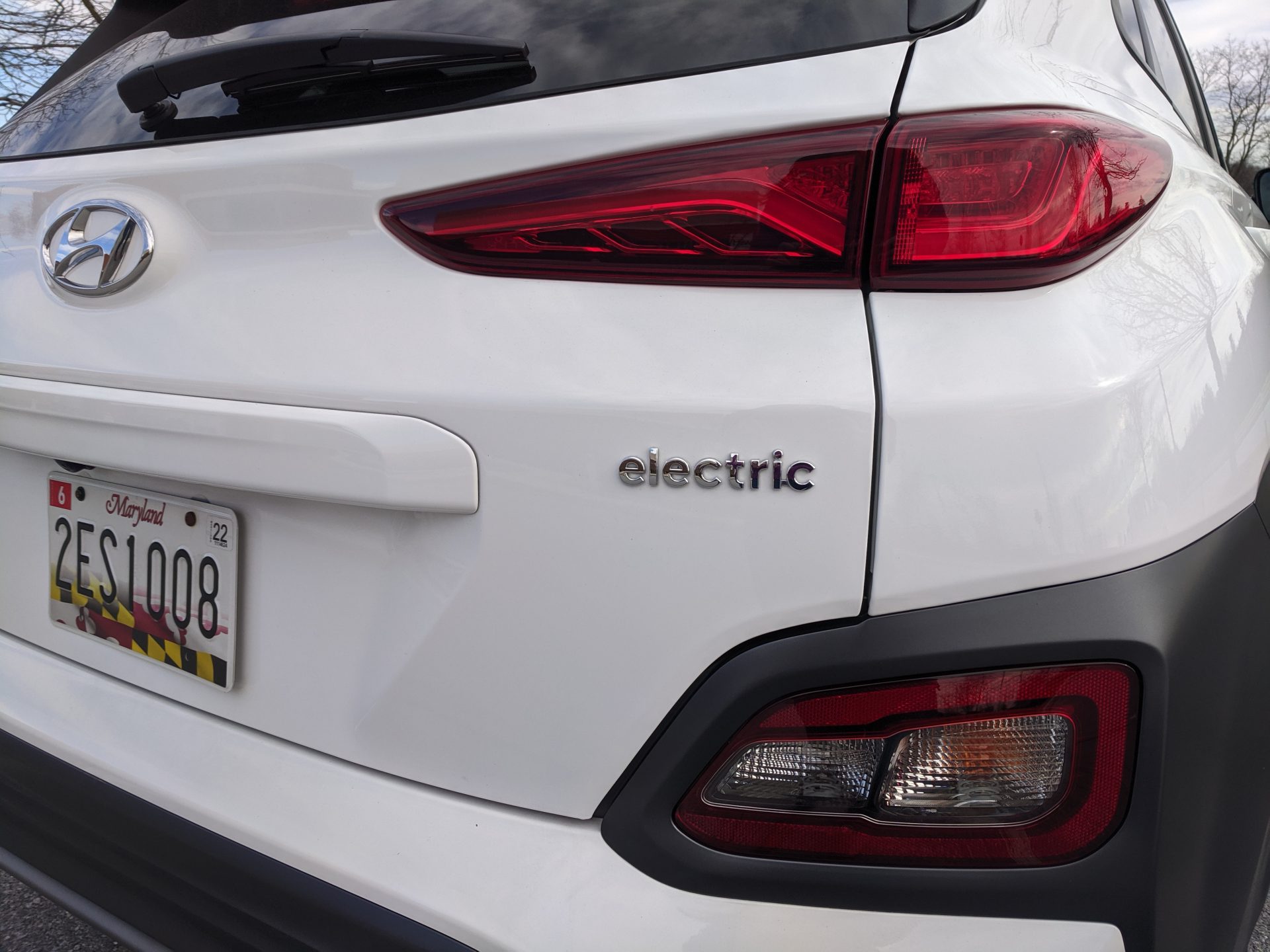 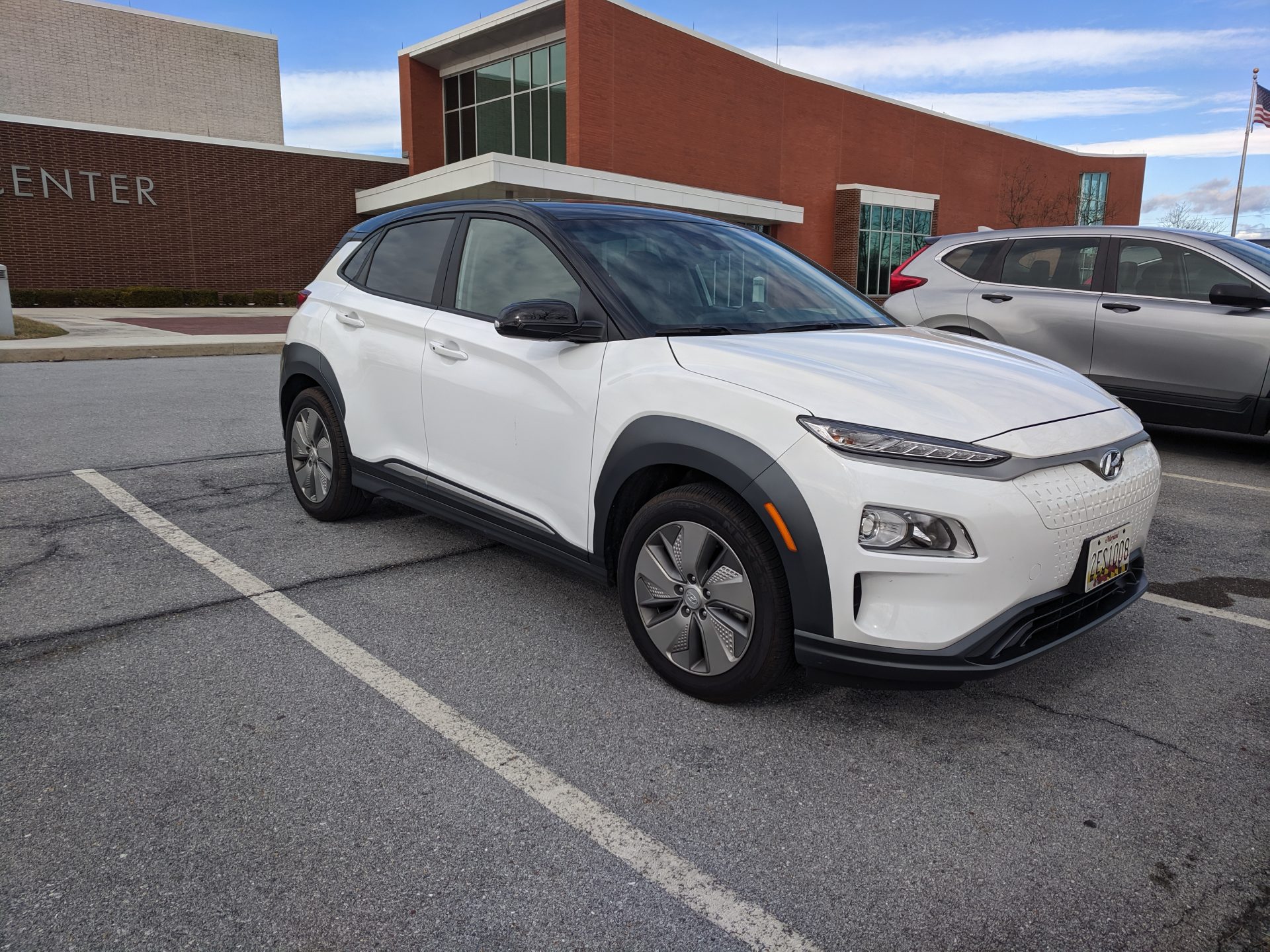 The Hyundai Kona Electric Climate Solutions rented for one week.

Some have found that EVs come with higher costs in the first couple years of ownership, though not all of that would be on the owner as many would be covered by the manufacturer.

A Car and Driver analysis from 2020, which factored in depreciation, found the electric versions of the Mini Cooper and Hyundai Kona cost more to own in the first three years than their gas counterparts.

We Predict, an analytics firm with offices in Michigan and the United Kingdom, compiled millions of dealership repair orders to calculate costs from maintenance, repairs, and service campaigns in the first three years of ownership.

It found that, in the first three months to one year of ownership, EVs cost between 2.5 and 3 times more to service than ICE vehicles. Much of that fell under warranty and so the costs were mostly on the manufacturer.

Renee Stephens, We Predict’s Vice President of Automotive, said, in the first year, the average EV in their analysis cost $341 in repairs, $108 in service campaigns, and $14 in maintenance.

After three years of ownership, We Predict found the cost of servicing EVs was less than gas vehicles, because maintenance was less and the price of repairs evened out. 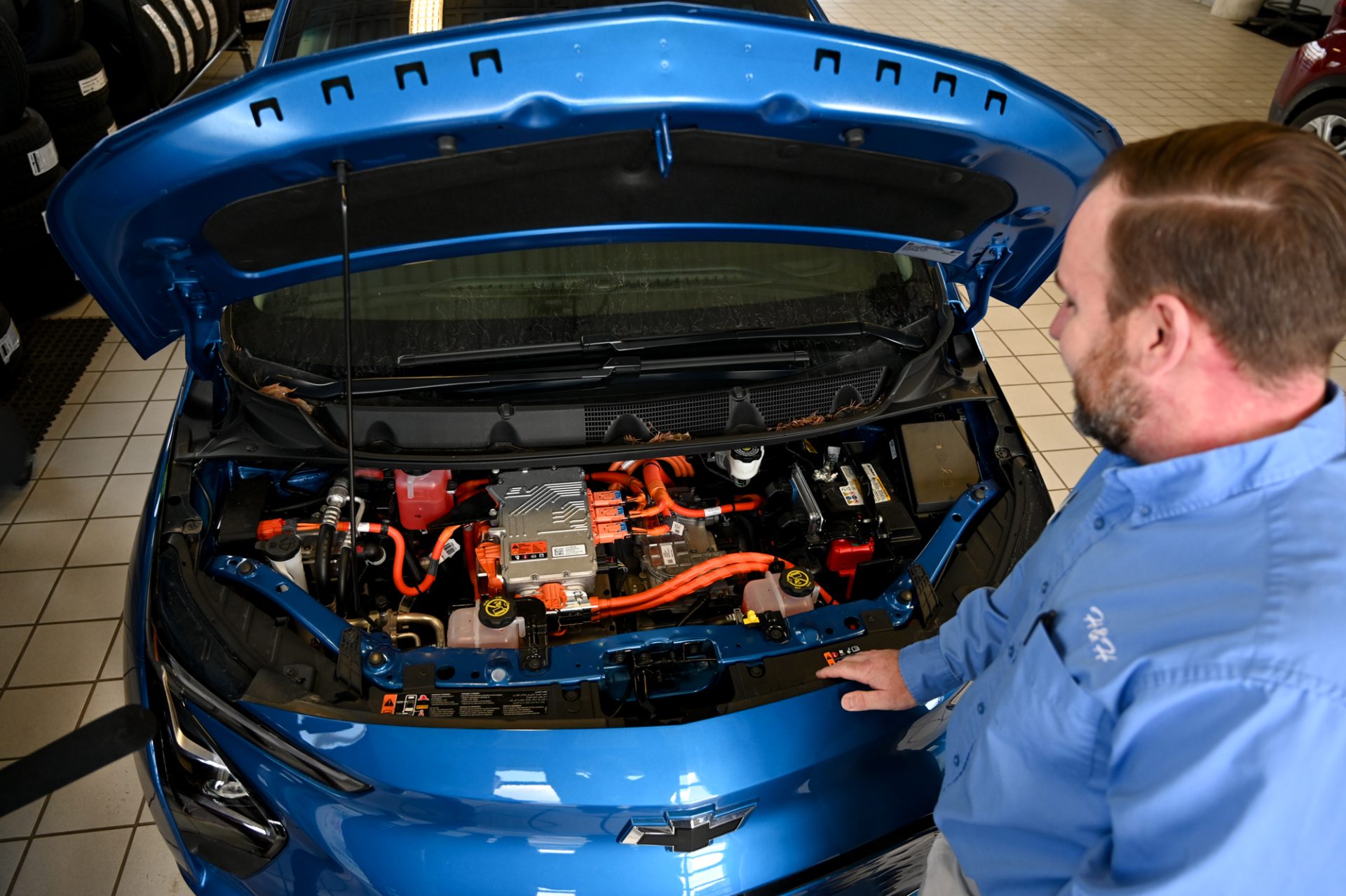 Chuck Raudabaugh, service manager at H & H Chevrolet in Shippensburg, explains what’s under the hood of a 2022 Chevy Bolt on Fed. 14, 2022. 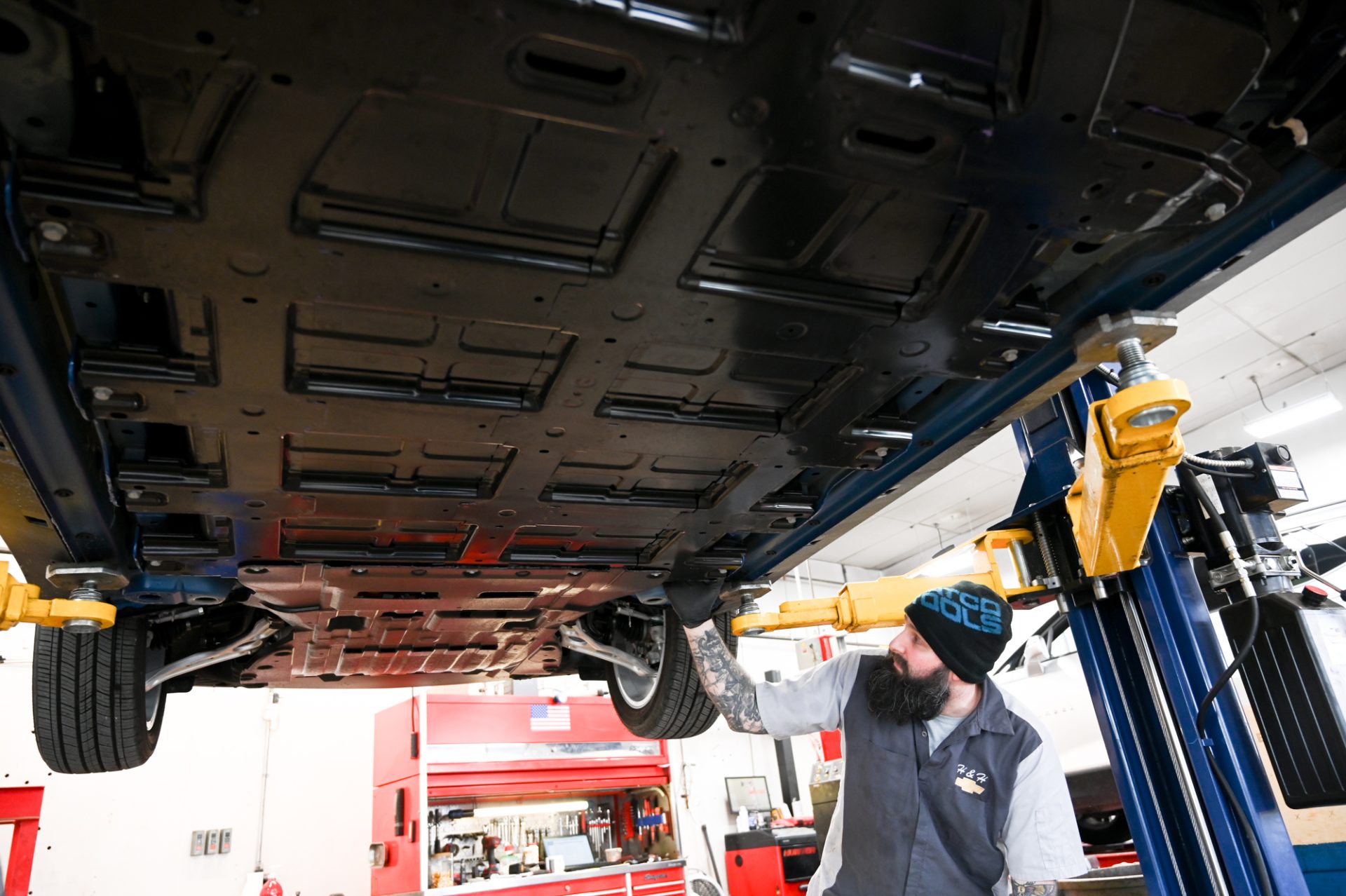 The view underneath a 2022 Chevy Bolt at H & H Chevrolet in Shippensburg.

Stephens said repairs often cost more in the early days after a vehicle comes out because technicians aren’t yet familiar with the models.

“It was two to three times longer that they were spending diagnosing problems just because it’s so new,” she said. “And a lot of times they have to call back to the manufacturers to make sure that they were properly diagnosing what was happening on the vehicle.”

We Predict’s analysis only looks at dealership service bills, so it does not include EV owners who did not need to take their car in for repairs or who took it to a local garage for maintenance.

How much service can be done by a local garage?

Some service, such as rotating tires and changing brakes, could still be done by your usual garage. But to service the entire EV, including anything connected to the high-voltage battery, service technicians will need special training.

Independent garages may need to get new certifications and tools to meet future demand for EV service.

“It will take them getting their people trained, getting the right people with the right skill sets to come in and do these types of repairs, and particularly to handle some of the materials now that are in the electric vehicles,” Stephens said.

What does it cost to charge?

Charging at public stations can range in price. Some places, like shopping malls, offer free charging while you shop.

During my week driving the Kona Electric, I drove more than 590 miles and charged four times at public chargers for a total of $24. I did not reach a full charge each time. Two half-hour charging sessions at a fast charger each cost me about $5. A nine-hour, overnight charge at a Level 2 charger cost $7. Four hours of charging in a Lancaster parking garage was technically free, but I had to pay $7 for parking.

Using gasoline and electricity prices from March 2021, the agency also found fuel for an EV cost 60% less than gas. 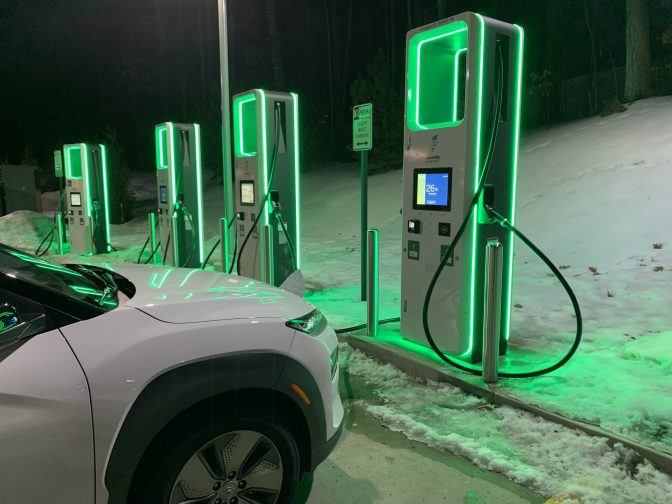 A Hyundai Kona Electric charges in State College on Feb 12, 2022.

How long does it take to charge?

How long it takes to charge depends on the type of charger you use and the size of the battery in your car.

Level 1 charging is the slowest. This is when you use an adaptor provided by the manufacturer to plug the car into a wall outlet. It adds only a few miles of range each hour. Vehicles come with an adaptor.

Level 2 charging is the most common type of public charger in the region. These chargers added about 20 miles per hour to the Kona, though it could be more depending on your vehicle.

Level 3, or fast chargers, can add miles of range each minute. For the Kona, one session at a fast charger added 100 miles in 33 minutes.

No. Some stations function just like a gas pump – you swipe a credit card and plug in. Others require you to use an app. 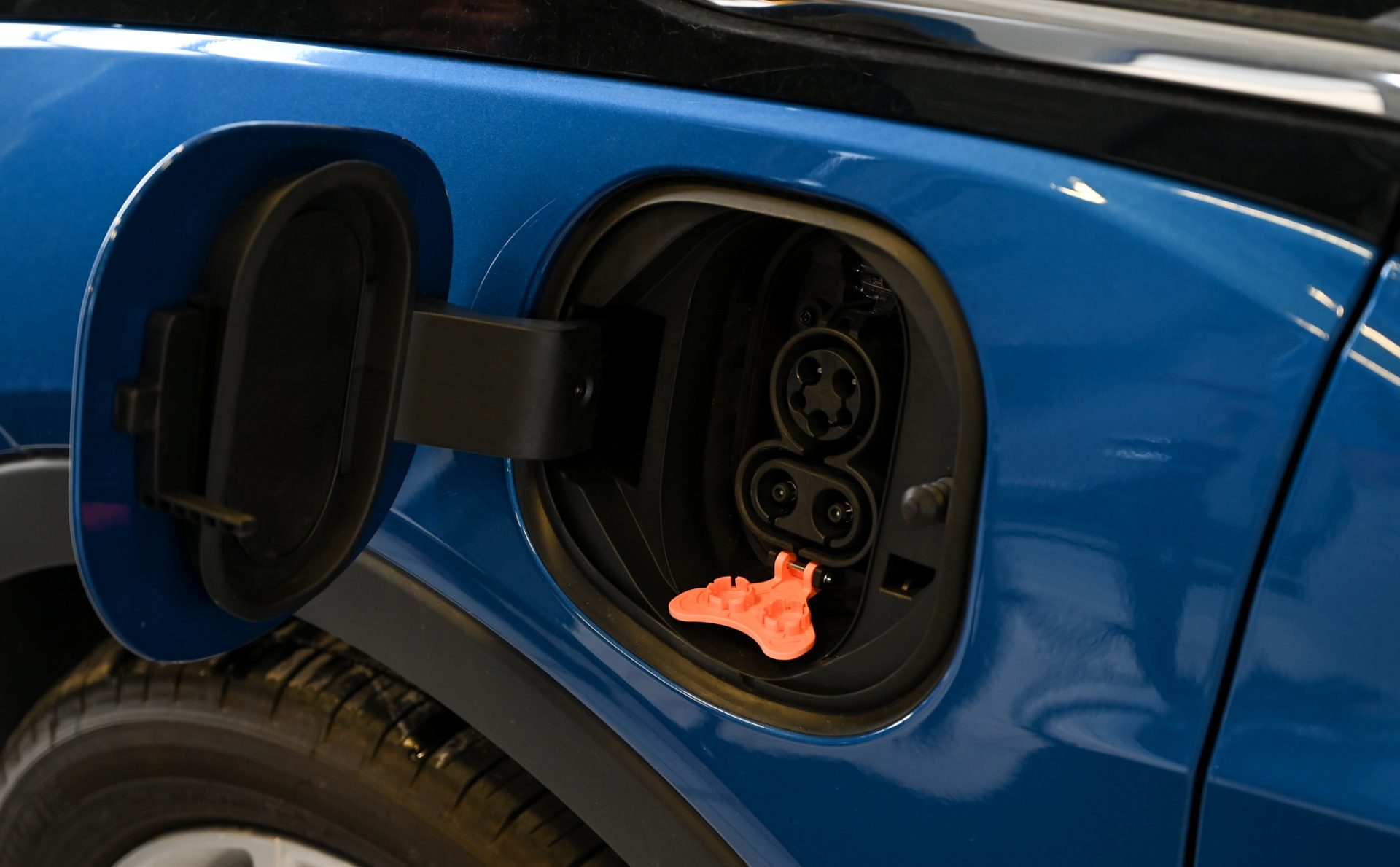 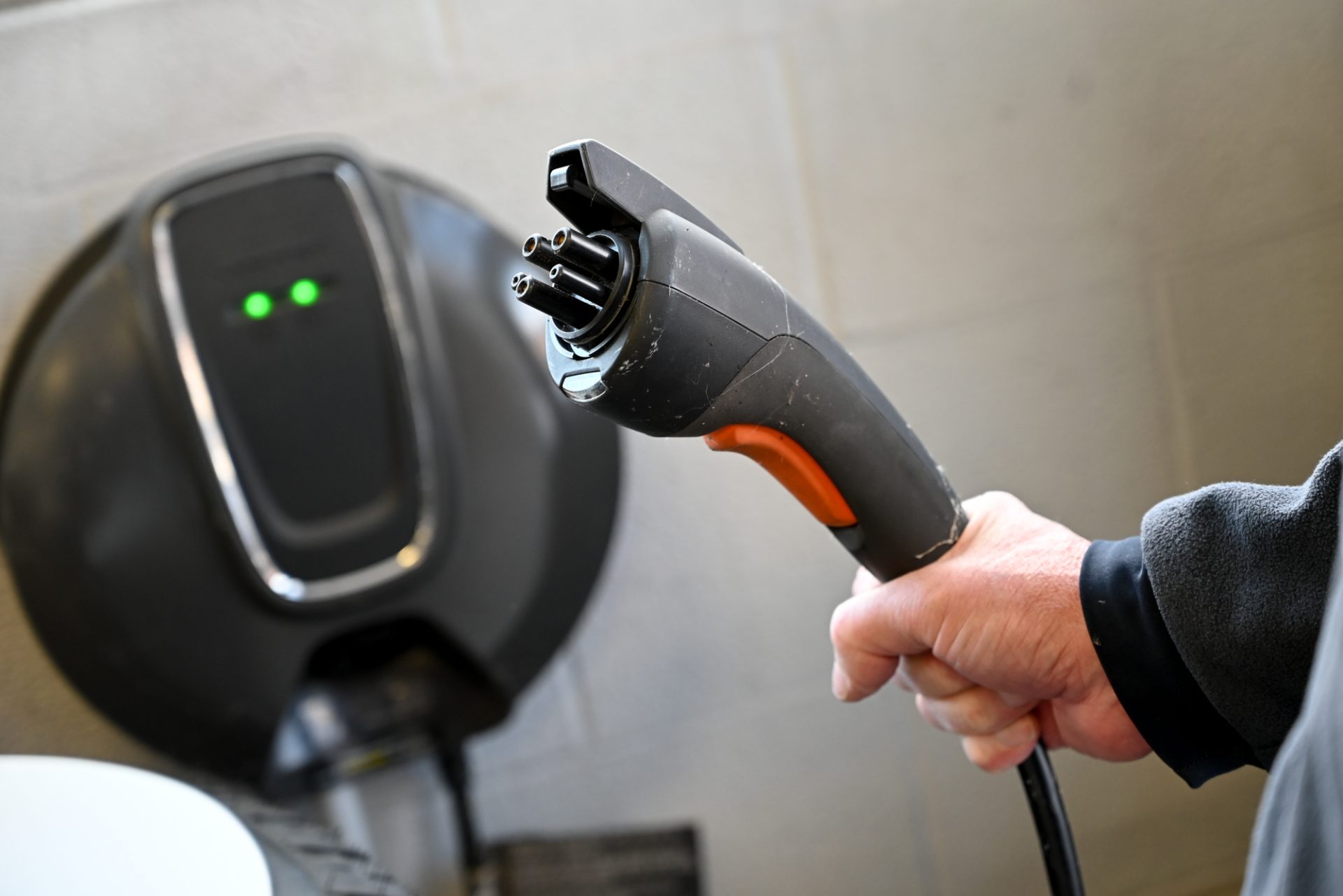 How available are fast chargers?

In central Pennsylvania, fast chargers are not very common. The ones that do exist are mainly at car dealerships.

Tesla has fast chargers in Harrisburg, Lancaster, York, and Carlisle. Tesla chargers are not compatible with other vehicles.

Pennsylvania could get $171.5 million from the federal infrastructure law over the next five years to build a network of charging stations along major highways.

The state’s Department of Environmental Protection plans to spend more than $2 million this year on transportation projects that include community charging stations.

Driving the Hyundai Kona Electric for a week was kind of stressful because of my range anxiety. But once I relaxed, it could be fun. It has a “sport mode” that makes it feel very powerful. It seemed to handle well. The acceleration was great. Overall, driving it was pretty similar to my own gas car.

How does range compare to a gas tank? Could you do a long road trip?

Range will depend on the car and somewhat on the weather. The maximum range on the Hyundai Kona Electric is 258 miles, which is among the longer ranges of current EV models. For a somewhat-indirect comparison, my Volkswagen Golf can travel about 400 miles on one tank.

You could probably take a road trip, but you’d have to factor in more travel (charging) time into the trip. And it likely depends where you want to go. A map of fast chargers from U.S. DOE shows many more locations on the east and west coasts than in the middle of the country. 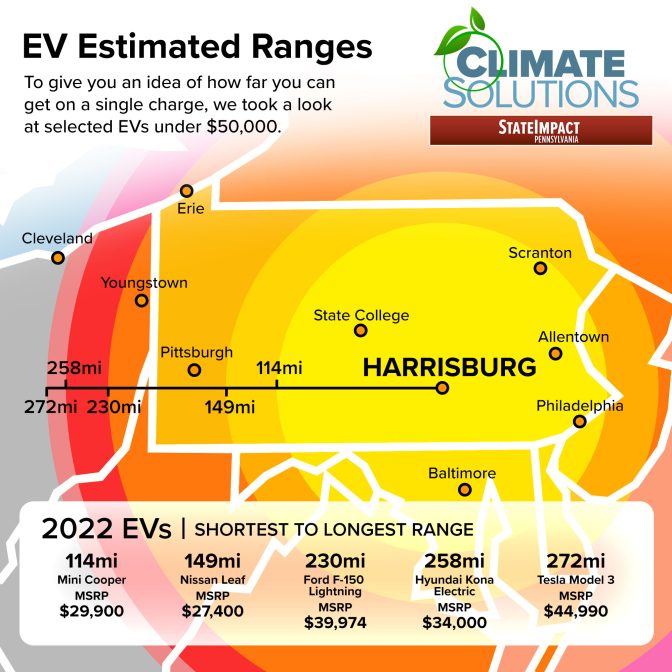 What does it cost to install a charger in your home? Do I need one?

People interested in upgrading their charging level at home would need to buy the equipment to connect to a 240-volt power supply and hire an electrician to install it.

Charging stations start at $300-400. The website Homeadvisor says the average cost to install a charging station in the U.S. is $800.

A Level 2 charger in your home might be necessary to fuel the type of driving you do or just to alleviate range anxiety.

Renters may not have the option of installing a Level 2 charger, but they could talk to their landlords about having chargers put in.

Do the emissions savings outweigh the carbon footprint from manufacturing?

Yes, according to Paulina Jaramillo, a professor in the Department of Engineering and Public Policy at Carnegie Mellon University who studies electric vehicles.

“In the worst case scenario where electricity is produced by coal, the benefits are not as significant, they could be pretty similar,” Jaramillo said, “but there’s very few places where everything is now coal electricity.”

She noted EVs are cleaner than gas vehicles in terms of other pollutants, such as nitrogen oxide and particulate matter, as well as in noise pollution.

Jaramillo acknowledged the concern around lithium-ion batteries that power EVs, as some of the materials needed to make them are mined in developing countries under questionable conditions. She said scientists are working on improvements to battery technology to make them less dependent on what are called conflict minerals.

A U.S. DOE analysis shows a 2020 small electric SUV produced half the lifecycle greenhouse gas emissions of a similar gas-powered SUV on average.

Future EVs are expected to be responsible for even fewer emissions.

“The grid is decarbonizing, so the emissions over the lifetime, it’s just going to be lower,” Jaramillo said.

Why are so many American EVs larger vehicles?

Because Americans like larger vehicles, according to We Predict’s Renee Stephens, who previously spent nearly three decades with General Motors.

She noted some early EVs were so small it prevented some people from considering them.

“I would say it is an American-ism that this kind of compact and mid-size SUV is very popular here,” Stephens said. “It’s enough room, it has enough versatility without being a big truck.” 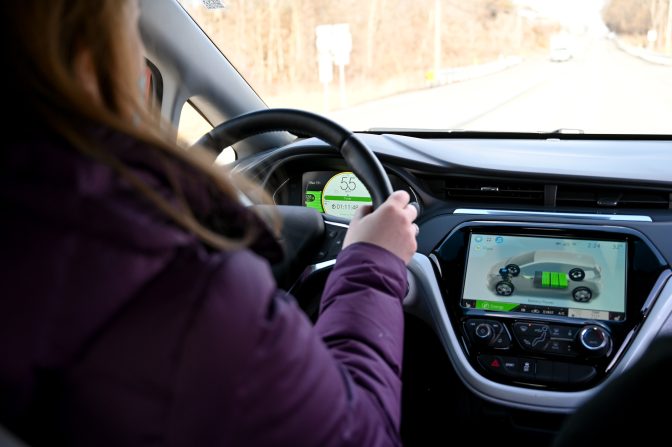 Do you have to significantly change your life to own an EV?

That probably depends on what your life is like. If you mostly drive short distances around the area where you live and you live in a house with a driveway, an EV might be a very easy transition for you. If you do a lot of driving and can only charge at public chargers, owning an EV would likely require more planning on your part and use up more time, as you wait for it to charge.

This story was produced in conjunction with America Amplified, a national project among public media organizations based on listening, community engagement and reflecting America. Reporter Rachel McDevitt’s texting club is part of our AA effort: