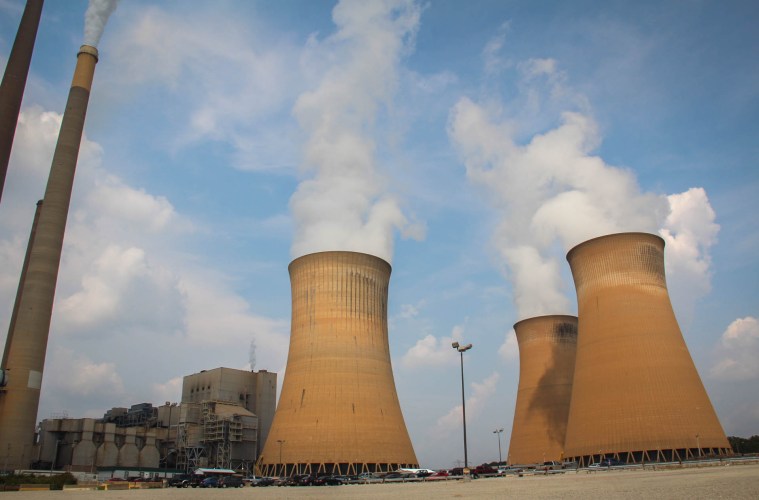 The U.S. Supreme Court is set to hear a case later this month that will look at how the EPA regulates greenhouse gases. Legal experts say the case, West Virginia v. EPA, could mean more than just curtailing EPA’s authority in addressing climate change. It could rein in other federal agencies.

“I think it is scary,” said Cara Horowitz, co-executive director of the Emmett Institute on Climate Change and the Environment at UCLA School of Law.

The case dates back two administrations

Like many people, Horowitz was surprised last fall when the Supreme Court agreed to hear the case. “Because in many ways the case is a dead letter,” she said. “It’s not totally clear what exactly the court is reviewing.” (Horowitz co-authored an amicus brief to the Court on behalf of electric grid experts.)

The case stems from rules created by the Environmental Protection Agency during the Obama administration known as the Clean Power Plan, which attempted to shift the electricity sector away from coal-powered plants, and toward cleaner energy sources, like wind and solar power.

The Clean Power Plan was challenged in court, and the Supreme Court issued a stay pending the lower court decision. The CPP never went into effect.

It was replaced by the Trump administration with the Affordable Clean Energy (ACE) rule, which didn’t regulate where power plants were getting their energy; it looked only at reducing emissions at the plant level.

“What some folks call an ‘inside the fence line’ approach,” Horowitz explained, “where EPA can look only at each individual coal-fired plant and make it take steps to be more efficient, and that’s it.”

The ACE rule was also challenged in court, and in January 2021, the D.C. Circuit Court of Appeals ruled in that case. “The D.C. Circuit said, ‘Nah, you’re not interpreting and applying the Clean Air Act correctly. Your regulation is far too weak’,” Horowitz said.

“That the agency had the obligation to adopt a regulation governing greenhouse gas emissions from power plants, and that that needed to be the sort of expansive regulation that the Obama administration had adopted,” Adler said.

That lower court decision is what will be formally reviewed by the Supreme Court on Feb. 28.

Why is SCOTUS hearing the case now?

After the ACE Rule was thrown out, West Virginia, Ohio and other states petitioned the Supreme Court to look at the issue.

While Pennsylvania joined dozens of cities and states in opposition, arguing there was no rule in place for the Court to consider.

It sided with West Virginia.

“What makes it odd is that the rule that the D.C. Circuit had been weighing in on no longer exists,” said Horowitz.

The Biden administration has said it intends to write its own rule.

Broader implications for EPA and other agencies

The Supreme Court usually finds reasons not to hear cases, which is why Horowitz and many other experts are concerned that the Court has other reasons for taking this case.

Jonathan Adler is less sure that the court will look more deeply at the authority of the EPA, but if it does, the Major Questions Doctrine could come into play.

“The idea of the Major Questions Doctrine is essentially that Congress does not delegate to agencies broad regulatory power without saying so,” he explained.

When Congress creates a sweeping law, in this case, the Clean Air Act, it delegates broad power to agencies to fill in the details, but according to the Major Questions Doctrine when agencies move in new directions, like shifting to cleaner energy, courts should not assume Congress has given agencies this authority,

“And so when you have a statute like (the Clean Air Act) that was last amended more than thirty years ago, where Congress was thinking about the sorts of control measures that were applied to traditional pollutants, it would be unusual to interpret that provision as containing the latent power to reorder the entire power sector of the economy,” Adler explained

It would take an act of Congress to give EPA that power, he said. Horowitz isn’t holding her breath for that.

“In this hyper-polarized political environment, it’s not like Congress is going to step in and say, ‘Oh, then we’re going to give EPA more authority,’” she said.

Horowitz and others fear this case could have implications for other federal agencies.

“You could take that same reasoning cut and paste it across a range of different statutes that give an agency the authority over everything from immigration decisions to health care decisions, to the environment, public safety, worker safety and use that same reasoning to restrict agency authority in all of those arenas and others,” she said.

A decision in the case is expected in June.

‘Irreversible’: No easy fix for water fouled by gas driller in Dimock, Pennsylvania