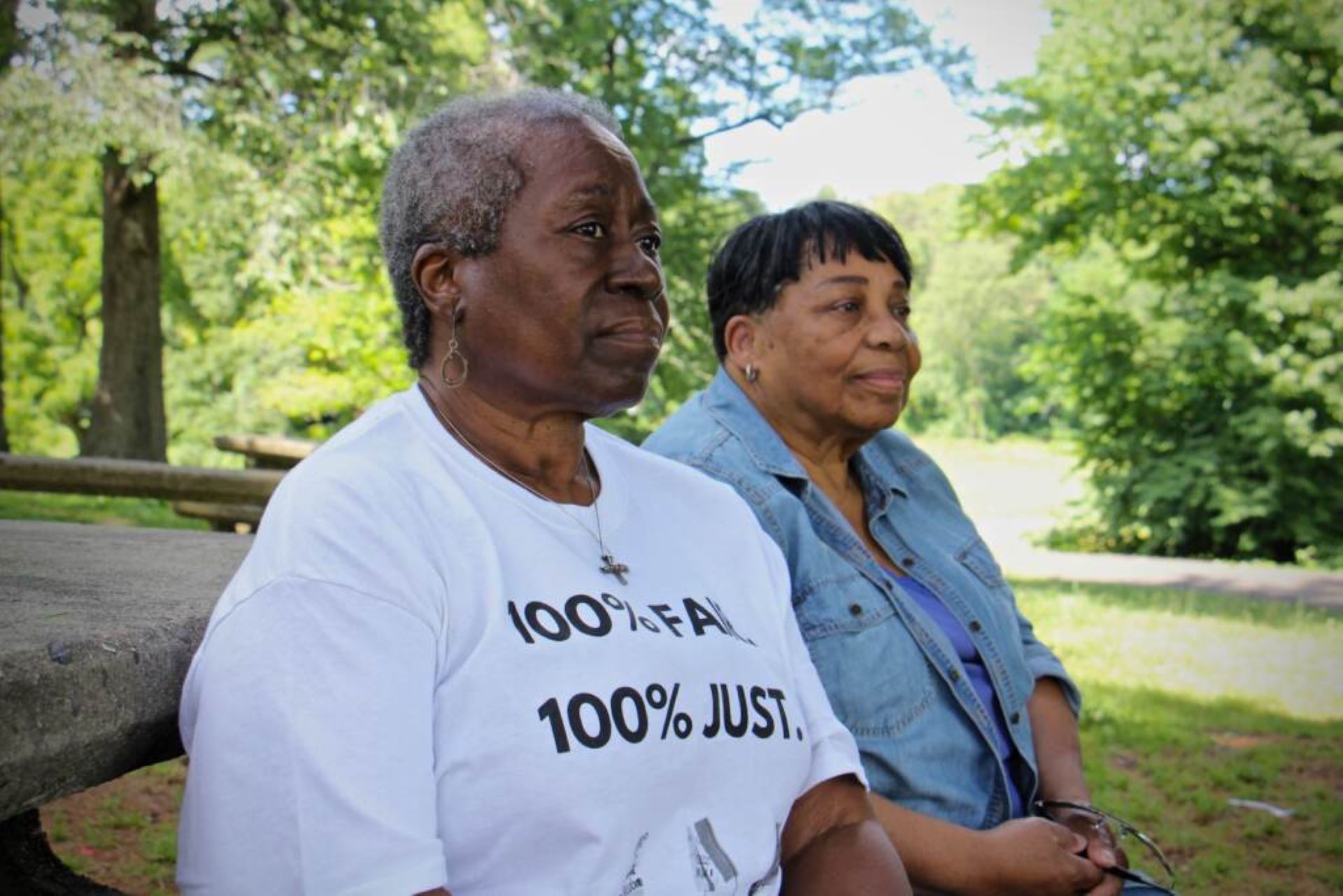 Paula Paul (left) and Frances Upshaw stand in Fernhill Park across the street from the Midvale Bus Depot, where SEPTA operates a natural gas burning power plant. Working with the POWER Interfaith movement, they filed a civil rights complaint against the city for permitting the plant.

Within a week of taking office, President Joe Biden signed an executive order committing federal agencies to address environmental justice — making sure poor neighborhoods and communities of color aren’t saddled with a disproportionate number of polluters.

He formed the White House Environmental Justice Advisory Council and the Environmental Interagency Council to fix both current and historical injustices. And he promised to step up enforcement of civil rights laws aimed at protecting those communities.

The Environmental Protection Agency has a long history of failing to adequately enforce Title VI of the 1964 Civil Rights Act, which requires federal aid recipients not to discriminate on the basis of race, color, or national origin. Since October 2019, the agency has pursued just seven out of 31 complaints.

In March, the EPA’s External Civil Rights Compliance Office began an investigation of the Philadelphia Department of Public Health’s Air Management Services permitting of SEPTA’s natural gas-powered combined heat and power plant at the Midvale bus depot in Nicetown. The plant is built and operating, providing electricity to SEPTA’s Regional Rail lines. The heat typically lost at traditional power plants is used to heat and cool the buildings at the Midvale bus depot.

Opposition to the project was twofold: Neighbors and environmentalists said that it would increase air pollution, and that it would lock in reliance on a new fossil fuel plant at a time when climate change is contributing to record-breaking heat waves, forest fires, and flooding.

Standing recently at the corner of Roberts and Wissahickon avenues, where heavy traffic rushes toward Roosevelt Boulevard, nearby resident Frances Upshaw pointed to the 40-acre Midvale depot — where more than 300 buses come each day to be cleaned and fixed.

“These people would not have put this in Chestnut Hill or any other place where there were mostly white people, because that’s just not the way it’s done,” Upshaw said. “Everything in this system, unfortunately, and I hate to say it, is all institutional racism, period.”

Her friend Paula Paul, who lives in East Germantown, said nobody should be building new fossil fuel plants.

“If we’re moving toward an environment where we’re trying to get rid of fossil fuels because we know it’s bad, why would you do that?”

Paul is retired from Philadelphia’s Law Department. Today, she and Upshaw are major players in a federal civil rights complaint filed against the city by the interfaith activist group POWER. The complaint says racism played into Philadelphia’s decision to permit SEPTA’s new power plant in a neighborhood already suffering from poor air quality.

Paul said her interest came through her economic justice work with POWER, and now she and Upshaw chair the climate justice committee.

“I did not understand the environment,” Paul said. “I knew that plastic bags were bad for the environment. Mostly what I knew is white folks were trying to save the whales. But then I understood that it impacted just the way I’m breathing today. It became personal, and it became a fight for me.”

In its complaint, POWER pointed out that more than 70% of neighborhood residents are Black and that more than one-third live below the poverty level. It faulted Philadelphia’s Air Management Services for not conducting an adequate health study and failing to force SEPTA to conduct an “analysis of alternatives.” It called the power plant “a solution in search of a problem,” accusing the transit agency of responding to political pressure from the state’s fossil fuel industry.

Despite requests, SEPTA did not provide an official to interview for this article, nor did it provide air monitor results from the site.

The POWER complaint also cites a community health assessment conducted by the city Department of Public Health that shows the neighborhood near the plant’s site suffers from some of the highest childhood asthma hospitalization and cancer death rates in Philadelphia.

The environmental justice movement began in the 1990s with a number of principles, including self-determination. EPA’s guidance promotes fair treatment of all people when it comes to the location of industrial facilities, and meaningful participation of those communities in the permitting process.

The city says that’s exactly what it did, and cites more than a dozen public meetings with residents, sit-downs with environmentalists, and publishing the plans in plain English at the local library.

“There’s no question that that permit was appropriately issued and it does not have a significant effect on health or the environment and is not having a disparate impact on a poor or minority community,” said Patrick O’Neill, divisional deputy city solicitor for environmental law.

As a comparison, the limit on major sources is 100 tons a year. He said air modeling shows resulting levels of carbon monoxide, sulfur dioxide, and nitrogen dioxide do not exceed EPA’s National Ambient Air Quality Standards. As such, O’Neill said, the city did not have to implement any environmental justice policies, which primarily increase community outreach. But Air Management Services did so as a response to public opposition.

Further, he said, the plant will cut greenhouse gas emissions by about 40%, a conclusion confirmed by EPA analysis. That’s because the alternative — getting the electricity from the grid — would tap into coal-generated power.

O’Neill said SEPTA conducted a cancer-risk analysis that showed minimum risk. Of all the air pollutants evaluated, formaldehyde had the highest risk of four in 1 million, far below the EPA’s own upper limit of 100 per million. And he said SEPTA adjusted its plans based on community input, including additional quarterly air monitoring for nitrous oxide and carbon dioxide.

Environmentalists also lost their appeal of the permit to the city’s Board of License & Inspections Review. The board did not find any of the expert testimony adequate.

“If they meet all the requirements, we are actually obliged to issue those permits,” O’Neill said.

In other words, if it did not issue the permit, the city risked being sued by SEPTA.

Still, the city has never faced racism charges from the EPA before. And it’s an embarrassment to the administration of Philadelphia Mayor Jim Kenney, which has expressed commitment to both environmental and climate justice. So instead of being subject to an investigation, the city agreed to the EPA’s Informal Resolution Agreement.

In the past, the process didn’t make significant changes because the people who filed the complaints never got to sit down at the table with those who made the decisions, said Amy Laura Cahn, who runs the environmental justice clinic at Vermont Law School. EPA says the remedies vary, but Cahn said they are often procedural, like increased outreach that simply checks a box.

“The laws were written to corporate advantage. Laws were never written to our advantage.” –Paula Paul, East Germantown

“We want to make sure that those agencies are actually hearing how their decisions are affecting communities,” Cahn said.

Vermont Law School and the law firm Earthjustice litigated a case in which communities in Alabama, Michigan, California, New Mexico, and Texas waited decades for EPA to even respond to their complaints.

“We actually received a favorable finding from the court that found EPA engaged in unreasonable delay in processing these complaints. And yet even in light of that finding, the communities who are parties to that litigation are still struggling,” she said.

But under Biden, there’s a commitment to change, she said.

“So,” Cahn said, “the question is when the rubber hits the road, what does that actually look like?”

EPA’s only real enforcement mechanism is to defund the permitting agencies — something it has never done. One way to prevent future complaints is to perform regular compliance reviews that make sure state and local permitting agencies are not discriminating on the basis of race. So far, since Biden took office, the compliance office has not initiated any of those reviews but says it plans to start one by the end of September.

Meanwhile, Paula Paul and Frances Upshaw said, increased outreach alone won’t necessarily right those historic wrongs. They want to see a permitting process that doesn’t just look at one facility, but instead takes all the existing stressors on a community into account, including other sources of pollution.

“The laws were written to corporate advantage,” Paul said. “Laws were never written to our advantage. Because we don’t have the influence or the money that they have, and that’s the way the world has been tilted. It is like an upside-down triangle. We’re holding it up because only a few reap all the benefits. We’re trying to tilt that triangle.”

Since meeting directly with EPA officials, both Paul and Upshaw are optimistic things are changing. But they also want to sit down directly with the people who permitted the plant, something the city says it is willing to do.

“At least get them thinking more about the people,” Upshaw said. “It’s OK to say, ‘This isn’t going to hurt.’ Well, you’re going to say anything that’s going to make me go away. But when my kids have asthma, that’s a whole different story.”

Paul and Upshaw said that in the future , they want to see meaningful public participation measured by outcomes. They want air monitor results publicly available. And they want offsets — like more trees in the surrounding neighborhoods and environmental education in local schools.