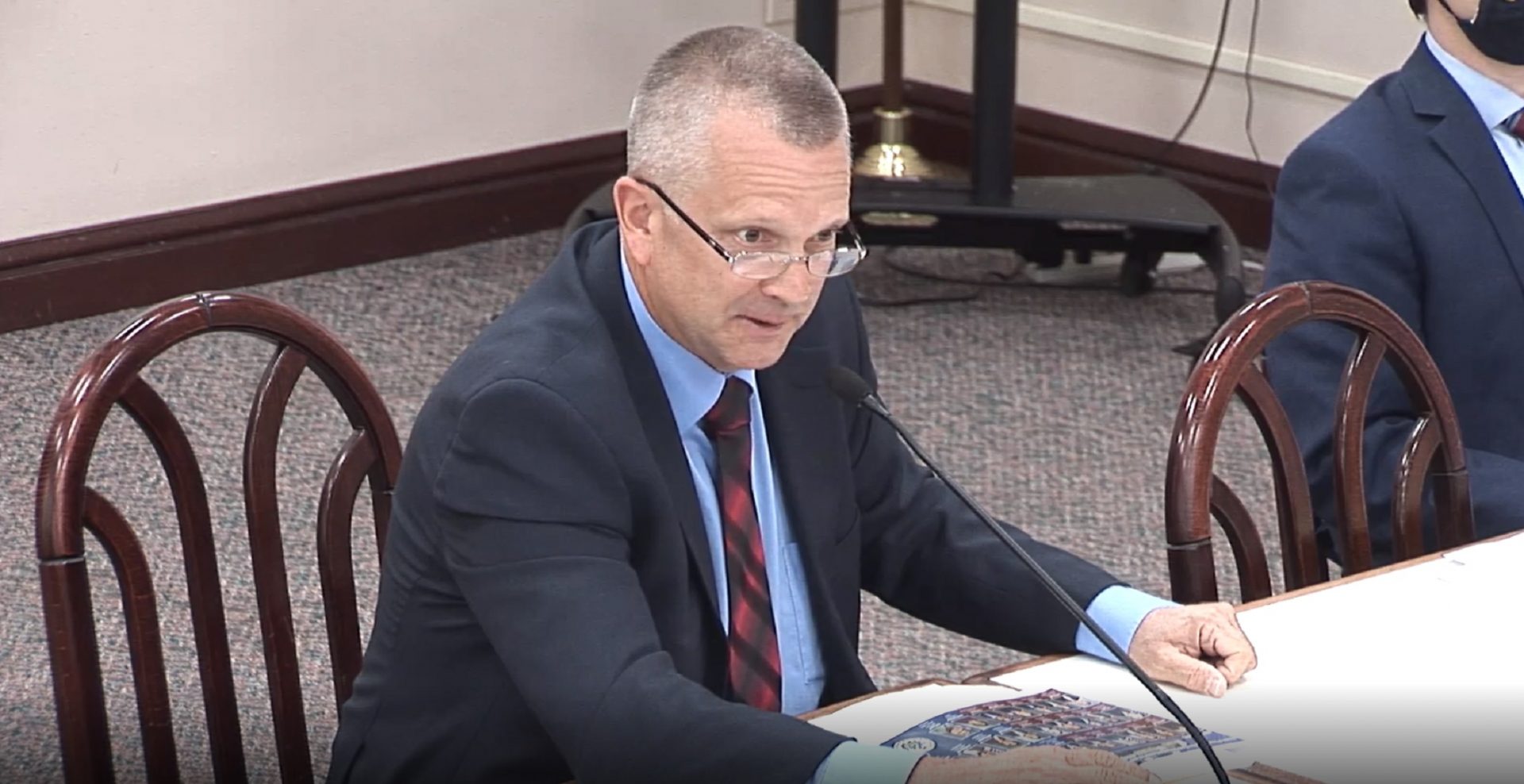 This story is part of Covering Climate Now, a global journalism collaboration strengthening coverage of the climate story.

This week, for Earth Day, President Joe Biden is holding a virtual summit with world leaders to discuss the climate crisis.

It’s a familiar theme for Representative Daryl Metcalfe (R-Butler), who is chairing the House Environmental Resources and Energy Committee for the second straight term.

In his tenure, he has invited climate change deniers to testify at hearings, criticized the governor’s attempts to address climate change as overreach and unconstitutional, and tried to loosen a number of environmental regulations.

Metcalfe did not respond to requests for comment for this story.

But he’s more than willing to voice his opinion during committee meetings. Last term, he equated climate change with seasonal weather, said predictions about the dangers of climate change are fiction, and implied carbon dioxide can’t be a pollutant because plants use it as food.

Listen to this story:

The fact that Metcalfe dismisses climate science — and lawmakers who disagree with him — takes on special significance because he’s the head of the Environmental Resources and Energy Committee, where he’s in a prime spot to block legislation that could address climate change. 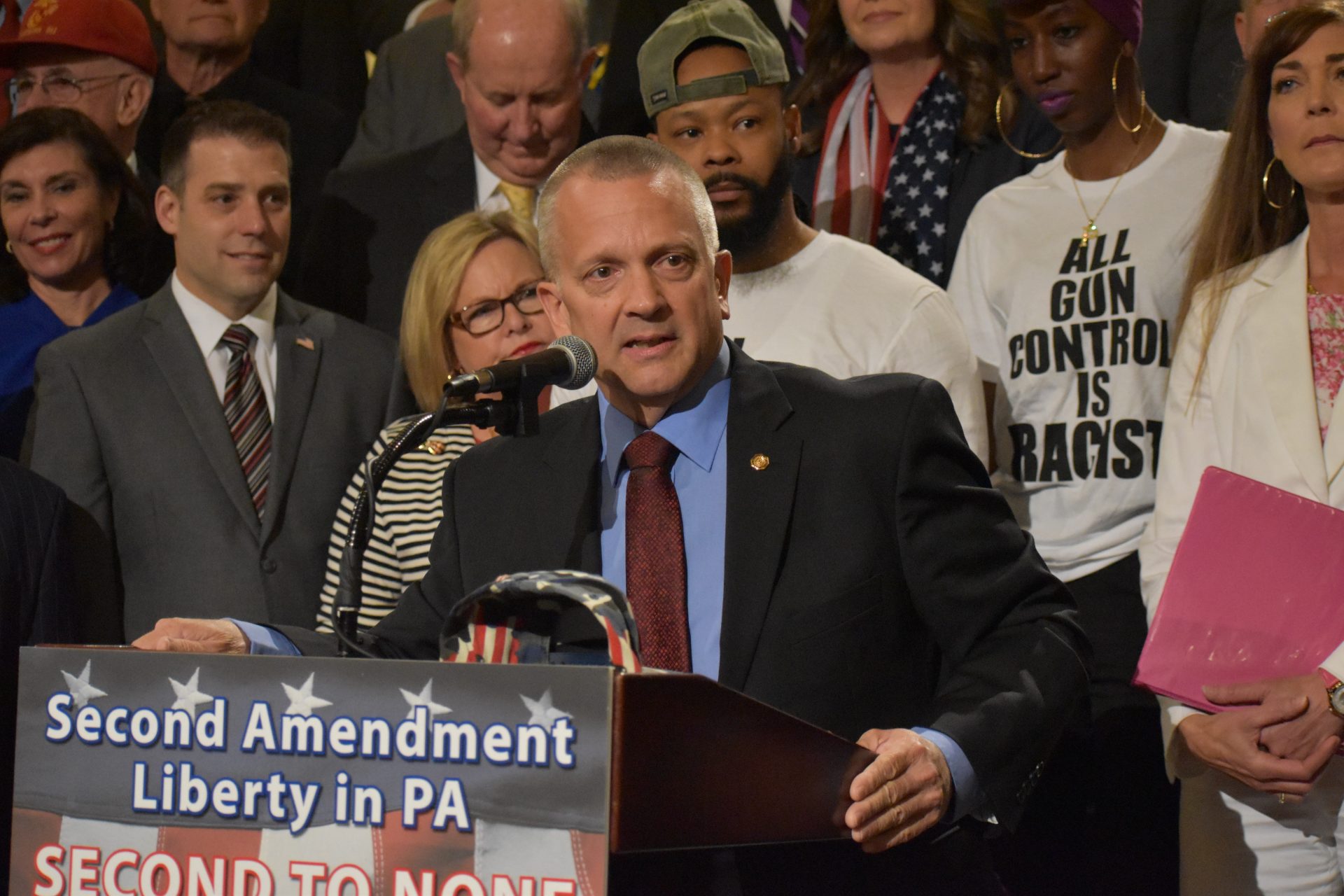 State Rep. Daryl Metcalfe, R-Butler, speaks in the state Capitol during a Second Amendment rally on May 6, 2019.

University of Pennsylvania climate scientist Irina Marinov was shocked by the skepticism she faced when she appeared before the committee in 2019.

She said she went to speak about the scientific consensus on climate change: humans are warming the planet by burning fossil fuels and emissions need to be cut dramatically in the next decades to avoid the worst consequences of that warming.

But she wasn’t expecting to present alongside a slate of climate deniers.

She noted Pennsylvania has a responsibility to reduce emissions; its emissions are the fifth-largest in the United States and larger than some small countries.

“I would like to see a move away from politics and moving into the practicality of how do we get this thing done,” Marinov said. “It’s so backwards to debate the existence of climate change.”

“Even though we have radical differences on policy, I do think he is sincere in these extreme right wing views he holds,” Vitali said.

He said it’s better to show up prepared and ask questions that make it clear where the science stands.

Where he’s coming from

Ron Miller, a former Republican state representative from York County, said the problem with discussing climate solutions is that it’s emotional; people treat it as an issue with no common ground.

Miller chaired the committee in the 2013-14 session, when he said things were less divisive in Harrisburg. He said, as chairman, it was important for him to understand where his members were coming from.

“You need to know what the possible is for them and understand why they may not be able to support an issue or might strongly support that issue,” Miller said.

Metcalfe represents a portion of southern Butler County that covers some quickly-growing Pittsburgh suburbs as well as more rural areas.

The county is a leader in manufacturing and has benefitted from the rise in natural gas drilling.

Democratic Commissioner Kevin Boozel said they created an infrastructure bank with impact fees from drilling and have now financed $40 million worth of projects that would not have been done otherwise.

Republican Commission Chair Leslie Osche said she believes constituents would be concerned about any move at the state level that would stifle the gas industry’s growth. 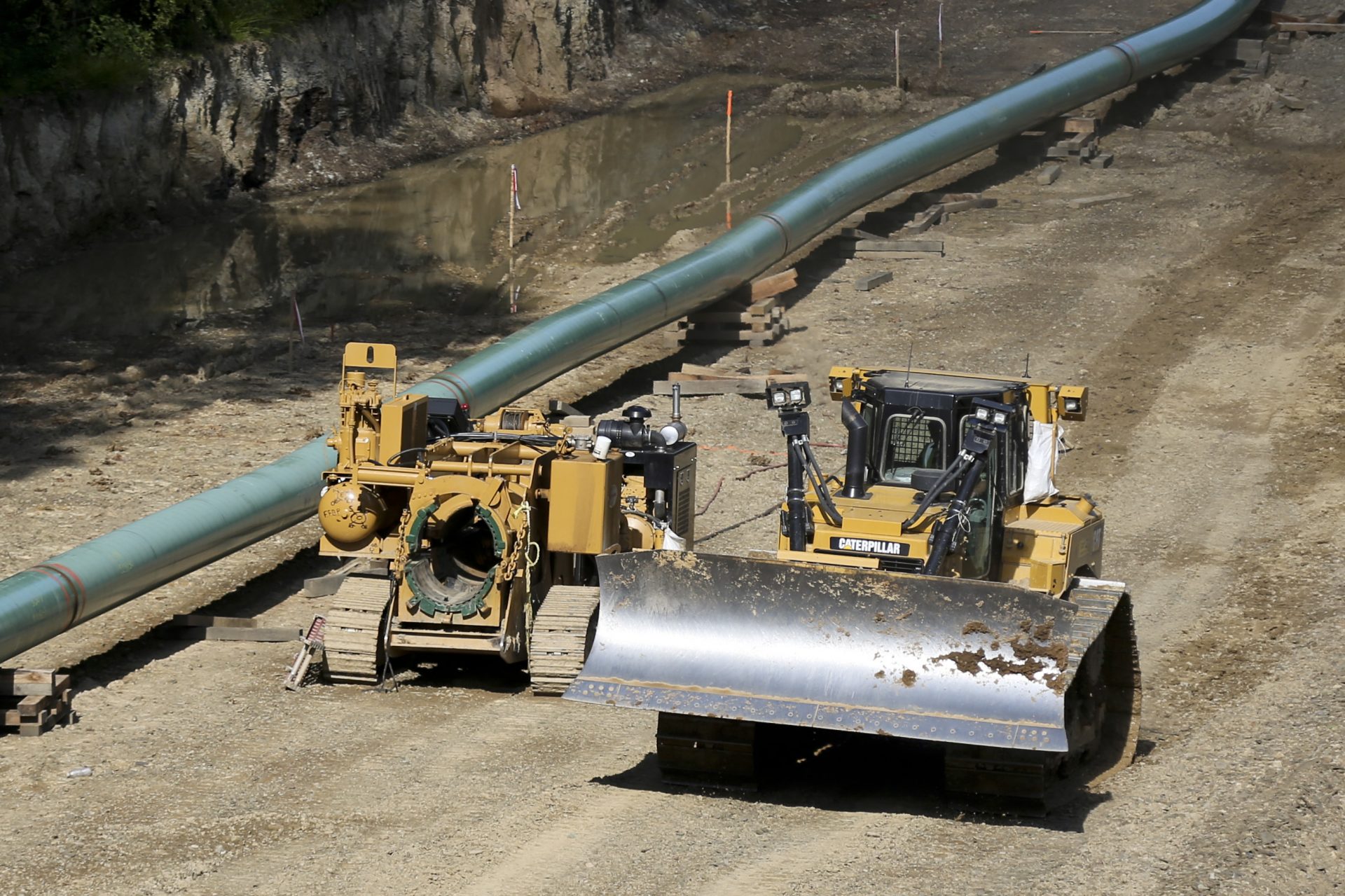 An operator moves a bulldozer along a section of assembled pipe lined up along a cleared section of woods where a pipeline for shale gas is under construction on Saturday, July 8, 2017, in Jackson Township, Butler County.

“I think that there has to be a balance of what humans and the economy calls for against what the realities are of climate change,” Osche said.

She said she thinks Metcalfe will find that balance “guided by those who are around him.”

“We don’t need barriers to stop that growth and development but we do need protection,” he said, “and I see it as: If we rush through it, we may miss something that we could have prevented.”

Boozel noted environmental issues don’t usually come up when he works with Metcalfe on county issues.

“Constituents, it’s a different story. I know that many have tried to talk with Representative Metcalfe and have been frustrated with the conversations,” Boozel said.

But even if some constituents are unhappy, Republican leaders in Harrisburg seem to be just fine with Metcalfe’s performance.

David Hess, who worked with Republicans on the Senate environmental committee before becoming Department of Environmental Protection Secretary in 2001, said Metcalfe’s second appointment is more telling than the first.

“The fact that Representative Metcalfe was selected again as environmental chair really confirms the fact that the Republican caucus likes what he’s doing, by and large,” Hess said.

Committee chair assignments are based primarily on seniority. Metcalfe first took office in 1999, so is basically guaranteed a leadership role.

In a statement, a spokesman for House Speaker Bryan Cutler (R-Lancaster) downplayed the role the leader has in influencing legislation.

“Speaker Cutler has been very consistent in not playing a role in how committee chairs and members operate,” spokesman Mike Straub said.

As Speaker, Cutler is responsible for assigning committee chairs and referring each piece of legislation to an appropriate committee. 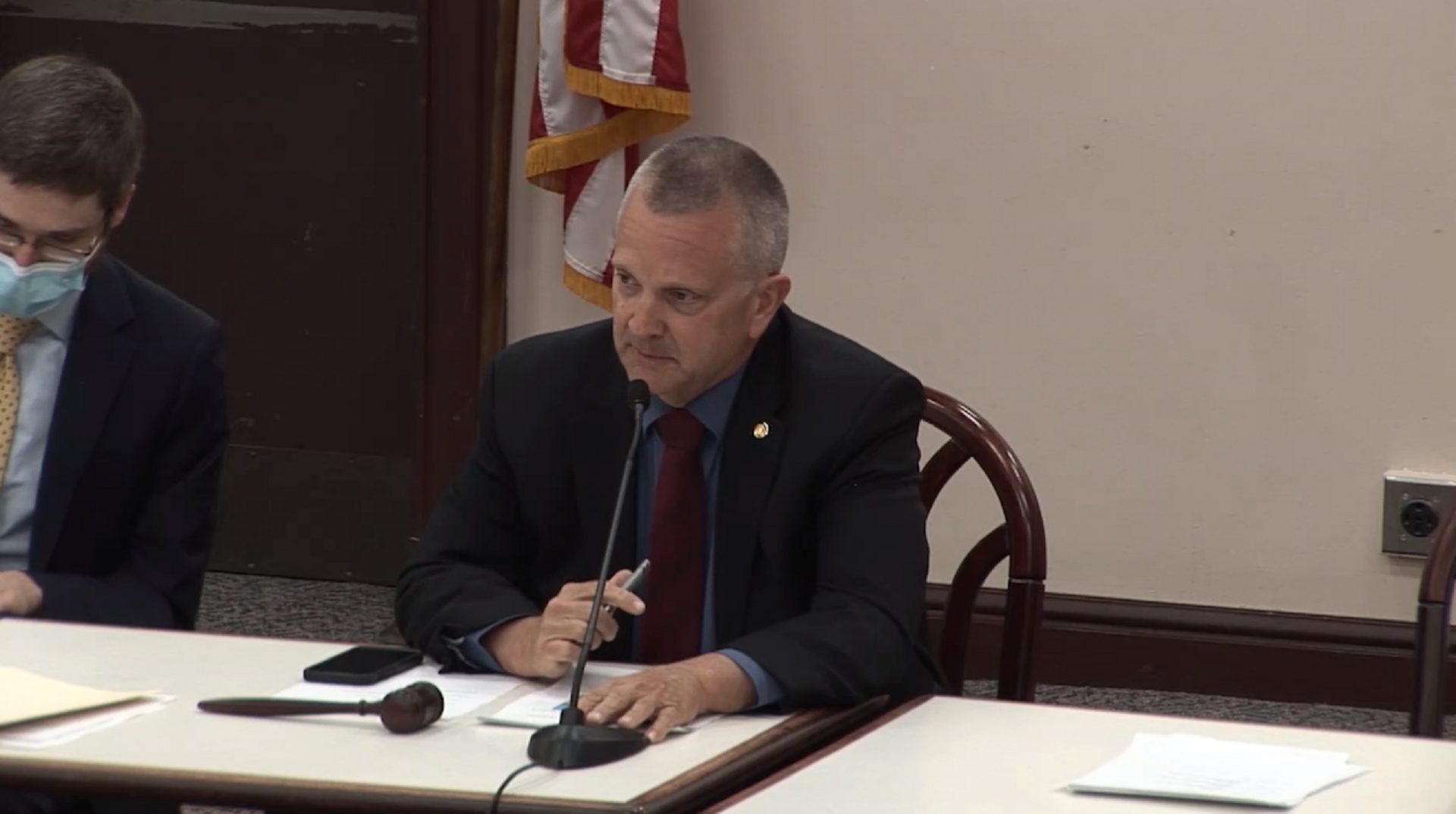 In this screen capture taken from the Pennsylvania House Republican Caucus, Rep. Daryl Metcalfe (R-Butler) speaks during a meeting of the House Environmental Resources and Energy Committee on April 19, 2021.

In his previous position as State Government Committee Chair, Metcalfe said he blocks “all substantive Democrat legislation” and advances “good Republican legislation.” The statement on Facebook in April 2018 caused Democrats to call on then-Speaker Mike Turzai (R-Allegheny) not to refer any more Democratic-sponsored bills to Metcalfe’s committee. The letter listed more than 70 bills sent to the committee that were not called up for a vote.

The following session, Metcalfe switched to the Environmental Resources and Energy Committee. The committee voted on 27 pieces of legislation over the 2019-20 term, all sponsored by Republicans. All passed, most along near-party line votes. Sixty-six bills died in committee; 34 from Republicans and 32 from Democrats.

“It’s safe to say there’s a lot of frustration and feelings of futility in having an outspoken climate change denier as the chair of the Environmental Resources and Energy Committee in the House, especially given the immediacy of the climate crisis that we face,” said Ezra Thrush, who directs government affairs at PennFuture.

“I think the floor voting record really is overwhelming evidence about how little the majority cares about environmental policy,” he said.

Still, there are other openings for climate legislation.

Metcalfe is starting this session with a series of informational hearings that hint at an understanding of the threat of climate change. The committee has learned about carbon capture and hydrogen — not in the context of climate change, but as job-creators. Natural gas representatives touted how the fuel has helped cut emissions by replacing coal.

“Do I expect anything different from Chairman Metcalfe? Not really, but it’s certainly possible,” Vitali said.

On Monday, Metcalfe held a hearing about the environmental benefits of the state’s conventional oil and gas industry.

When Vitali commented that the world is moving to renewable energy, Metcalfe pushed back.

“I think the future will tell us where we’re heading, ultimately, and history has a part in helping you to understand the reality of the direction that we’ll ultimately end up in,” he said.

The idea of powering the world with solar and wind, Metcalfe said, is science fiction.

But even if more frequent heat waves, intense storms and catastrophic floods sound like a disaster movie, it’s what the overwhelming majority of scientists say we can expect if we keep burning fossil fuels like we do today.

Correction: This story has been updated to correct the spelling of Commissioner Leslie Osche’s name.

Pittsburgh’s air improving, but still gets an ‘F’ from American Lung Association