A man casts his line as he fishes for catfish in the Delaware River in view of the Benjamin Franklin Bridge. 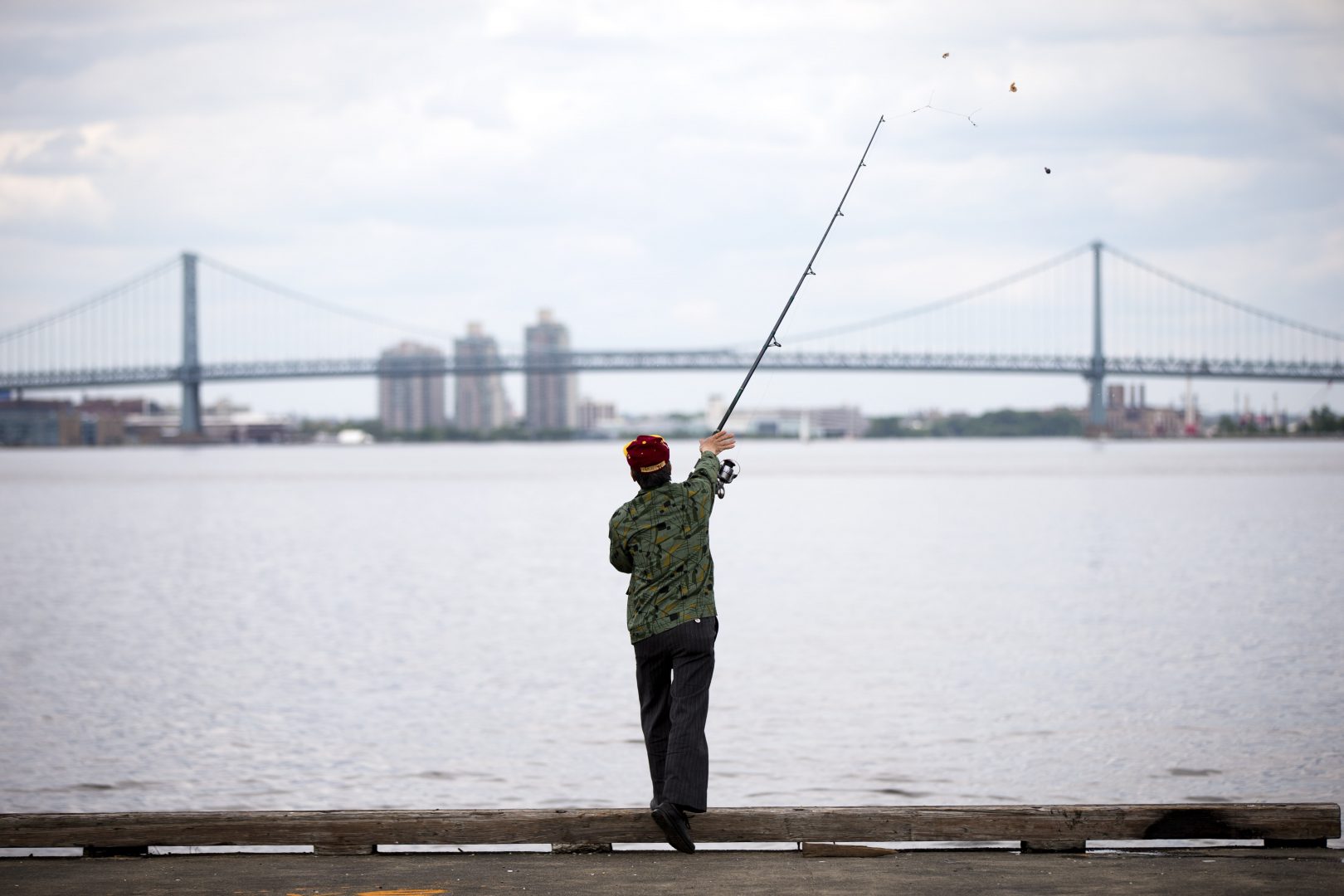 A man casts his line as he fishes for catfish in the Delaware River in view of the Benjamin Franklin Bridge.

More than 10 years after the Delaware River Basin Commission imposed a de facto moratorium on gas drilling in the watershed, setting off a battle between natural gas advocates and environmentalists, the commissioners voted to ban fracking at a special meeting Thursday.

“As DRBC chair, I welcome this opportunity to provide the fullest protection to the more than 13 million people who rely upon the Delaware River Basin’s waters for their drinking water,” Delaware Gov. John Carney said in a statement delivered by his representative, Shawn Garvin, at the virtual meeting. Garvin is secretary of that state’s Department of Natural Resources and Environmental Control.

“Fracking poses significant risks to the water resources of the Delaware River Basin, and prohibiting high-volume hydraulic fracturing in the basin is vital to preserving our region’s recreational and natural resources and ecology.”

“The whole natural gas development issue landed on DRBC’s plate in 2008,” said Collier, who ran the agency at the time. “It was a mad rush to (get) the regulations together in 2010. I am very pleased that now there is an official vote and the resolution passed.”

Collier said lessons learned from observing the impact of fracking on other parts of Pennsylvania where gas drilling is permitted, as well as current scientific studies, show this is a “very good decision.”

In explaining the decision, the DRBC’s Tambini cited a 2015 health study and an environmental impact statement done by New York state, as well as a 2016 EPA report, along with current research.

“DRBC received tens of thousands of comments, letters, and petitions from a diverse cross-section of the public from within the basin and beyond,” he said. Those comments, along with studies, reports and “conclusions of other government agencies on the impacts of HVHF [high-volume hydraulic fracturing] on water resources were reviewed and evaluated by the DRBC staff and the commissioners.”

Fracking for natural gas — technically referred to as high-volume hydraulic fracturing for its use of high-pressure water and chemicals to release gas from a tight shale formation — has led to water pollution across Pennsylvania. The most famous incident occurred early on in the gas boom in Dimock, where state regulators found that faulty well construction led to contamination of drinking water wells. 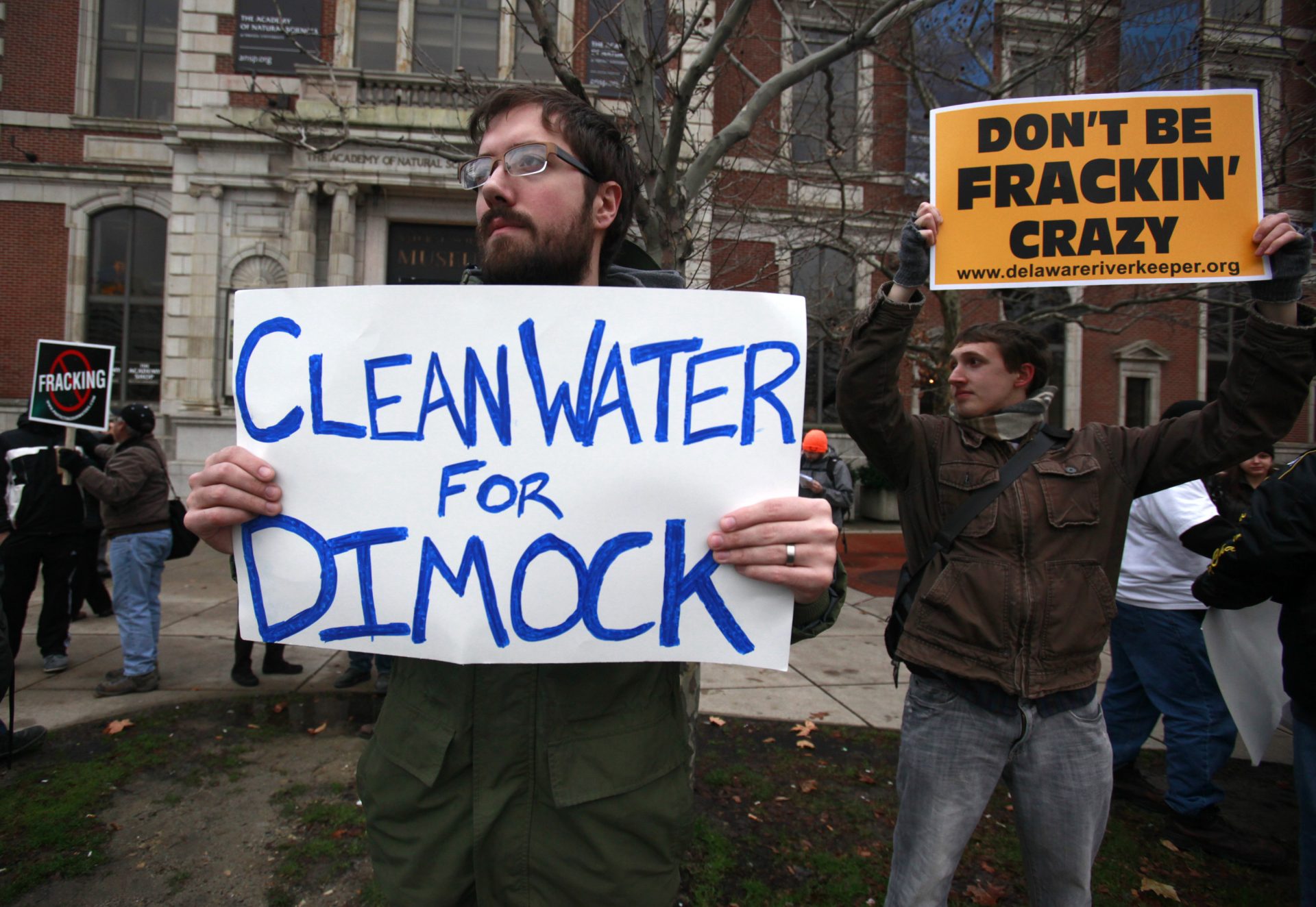 The Pennsylvania Department of Environmental Protection has concluded that shale gas drilling has contaminated hundreds of drinking water wells. Wastewater spills, which can contain heavy metals, radioactive material and toxic hydrocarbons like benzene and toluene, have contaminated surface water. Wastewater impoundments have also leaked, leading to groundwater pollution. Hundreds of lawsuits against the industry, citing illness among children and animals, have been settled out of court.

DRBC’s Tambini said the evidence shows those same incidents could occur in the Delaware River watershed, which include the river’s headwaters and where shale gas formations lie beneath rural areas dependent on private drinking water wells.

“The geology of the region … is characterized by extensive geologic faults and fractures, providing preferential pathways for migration of fluids, including gases,” he said. “If commercially recoverable gas is present in the Delaware River basin and if high-volume hydraulic fracturing were to proceed in the basin, then spills and releases of hydraulic fracturing chemicals, fluids and wastewater would adversely impact surface water and groundwater. The fluids released or migrating would contain pollutants including salts, metals, radioactive materials, organic compounds, endocrine-disrupting and toxic chemicals, and chemicals for which toxicity has not been determined.”

The commissioners also voted unanimously to create rules surrounding the import and export of fracking wastewater from the basin, and the use of fresh water by drilling companies to frack wells outside the basin.

The special meeting came at a time when environmentalists were pushing for a vote to take advantage of the new Democratic administration in Washington.

The multistate commission regulates water quality and permits industrial activity that has impacts on the river and its many tributaries. The agency is made up of the governors of New York, New Jersey, Pennsylvania and Delaware, and the commander of the U.S. Army Corps of Engineers’ North Atlantic Division, who represents the federal government.

Murphy, Carney and Pennsylvania Gov. Tom Wolf were already on the record supporting the ban. Brigadier Gen. Tom Tickner of the Army Corps of Engineers said the new administration did not have time to review the proposal, but he added it respects the decisions of the states.

“The politics of the moment weren’t going to get better,” said Delaware Riverkeeper Network director Maya Van Rossum, a vocal opponent of fracking.

Staff at the commission expressed concern at the beginning of Pennsylvania’s shale gas boom, pointing to the large volume of water withdrawals needed to frack the tight shale gas formation and the potential impact on water quality. In December 2010, the DRBC released its original proposals, establishing the agency’s regulatory authority on the issue. What followed were often-tense public hearings and an unprecedented response from both sides.

After reviewing more than 60,000 public comments, the DRBC posted its revised draft regulations online in early November 2011. But just days before a meeting to vote on those rules, then-Delaware Gov. Jack Markell announced his intent to reject them, and a divided commission canceled the meeting.

New York banned fracking completely within its borders at the end of 2014, citing health concerns.

While the stalemate among commissioners dragged on, a group of landowners eager for drilling in Wayne County, Pennsylvania, sued the DRBC in federal court in May 2016, arguing that the agency did not have the authority to regulate gas drilling.

More than a year later, in November 2017, the agency released proposed rules that would go even further and ban fracking in all shale formations in the Delaware River Basin.

While Thursday’s vote was cheered by environmentalists, it was panned by the gas industry and business interests who rejected the science and called the move political.

“The votes by New York, New Jersey and Delaware provide further evidence that these states do not have Pennsylvania’s best interests in mind,” said Pennsylvania Chamber of Business and Industry president and CEO Gene Barr. “Despite being in close proximity to Pennsylvania’s prolific wells, these states have obstructed infrastructure development that would have delivered Pennsylvania’s energy to the states and to customers in New England, where shamefully they have had to rely on foreign natural gas, including a tanker from Russia.”

“The federal government’s decision to abstain from this vote is extremely disappointing, given the national energy security implications of reduced domestic energy development and President Biden’s stated commitment to reducing emissions and re-shoring manufacturing.”

The controversy has led Republican lawmakers in Pennsylvania to challenge the role of the DRBC. In January of this year, Republican State Sens. Gene Yaw and Lisa Baker filed a federal lawsuit claiming the Delaware River Basin Commission does not have the authority to regulate gas drilling, which it says lies with the legislature.

Despite the controversy, there is little evidence the gas industry is eager to drill in the area. In 2013, Hess Corp. and Newfield Appalachia terminated leases, citing low natural gas prices. Some speculate that section of the formation does not contain enough gas to be profitable, especially at today’s low prices.

Corrections: The original version of this story incorrectly listed the makeup of the Delaware River Basin Commission. It also misspelled the last name and included the incorrect title for Shawn LaTourette, acting commissioner for the New Jersey Department of Environmental Protection, and included the incorrect name for Delaware’s Department of Natural Resources and Environmental Control.

At DEP budget hearing, some legislators focus on Pa.'s effort to join RGGI