A stretch of Polen Run, a Greene County stream undermined by Consol Energy, that the company repaired after subsidence.

Report faults DEP for mine subsidence oversight in western Pa. 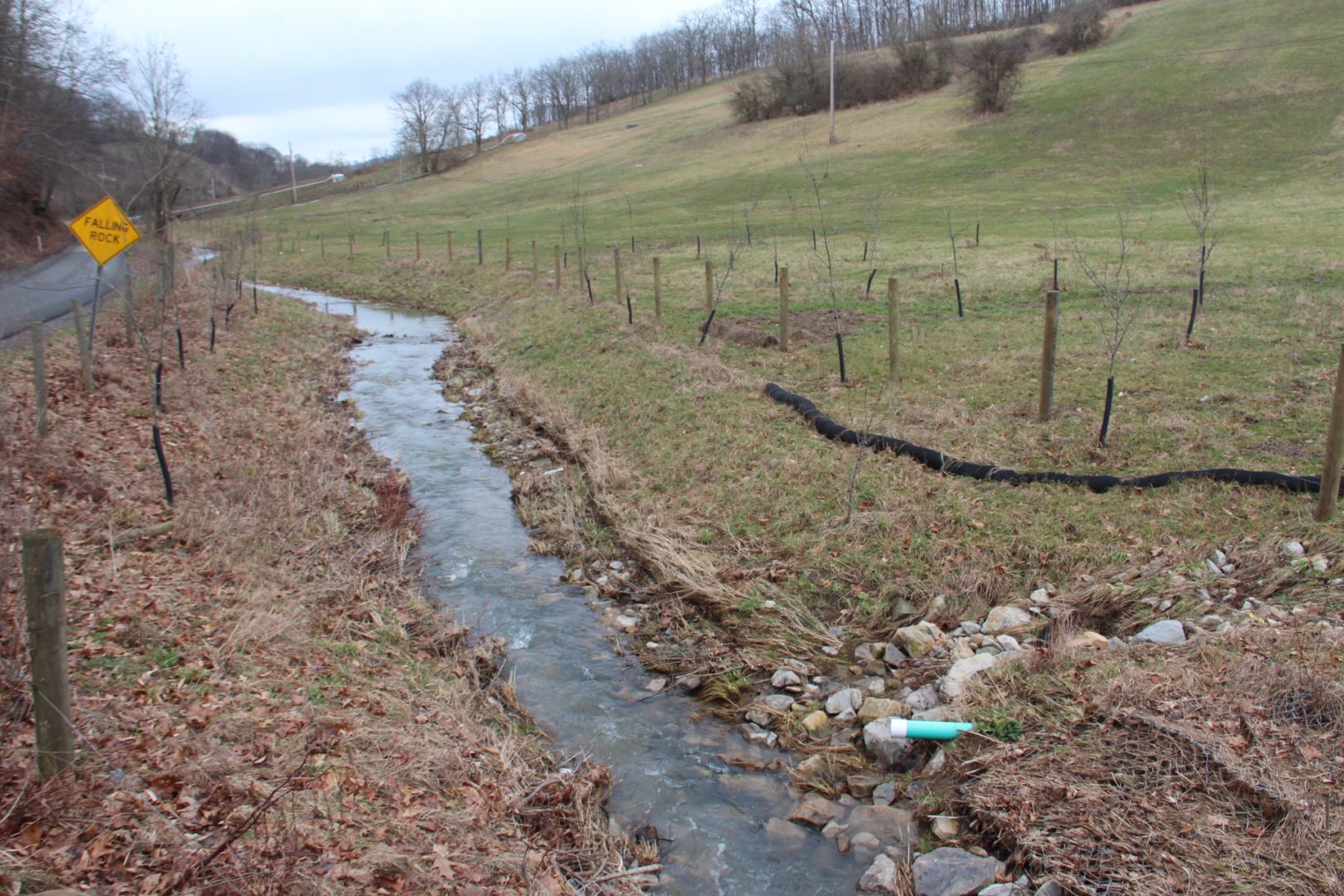 A stretch of Polen Run, a Greene County stream undermined by Consol Energy, that the company repaired after subsidence.

The Pennsylvania Department of Environmental Protection is failing to protect streams and property from subsidence from underground “longwall” mining, according to a report released by a Washington County-based environmental group.

The state is allowing dozens of miles of streams in Western Pennsylvania to suffer the loss of flow or have their streambeds disrupted from mine subsidence, because the mines are causing land above them to sink, in spite of state laws designed to protect streams, the report states.

The state’s “failure to protect” the streams above the mines “erodes the public’s trust” in the DEP, according to the report, written by the Citizens Coal Council.

The report is based on the DEP’s own study of mine subsidence, which the state is mandated to produce every five years.

Lauren Fraley, a spokeswoman for the Pennsylvania Department of Environmental Protection, said the agency was reviewing the report and that DEP Secretary Patrick McDonnell would be meeting with representatives of the Citizens Coal Council in February.

In its most recent report, DEP found that 247 structures and 25 miles of streams were damaged by mining-induced subsidence, primarily by longwall mining, which is practiced in only Washington and Greene counties in Pennsylvania. Longwall mining uses large cutting machines to extract large blocks of coal without leaving “pillars” behind to stabilize the earth above the mine. Coal mines began using the technique in the 1970s.

Aimee Erickson, executive director of the Citizens Coal Council, said the state should not allow companies to undermine and damage Western Pennsylvania’s streams. She says these streams should be protected under the state’s Clean Streams Law and the state’s Environmental Rights Amendment, which ensures Pennsylvanians the right to “clean air” and “pure water.”

The question of whether coal mines are “allowed” to damage streams is a murky one. In 2017, state environmental hearing board judge Steven Beckman wrote that state law allows longwall mining to “have some impact on a stream” but that it couldn’t “completely and permanently eliminate a stream. Between those two end points, there is a wide range of potential and actual impacts that may occur, both in terms of scope and duration.”

Under state mining laws, coal mines are allowed to damage buildings and “water supplies” like springs as long as they restore them.

“Much like residential development, industrial development, transportation projects, etc., we ensure that if there is an impact it can be repaired or restored,” said Rachel Gleason, executive director of the Pennsylvania Coal Alliance.

Damage from subsidence can take the form of “pooling,” when part of a stream sinks and deepens; it can also result in loss of flow, when water escapes through cracks or “heaves” in streambeds opened up by subsidence.

Typically, coal companies address these damages by trying to rebuild streambeds, either by cutting through high points to eliminate pools, or cementing cracks in the bedrock in the case of flow loss. In some cases, they will rebuild streambeds with artificial liners to prevent water from leaking out.

But that repair can often take years, said Stephen Kunz, an ecological consultant who prepared the Citizens Coal Council report.

“Streams are not just conduits for water. You can’t fix a complicated natural system like a stream as easily as you can fix cracks in a foundation of a house,” Kunz said. “Even after they’ve damaged these streams and they do what they have to do to try to fix them, they’re never the same stream that they were before mining.”

Over half of streams the coal industry undermined through longwall mining between 2013 and 2018 suffered some type of damage, according to DEP’s report. The industry mined under 46.75 miles of streams by longwall, resulting in flow loss along 24.44 miles of those streams and pooling along another 2.83 miles.

According to the Citizens Coal Council report, “repair” only occurred in 5 percent of impacts to structures and water supplies; the vast majority of the damages resulted in some type of “agreement” or buyout of damaged property.

Erickson, of the coal council, said that in recent years, longwall mining operations have grown, making their impacts more severe.

“When longwall mining first started out, the panels were about 400 to 500 feet wide. Now they’re fifteen hundred feet wide. And the bigger they get, the more damage they cause to the surface,” Erickson said.

Gleason, of the coal industry group, said the vast majority of damages caused by subsidence are resolved between companies and private property owners, “or, the parties collectively decide to monitor as mining progresses and choose to delay. In most scenarios, those agreements are private between the parties involved, and the path to resolution is the decision of the landowner.”

Gleason said longwall mining is the “economic backbone” of Washington and Greene counties. According to the federal Bureau of Labor data, there were 1800 coal miners in Greene County in 2019, accounting for about 14 percent of the county’s workforce. Data on Washington County coal mining was not available.