An Ohio couple eyed retirement and their racehorses. Then a natural gas power plant moved in, and it all changed | StateImpact Pennsylvania Skip Navigation

A view from the Young’s window onto the site, which used to be a farm field.

An Ohio couple eyed retirement and their racehorses. Then a natural gas power plant moved in, and it all changed 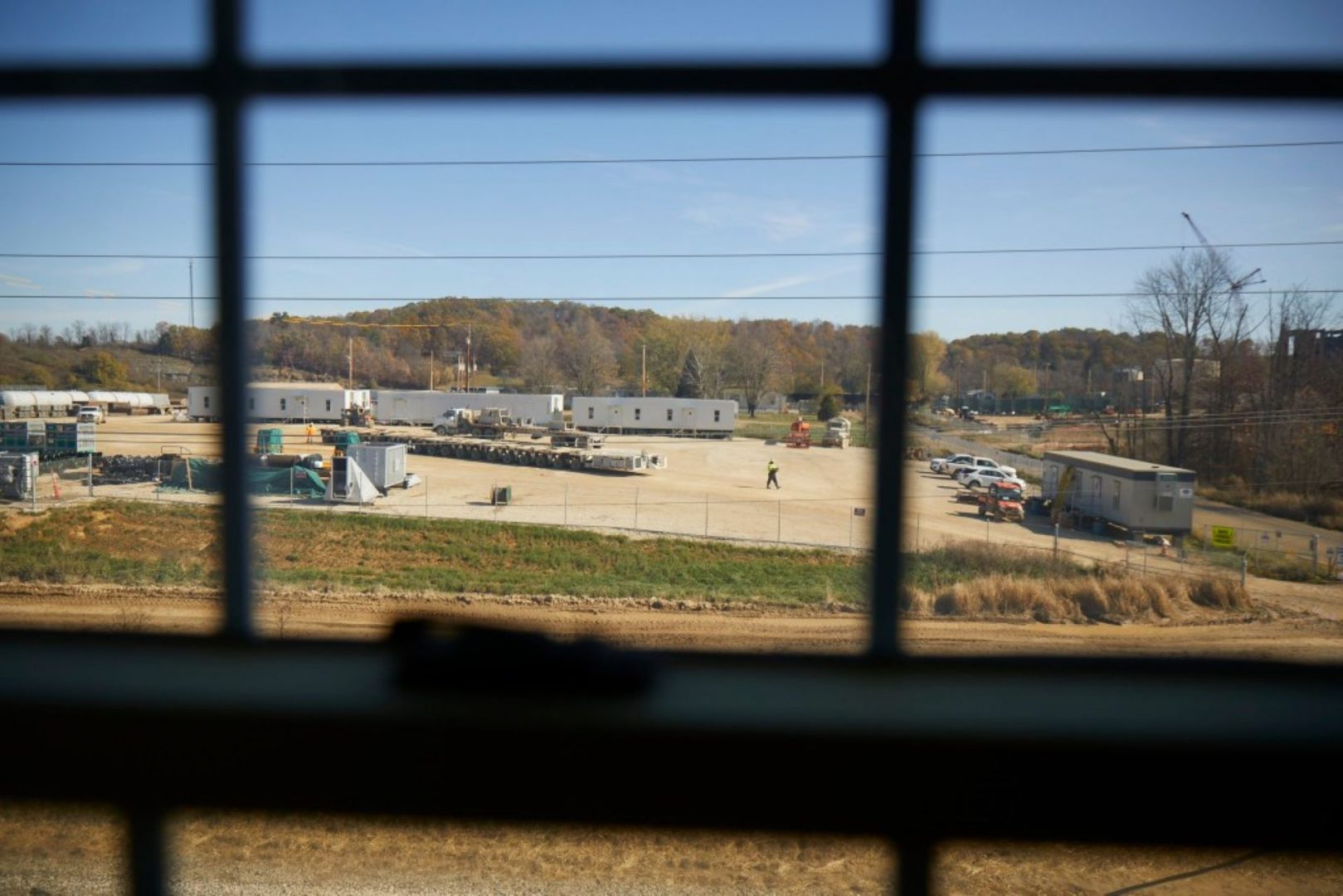 A view from the Young’s window onto the site, which used to be a farm field. 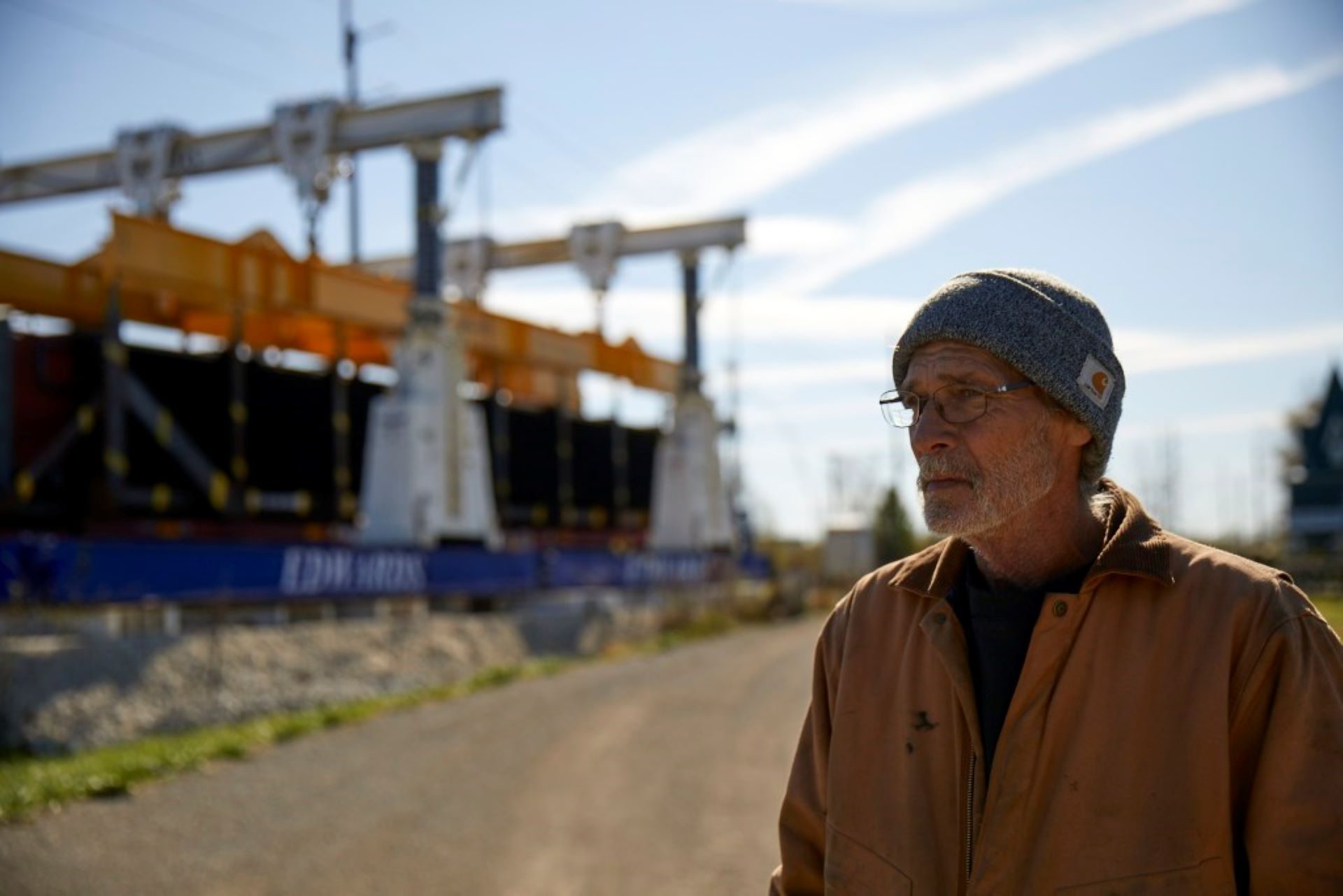 Kevin Young stands along his racetrack, next to the construction site.

Kevin and Marlene Young built their house in the country, so they had space for horses. “I was raised around horses, and that’s my love,” Marlene said.

With names like Buckeye Blast and Creekside Pete, their horses aren’t just pets. They built a half mile track to train them as racehorses.

“If you see my track, the polls out there are placed 1/8 mile apart, and that’s how you clock a horse to tell how fast you’re going,” Kevin said. Their horses have won tens of thousands of dollars in prize money.

Surrounded mostly by farmland here in Guernsey County, Ohio, 65 miles west of the Pennsylvania border, they have space to grow grass for hay. The Youngs also built their home into something of a tourist business. When a scenic railroad started running on the train tracks along their property, it would stop here. They opened an antique shop, and even hosted weddings in the outdoor setting.

“We’re getting ready to retire. I thought we had it handled,” Marlene said. “We were going to do the horses and this and that and everything and relax, about even got it all paid for.”

Visiting them now, things don’t seem handled. Big trucks drive past the house throughout the day. The farm field next door has become an industrial construction site. The air is often filled with dust — there’s a thick layer of it on their new truck. Some nights, bright construction lights shine through their windows. “I mean, come on man, that’s unbelievable,” Marlene said.

In the summer of 2019, Caithness Energy started building one of the largest natural gas power plants of its kind in the nation. Thanks to fracking, cheap natural gas is replacing coal to generate electricity. According to the U.S. Energy Information Administration, this site is one of 30 natural gas-fired generators planned in Ohio and Pennsylvania. EIA expects 231 new utility-scale natural gas generators to be built in the U.S. by 2024.

There’s already a pipeline that will run natural gas from the region to this site. Once constructed, the Guernsey Power Station will generate 1,875 megawatts, enough power, the company says, for 1.5 million homes.

But the Youngs don’t want to live next door to it. Like others who live nearby, they say the construction has caused cracks in their walls.

“My dishes shake. My bedroom is on the second floor, and it’s like you put a quarter in one of them beds,” Marlene said. “That’s how it vibrates.” 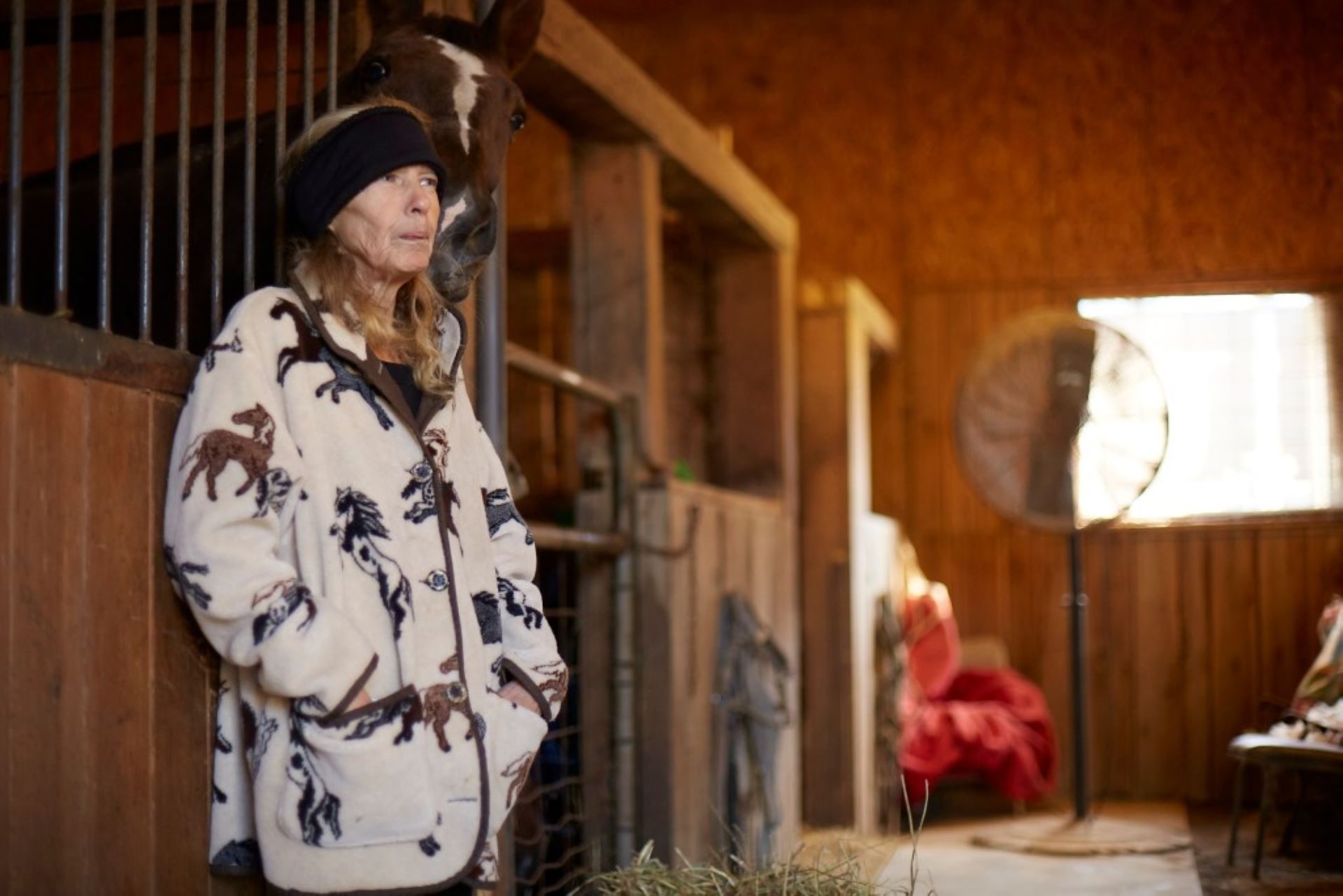 Marlene Young in the horse barn. She sold one of her bests horses because she couldn’t train him.

Before it was a farm field, the site was a coal mine. To stabilize it, Caithness got a permit from the Ohio EPA to drill about a thousand holes in the ground and fill them with cement grout.

The land was also known to flood, so the company is moving dirt in some spots to raise it 20 feet. But Kevin said when it rains, water now runs off, flooding his property.

In November, Ohio EPA issued two notices of violation to Gemma Power Systems, the company building the plant for Caithness, for problems with erosion and sediment running off the property.

But much damage has already been done.

One of their horses got startled by the construction equipment just over the fence, and injured itself. “And she was laid up for a month, and we had to dress this leg every day,” Kevin explained.

Between incidents like that, and the dusty air, the Youngs have stopped training their horses, sometimes even putting them on respirators. Marlene falls apart when she talks about her best horse, Creekside Pete.

“I had to sell him to get him out of here,” she sobbed. “I put big boards up so he wouldn’t come out of his stall because of the stuff going on. I sold him so he wouldn’t hurt himself.”

Caithness has bought out three families in this neighborhood for the plant. At this point, the Youngs want a buy out too, but so far they say the company hasn’t approached them.

Even a buyout can be difficult

One of the homeowners who received a buyout is April Ball. Until recently, she lived down the street from the Youngs. Ball grew up there, and inherited the house on an acre of land after her parents died. She thinks about the green fields and trees around it, and of walking barefoot to fish in the creek.

“It’s just sad. I think about it every day. It never goes away,” Ball said, sitting on the back porch of her new house in the town of Cambridge. “I think about it when I wake up, when I’m at work, after work, in the evening.” 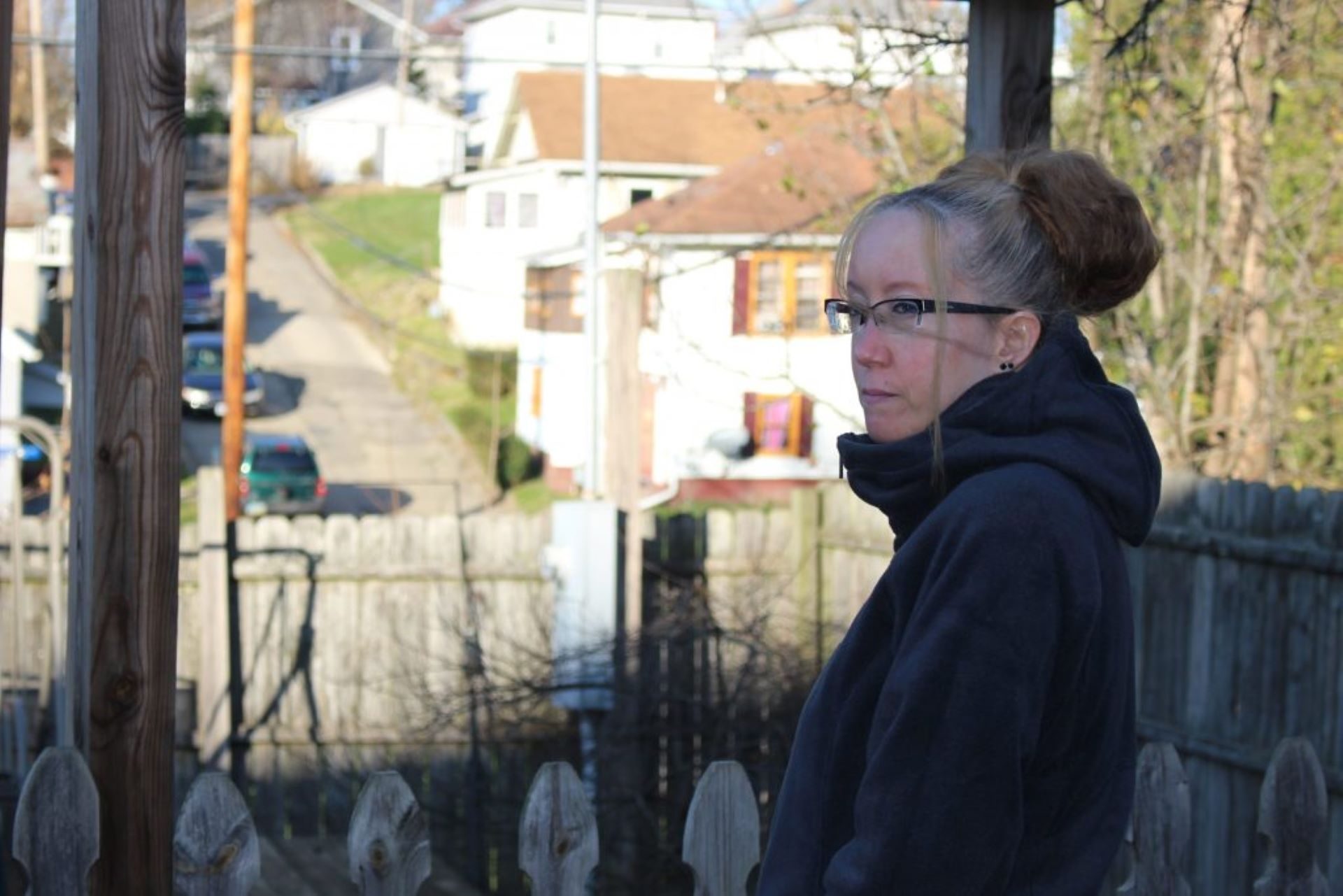 April Ball at her new home in town of Cambridge, Ohio. She would have preferred to live in the country.

When the gas plant was under consideration, Ball, a housekeeper at a nursing home, wasn’t able to get to a community meeting. She had no idea how much it would impact her life.

The construction company fenced around her house, and put up big trailers along the property line. Once the construction began, her ceiling cracked and water in her toilet started coming up black. “You can’t live like that,” she said.

An attorney for Caithness offered her fair market value for her house. She didn’t have money for her own lawyer, so even though it wasn’t enough to buy another home in the country, she took the deal.

“Part of me wanted to leave, but then a part of me just wanted to stay. This is my home,” Ball said. “And how dare these people come here and do this?”

A billboard for the region’s economic development

But many people in the area see the new natural gas plant as a hope for the region’s future. When Caithness came here in 2016, Norm Blanchard, economic development director for the region, was thrilled by the idea of a $1.6 billion plant. “For us, it was almost like a carnival coming to town,” he said.

The company is spending $25 million to prepare the site, according to Blanchard, and has promised $42 million dollars to the local school system over 32 years.

It promised local workers would help fill a thousand construction jobs. But labor unions claim local people have not been hired, something Caithness denied in an email statement to The Allegheny Front. 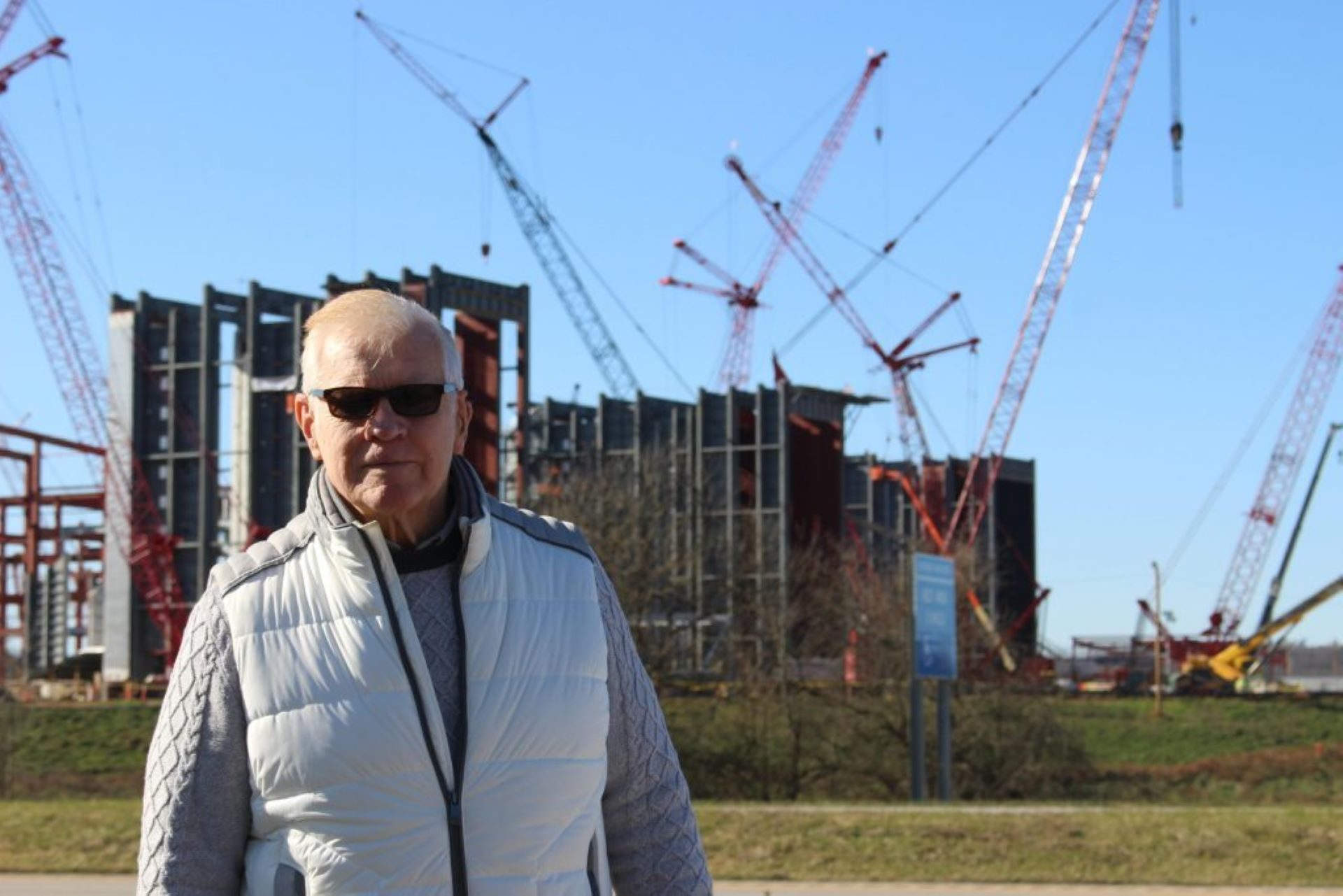 Norm Blanchard stands along I-77 highway, in front of the construction site for the Guernsey Power Station, a project he says will be good for the region.

Once it’s completed in 2022, the plant is expected to employ 30 high tech workers. Blanchard wishes it was more, but he’s not complaining. As he stood along the I-77 highway, looking at the huge construction site, he said the eight cranes are like a billboard for economic development here.

“Something like this, to be able to locate it here, puts you on the map,” Blanchard said. “We’re hoping that others will ride the coattail. They’ll say, ‘that kind of development is coming to Guernsey County, there’s other things that we can do.’ ”

Few protections for people in the path of development

Like many areas near power plants, the poverty rate here is high. In Byesville, where this plant is being built, the poverty is more than twice the national average.

According to environmental attorney Dave Altman, many communities jump at the money and jobs offered by deep-pocketed energy companies.

“Local governments, somewhat understandably, at times will blindly accept promises and really operate in denial of the collateral damage to the people who are left behind,” Altman said.

Kevin and Marlene Young said they haven’t gotten help from local officials. They shouldn’t expect the state government in Ohio to protect them either, according to Altman.

“There are definitely laws, that’s for sure, and the law should be protecting people,” he said. “But I’m not kidding you, the agencies that you think are protecting you in Ohio often see their primary client or customer as the regulated entity.”

On December 20, the Trump administration will eliminate a 1974 rule approved as part of Ohio’s federal air quality plan, officially called the State Implementation Plan or SIP. The rule allows people to take polluters to court to stop environmental nuisances like dust and odors that endanger health and property.

“They would have been able for 40 years to take that evidence [of a nuisance] into court, and now they won’t be able to do that directly anymore,” Altman lamented. “I think that it’s one of the great travesties that people don’t even know happened to them.”

Without the nuisance provision in the SIP, Altman said that people will only be able to sue polluters for damages, something he said is difficult. “They need to recover large damages to give lawyers an incentive to take the case. People want to live their lives, not wait until they have large damage cases.”

In an email statement, Ohio EPA spokesperson Heidi Griesmer said Ohio did not request removal of this rule, but does not oppose it being withdrawn by US EPA. “Many other states across the nation, including all Great Lakes states, had their nuisance rules withdrawn from their SIPs, or never had them in their SIPs in the first place,” she said. “Ohio EPA retains full authority to ensure compliance with the rule and can initiate enforcement action when necessary.”

But that hasn’t proven helpful to people experiencing pollution problems, according to Altman. “Every citizen I know who has used the provision to reduce or stop the pollution tried to get the O[hio] EPA to enforce the rule for years and got nowhere,” he responded.

The Guernsey Power Station received air permits from Ohio EPA, and has limits for pollutants like volatile organic compounds, carbon monoxide, and particulate matter. “[C]omputer modeling was completed before permit issuance, and no adverse health or welfare effects are expected,” Griesmer said.

But the Youngs don’t want to wait to find out. Marlene recently started having serious health issues. Kevin wants to protect them both.

“I’d just assume get us a little trailer or something, and clear out of this whole state, and not have to deal with any of this,” he said.