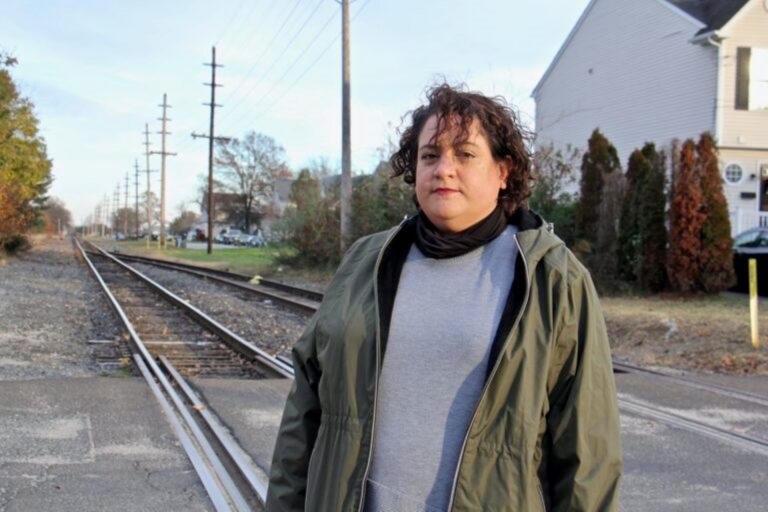 This article was updated to reflect the Delaware River Basin Commission vote Wednesday.

Plans for a new half-billion-dollar liquefied natural gas export terminal on the Delaware River in South Jersey were greenlighted by the Delaware River Basin Commission on Wednesday. But opponents say they will challenge the LNG project in federal court, and they’ve gained the support of Hollywood stars like Leonardo DeCaprio and Mark Ruffalo, along with climate leaders like Bill McKibben.

One of the people who testified at the hearing was Vanessa Keegan, who lives in the small Gloucester County community of Gibbstown. Keegan and her boyfriend, who have three sons between them and work in the restaurant industry, saved up enough to buy their home just a few blocks away from the planned export terminal more than a year ago. She learned about the terminal from a neighbor.

“We’re killing our planet. That’s the big existential thing,” said Keegan, who since the pandemic quit her job so she could help with remote learning for her 3-year-old son and 10-year-old niece. “But me personally, you are putting my family in danger. If an accident happens with [liquefied natural gas], we don’t get to show up the next day and say, ‘Look, I told you so.’ We won’t be here. My neighbors won’t be here. This neighborhood will not be here. That’s terrifying.”

Pennsylvania’s shale gas is so abundant and cheap right now, producers need to find new markets overseas. The developer of the project, Delaware River Partners, a subsidiary of New Fortress Energy, wants to build the export terminal on the site of a former DuPont dynamite manufacturing plant.

The overall plan would ship gas from Pennsylvania’s Marcellus Shale to a new liquefaction plant in Bradford County, where refrigeration units would chill it to negative-260 degrees Fahrenheit to turn it into a liquid. The part of the plan that scares a lot of people like Keegan is the transport. LNG would be shipped 200 miles south down the I-95 corridor by truck and/or rail through some of the most densely populated areas of the East Coast to Gibbstown.

Trucks or rail cars full of flammable liquefied natural gas would roll about a block and a half away from Keegan’s home. The company secured a special permit from the federal Pipeline Hazardous Material Safety Administration to move the LNG by rail. The permit allows two 100-car trains to transport the gas each day. It’s the longest permitted LNG rail route in the country because, until recently, using trains to transport LNG required that rarely issued special permit.

On a recent day, Keegan stood on her porch and pointed to the train tracks that would be used to transport the LNG.

“So they want special permits to transport them right there,” she said. “That train track that you could skip on down to in about a minute and a half. And that terrifies me.” 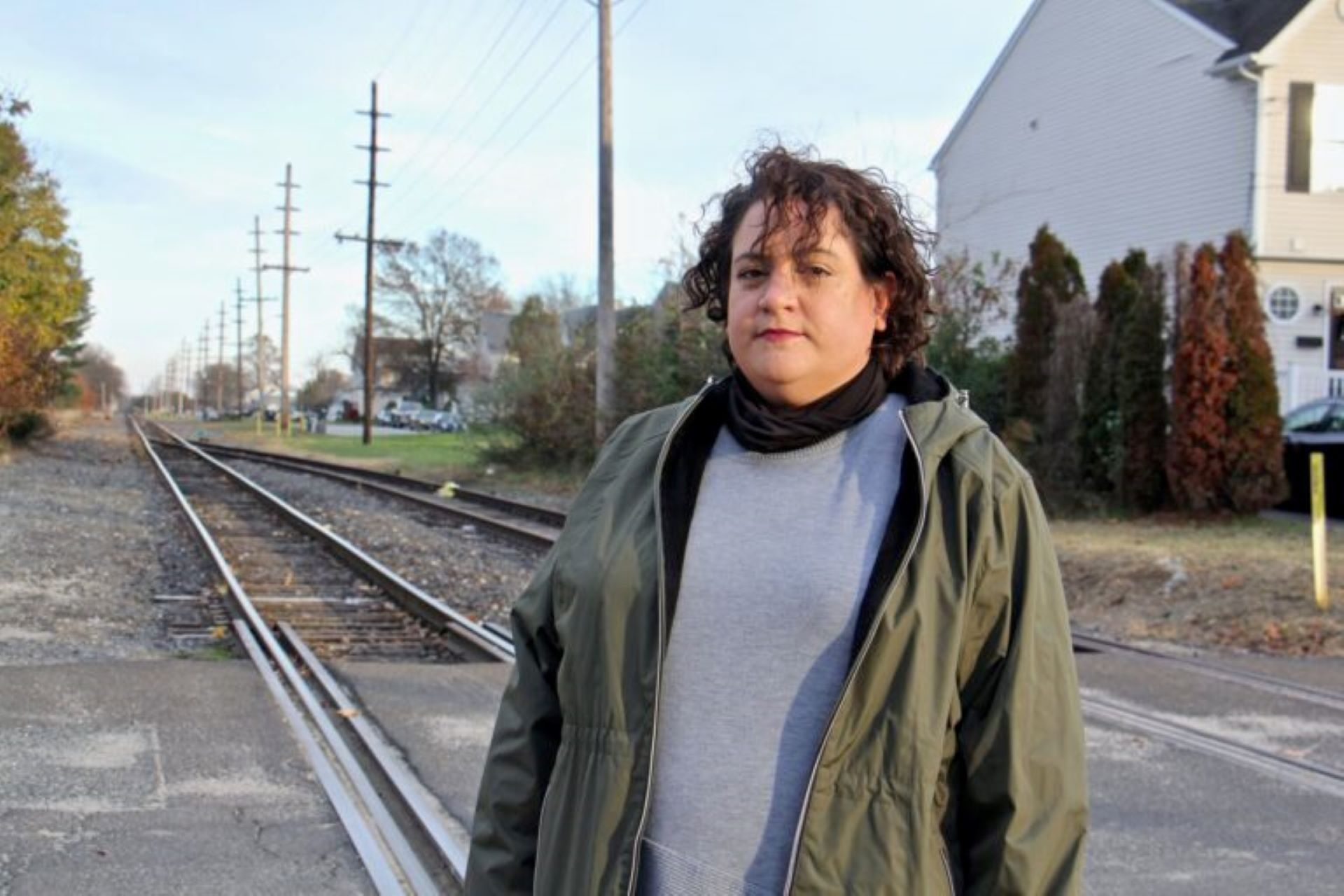 Vanessa Keegan, 41, lives in Gibbstown, New Jersey with her boyfriend and 3-year-old son one block from the railroad tracks that will carry liquid natural gas to an export facility on the Delaware River.

Last summer, the Trump administration issued an executive order that now allows LNG by rail through the normal permitting process. Fifteen state attorneys general, including those in Pennsylvania, New Jersey and Delaware, challenged the move, saying it put people’s lives at risk.

“We’re going to court because our families expect our government to put their safety first, not put them in harm’s way,” California Attorney General Xavier Becerra said in a statement. “If only the Trump administration spent as much time trying to solve our current public health crisis as it does creating new public health hazards.” Becerra is now President-elect Joe Biden’s nominee for Health and Human Services secretary.

The decision before the Delaware River Basin Commission, a multistate body made up of the governors of New York, New Jersey, Pennsylvania, and Delaware along with a federal representative, focuses on the dock, dredging and some onland infrastructure for the project. The Delaware Riverkeeper Network has challenged a number of state and federal permits for the project, including those issued by the New Jersey Department of Environmental Protection and the U.S. Army Corps of Engineers. DRN’s Tracy Carluccio said the group will file a federal challenge to the commission’s decision. She said that the site is already highly contaminated, and that dredging and construction will churn up more toxins like PCB’s.

In addition to the railcar permits, a permit issued by the Army Corps of Engineers outlines a plan to transport the gas using 300 to 400 trucks a day, which would drive by a day care center that sits right at the company gate. The Gloucester County Improvement Authority has plans to build a new bypass from nearby Route 44 to divert all the new truck traffic from the center of Gibbstown.

New Fortress Energy and Delaware River Partners did not respond to multiple requests for interviews and would not confirm details of their plans.

Gibbstown sits along one of the most industrialized sections of the Delaware River. It’s directly across from Philadelphia International Airport, and it borders the PBF Energy refinery in Paulsboro to the north. In the late 19th century, DuPont built a dynamite factory along the river. By the 1920s, it was the world’s largest explosives manufacturer, and Gibbstown’s fortunes rose and fell with the now-shuttered DuPont plant.

Today, many of the town’s storefronts are boarded up. The LNG terminal project has the support of some powerful state lawmakers and building trade unions. Keegan said a lot of her neighbors want to see the site redeveloped.

“It seems to be very split,” she said. “Half of the people have seemed to be like, ‘No, it’s tax money into the town. Natural gas is the cleanest of the fossil fuels, you’re overreacting.’ And the other half feel like I do. Like, our safety’s not worth the money. At the end of the day, if we’re not here, what does the tax money matter?”

Keegan worries that because transporting LNG by rail is so new, it’s untested. Opponents say that because it involves a special permit, it’s unclear whether the standards would be equivalent to the requirements for trains permitted under the new guidelines set by Trump’s executive order.

Ray Mentzer, a chemical engineer who teaches chemical process safety at Purdue University, said the containers would have to have a high nickel content to withstand cryogenic conditions. If there were a leak, he said, the LNG would catch fire but not explode.

“If I was the company permitting this, I would be studying very carefully where my LNG trucks were going to run,” he said. “I would not allow them to run through populated areas just in case the unthinkable were to happen. If I was at a town meeting and I lived there, I would want to know: Just what routes are you going to use?”

Mentzer said the specially designed containers that transport hydrocarbons across the country every day have a good safety record. But transporting the gas through densely populated areas increases risk if there’s a leak, he said.

Vanessa Keegan said that in addition to worrying about her family’s safety, she thinks fossil fuel projects like these should be abandoned in favor of renewables like wind or solar power. As soon as she and her boyfriend bought their house, they put solar panels on their garage roof.

“I don’t understand how you can look at that [LNG project] and say, ‘Yes, this is the way we need to go,’” said Keegan. “Wind power is where it’s at. If we switched our focus, the amount of change that could be made, it would be mind-blowing.”

The Gibbstown export terminal is just one of many fossil-fuel infrastructure projects that state and national regulatory agencies keep greenlighting despite growing evidence of an out-of-control climate — more wildfires, worsening storms, droughts and floods.

Arvind Ravikumar, who teaches energy and climate policy at Harrisburg University, said the conversion of coal power plants to natural gas has helped cut carbon emissions worldwide. But countries have a long way to go to reach the targeted goals of the 2015 Paris Climate Agreement  — where they promised to cap global warming at 2 degrees Celsius above pre-industrial levels.

“The infrastructure that we’re building now today will last for decades,” he said. “The question is, is that compatible with our long-term targets? I don’t think it is.”

Right now, Ravikumar said, investors in projects like the Gibbstown terminal are counting on fossil-fuel dependency for decades to come. But that could be changing. One of the original customers for the LNG exports was in Ireland. Recently, the Irish High Court blocked the construction of an import terminal in the Shannon estuary there that was backed by New Fortress Energy. Ireland’s new coalition government, which includes the Green Party, opposes fracked gas imports from the U.S.

Similarly, a French company backed out of a plan to import American shale gas after pressure from campaigners who said it contradicted the country’s climate goals.

If the overseas export terminal gets built, none of the gas will go to power New Jersey homes. Instead, the state is promoting a large coastal wind farm off Atlantic City, which will help New Jersey reach its goal of all renewables by 2050. The state recently announced its plans to become the “backbone” for wind energy transmission for the East Coast.

The reporting for this story is part of the broader “From the Source” project and is supported by the Lenfest Institute, the National Geographic Society, and the William Penn Foundation.