Vice President Mike Pence speaks at a campaign event at a PennEnergy Resources site on Wednesday Sept. 9. 2020, in Freedom, Pa. 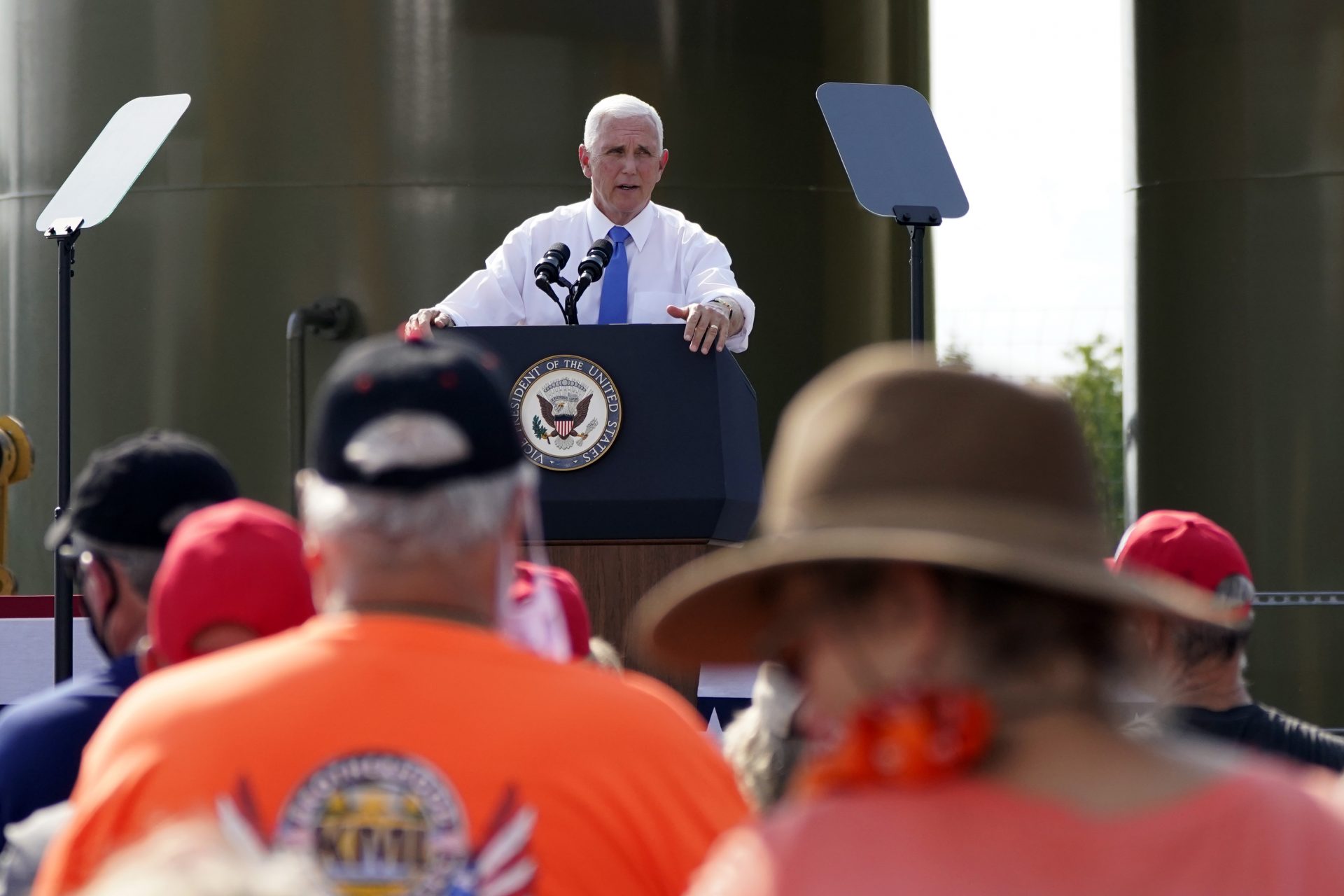 Vice President Mike Pence speaks at a campaign event at a PennEnergy Resources site on Wednesday Sept. 9. 2020, in Freedom, Pa.

In a county where the local unemployment rate is twice the national average, Vice President Mike Pence touted the Trump administration’s economic record before the pandemic at a Workers for Trump rally on Wednesday.

“We’ve revived our economy by cutting taxes across the board for businesses large and small,” Pence said. “We rolled back federal red tape. We unleashed American energy as never before, and an American renaissance has come to Pennsylvania and all across the heartland.”

Pence went on to hit other key campaign issues: from standing with law enforcement, to appointing conservative justices to uphold anti-abortion values in the court system.

The rally was held at a Freedom, Pa. natural gas drilling site owned by PennResources, a drilling company that works in Butler, Beaver and Armstrong counties. The crowd appeared to be under a state limit of 250 people for outdoor gatherings, although very few attendees were wearing masks or social distancing.

“Last week Joe Biden came to Pittsburgh after months of campaigning on a plan to abolish fossil fuels,” Pence said. “I heard him say ‘I am not for banning fracking.’ Well, maybe he just forgot what he said before.”

Biden’s platform does not include a ban on fracking. But he has said in the past that he would oppose new drilling sites on federal lands — a stance that would have limited impact in Pennsylvania, where fracking is done on private land. On a campaign stop to Pittsburgh last week, Biden reiterated his commitment to jobs in the natural gas industry, which Pence referred to Wednesday.

“I am not banning fracking,” he said. “No matter how many times Donald Trump lies about me.”

Republicans have long said that Democrats oppose fracking. Just last week at a campaign rally in Latrobe, President Trump falsely said 940,000 jobs would be lost in the state if Joe Biden was elected. In reality, between 20,000 and 50,000 Pennsylvanians are supported by the natural gas industry, according to the state’s Department of Labor and Industry.

Fracking has been a tricky issue for Democrats in the region to navigate. While unions like the jobs the industry creates, many progressive and environmental groups oppose the practice. But Pence’s upbeat message about the administration’s record itself was at odds with the economic reality for some residents in Beaver County, where more people are out of work at nearly twice the national average. The unemployment rate for the Southwestern Pennsylvania county is 15.8 percent, according to the latest data from the Pennsylvania Department of Labor & Industry. The national average is 8.4 percent. Two million Pennsylvanians have filed for unemployment since March.

“Workers across the commonwealth were hurting long before covid hit our shores,” said Terri Mitko, chair of the Beaver County Democratic Committee, in a press call prior to Pence’s appearance. “Home ownership, a post high-school education and the wages to support a family have become harder and harder to obtain.”

Others criticized the Trump administration’s steel and aluminum tariffs, which have proved costly for several steel producers in the region.

“He had promised that he was going to bring back steel mills and we were going to be stronger than ever,” said Democratic state house candidate Bob Williams. Williams serves as a shop steward for Steelworkers local 1211 and works nearby at Hussey Copper. “I’ve seen two companies close their doors and a third [drop] to 25 percent capacity.”

“Pennsylvania workers deserve a president who will crack down on companies shipping jobs overseas and create good-paying manufacturing jobs in every region of the Commonwealth,” said Biden for President Pennsylvania State Director Brendan McPhillips. “Joe Biden has a plan to help Beaver County recover from the economic crises the Trump-Pence Administration has sown and will make sure our future is Made in America.”

Pence made another campaign stop in Westmoreland County at an anti-abortion event earlier Wednesday.