Are gas royalty owners buyers or sellers? In a court fight over royalties, the answer to that question could make all the difference to landowners | StateImpact Pennsylvania Skip Navigation 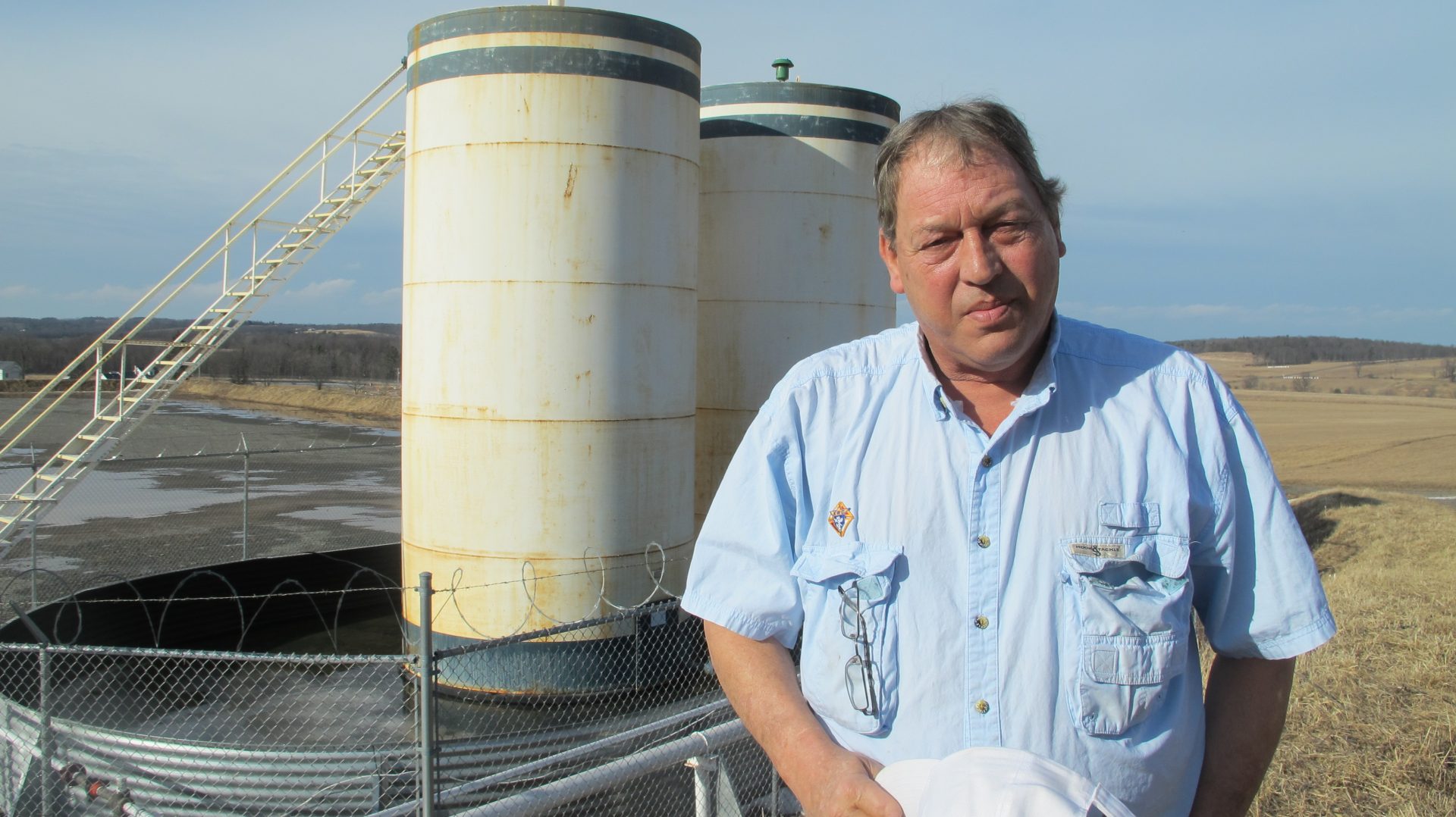 When natural gas drillers started rolling into Pennsylvania during the shale boom over a decade ago, some landowners got their hopes up.

“Depending on the amount of acreage you had, people had big expectations and small expectations,” said Jackie Root, a consultant and membership director of the Pennsylvania Oil and Gas Landowner Alliance.

Some farmers who leased their mineral rights were able to pay cash for new equipment or barns. Some landowners got enough money to put their kids through college.

But for many, those expectations never materialized.

“It’s like they’re led up to the river and then actually can’t get in there to drink,” Root said.

Some say the drillers aren’t paying them what they’re owed. Many have joined class action lawsuits in an attempt to recover their losses. Some have reached settlements with companies, while others are still waiting on a final decision.

Under the direction of former Gov. Tom Corbett and state Sen. Gene Yaw (R-Lycoming), then-Attorney General Kathleen Kane started investigating one driller, Chesapeake Energy, in early 2014. Her office filed a lawsuit in late 2015, alleging the company deceived landowners into leasing their mineral rights. The office said the case could affect more than 4,000 Pennsylvania landowners who signed leases with Chesapeake.

Now, after years of delays, a case in Pennsylvania’s Supreme Court could determine whether the AG’s case can go forward.

At the heart of that case is who is protected by the state’s Unfair Trade Practices and Consumer Protection Law.

A decision siding with the AG would allow the case to finally be argued in Bradford County Court, where it originated. If they win there, royalty owners could have another tool when disputing contracts and payments with gas companies. Landowners hope that tool will ultimately help them get paid what they claim they’re owed.

Under a traditional reading of the consumer protection law, the party leasing the rights would get the protection. In this case, that would be the gas company.

But the AG and interested parties say the real issue is bargaining power. And people typically hold less than big companies.

Root said drillers “hold all the cards, all the power and pretty much all the information,” which puts the landowner at a disadvantage. Ross Pifer, director of the Center for Agricultural and Shale Law at Penn State, said the case is a matter of how the law is viewed.

The AG’s office says Chesapeake Energy, Anadarko Petroleum and subsidiaries of both companies used deceptive, misleading, and unfair tactics in securing natural gas leases from landowners. The office wants to argue the case under the consumer protection law and plans to pursue antitrust remedies under the same law.

The Supreme Court is being asked to decide whether the AG can use the law to argue this instance. The court also has the option of saying both parties are wrong and could present an alternative.

Oral arguments done via video conference before the Supreme Court justices on May 27 focused on the technical language of the consumer protection law and the General Assembly’s intent in enacting it.

Attorneys for the gas companies said the law doesn’t apply in this case, because the landowners are sellers, not consumers.

Stephen Cozen, an attorney representing Anadarko, said the company is not distributing a product or service, but is leasing mineral rights from landowners. He said that means Anadarko is not engaged in trade and commerce as defined by the consumer protection law, and so its terms are inapplicable.

Senior Deputy AG Howard Hopkirk said the law is not limited to sellers, but may be used against any person engaged in unfair and deceptive trade practices. He said reducing the law’s scope would diminish the rights of Pennsylvanians.

“Why has the Attorney General not taken the position that the economic reality of this transaction is that the gas extractors are selling their services as gas extractors?” Donohue asked, adding she did not think an attempt to get the broadest possible interpretation of the law would be legitimate.

When Justice Kevin Dougherty questioned what was deceptive about the companies’ business practices, Hopkirk said the companies did not disclose the level of competition and that landowners might have been able to get higher prices for their leases.

“Your underlying premise is that landowners are ignorant to what they’re doing with their land?” Dougherty asked.

“They would be ignorant no matter how sophisticated they are regarding the contractual relationships between Chesapeake and Anadarko,” Hopkirk said.

AG Josh Shapiro called the filing “yet another tactic to delay and deceive” royalty owners.

“The facts are clear — Chesapeake owes the good people of Bradford, Susquehanna counties millions of dollars,” Shapiro said in a statement. “They can run to bankruptcy court but they can’t hide from us.”

They say the state legislature has had opportunities to add consumer protection language into laws governing oil and gas leases, but has declined. They argue “the courts should not legislate where the General Assembly has elected not to do so.”

The AG alleges the companies convinced landowners to lease the mineral rights to their land with an expectation the landowners would be paid royalties from the oil and gas extracted. But because of what the AG’s office says are misrepresented post-production costs, many royalty owners have seen low payments, no payments, and even negative balances. The office also alleged the companies had a non-compete agreement so landowners had less bargaining power.

A 1979 state law guarantees landowners a minimum one-eighth, or 12.5 percent, of the royalties earned from the oil or gas extracted from their land. But the definition of the guaranteed minimum is in dispute. Jackie Root’s group is advocating legislation in Harrisburg to clarify, but that would only apply to future leases.

Dan Brier, an attorney representing Chesapeake, argued that if the Supreme Court lets this case move forward, the consumer protection law could become a general, all-purpose business regulation that could be invoked by any county district attorney.

“This is a test cast to see if CPL is so expansive that it can be invoked by the commonwealth to seek antitrust remedies and seek relief on behalf of sellers, not consumers,” Brier said.

Pifer, at Penn State, said he doesn’t see how the ruling in this case would affect transactions outside oil and gas leases, unless there was another such instance of uneven bargaining power.

Pifer said if the court allows the case to go forward under the consumer protection law, it could have a big impact for landowners. Then, courts would not be limited to the contract’s language in disputes, but could also look at the circumstances surrounding a lease, such as what was said during the contract negotiation.

Because leases are often transferred between companies, Pifer said they could be on the hook for previous negotiations, and not be able to rely solely on the contract language in future disputes.

StateImpact Pennsylvania · Why some strike it rich in the gas patch, and others strike out

Dean of the Creighton University School of Law Joshua Fershee has watched other cases against oil and gas companies play out in states such as Michigan and West Virginia. He said he hasn’t seen the Pennsylvania AG’s angle used specifically before.

He noted oil and gas leases are stylistically very similar to what consumer protection laws were designed for, giving the example of a traveling salesman. The salesman shows up on a doorstep offering to sell something, like insurance, which might not have any value. In the case of gas leases, the person showing up on the doorstep is offering to buy something, but the gas companies are still the aggressors in the situation.

But he was unsure of the case’s potential impact.

“I frankly don’t see this as one of the bigger risks to shutting down oil and gas development,” Fershee said.

He said, if the case does not go forward, it’s possible the legislature could take action.

Pa. House moves to block RGGI entrance as DEP estimates it will save money and lives