Shell's multi-billion dollar ethane cracker under construction in Beaver County, Pa., in February, 2020, will be permitted to make 1.7 million tons of plastic and emit over 2 million tons of carbon dioxide per year. Photo: Reid R. Frazier 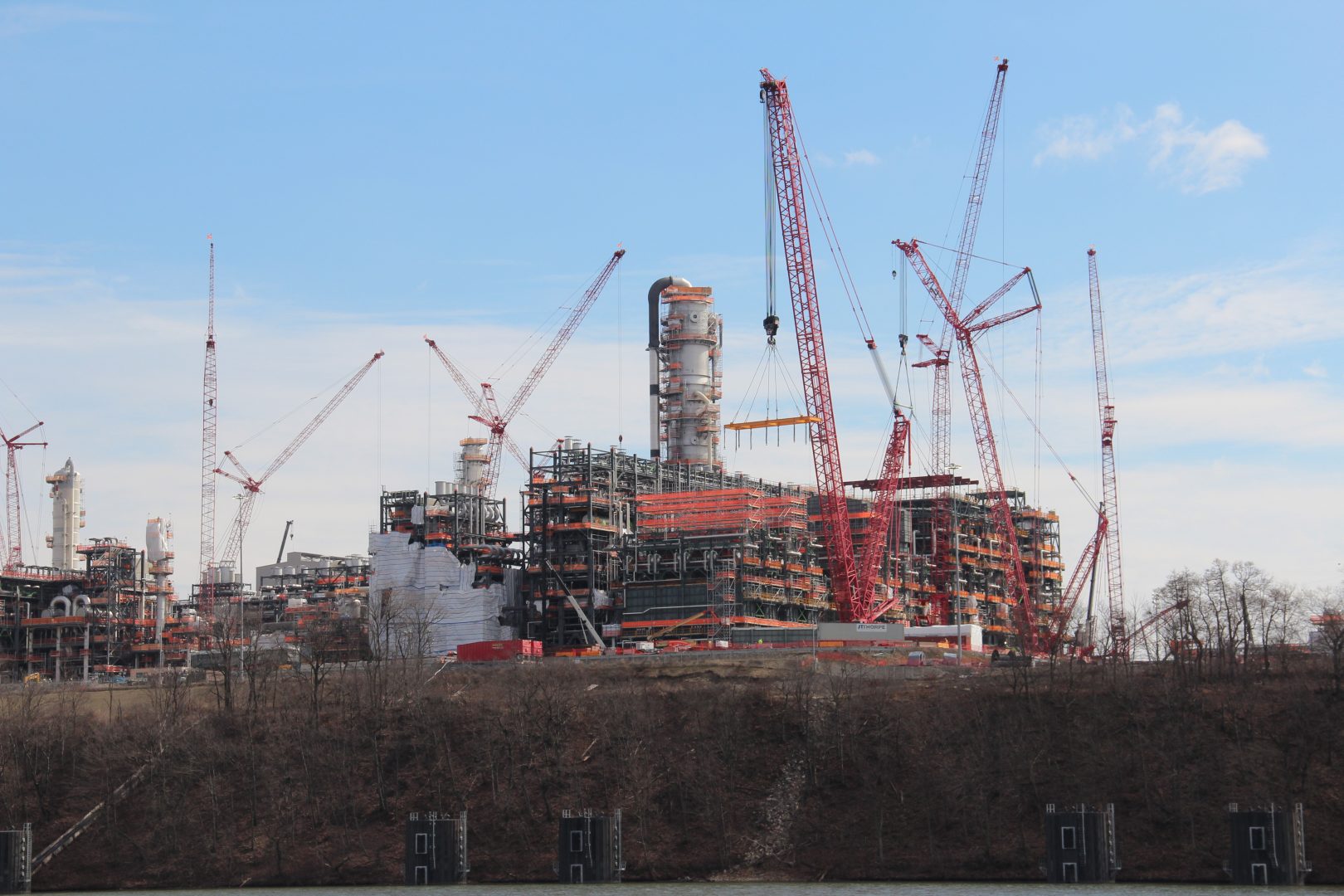 Shell's multi-billion dollar ethane cracker under construction in Beaver County, Pa., in February, 2020, will be permitted to make 1.7 million tons of plastic and emit over 2 million tons of carbon dioxide per year. Photo: Reid R. Frazier

Shell says construction will go ahead at its Beaver County petrochemical plant despite the outbreak of the novel coronavirus.

The company says it is following guidance of federal regulators and altering some aspects of its operations to promote social distancing at the site, where 6,000 people are working, even as some workers said they are worried about transmission of the virus there.

Several workers, speaking on condition of anonymity because they believe speaking publicly could jeopardize their jobs, said they were concerned about the ease of transmission on a site with so many workers. They said social distancing is difficult on the shuttle buses workers must take into the site, and because large groups of workers attend meetings and meals together.

KDKA-TV in Pittsburgh reported Monday that workers at the site said conditions there were “unsanitary” and “raised concerns” about crowded spaces.

But the company is staying open and taking steps to reduce the risk of transmission, said Shell spokesman Michael Marr.

“There have been no presumptive or confirmed cases of Coronavirus among our site’s workers,” Marr said.

Marr said “health care professionals” from the company and its construction contractor Bechtel “are monitoring the situation closely and providing ongoing guidance to site leaders about how to address the challenges associated with the virus.”

Among the changes to its operations: the company is obtaining more buses to reduce crowding on the shuttles that convey workers from satellite parking lots onto the site; staggering shifts and lunch times to promote social distancing; and curtailing large meetings.

It has also “initiated regular deep cleaning including our buses, common areas and trailers,” Marr said in an email. “We are also cleaning lunch areas between lunch times and have increased the placement of hand-sanitizer dispensers across the site.”

The company is “reviewing new guidance from OSHA and will incorporate relevant new elements from that guidance into our response, as appropriate.”

On Monday, state health officials reported the first positive case for the coronavirus in Beaver County. There are 10 cases in Allegheny County and two in Washington County. New research from China suggests people without symptoms can still spread the virus.

Union leaders expressed confidence in the steps the site managers had taken to increase social distancing.

“They’re taking the necessary precautions which we all are taking to this situation that is so new to us,” said Ken Broadbent, business manager of Steamfitters Local Union 449.

Larry Nelson, president of the Beaver County Building and Construction Trades Council, said anyone who felt worried about conditions on the site could go home and collect unemployment benefits. When the virus has passed, they’ll be eligible to get back on the site.

“If you feel you have some anxiety about working there or some reservations about being around a lot of people, then you need to remove yourself from that situation,” Nelson said. “The bathrooms are cleaned, extra times. They’ve actually put more workers on, to clean and sanitize.”

Nelson said he was at the Potter Township site Monday, and it looked like “a normal job site.”

“I talked to a number of different workers, but nobody, nobody presented any fears to me,” Nelson said. He said he got there after lunch was over and did not observe any of the regular worker meetings.

Nelson said unions at the site had agreed to changes in the lunch schedule to reduce crowding. “We’re trying to limit somewhere right around 175 to 200 people in a tent that normally holds around 500.”

The White House has recommended gatherings be limited to 10 people.

Nelson said people are leaving the site during the virus outbreak and that if that keeps up, overcrowding “could take care of itself.”

But several workers told StateImpact Pennsylvania and the Allegheny Front they were worried about the proximity of workers on shuttle buses and in common rooms like worker lunch tents.

The company did not respond to requests for comment about the workers’ concerns. But Nelson, of the building trades council, said he thought the workers were being protected by Shell’s actions. “You know, this has come upon us pretty quick here in the last week. And, you know, we can’t expect everything to change overnight.”

On Monday afternoon, Pennsylvania Gov. Tom Wolf ordered all non-essential businesses to shut down for two weeks. That order did not apply to construction sites like Shell’s, but a release from Wolf encouraged those sites “to employ social distancing practices.”

Wolf’s office did not respond to questions about whether the governor would take further action on the Shell site or other construction projects, and referred to its release.

Pennsylvania AFL-CIO president Richard W. Bloomingdale sent a letter to Wolf asking for “action to protect all working people across the Commonwealth, union members or not.”

Those actions include paid sick leave and “enhanced unemployment benefits” for all workers.

“No one should be required to choose between their paycheck and the health and the safety of themselves and others,” the letter said.

Food & Water Action, an environmental group, called on the governor to shut the plant down.

“The company’s assurances that it will conduct more thorough cleaning practices are totally insufficient,” the group said in a statement. “While Governor Wolf has pushed ‘non-essential’ businesses to close for two weeks, he should take more proactive steps to keep Pennsylvanians safe during this public health crisis.”