Democratic Gov. Tom Wolf delivers his budget address for the 2019-20 fiscal year to a joint session of the Pennsylvania House and Senate in Harrisburg, Pa., Tuesday, Feb. 5, 2019. 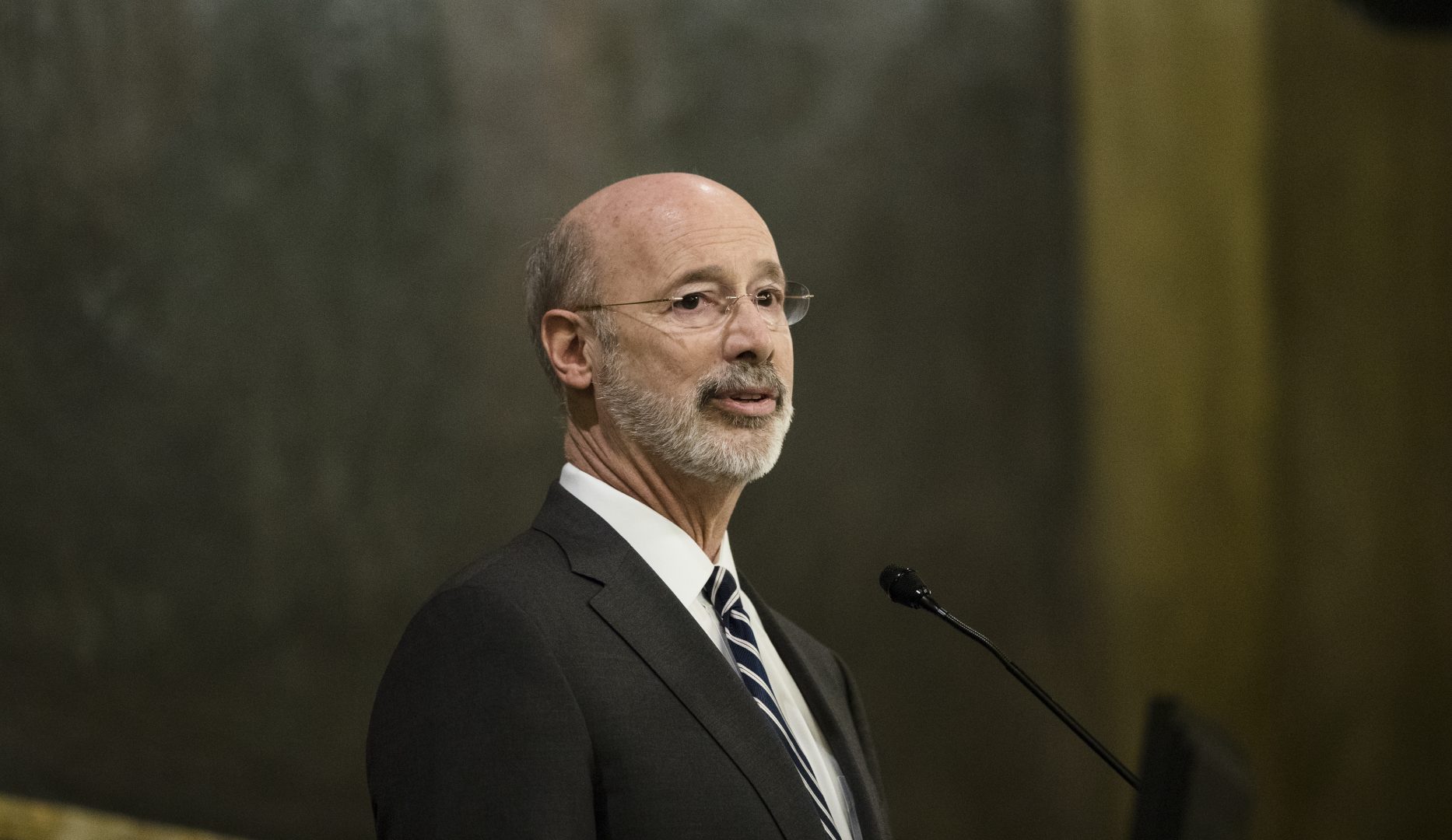 Democratic Gov. Tom Wolf delivers his budget address for the 2019-20 fiscal year to a joint session of the Pennsylvania House and Senate in Harrisburg, Pa., Tuesday, Feb. 5, 2019.

Gov. Tom Wolf proposed money for additional staffing at the Department of Environmental Protection and the Department of Conservation and Natural Resources, and he renewed his support for a package of pipeline reforms, in his annual budget released Tuesday.

The DEP would get $171.6 million from the general fund in Wolf’s proposed budget. Other sources of funding for the agency would result in a total budget of $553.8 million.

After decades of cuts to DEP under both Democratic and Republican administrations, it’s the first time proposed spending from the general fund for environmental protection has risen above $165.6 million, the level it reached in 1994-1995, according to former DEP Secretary David Hess.

“Those cuts had to be backfilled by permit fee increases,” Hess said. “Those kinds of fee increases were unsustainable.”

Hess said when he ran DEP from 2001-2003, funding for the agency did not depend so much on permit fees. About half of DEP’s current budget relies on those fees, while just 20 percent comes from the general fund, he said. Federal funds make up the rest. In the early 2000s, permit fees, general fund dollars and federal funds each contributed about one-third.

“The time has come for the people in the General Assembly to really have some serious conversations about this,” Hess said. “I see a lot of seeds in this budget that can grow into something that more completely meets our environmental funding obligations.”

The budget calls for an additional $1 million for hiring new DEP staff to support the cleanup of the Chesapeake Bay. Both the state of Maryland and the Chesapeake Bay Foundation recently said they plan to sue the EPA and Pennsylvania for not doing enough to reduce agricultural run-off that contributes to bay pollution.

About $47 million is restored from last year’s cuts to community-based restoration projects that work on improving waterways that feed into the Chesapeake Bay.

DEP’s Bureau of Air Quality would also get a boost under Wolf’s proposed plan, which asks for an additional $1.5 million for new staff. And DCNR would get an additional $2.5 million for new state park and forest rangers. A recent report revealed DCNR has a backlog of maintenance projects underfunded by $1 billion. In total, the new budget would provide 25 new staff members at DEP and 25 at DCNR.

Wolf is also calling on lawmakers to enact a $1 per ton increase in tipping fees for municipal waste landfill deposits as a way to support the Hazardous Sites Cleanup Fund. The fund is expected to become insolvent by the end of this year, the Wolf administration said, and the governor says increased tipping fees would generate an additional $22.6 million. That could help with any cleanup associated with emerging PFAS contamination.

“It’s hard to protect our environment if we don’t have the environmental cops on the beat to enforce the laws and implement programs,” Masur said. “But it would be valuable if we had a long-term plan in order to make DEP and DCNR whole.”

The budget includes a natural gas severance tax to fund Restore PA, a set of infrastructure projects. It’s the sixth time Wolf has introduced a severance tax, which has been blocked by the Republican legislature.

The oil and gas industry opposes the effort, saying it has generated almost $2 billion in impact fee money since 2012.

“Responsible natural gas development has been good for the state economy, good for local economies and good for Pennsylvanians,” said API-PA director Stephanie Catarino Wissman. “This initiative doesn’t restore Pennsylvania; it jeopardizes Pennsylvania’s economy and the hundreds of thousands of jobs supported by natural gas production.”

Opposition to Restore PA comes from the political right as well as some on the left, who see it as a way to continue fossil fuel development.

“Restore PA is structured around a severance tax that lasts for another 20 years,” said Karen Feridun of the Better Path Coalition. “It’s bad enough that we would be committed to 20 more years of fracking, (and) it includes incentives for the petrochemical business.”

Republican lawmakers criticized spending in the overall budget. House Republican leaders said in a statement that they “share many of the same goals,” such as safe schools and jobs, that Wolf talked about.

“However, we believe that the best way to achieve these goals and turn them into a reality for all our citizens is not just with new government programs, more spending and additional debt,” according to the statement.

“These approaches to problem-solving oversimplify the core underlying issues driving the need for state government intervention and they ignore the significant investments that are already being made by taxpayers.”

Wolf used the budget to renew his call to close what he calls gaps in pipeline regulation that “tie the hands of the executive and independent agencies.”

“This proposed rulemaking should enhance pipeline safety in Pennsylvania and move forward expeditiously,” Wolf said in a statement. “Significant improvements to hazardous liquid public utility safety standards can be accomplished regulatorily by building upon the federal pipeline safety laws.”

The pipeline proposals include granting the Public Utility Commission authority to regulate locations of intrastate lines. No state agency has that authority. The Federal Energy Regulatory Commission (FERC) oversees interstate pipeline siting, but the lack of authority within the state has fueled opposition to lines like Energy Transfer’s cross-state Mariner East project. Mariner East 1, 2 and 2x carry or will carry natural gas liquids from western Pa. to an export terminal near Philadelphia.

“I was heartened to hear the governor address the need for stronger laws to ensure pipeline public and environmental safety,” Dinniman said in a statement. “Many of the points he made echoed what I and others have been calling for over the past six years here in Chester County and Harrisburg.”

Wolf urged lawmakers to enact measures that require emergency response plans for schools and childcare centers that are within 1,000 feet of a pipeline; five-day advanced notice to residents and municipalities of any pipeline construction; and PUC-generated setbacks for residential neighborhoods, education facilities and hospitals.

“And by joining the Regional Greenhouse Gas Initiative, we can raise hundreds of millions of dollars in auction proceeds to make our air cleaner and our transit systems stronger so that Pennsylvanians can get to the jobs businesses are creating,” he said.

Wolf signed an executive order in October directing DEP to draft regulations on joining RGGI. The program puts a price on power plant carbon emissions, which are then traded at auction. Some lawmakers have opposed the effort.

Correction: The original version of this story incorrectly named the chair of the state Republican party and used comments made about last year’s budget proposal. The story has been updated with comment from Pennsylvania House Republican leaders.