A small western Pa. community reveals how natural gas drilling can fracture political alliances on both sides of the aisle 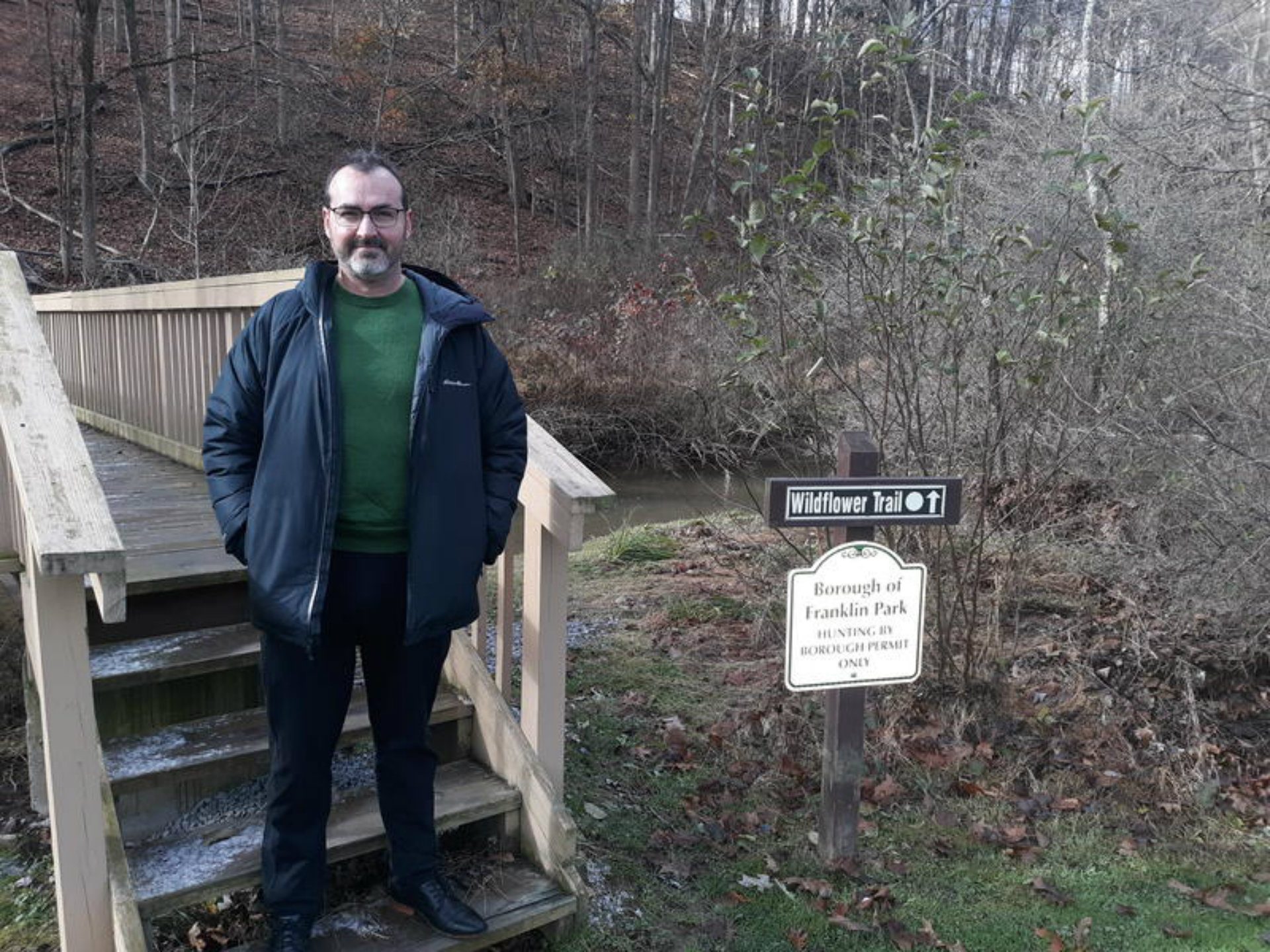 Franklin Park is both rustic and upscale, graced with million-dollar homes, state game lands and even the occasional large flightless bird. And as Matt Ferriolo drives through the community touting its virtues — “People really, really care about keeping the forested nature of this place,” he says at one point — an ostrich trots down the driveway of a nearby farm.

Democrats like Ferriolo might seem to be a different kind of rare bird in this suburb, perched on the western edge of Allegheny County. The area is solidly Republican — GOP voters outnumber Dems by 1.3 to 1 — and it’s hard for people to remember the last time a Democrat won a seat here.

That changed this November, when Ferriolo and three other Democrats campaigned for seats on the borough council and went three-for-four. The galvanizing issue: concern over fracking beneath the borough’s 80-acre Linbrook Park.

The issue came to the fore nearly a year ago, after PennEnergy offered to drill for natural gas beneath the park from a well site situated in Economy Borough just next door.

The gas industry says drilling is safe and environmentally friendly, the borough stood to earn nearly $300,000 in royalties, and some residents hoped to execute leases on their property as well.

But walking up from Big Sewickley Creek to the park’s playing fields, Ferriolo says he and others worried that more than just the park was at stake. “It would be a referendum on drilling in an area that is beautiful. It would affect our health, it would affect the whole reason why people live here.”

And so he recruited himself and three other Democrats to challenge members of the council. Even as council began backing away from the proposal, he and his allies carried out an intensive door-knocking campaign. And while Ferriolo narrowly lost his own bid, his three peers were successful.

That’s a notable result, given that when fracking makes political headlines, it’s often for the problems it causes Democrats. As Democratic presidential contenders vie for a chance to take on President Donald Trump next year, the issue looms especially large in western Pennsylvania.

“It’s a place that Trump won, it’s been Republican for a long time,” said Megan McDonough, an activist with Food & Water Action. “And fracking is the issue that cut it the other way.”

‘We drink the same water’

To be sure, the issue can be difficult for Democrats to navigate, since fracking often divides two key elements of the party’s base. Many environmentalists worry about drilling’s impact on air and water quality. But a massive ethane cracker plant that will use shale gas is being built in Beaver County and employs union members.

State Rep. Sara Innamorato is among a handful of progressives who have successfully challenged old-guard Democratic incumbents in Allegheny County, and she did it while calling for a moratorium on fracking. She now represents a district that covers parts of Pittsburgh and northern suburbs like Etna, an Allegheny River town whose environmental policies won it distinction as an “EcoDistrict.”

“When you see that kind of energy and dollars put into a cleaner environment, and you know that all that effort will be wiped out with the expansion of an industry that is completely out of local control, I feel like it’s my duty to advocate so that their work [is] protected,” Innamorato said.

At the same time, she added, her district also includes “a lot of people that are employed by that industry. And right now it’s a labor-versus-environmental conversation, instead of how do we have both?”

Pittsburgh Mayor Bill Peduto stepped onto that fault line and nearly fell through it this fall, when he told an environmental conference that he opposed more investment by the petrochemical industry. Republicans pounced. At a political event held in Downtown Pittsburgh’s Omni William Penn Hotel, Republican Committee of Allegheny County chairman Sam DeMarco told party faithful that Peduto “wants to halt growth. He sounds like Pol Pot declaring year zero in Cambodia. Tonight I’m telling union workers that we’re on their side.”

Shortly after Peduto took his position, Darrin Kelly, southwestern Pennsylvania’s top union official, issued a statement saying it was “hard to believe that the Mayor of Pittsburgh would actually tell companies not to create thousands of good middle-class jobs in our region.  … Calling to banish an entire industry is an insult to a lot of hard-working men and women in organized labor.”

Weeks later, Kelly seemed ready to move past the outrage. “The mayor is very passionate about what he believes,” he said. “We did have a lengthy conversation. It’s got everyone back to the table.”

Kelly said he favors an ongoing dialogue between labor and environmentalists, modeled on a “Blue Green Alliance” advanced by the United Steelworkers.

“We can’t have this type of fighting,” he said. “We all have to sit down on this.” Union members who depend on the industry “are fighting for our homes, just like any resident,” but “we drink the same water.”

Kelly scoffed at Republican efforts to score points with his members over the issue: “It takes a hell of a lot more than agreeing with us on the natural gas industry to say that you’re a friend of organized labor,” he said. But as for Peduto’s statement, “I think it gave [Republicans] a platform, and that’s what I don’t like.”

‘Trading their lives for their jobs’

That’s also a concern for Allegheny County Executive Rich Fitzgerald, a Democrat who supports drilling. Fitzgerald acknowledges there are “subtleties” involved in the politics of fracking, and that suburban voters in places like Franklin Park may not want wells in the neighborhood. But even there, he says, many do support the lower gas prices and jobs fracking brings. And Fitzgerald worries a drilling ban — which Democrat presidential hopefuls including Bernie Sanders and Elizabeth Warren support — could cost Democrats in swing states like Pennsylvania.

“I think an extreme position on that issue I think really puts those states in jeopardy,” Fitzgerald said. “Once you draw a line and say you’re going to ban it, there’s nowhere to go from there. You’re taking away from western Pennsylvania what has been a tremendous growth opportunity.”

The issue is already shaping the presidential campaign here. U.S. Senator Pat Toomey pointedly visited Pittsburgh to promote a resolution that expresses disapproval for any president who might try to ban fracking — though legislation would be non-binding.

Such moves aren’t happening in a vacuum. A recent poll by the Kaiser Family Foundation found that 57 percent of Pennsylvania swing voters think a ban on fracking is a bad idea. Opposition is even stronger around Pittsburgh. But 14 percent of those polled also said that climate was a top issue — well behind such evergreen concerns as health care and the economy, but ahead of immigration and taxes.

“While we have majorities of Pennsylvania voters saying that a ban on fracking is a bad idea, very few of them say that if a candidate disagreed with them on this issue, that there would be no chance that they would vote for them,” she said.

In fact several local candidates — from county councilors like Bethany Hallam to state representatives like Innamorato and Summer Lee — won elections while expressing doubts about fracking. Activist Megan McDonough has helped local municipalities limit drilling, and says the outcome in Franklin Park could be a portent of things to come. She notes that fracking has been an issue both for affluent suburbanites and for working-class communities of color in the Monongahela Valley, where Lee has channeled concern about a proposal to frack beneath the Edgar Thomson Plant in Braddock.

Ferriolo says he’s going to continue to do his part in Franklin Park — and beyond. He says there are efforts underway to work collaboratively on zoning with other nearby municipalities.

But the gas industry is dug in deep: Atop a winding road is the PennEnergy well site whose construction helped galvanize his movement. On recent visit he was surprised to see that trees had been knocked down, and earth-moving equipment was already reshaping the land.

Ferriolo sighs and says, “They’ve done all this work in just the last few months” — while he was campaigning.

But he has few other regrets about the fight. “What we felt was that we were on the right side of history,” he said, “and that we wanted to protect this place.”

After the Murray Energy bankruptcy, what's the future of coal?