Trash still pokes through at the superfund site in Eastwick in September 2019.

Earl Wilson fought for two decades to hear the rumble of excavators and bulldozers in his Eastwick backyard.

“I’m elated, delighted,” said Wilson on a recent afternoon, watching the diggers as they moved across a flat expanse of brown soil, removing decomposing trash from the ground.

Wilson settled in Eastwick in the 1980s. He had no idea that he was buying a home next to the former Clearview Landfill, a toxin-laced dump. He didn’t discover that for certain until 2001, when the U.S. Environmental Protection Agency declared one of the nation’s most contaminated Superfund sites in need of a massive cleanup.

It’s taken 18 years of neighborhood organizing, legal battles and EPA investigation to get the trash out. But by the end of the year, the landfill’s 55 acres of contaminated soil will be contained and covered, EPA officials say. While the full $76 million remediation won’t be completed for another four years, new trees and grass are already growing. A small part of a park will reopen for the public in the late fall.

“People were saying: ‘Nothing is going to happen.’ You know? I mean, for years they just did not believe that this thing was going to happen,” said Wilson, president of Eastwick Friends and Neighbors Coalition. “One of the things that we said was ‘Just wait until the big tractors and trucks start rolling in.’”

Why it took so long for the construction crews to arrive, and how Wilson ended up living next to a landfill are questions with implications about Philadelphia’s past and its future, especially as the city moves forward with an ambitious redevelopment of the neighborhood that city officials hope will rebuild trust and heal the scars of the past. 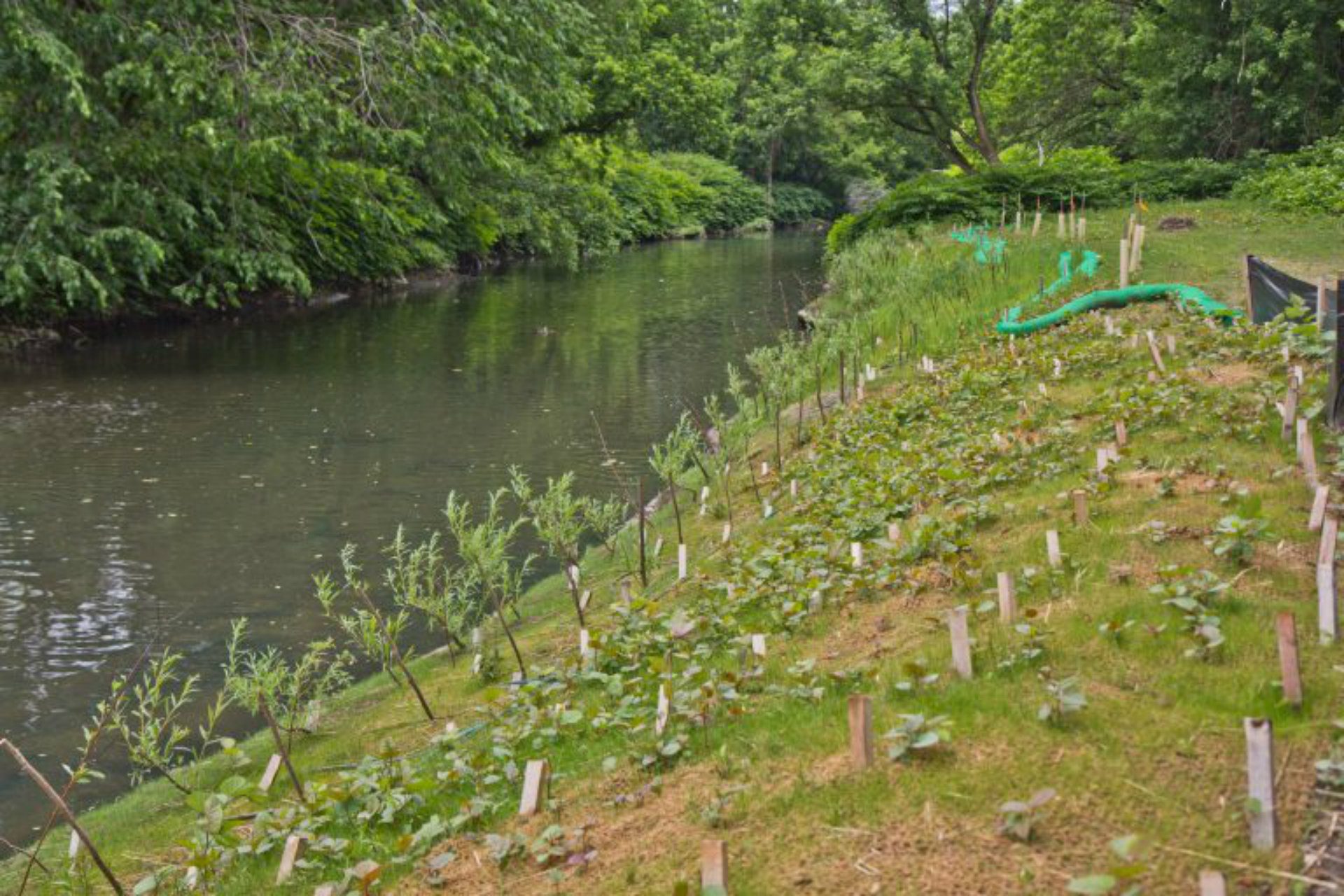 Poplar branches transported from the EPA’s nearby nurses will grow quickly and help absorb rain water.

A ‘city within a city’ on toxic ground

Clearview Landfill operated on the marshy land alongside the Darby Creek between the 1950s and the ‘70s, accepting municipal, demolition and hospital waste. But before the dump opened, people lived in Eastwick, scattered among houses and farms, surrounded by wetlands. According to older resident’s recollections, the area was racially integrated, unlike most of the city’s neighborhoods. Despite the people living there, city officials considered the area underutilized and designated it as “blighted,” partly because of the existence of junkyards and dumps like Clearview.

In the 1950s, the Philadelphia Redevelopment Authority began to dream up a new plan for the area. Under the leadership of influential city planner Ed Bacon, the PRA reimagined the low-lying area as a “city within a city” where tens of thousands of aspiring working and middle-class families could find affordable homes and a leafy yard.

Despite opposition, City Council approved the plan in 1958. The PRA acquired almost 5,800 properties across 2,300 acres, some through eminent domain. More than 8,000 residents were displaced.

The “new Eastwick” was the largest urban renewal area in the United States, and it would have provided a community for 45,000 people, full of housing, schools, parks, commercial and industrial areas. Before the landfill even closed, Philadelphia began working toward this vision, putting a bucolic park there and allowing developers to build homes within its boundaries.

But building on top of a marsh proved to be challenging. Fifteen million cubic yards of fill that were added and contaminated material from the landfill got dispersed into the neighborhood, according to the EPA. Finally, the developer with whom the city signed a contract with —  the New Eastwick Corporation, later known as Korman Company — halted construction on the $78 million project in the mid-70s.

One hundred and twenty eight acres of the project remained undeveloped. That chunk of empty land is the focus of the city’s current Eastwick redevelopment project, this one attempting to build a “village in the city.”

In the end, only about 4,200 housing units of 12,500 originally projected were constructed. Some were built over soil and groundwater containing elevated levels of hazardous substances such as polychlorinated biphenyls (PCBs), polycyclic aromatic hydrocarbons (PAHs) and other toxins such as lead, mercury, pesticides and arsenic, according to the EPA.

“You put your roots down thinking that you are living in a very viable place,” said Wilson, who is now a member of a community advisory group set up by the EPA. “You got a driveway and nice green trees all around you —  and then as you begin to find out more about what’s going on, then you say to yourself, ‘Wow.’” 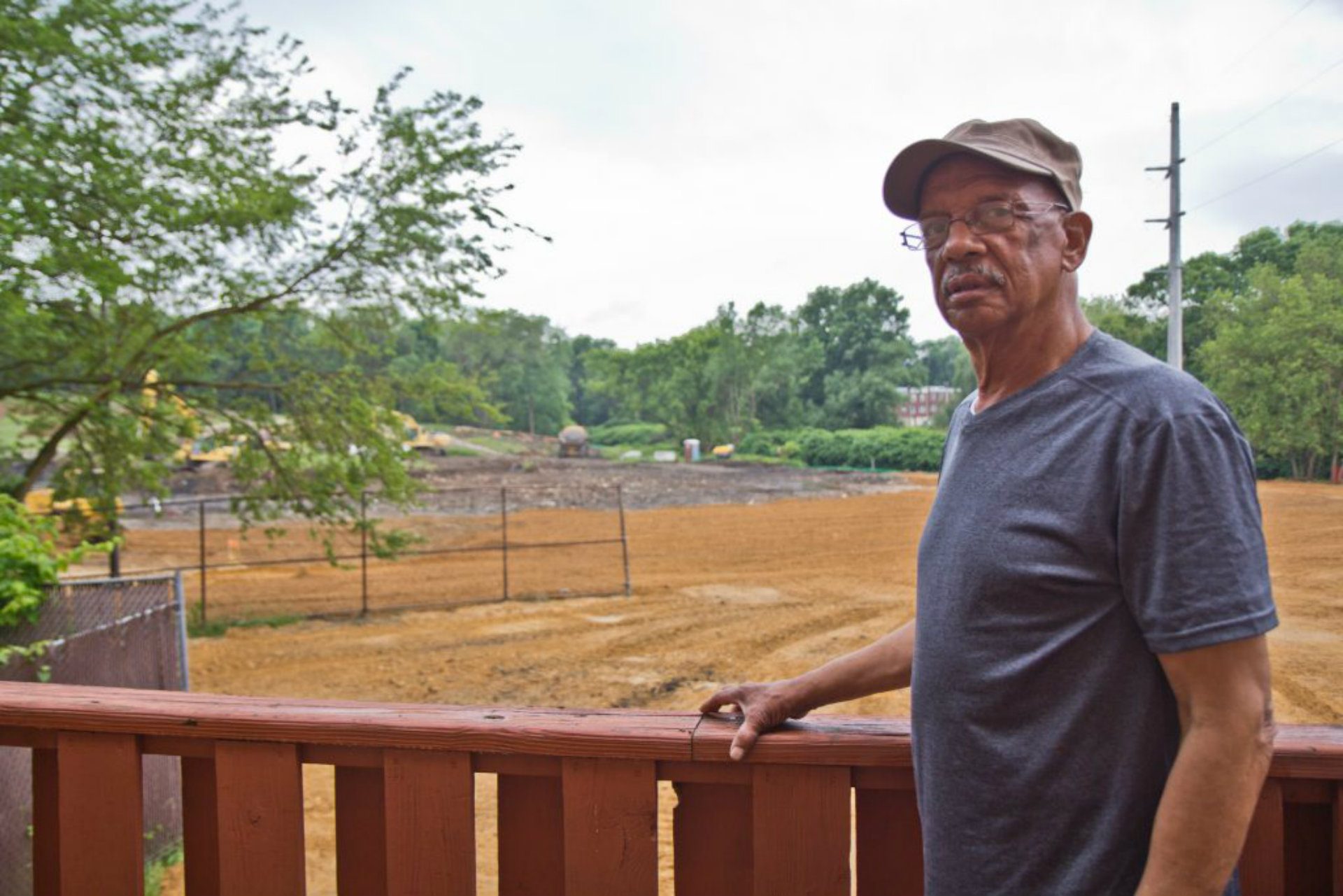 Leo Brundage, an “old Eastwick” native, returned to the neighborhood in the 1980s. His house is right next to the city park on Saturn Place. He used to play ball there, and have picnics with his family.

“Yea, I loved it here. Matter of fact, I took my young daughters up on the hill just to look down, look at the rooftops,” Brundage said as he watched the loading trucks going up and down the hill on a recent day. “It was just nice, nice sighting.”

Except that hill was actually the landfill.

Rashes and illnesses tipped off residents

In 1985, 81 homeowners and renters filed a suit against the city and Korman in the Common Pleas Court. Residents alleged both the PRA and the developer knew their houses were built next to the landfill but “…they never told prospective buyers that the large grassy hill was really the edge of a dump,” the homeowner’s attorney told The Philadelphia Inquirer.

Residents said both their health and their property value were at stake and asked for $30,000 to $60,000 in compensation. Korman told the newspaper the accusations were “totally unfounded.” The suit was later settled out of court and “the issue dropped from sight,” according to an Inquirer story.

But Brundage says people started to get rashes and different illnesses after Hurricane Floyd flooded their basements in 1999 and more neighbors organized. They learned that the Clearview Landfill, which expands into Darby Township, was closed by court in 1976 after receiving more than 190 violations by the state environmental regulator between 1970 and 1973.The EPA had done previous testings in the area, but did not find evidence of human threats.

“When we found out we were very upset,” Brundage said.

Residents formed a committee and asked for relocation. The city denied it. They went to Harrisburg to pressure elected officials and finally, in 2001, got the EPA to add the Lower Darby Creek Area — which includes a second landfill, the Folcroft Landfill, located inside the John Heinz National Wildlife Refuge —  to the federal government’s list of the nation’s most polluted Superfund sites. There are some 40,000 Superfund sites in the U.S. but only 1,600 on the National Priorities List and one of them is Lower Darby Creek.

Elizabeth Reid, now 86, bought property on Buist Street in 1980. Although she was one of the 75 homeowners in the 1985 class-action suit against the city, she said it was a big shock to have the authorities confirm that the hill, the park, and her own yard were highly polluted.

“Everybody around me was dying, including my husband [who] ended up with brain cancer. My neighbor, her husband died. And two people in this block died, you know, cancer, and across the street my neighbor… everybody who died, it was cancer.” 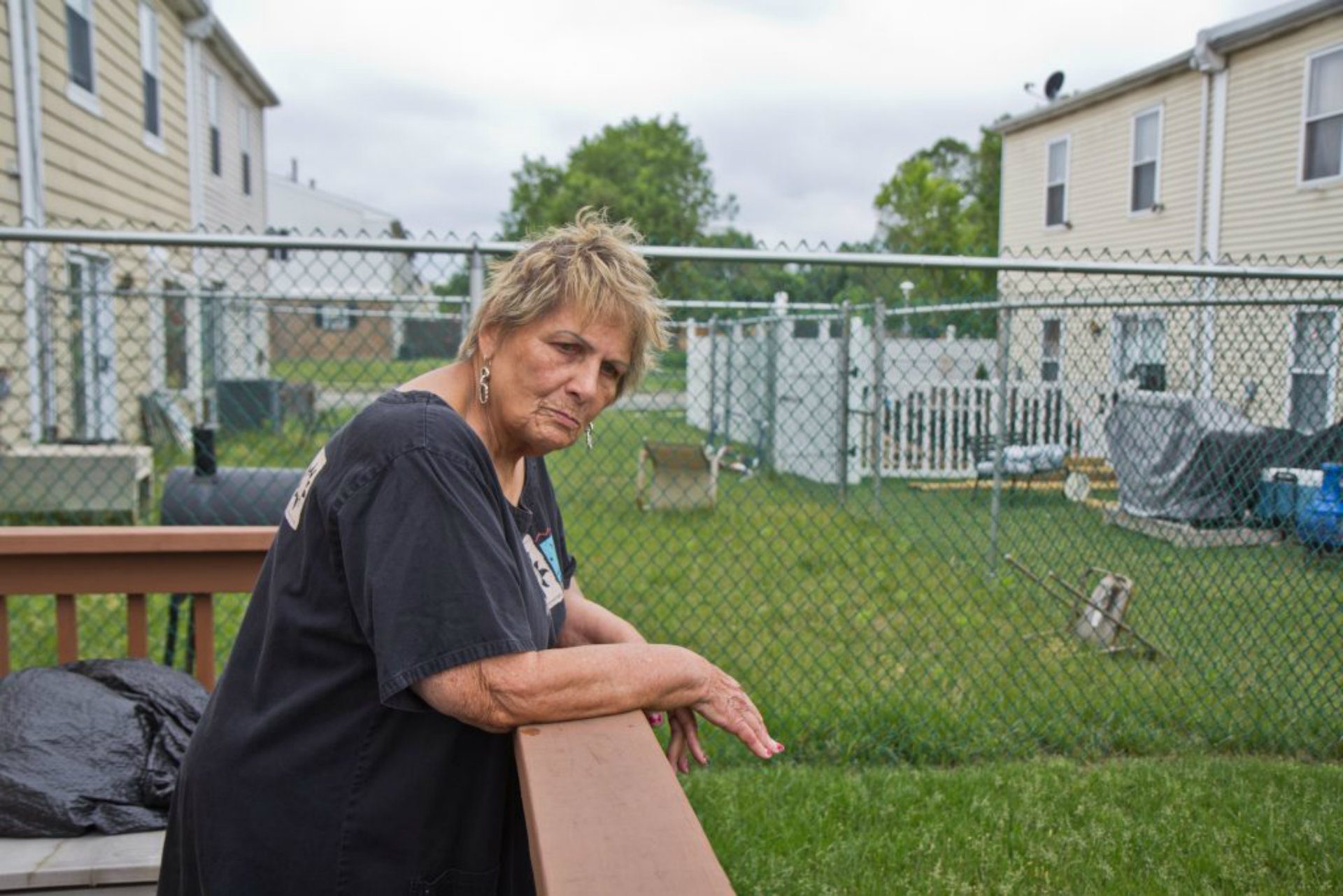 Based on residents’ concerns, in 2012, the EPA commissioned a cancer incidence analysis to the Pennsylvania Department of Health. According to its results, Eastwick residents had high rates of cancer compared to nationwide data, but similar rates to other neighborhoods in the city.

But Josh Barber, the Superfund site’s project manager for the last 10 years, said it’s hard to know how much the landfill has contributed to residents’ health issues. Cancer is caused by multiple factors, he said. And sick residents may have left the neighborhood by the time the study was done.

“One of the reasons why we’re doing this is because there was an unacceptable potential risk of cancer based upon the levels of contaminants that were in the soil [if contact was made on a daily basis],” Barber said.

The EPA’s investigation determined that 33 houses built next to the dump had critical levels of PAHs. In 2017, the agency removed and replaced the soil from the front and back yards of those homes. Since then, the agency has removed and replaced soil contaminated with lead and PCBs from approximately 150 more homes. Construction of the main remediation plan, with an estimated cost of $76.2 million, started this summer. In June, the federal agency suit calls Philadelphia and the Redevelopment Authority a potentially responsible party. The city agreed to pay $8.4 million toward the cleanup.

Even though according to the city statement’s the site no longer poses a “significant immediate risk to public health,” the area is still not safe. And although the most dangerous contaminants were removed from the site — almost 4,000 tons of PCBs in 2012 and contaminated soils from people’s yards — the main cleanup of the site started earlier this year.

Over the summer, workers were removing two feet of contaminated soil and piling it on top of the hill. Progressively, by the end of the year, everything will be covered with a 55-acres cap, to isolate the pollutants.

But instead of using a more traditional plastic liner, the plan is to jump-start a forest. Multiple layers of soil, shrubs and trees such as cottonwoods, willows, aspens, and sycamores will act as a sponge to prevent water from coming in and toxic substances from seeping out. An on-site nursery will provide some of the more than 55,000 plantings the project will require. The technical term for the forest cap is an evapotranspiration cover.

“That saves on cost, but it also provides a more resilient remedy because overtime those liners break down. But you imagine the trees and the rooting material are only going to get stronger and more effective over time,” Barber said.

The creek’s streambanks will be reinforced in a similar way — with layers of soil wrapped in coconut matting, attached to the soil, with trees and shrubs planted on top — to prevent erosion. 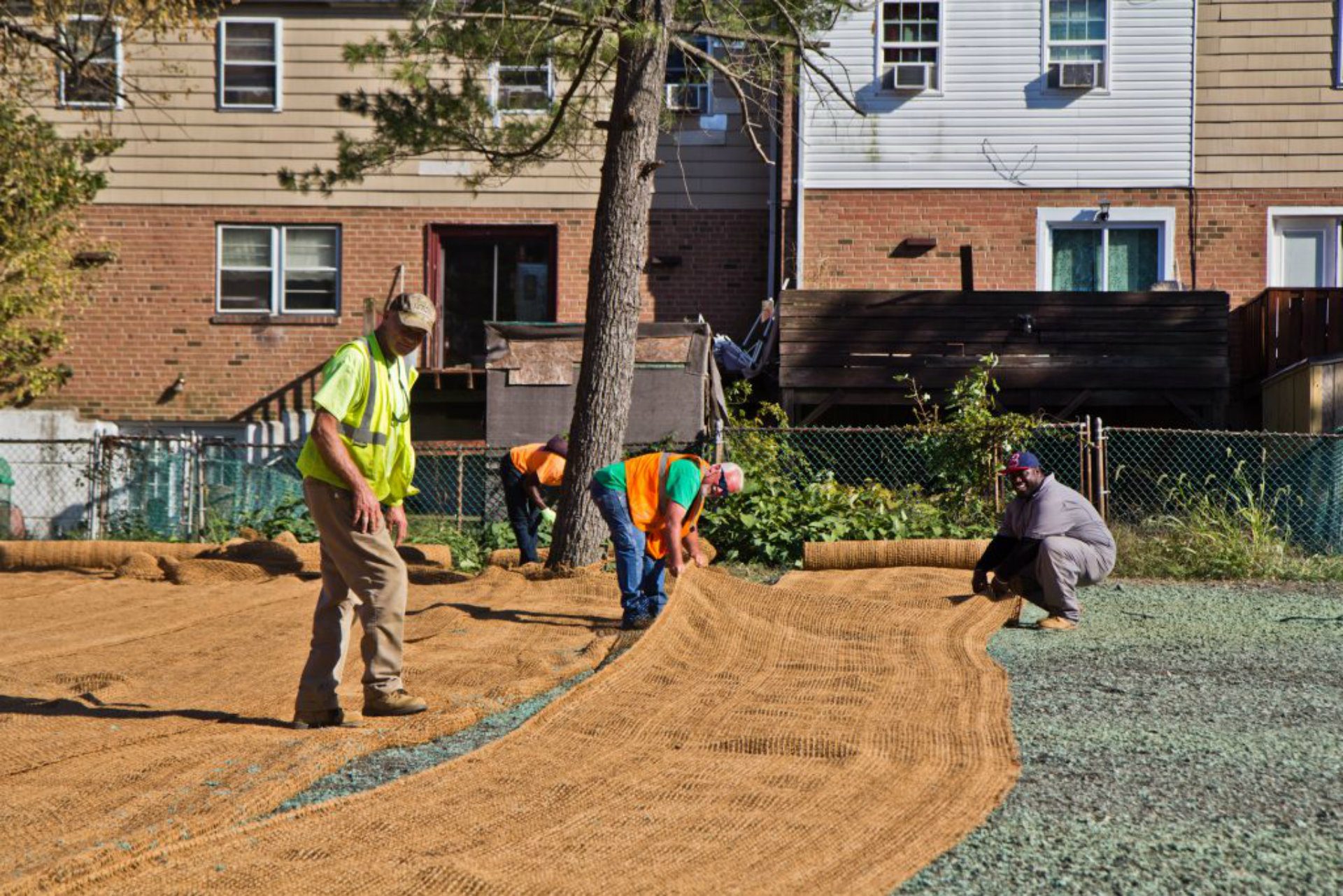 Workers lay coir matting, which is made of coconut fiber that will break down in 2-3 years, but protect hydro seed from water erosion.

Barber says the remediation plan considered the floodplain, not to make flooding in the neighborhood worse, and climate change impacts, such as stronger precipitations and sea level rise.

“And we will always be here to monitor the effectiveness of what’s going on and make sure that we’re protective,” Barber said.

The end result will be a clean park. The city plans to build a trail, part of the East Coast Greenway, which connects 450 cities from Maine to Florida.

The park is one of many new amenities slated for the long-neglected Southwest neighborhood. In the coming year, more surveying and listening will be done by the PRA and its consultants as they too move forward with redevelopment.

For residents like Wilson the progress means restored property values. But also a sense of pride after a long process of working to be heard.

“We no longer have an open sore in the community. We have done something about it,” he said.