‘You have no choice but to care:’ In coal-centric W.Va., climate change discussion starting to grow | StateImpact Pennsylvania Skip Navigation

The beltline at the 4 West Mine sent coal to the Longview Power plant in Maidsville, West Virginia.

‘You have no choice but to care:’ In coal-centric W.Va., climate change discussion starting to grow 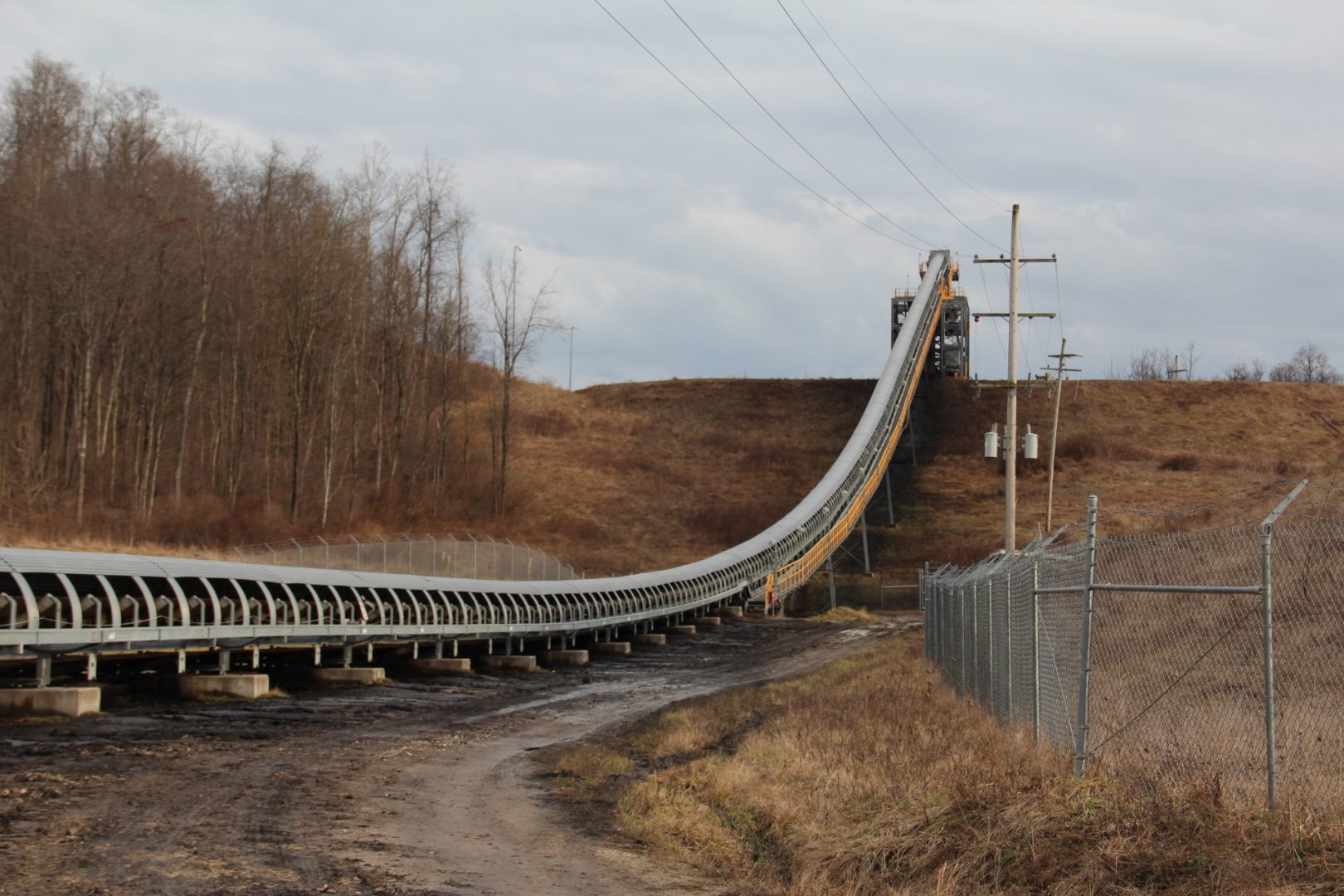 The beltline at the 4 West Mine sent coal to the Longview Power plant in Maidsville, West Virginia.

This story originally appeared in the Charleston (W.Va.) Gazette-Mail. It is republished here as part of StateImpact Pennsylvania’s partnership with Covering Climate Now, a global collaboration of more than 250 news outlets to strengthen coverage of the climate story.

It started at a puppet show.

At some point in the late 1980s, Tom Rodd found himself at a performance about James Hansen, one of the earliest top climate scientists at NASA. In 1988, Hansen warned a Senate committee the greenhouse effect was changing the climate, and a warming planet was imminent.

In the audience, Rodd watched as Hansen’s character talked about how burning fossil fuels increased greenhouse gases, causing climate change. Everything clicked for Rodd, who began to see how grim the situation really was.

“It’s kind of like a cancer diagnosis, ‘Oh my god, this is a big problem that I had no knowledge of before,’ ” Rodd, who spent his career practicing environmental law and fighting coal companies over water pollution, said this summer from his office in Thomas.

Founded in 2000, Rodd’s nonprofit, Friends of Blackwater, has led the charge to shine a light on climate change in a state historically dominated by coal — and now, natural gas. And the message is spreading — and starting to make a small break into the political mainstream.

Later this month, legislative interims will include a major discussion about climate change, co-hosted by House Speaker Roger Hanshaw, R-Clay. Hanshaw, who has close connections to the state’s natural gas industry, is also a lawyer and holds a doctorate in chemistry from Notre Dame.

“That would be the definition of turning a corner in West Virginia, as far as talking about climate change,” said Logan Thorne, project director for the West Virginia Center on Climate Change, a recently formed arm of Friends of Blackwater. “I respect Hanshaw a lot for saying, ‘I’m going to do this publicly with children and show them I’m going to talk about this in public forum.’ ”

If that’s not enough, later this fall, a legislative committee will do the practically unthinkable: Hold a hearing about the potential for growth of renewable energy in West Virginia.

“It’s not a matter of, ‘Do you care about this or do you believe in that?’ You can look at photos of polar bears being decimated and live in West Virginia and say, ‘I don’t care,” Thorne said. “But if you’re living in West Virginia dealing with floods or food scarcity, you have no choice but to care.”

‘Can we tell the story so people get it?’

Across the planet, climate change has become a dominant and serious threat to communities, health and the environment. Next week, the world’s top leaders will convene at the 2019 Climate Action Summit to fight what’s considered the biggest issue of our time.

This story is part of the Charleston Gazette-Mail’s contribution to Covering Climate Now, a global collaboration of more than 250 news outlets to strengthen coverage of the climate crisis. This week, print publications, TV and radio stations, and institutions around the world are shining a light on an issue the initiative’s founders say has been historically underplayed.

“The point is to give the climate story the attention and prominence that scientists have long said it demands so that the public and policymakers can make wise choices. Can we, in other words, tell the story so people get it?” Mark Hertsgaard and Kyle Pope, environment correspondent for The Nation and editor and publisher of the Columbia Journalism Review, respectively, wrote in an article for CJR.

Exacerbated by the burning of greenhouse gases, the climate is changing quickly and contributing to extreme weather events — flooding and drought, among other things — all around the world. Average temperatures have increased by 1.8 degrees Fahrenheit across the country since the beginning of the 20th century, says the Fourth National Climate Change Assessment published last year. And unless humans cut down on greenhouse gas emissions, the global average temperature could jump 9 degrees more by the end of the century, the report says.

“The impacts of global climate change are already being felt in the United States and are projected to intensify in the future — but the severity of future impacts will depend largely on actions taken to reduce greenhouse gas emissions and to adapt to the changes that will occur,” the report says.

‘There are people in Charleston who care’

When the West Virginia legislature returns for interim meetings at the end of the month, Delegate Evan Hansen, D-Monongalia, and Hanshaw will lead an unprecedented conversation with students across the state.

On Sept. 24, science teachers will video conference into the state Capitol, where Hansen, an environmental scientist, and Hanshaw will answer students’ questions.

“A lot of kids are frustrated with grown-ups and see climate change as one of the most important issues in the world, but don’t see us doing much about it,” Hansen, who has degrees in computer science and engineering from MIT, and in energy and resources from the University of California, Berkeley, said. “So I wanted to show kids there are people in Charleston who care about the issue and are trying to do something.”

That’s a big step for a legislature often focused on natural gas and coal, and usually, legislation that would benefit those powerful industries, Thorne said. Historically, legislators have shied away from a discussion about the environmental impacts of coal and natural gas, instead focusing on job creation.

“It’s a very difficult issue to work on here in West Virginia because so much of the fossil fuel industry is part of the economy,” Rodd said.

Since he took office last year, Hansen (no relation to James Hansen), has used the words “climate change” on the House floor a number of times.

This summer, he brought it up when the House was considering a $12.5 million tax break for a coal-fired power plant in Pleasants County. Delegate S. Marshall Wilson, R-Berkeley, retorted that it was “mythological pseudo-science of man-made climate change” and urged the Legislature to “continue to use the coal that God has blessed this state with.”

“I think we’re starting from scratch as far as having a conversation about change in West Virginia … and also the beginning of a conversation of what we can do to take advantage of these job opportunities coming along related to renewables,” Hansen said.

Hansen is an environmental consultant for Downstream Strategies, an environmental and economic development consulting firm in Morgantown that’s worked on analysis and reports on climate change and energy development. Hansen has also spoken at Friends of Blackwater conferences at West Virginia University.

Last session, he introduced a bill to site solar projects on formerly mined land. The bill never made it to the House floor.

According to the Solar Foundation’s Solar Jobs Census, which tracks employment across the country, 341 people had jobs in installation, operations and manufacturing solar energy in West Virginia in 2018. Ohio had about 7,100 and Kentucky had 1,410. Virginia had 3,890.

“These are real jobs employing people,” Hansen said. “We need to be attracting those jobs.”

In Thomas, Rodd’s nonprofit, Friends of Blackwater, has been working on conservation and environmental issues specifically in the Mid-Allegheny Highlands. Recently, Friends of Blackwater created the West Virginia Center on Climate Change — an arm of the nonprofit that addresses climate issues all over the state.

Recently, the group hosted a daylong conference focused around the public health impact of climate change. Experts from the country’s top institutions, including Duke and Georgetown universities, were scheduled to present on topics ranging from climate change’s impacts on water security to mental health.

Last year, the group focused mostly on communicating the issue, with different seminars on methane emissions and solar energy.

“This year we wanted a more laser focus on an issue that is really going to affect people firsthand, whether they care about climate change or not,” Thorne said.

The issue touches on myriad aspects of public health — the quality and quantity of water, severe flooding and droughts, forced migration, overpopulation — “all of these issues that tie into climate change and public health,” Thorne said.

“We’re just trying to find different avenues to reach out to people and widen that circle of climate change. It’s been dominated by the fossil fuel industry and a lot of misinformation throughout the years and I’m sympathetic to it,” Thorne said. “The challenge is to widen that circle to people who’ve been completely turned off.”

A 'philosopher of science' on climate change deniers: 'People can actually change their mind based on facts'