Into the bog: Scientists are trying to learn more about unique peatland ecosystems

The ecosystems are vulnerable to development and climate change 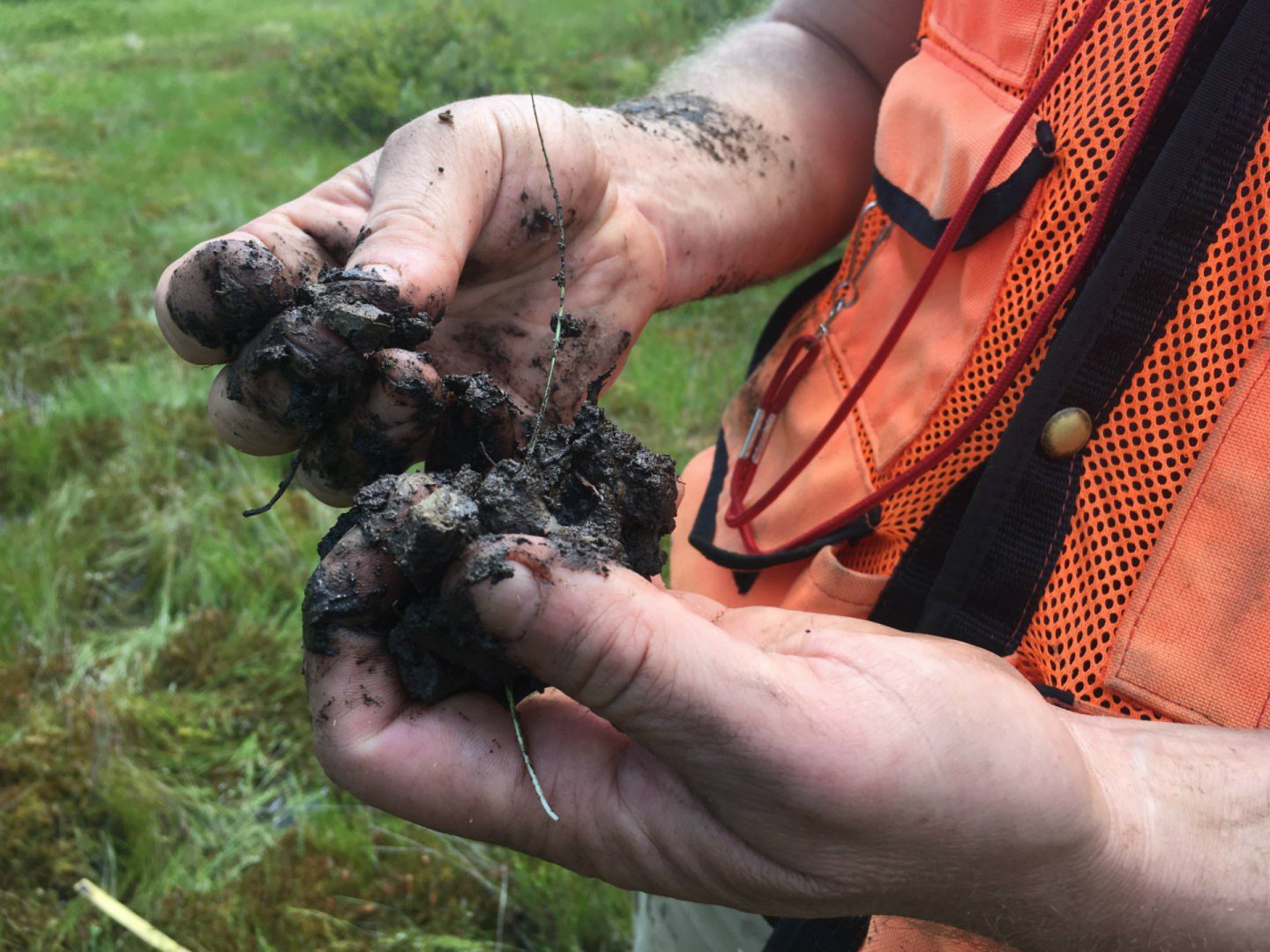 When I meet up with a group of scientists in the parking lot of Laurel Summit State Park, in southwestern Pennsylvania, there are clues about where we’re headed. 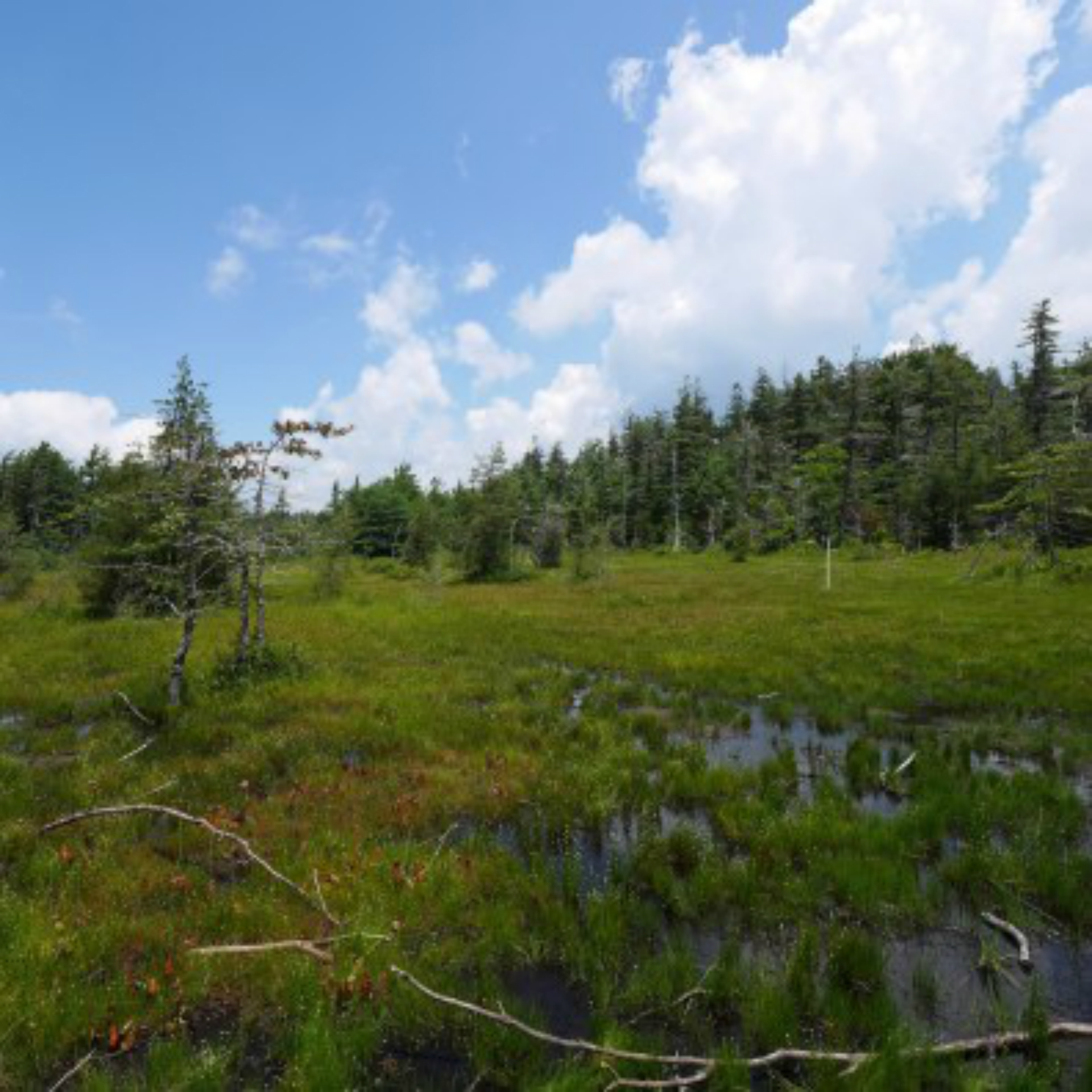 Conifers ring the outside of the wetland.

“I always go with a hiking pole, which is especially good for wetlands, and testing out how deep the water is where you might sink in,” advises David Yeany, an ornithologist with the Western Pennsylvania Conservancy. His colleague, Mary Ann Furedi pulls equipment from the back of her vehicle, and suits up.

“Everyone else is going with knee boots. I didn’t bring mine, so I’m going to go with chest waders,” she says.

Furedi is an ecologist with the conservancy, and the monitoring and assessment manager for an effort to study 30 peatland sites in Pennsylvania. Peat is partially decomposed plant, and sometimes, animal material.

Pennsylvania is home to a number of peatlands, which are mostly in the northeast and northwestern part of the state. But it’s just a short walk along a gravel trail here to see one.

These unique ecosystems are vulnerable to development and climate change, and these conservationists are trying to learn more about them.

Ephraim Zimmerman is also gathering up gear, including a compass and water monitoring equipment. He is a plant community ecologist, and, like his colleagues, part of the Pennsylvania Natural Heritage Program, which looks at rare species and habitat in the state. 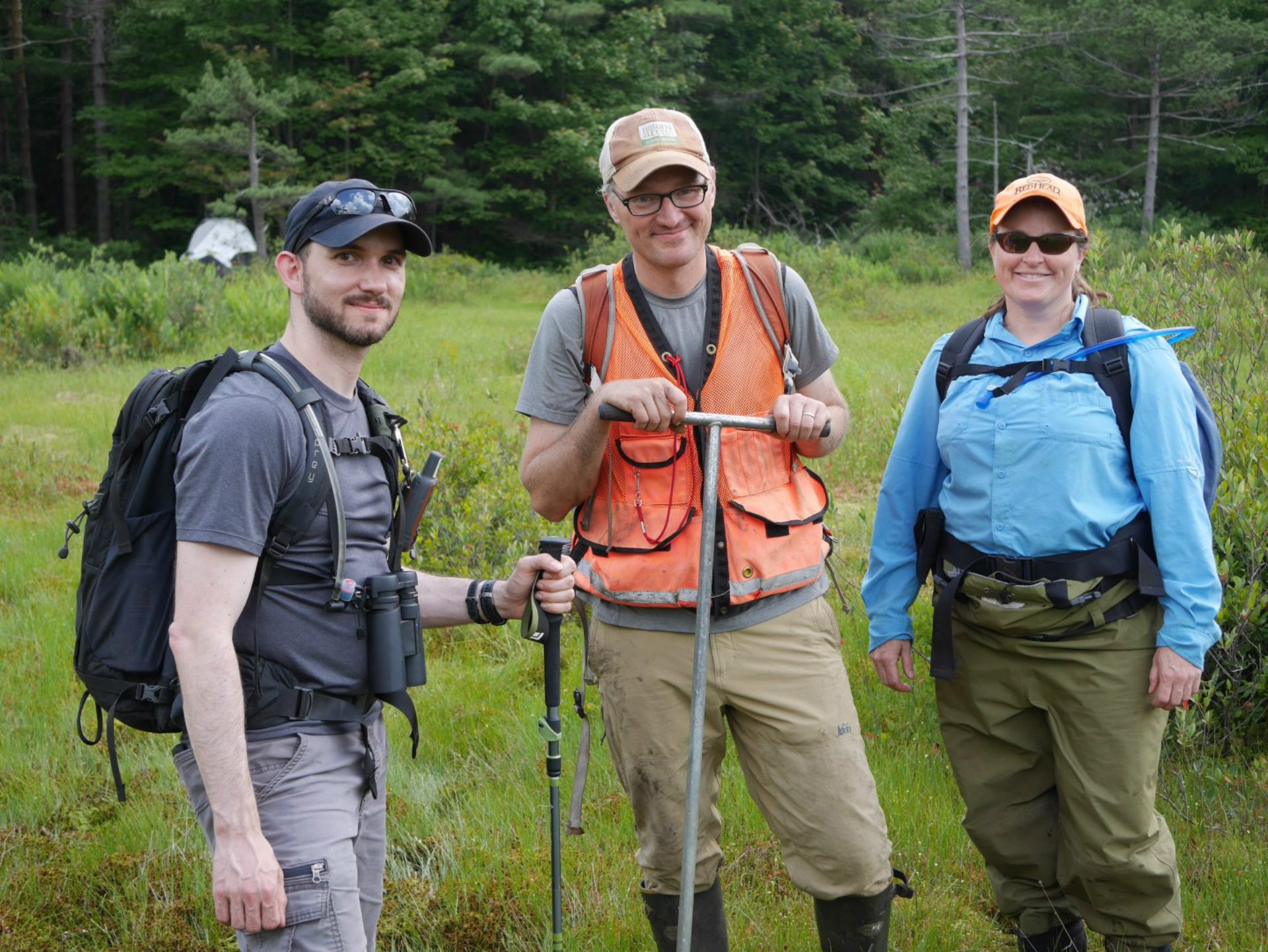 “This is a red oak, mixed hardwood forest that’s up at the top of this ridge,” Zimmerman says.

This spot is about 2,700 feet above sea level, which is pretty high for the Laurel Highlands. Along the trail we see rhododendron bushes, pink mountain laurel and a lot of thigh-high ferns. Then the forest shade opens up into a sunny wetland.

“This is the more graminoid-dominated wetland, or grass-dominated,” Furedi says. She points out some chokeberry bushes growing low to the wet ground.

A small boardwalk has been built here so that visitors can get a closer look at the flora, like carnivorous pitcher plants, which are blooming now with tall, purple flowers. They look like upside down umbrellas. A few species of dragonflies zoom around.

“Spruce Flats Bog is the name of this locality, but there are no spruce here,” Zimmerman explains. 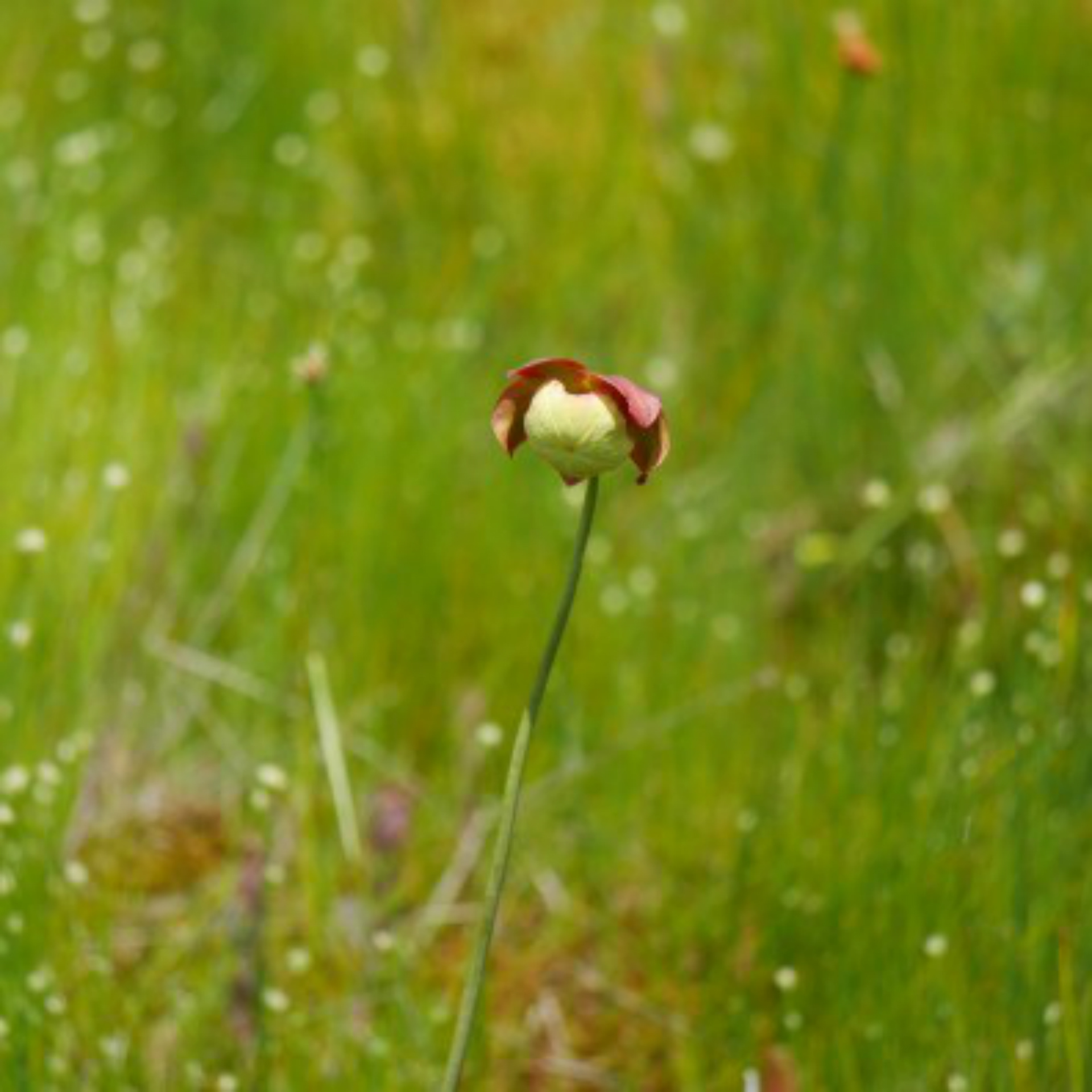 The flower of the carnivorous pitcher plant.

Apparently, the frontier people and workers who logged this area a hundred years ago called any conifer tree a spruce. They removed a lot of the pine and hemlock, too.

“So, here in the wetland is one of the only places where there’s still the conifer component,” Zimmerman says.

Conifers are trees that produce cones. Taller, windswept ones line the perimeter, and spindly, little evergreens dot the interior, like islands. Some of the stumps from the old, logged trees create another feature of this landscape: hummocks.

“These hummocks themselves might only be a foot high, but in that small elevation change you have these moisture differences, and so you could have four, or five or six different species of moss growing there,” Furedi says.

Mosses are bryophytes, and it’s one type of plant they’re monitoring. Sphagnum moss is by far the most common here.

“It almost looks like a green shag rug from the 70s,” Furedi says. “I like to call it nature’s sponge, because it can just hold a tremendous amount of water.” 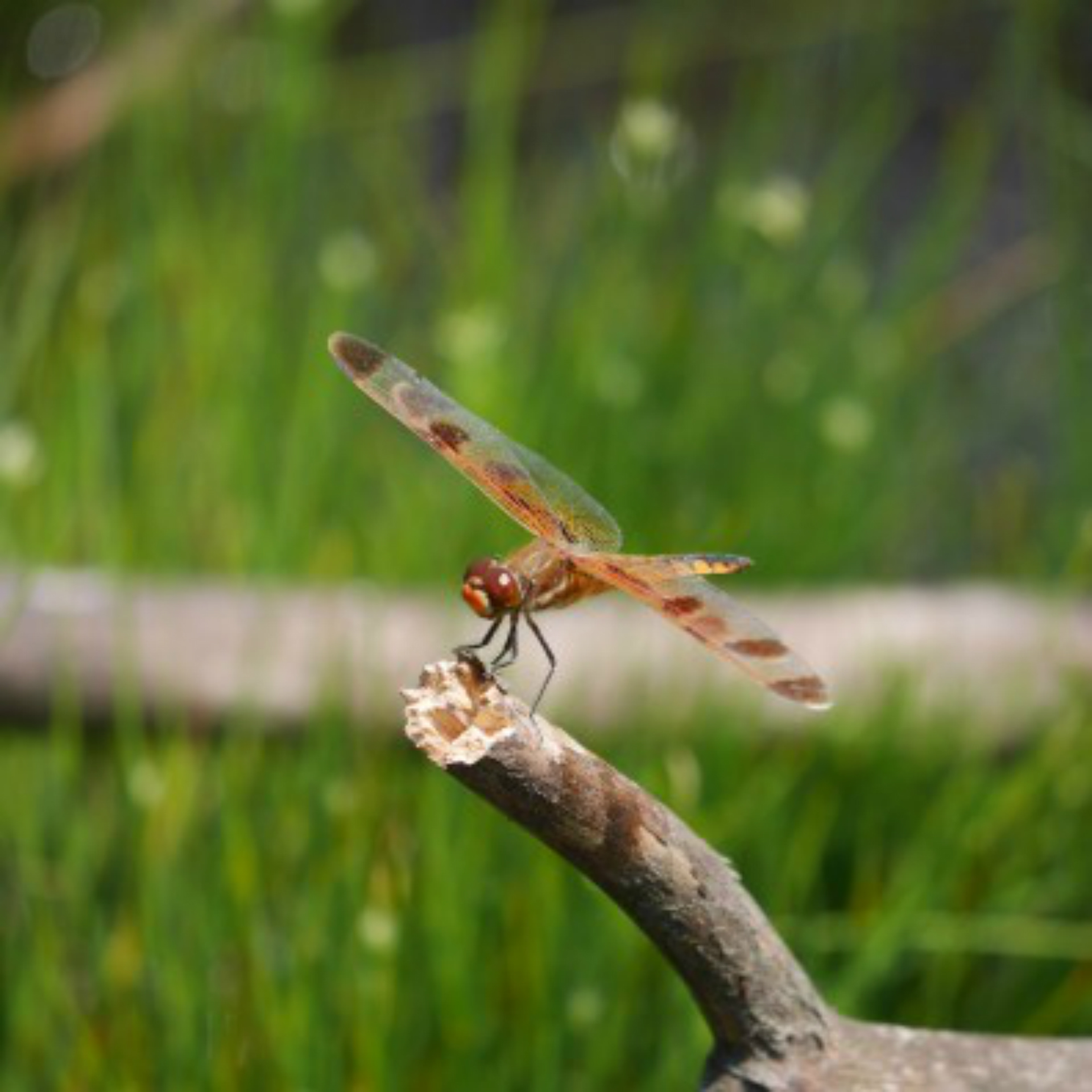 One of the many species of dragonflies at the bog.

Spruce Flats Bog is also a home for many common animal species, like deer and bear. But a butterfly called the bog copper relies on peatland habitat, and the wild cranberry plants found in Pennsylvania’s peatlands.

These are birds they are paying special attention to because the need for conservation is so high. In Canada, they’re listed as threatened. Yeany says the male has a slate gray back with a contrasting yellow face and chest, marked by a black “necklace.”

Yeany says there are 90 bird species of greatest conservation need in Pennsylvania, and within that group are species like the yellow-bellied flycatcher and the blackpoll warbler.

“Without these wetlands, they wouldn’t have a place to breed in Pennsylvania,” Yeany says. “Birds are really linked to habitat type, and that’s one reason that we’re looking at birds, because they’re a good indicator of change.”

Zimmerman says that’s what makes these places in Pennsylvania so unusual.

“We’re in an area that has had so much recent human history, as opposed to farther north, and in Maine, Wisconsin and Canada, where you have these vast expanses of these boreal ecosystems,” he says. “We have something that’s kind of a remnant, a southern extreme of this type.”

Peat tells the story of centuries

To get to a study plot, where some of the plant and animal communities here are measured and recorded, we just walk off the trail, into the forest. The ground starts to become less solid within a couple minutes.

Soon it’s like walking on a waterbed. It smells a little like a wet basement. We move carefully between oak trees, as greenbriar thorns rip into our pants and shirts. When we arrive at the plot 15 minutes later, we’re ankle deep in water.

Zimmerman takes a soil core sample, to get a better picture of what’s happening in the muck beneath our feet. He slices through the roots of the living sphagnum moss, and removes the top layer. Then he grabs onto a longer tool, which looks like a pogo stick with a sharp end.

“This the soil auger, and this is what you can do to get the deeper material,” Zimmerman says. “I can’t reach my hand down that much farther.”

He pulls up progressively more decomposed material the deeper he plumbs. The peat gets progressively darker in color, too. There’s little oxygen, so the plants here decompose slowly, and the soil core samples tell a story.

He says there hundreds of years of data within these peatlands. 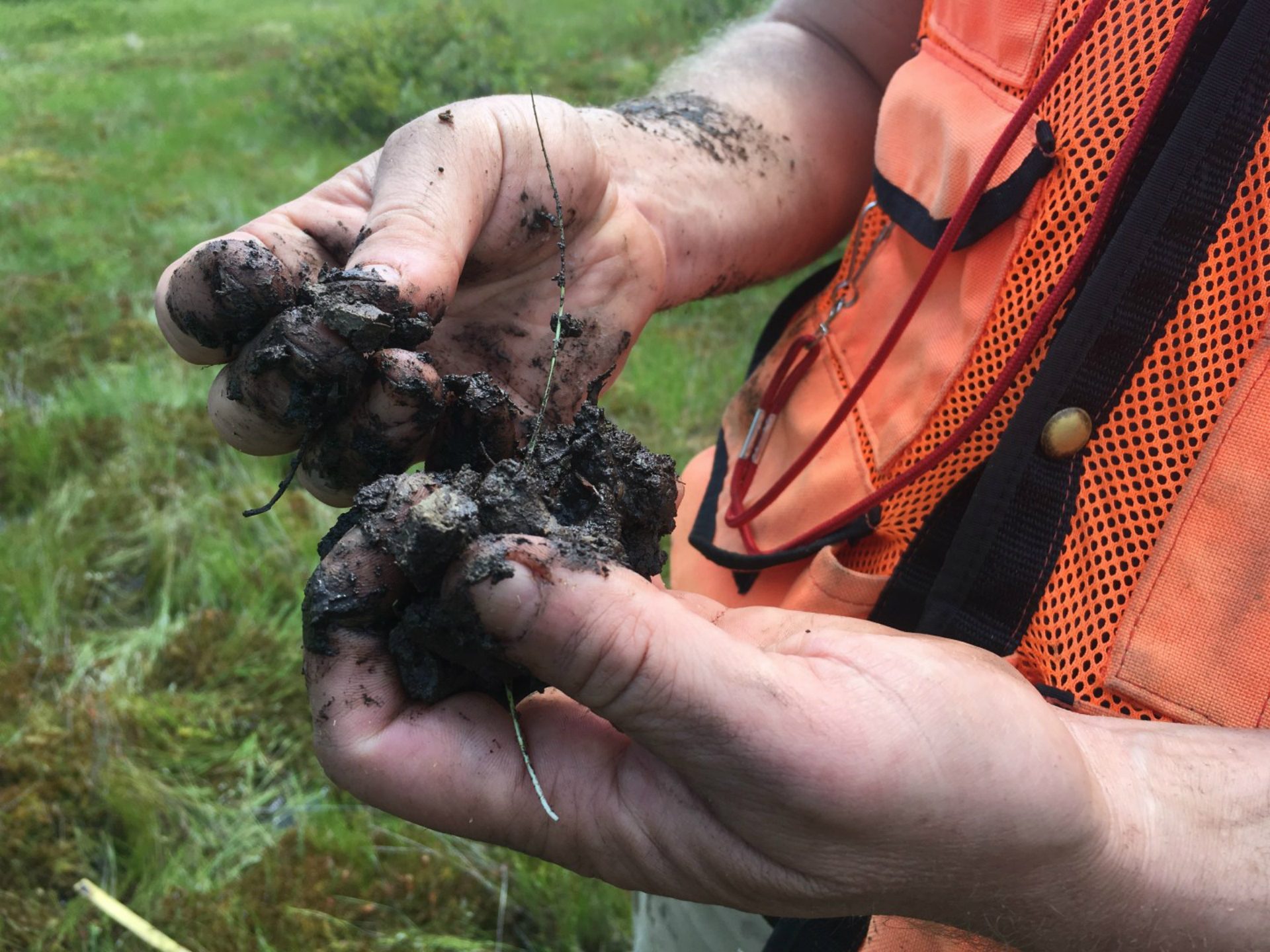 Climate change could alter the ecosystem

Climate models predict more wet weather for Pennsylvania. Zimmerman says that could mean changes in this ecosystem. The entire water table could rise and push the wetland out into the surrounding trees.

Mary Ann Furedi says the trees in this wetland act like straws, sucking up water. It then evaporates into the atmosphere. Hotter temperatures from climate change could increase evaporation, creating different patterns of drying here.

“The purpose of the work that we’re doing is just beginning to document what’s here,” Furedi says. “Without that good, solid baseline data, we don’t have a comparison for future scenarios.”

David Yeany says when they come back to do a third round of monitoring here in five to seven years, they’ll see how conditions have changed.

Zimmerman says one thing that they know for sure is that change is constant. This wetland will someday become shrub swamp, and then revert back into a hemlock forest, if the hemlock wooly adelgid pest doesn’t kill them first.

“But a little bit farther away, maybe a family of beavers move in, and flood the area, and turn it back into this open wetland, again,” he explains. “So the more that you protect the large areas like this, and connected landscapes, you can protect the high quality, small areas within that larger matrix.”

That approach could give the plant and animal species in this little pocket of habitat a chance to adapt, to climate change or even more human activity, like the development of new roads or natural gas infrastructure.

This story is part of the series “Wild Pennsylvania,” which is funded by the Richard King Mellon Foundation. To check out other stories in the series, click here.