The Lombardo Welcome Center at Millersville University produced 75 percent more energy than it consumed in 2018.

Inside one of Pennsylvania’s most energy-efficient buildings

During the summer, things quiet down at Millersville University. It’s a good time for prospective students and their parents to check out the campus in Lancaster County.

The first stop on their tour is a brand-new, $10 million building, called the Lombardo Welcome Center. It’s the first building in Pennsylvania to get a zero-energy certification from the International Living Future Institute—a Seattle-based organization that promotes sustainable construction.

“Net-zero means it produces as much energy as it consumes in a year,” explains Kathy Schreiber, a professor of geography, who teaches about environmental issues and sustainability at Millersville.

The discussion around climate change often focuses on how to ramp up carbon-neutral forms of energy, but if the world is to achieve the 2015 Paris climate goals, and avoid the worst effects of global warming, people also need to use energy more efficiently. 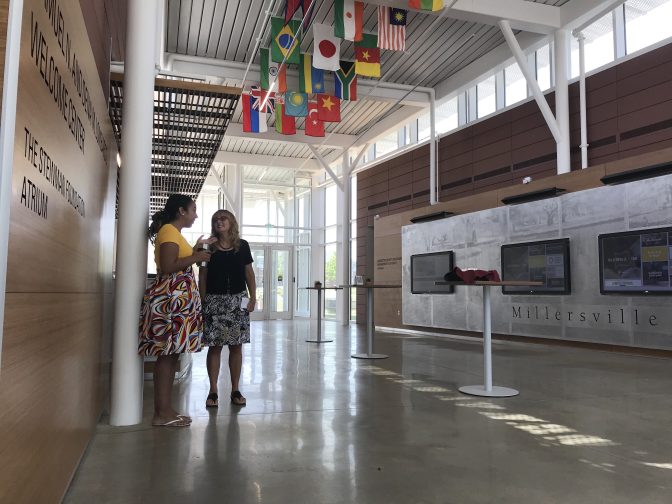 The atrium of the Lombardo Welcome Center at Millersville University

The Lombardo Welcome Center actually does better than “net-zero,” according to Schreiber. During its first year of operation, in 2018, the building generated 75 percent more energy than it consumed–thanks to more than 500 solar panels on the roof, a ground-mounted solar array, and 20 geothermal wells, outside on the lawn.

The wells don’t look like much on the surface, but they help keep the building warm in the winter and cool in the summer. 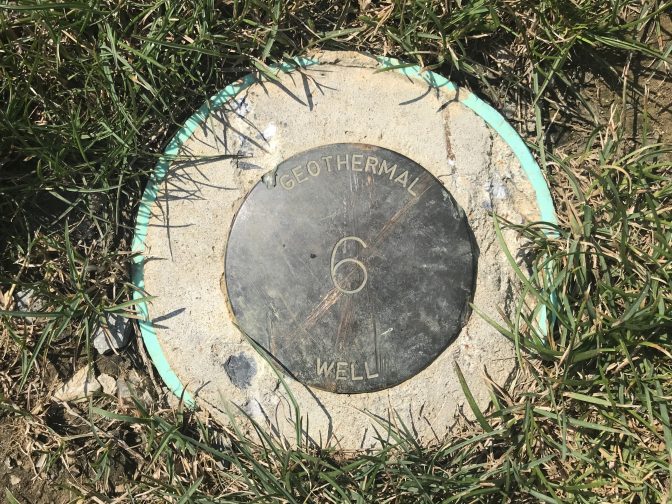 The Lombardo Welcome Center at Millersville University has a geothermal well field that helps keep the building warm in the winter and cool in the summer.

The temperature down there is about 54 degrees Fahrenheit, year-round.

“We have an antifreeze that goes down. It takes heat from the building and puts it down into the ground in the summertime,” says Schreiber.”That antifreeze comes back up, and keeps the building cool.”

It works the same way—in reverse—during the winter

Back inside the atrium of the building, at first glance, the soaring glass walls look similar to those in many modern buildings, but move in a little closer, and you can see small gray dots scattered on the glass. They help block sunlight– another way to conserve energy on a hot summer day. It’s all part of Millersville’s goal to be carbon-neutral by 2040.

“These programs are very popular with higher education institutions,” Nicole Van Batenburg, the Institute’s communications director, says of the certification process. “Often, people use the buildings as demonstrations.”

Since it began 16 years ago, Van Batenburg says the institute has certified four other Pennsylvania buildings for sustainable practices: the Phipps Center for Sustainable Landscapes, the Nature Lab at Phipps, the Frick Environmental Center (all in Pittsburgh) and the Temple Tiny House in Philadelphia.

Energy efficiency is ‘an energy resource’

Julian Boggs, policy director for the Keystone Energy Efficiency Alliance, says it can be complicated to think about how to use energy efficiency to meet climate goals.

“In fact, that’s a little bit counter intuitive, the idea that energy efficiency is itself an energy resource,” he says. “That we can meet our energy needs, not by building a wind farm, or a solar farm, or a nuclear power plant, but by reducing our demand.”

He says the basic concept of not wasting energy is something both parties can agree on.

Boggs points to some recent successes in Pennsylvania. A year ago, the legislature approved, and Governor Tom Wolf signed, a new law known as Commercial Property Assessed Clean Energy. 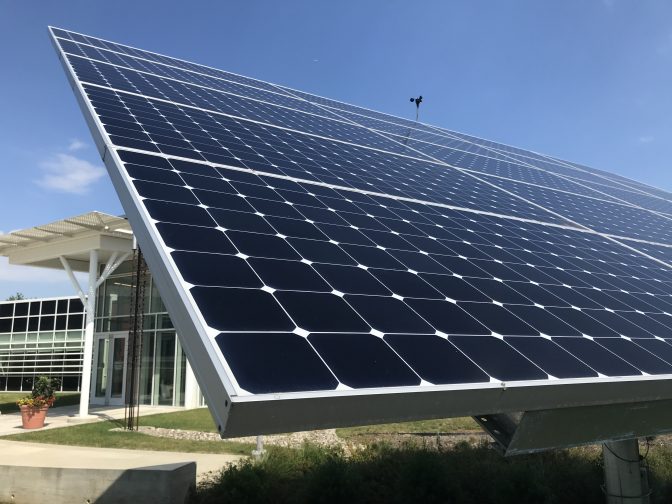 A ground-mounted solar panel at Millersville University tracks the sun’s path across the sky.

And Boggs says the state took another leap forward last year, when it updated what’s known as the International Energy Conservation Code standards.

In January, Governor Tom Wolf signed an executive order directing state agencies to reduce their energy consumption by 3 percent each year, with the goal of hitting a 21 percent reduction by 2025.

Boggs says even though energy efficiency can often be more complex than screwing in a few new LED lightbulbs, policymakers can help smooth the way by creating new energy-saving programs and financing options.