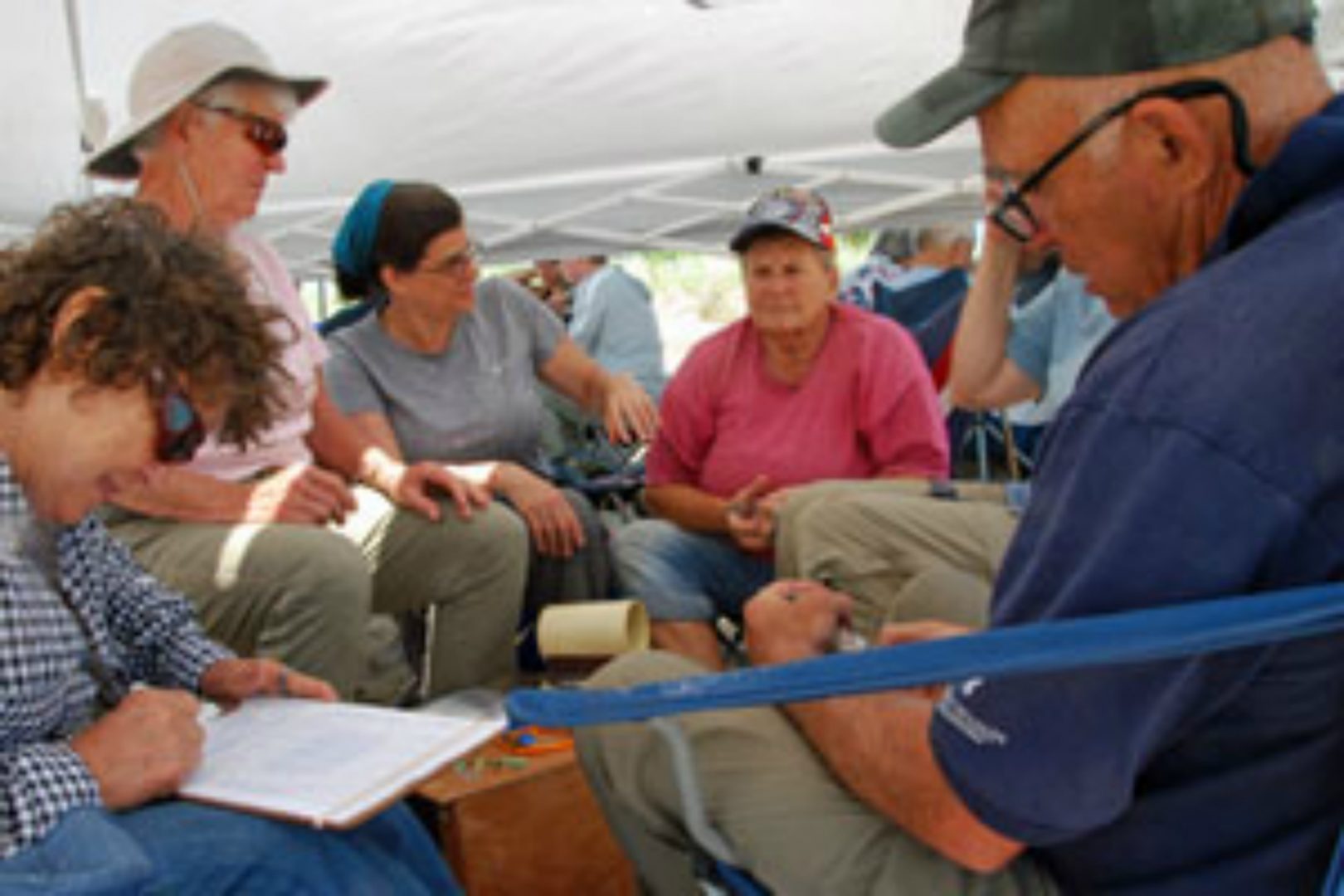 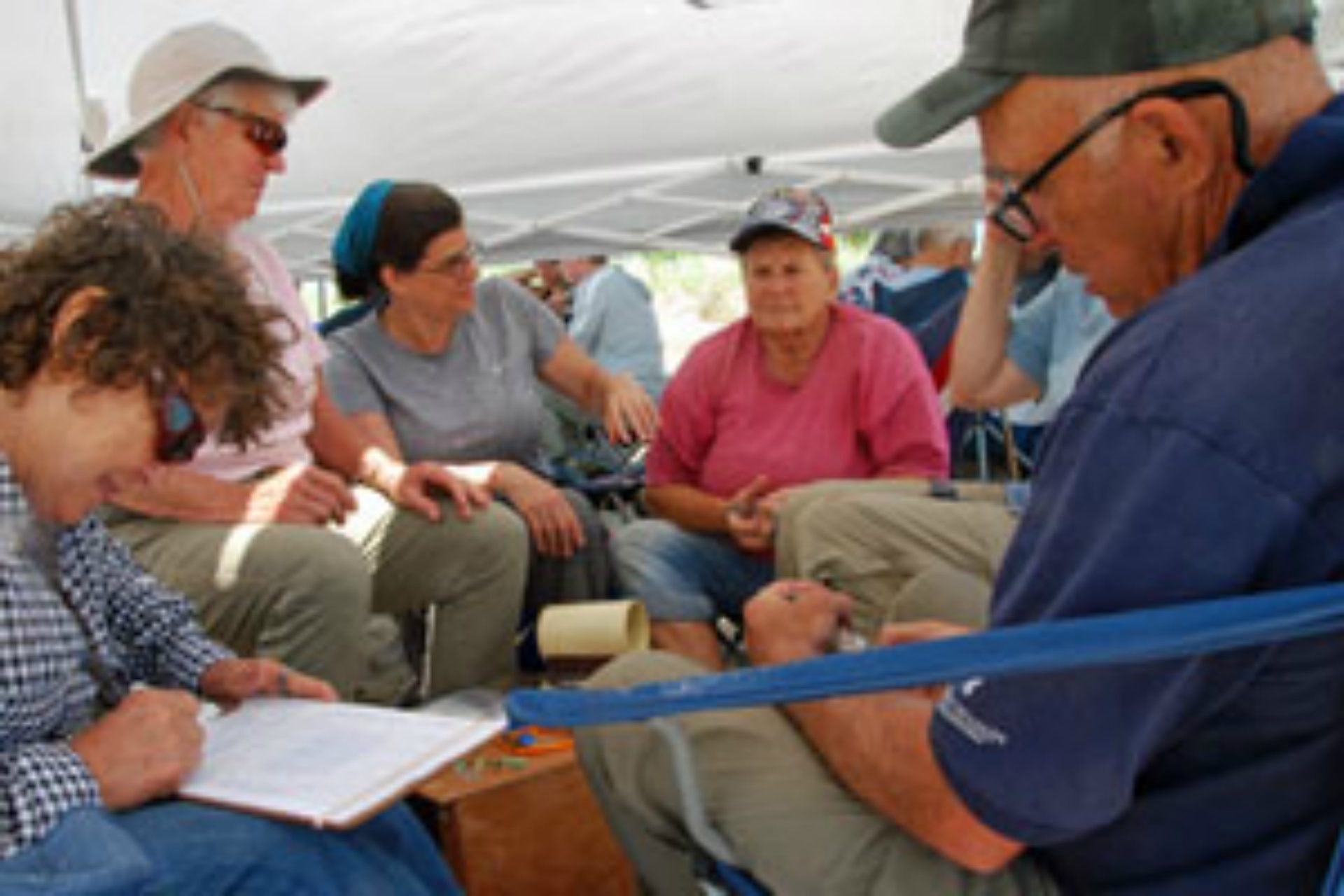 Larry Niles has been working to protect migrating shorebirds on New Jersey’s Delaware Bay beaches for the last 23 years, and he’s still worried that some of them might go extinct.

Niles, a former Department of Environmental Protection biologist who now runs his own wildlife-investigating company, leads teams of scientists and volunteers who trap, tag, weigh, measure and then release the birds which stop briefly on the bay beaches during their long-distance spring migration from South America to the Canadian Arctic.

The work is designed to assess the health of half a dozen bird species that refuel on the eggs of the bay’s horseshoe crabs in places like Reeds Beach in Cape May County after flying thousands of miles from their wintering grounds. Scientists began sounding the alarm about the bird populations in the 1990s when the commercial fishing industry harvested the crabs for bait in unprecedented numbers, causing sharp declines in both eggs and birds.

Despite a New Jersey moratorium on the crab harvest since 2008, reduced quotas for three other bay states that still take crabs, and a bay-wide ban on harvesting egg-laying females, shorebird numbers have not recovered to anywhere near their levels in the 1980s before the over-harvest of crabs began.

So conservation groups led by New Jersey Audubon are renewing their efforts to persuade the other bay states — Delaware, Maryland and Virginia — to ban the crab harvest, and to persuade biomedical companies to stop using lysate, an extract from horseshoe crab blood, to test for toxins in their products and switch to a synthetic alternative.

Time to ‘ramp up efforts’

“What we’ve tried to do is work within the framework of the Atlantic States Marine Fisheries Commission that would allow the harvest to be determined by the status of the crab population and the shorebird population,” said David Mizrahi, vice president of research and monitoring for New Jersey Audubon. “Well, that hasn’t worked so we really feel like it’s time to ramp up our efforts to move to the next level.”

A new campaign, also backed by environmental groups like the American Littoral Society and the Delaware Nature Society, aims to fully restore the crab population by 2030 from its current status estimated at only 30 percent of the bay’s carrying capacity.

Without a significant and sustained increase in horseshoe crabs, the advocates say there will be continued doubts about the long-term survival of the shorebird species whose massed presence on the bay beaches each May draws scientists and volunteers from around the world to witness a great natural spectacle.

Concern is focused on the red knot, a gray-and-red bird weighing less than five ounces, whose numbers moving through the bay this spring were estimated at about 30,000, up from a low of just 10,000 in the early 2000s but still only about a third of their level during the 1980s. Though the numbers have been creeping up lately, naturalists say the species still isn’t numerous enough to withstand shocks like severe weather in its Arctic breeding grounds, or development along its migration route, leaving it vulnerable to eventual extinction. The bird was listed by the federal government as a threatened species in 2015.

Other species of concern include semipalmated sandpipers and ruddy turnstones, both of which were among the hundreds caught and processed by Niles and his volunteers during their work on the bay beaches this spring.

If the crab population is restored, it will also benefit fish and other marine species that feed on the crabs, and which have themselves been depleted by the crabs’ decline, advocates say. A recovery in those fish would help commercial and recreational fisheries.

The crab harvest is controlled in part by the Atlantic States Marine Fisheries Commission, an interstate regulator, which sets quotas and says there has been some increase in the number of mature female crabs since it banned the female harvest in 2013.

Commission data show the number of mature female crabs in the bay rose to 7.8 million in 2017 from 5.4 million in 2011 before the quota system began, and that the number of red knots visiting the bay on the spring migration is fairly stable at around 45,000, as measured by a different method from that used by conservationists.

Female crab numbers have not rebounded to the 11.2 million, or 80 percent of the bay’s carrying capacity, that could lead the commission to lift its ban on the harvest of females, but the data are showing a steady increase, said Mike Schmidtke, the commission’s Fishery Management Plan Coordinator.

“Right now, there seems to be a decent abundance, and a stable if not increasing trend of horseshoe crabs in the Delaware Bay so the package that allows some level of bait continues to be selected,” he said, referring to one of a set of alternatives to crab management that the commission has chosen since 2013.

But campaigners like Niles deny the crabs have rebounded, pointing to evidence that the density of crab eggs is sharply lower than in prior decades, and is not recovering.

“There’s no increase,” Niles said, referring to the commission’s claim that the female crab population is rising. “If there was an increase, it would show up in egg densities.”

Armed with what they see as evidence of the commission’s failure to restore crab numbers over the last decade, the conservation groups are making a new attempt to persuade the other bay states to follow New Jersey’s lead and impose their own bans on the crab harvest.

But officials in Delaware, which is permitted to take around 160,000 male crabs this year after June 7 — when the shorebird migration ends — indicated they have no plans to stop.

“According to the most recent peer-reviewed assessment approved for use in horseshoe crab management, the Delaware Bay Region’s horseshoe crab population is abundant and stable, with no sign of population decline,” the state’s Department of Natural Resources and Environmental Control said in a statement. “Female spawning biomass has increased, with low mortality. DNREC therefore supports the current managed, sustainable harvest of horseshoe crabs in Delaware.”

Delaware tried to impose a ban

Delaware proposed a ban in 2006 but was sued by the fishing industry and lost in court.

Officials in Maryland and Virginia did not respond to requests for comment.

If policy change at the commission or in the states looks unlikely, conservationists are more hopeful that they can persuade the biomedical industry to use a synthetic material called rFC instead of the crab-based lysate, for which an unknown number of Delaware Bay crabs are bled each year. At least 15 percent die because of the process, and the survivors may not be able to breed, the advocates say.

The industry’s switch is being led by the pharmaceutical giant Eli Lilly, which began using rFC to test its new products in 2016 and expects the changeover to be 90 percent complete by the end of next year, said Jay Bolden, senior consultant biologist for the company.

Hopes of persuading other drug makers to follow are pinned on possible changes by pharmacopeias, international manuals that set pharmaceutical industry standards for drug development. The manuals currently require the horseshoe crab-based product to be used to test for endotoxins — toxins contained in the cell walls of bacteria — but their authors are indicating that they may at some point be willing to specify the synthetic product instead, Bolden said.

Crabs taken for bleeding are not included in the commission’s quotas, and their numbers and mortality rates are not published because of business confidentiality concerns on the part of the companies that bleed the crabs.

While the new campaign seeks to change corporate and government policy, the Delaware Bay scientists and dozens of volunteers continue their annual “catch” at places like Reeds Beach where they count the number of birds passing through and assess whether they are in good enough condition to complete their epic journey.

On May 21, groups of scientists and volunteers weighed, measured and tagged three species of the birds after capturing them in net a short time earlier. One red knot weighed an unusually heavy 221 grams (7.8 ounces), indicating that it had about doubled its body weight since arriving from South America, taking advantage of this year’s good level of crab spawning.

Gwen Binsfeld, 65, has been coming from her home in Kings City, Ontario, Canada to manage volunteers on the Delaware Bay for the last 15 years. She enjoys watching the birds put on weight during their brief stopover, and hopes her efforts will help species survive.

“We have to restrict the number of people who come out to help,” she said while waiting in a sand dune for a trapping net to be fired over a flock of birds on the beach. “They want to see the birds up close. Hopefully, they get an emotional connection to the birds and will want to help preserve all birds.”

Clive Minton, 85, has traveled from his home in Melbourne, Australia every year for the last 23 years to help with the Delaware Bay catch, and said he is motivated by both the science and the spectacle.

“It is an incredible bird spectacle when the shorebirds are stopping over here in May in their tens of thousands just for a week or two weeks,” he said, while attaching metal bands to the legs of red knots. “It is one of the world-famous places to go to see migratory shorebirds at their best: close to, tame, in breeding plumage and in large numbers.”

Fracking in Ohio series: How Ohio compares to Pennsylvania for oversight of gas industry