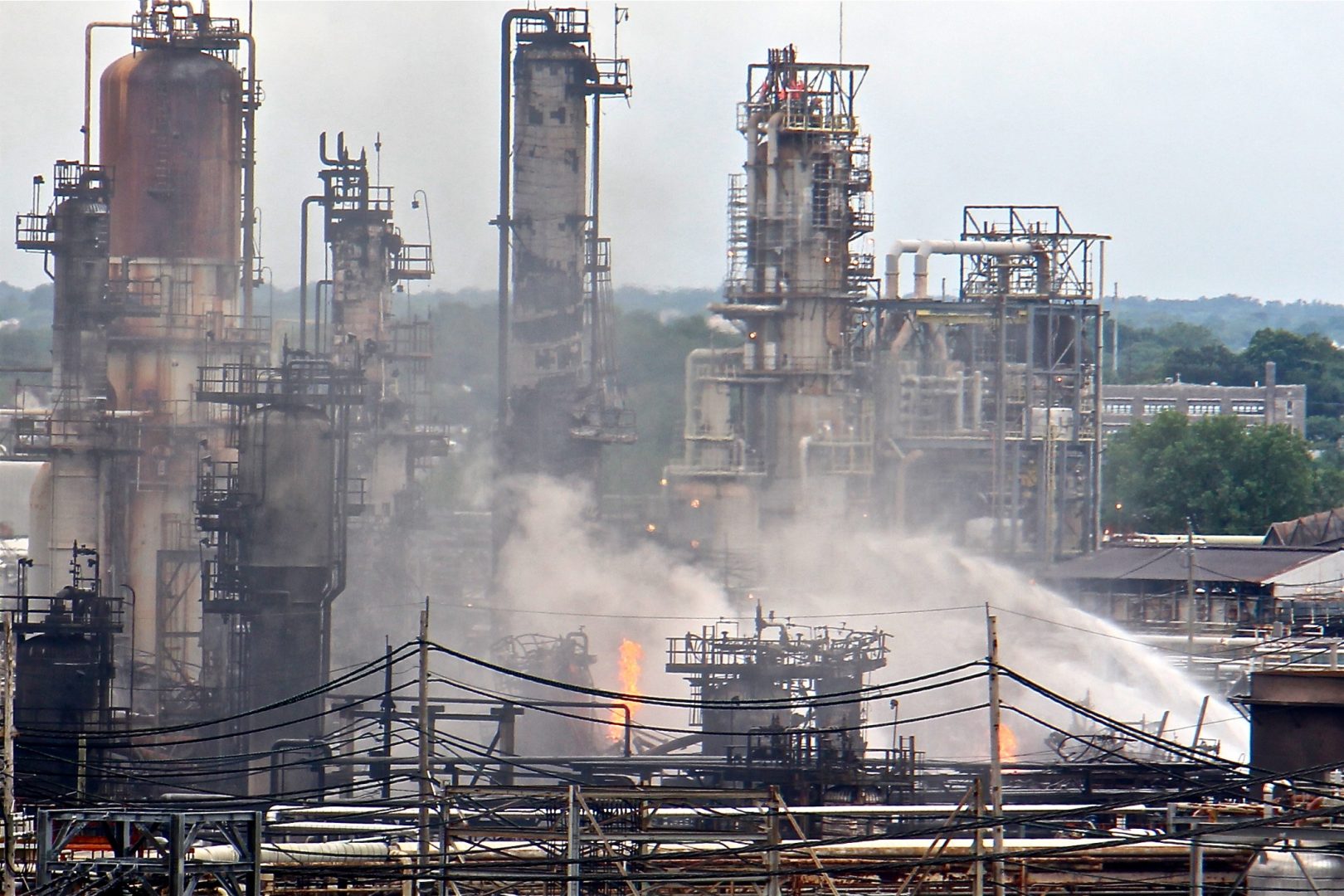 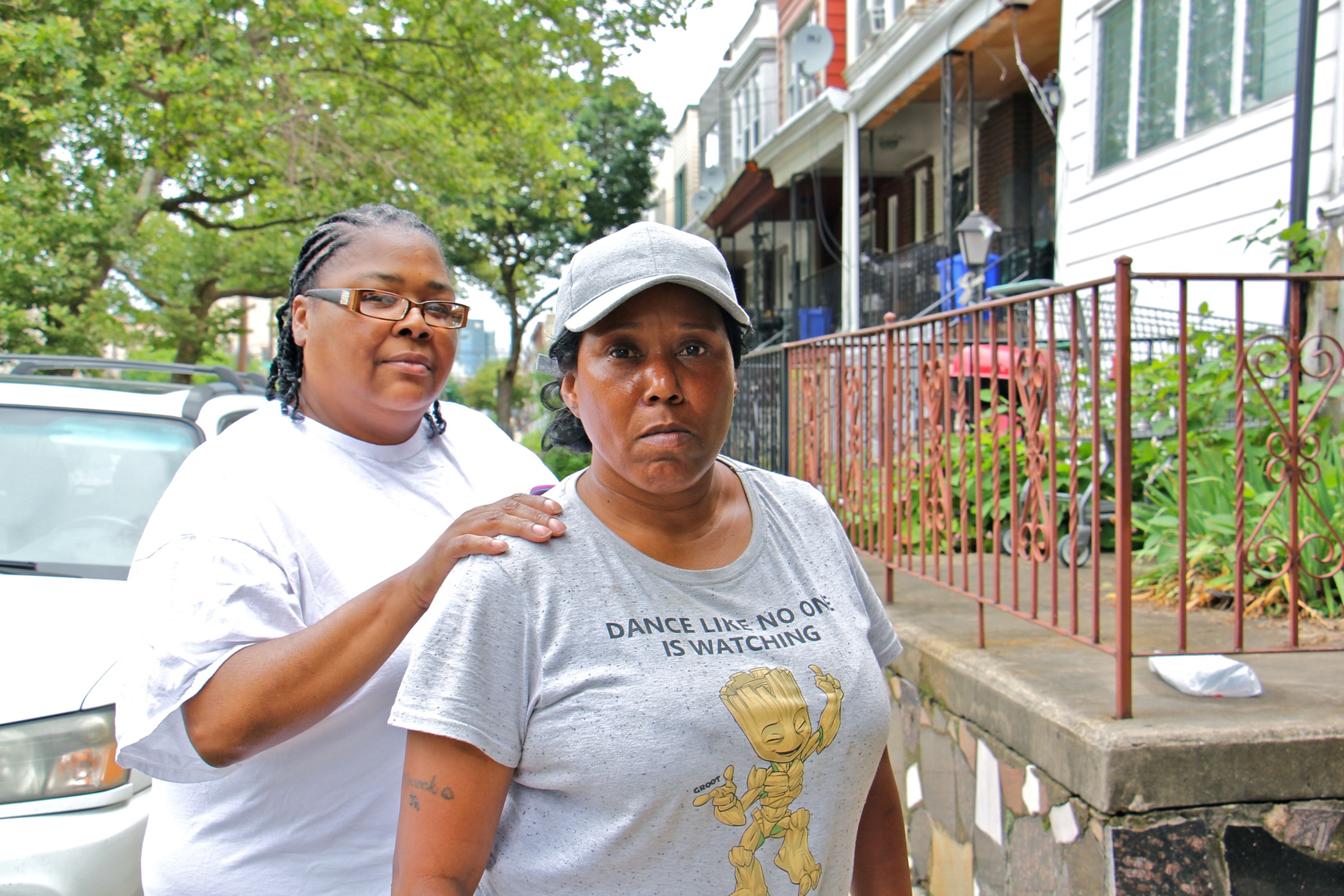 Kilynn Johnson (left) and Sonya Sanders, residents of South 32nd Street, are members of Philly Thrive, an organization that opposes Philadelphia Energy Solutions and blames the refinery for many of the neighborhood’s health problems. (Emma Lee/WHYY)

Following a massive fire at the Philadelphia Energy Solutions Refining Complex, an oil refinery in South Philadelphia, health and air quality experts say residents in the path of the fire’s plume should be aware of potential health impacts from smoke and particulate matter.

A series of explosions that produced a giant fireball at the refinery in the early morning hours Friday led to plumes of black smoke and noxious odors that spread across the region.

After receiving a request from the Clean Air Council, the U.S. Chemical Safety and Hazard Investigation announced it is deploying a four-person team to investigate the explosion.

It has not yet been confirmed which chemicals burned in the fire, but preliminary statements have named propane and butane. According to Reuters, some sources cautioned an explosion occurred near hydrofluoric acid. The last of these is controversial for being one of the deadliest chemicals in the refining process.

Philadelphia Energy Solutions says the plant is running at a “reduced rate” and the cause of the fire is under investigation.

“We are thankful that no one was seriously injured during today’s event,” wrote PES spokeswoman Cherice Corley in an email. “Our immediate focus is to continue to safe the area and assess the balance of the facility. We will remain under Incident Command until further notice.”

The Philadelphia Department of Public Health said in a statement that preliminary air sampling at the refinery and adjacent sites has shown no ambient carbon monoxide, combustible hydrocarbons or hydrogen sulfide.

“Based on results of samples taken this morning, the Health Department has no findings that would suggest there is a threat to the public health as a result of today’s fire,” said James Garrow, a department spokesman.

The findings were based on two air samples taken from up- and down-wind of the refinery this morning.

“There definitely is a risk of toxic chemical exposure,” said Gretchen Dahlkemper, who runs her own children’s health and toxic chemicals policy consulting firm in Philadelphia.

Dahlkemper lives in Point Breeze, a neighborhood near the refinery, and is a mother of three. “My 8-year-old daughter has asthma, as do a high percentage of kids in our neighborhood,” she said.

In addition to children and infants, groups most affected by air pollution include elderly and pregnant individuals, as well as people who have existing respiratory or heart conditions, or are otherwise immunocompromised.

Marilyn Howarth, a doctor at the Center of Excellence in Environmental Toxicology at The University of Pennsylvania, agreed the fire could worsen symptoms for people with asthma and heart disease.

“There may be short term impacts on people with those conditions,” she said.

These diseases are also caused by other factors, such as smoking. So it’s often difficult to link individual cases directly to the refinery.

Kilynn Johnson and Sonya Sanders live downwind of the refinery in Grays Ferry. They are members of Philly Thrive, a community organization opposed to the plant.

“We’ve all been living here since we were kids. OK, this has been going on since our mothers were children. This has to stop,” said Sanders.

The pair referred to a smaller fire that occurred at the plant 11 days ago.

“It was a mild fire, so they say. But what is it going to take?” said Johnson. “Let us live, let us breathe fresh air. We don’t need to be any sicker than we already are.”

Sanders said foul odors from the refinery are common, and she and her neighbors suspect the refinery has made them sick.

“We smell it like it’s in our house. I have to go get blankets, put it down by the door, make sure my windows are shut and everything. And we are scared to death,” she said.

As of early Friday evening, the fire was no longer spreading, but still burning. After traveling northeast on Friday morning, smoke plumes turned southeast, in the direction of Deptford and Gloucester townships in New Jersey, said Peter DeCarlo, an associate professor of engineering at Drexel University.

DeCarlo cautioned that the preliminary air monitoring is meant to ensure first responders aren’t in immediate danger. He said it shouldn’t be used to infer safety for community members.

“Emergency responders and firefighters are very, very healthy people,” he said. “People who are not healthy residents of the community — who might be elderly, or kids — are going to respond very differently to levels of pollution than those first responders.”

Over the next day, he said, everyone in the immediate vicinity or downwind of the refinery should try to limit their exposure to air pollutants and dust from the fire.

The best thing to do may be to leave the area until the fire is completely out and the smoke has dissipated, DeCarlo said. When the air is fresher, he said, people should open their windows and doors to flush their homes of air pollutants that have seeped in through cracks and crevices.

DeCarlo added that the wind, which was relatively strong Friday, will help clear the plume out pretty quickly once the fire is extinguished.

Those who can’t leave the area should stay indoors with the windows closed, said Blanca Himes, an assistant professor of biostatistics and epidemiology at the University of Pennsylvania.

If people start to feel symptoms such as shortness of breath, burning or itching sensations in their eyes or noses, fatigue, or headaches, they should seek medical care, Himes said.

“Some people are very sensitive to chemical smells, and they’ll know immediately that something is happening,” she said. She added, however, that not all pollutants have an odor.

‘Having my meal elsewhere’

Philadelphia Energy Solutions is the largest refinery on the East Coast processing 335,000 barrels of crude oil a day. The former Sunoco refinery had been revived by cheap Bakken crude oil shipped by rail from North Dakota but it has since suffered economic setbacks and emerged from bankruptcy last year. It’s also the largest single source of air pollution in Philadelphia and has never been in compliance with the Clean Air Act.

Philadelphia Energy Solutions said in a statement that there were three separate explosions at the refinery, which affected an alkylation unit.

The company has not confirmed which products were burning, but suggested it was “mostly propane.” Earlier on Friday, Philadelphia fire officials stated that a butane vat ignited.

Reuters reported that one explosion may have occurred at an alkylation unit that uses hydrofluoric acid, one of the most dangerous and notorious chemicals in refining.

Advocates have long argued that hydrofluoric acid should not be used in the process. Under intense pressure, it can form a noxious vapor that destroys tissues.

“It’s a very caustic chemical, and it can cause a lot of damage,” DeCarlo said. “If you’re in a chemistry laboratory and you’re using hydrofluoric acid, you have to take extra precautions beyond what’s normal.”

If hydrofluoric acid is in the smoke plume, and “if it were me living in that area, I would certainly be having my meal elsewhere right now,” he added.

Chemical safety expert Fred Millar said the refinery uses highly toxic hydrofluoric acid to make gasoline and that there was a danger of the explosions rupturing the storage tank.

There is no indication that the chemical was released in Friday’s fire.

But Millar said an evacuation should have been called in South Philadelphia, noting that the toxic cloud from hydrofluoric acid can grow to as much as 10 miles in length. The chemical can cause serious health issues and even death.

“A hydrofluoride refinery is about the most dangerous facility anyone could have in the community,”said Millar. “The hydrofluoride tank can produce an enormously dangerously toxic gas cloud. Depending on which way the wind was blowing, unless it was blowing straight up to heaven, the city should have called a precautionary evacuation.”

Pollution from the refinery, which is the largest on the East Coast, poses a range of health risks to nearby residents, including cancer, heart disease and respiratory diseases like asthma. The community surrounding the refinery is predominantly black and low-income.

DeCarlo also called attention to the long-term effects of exposure to air pollution from the site.

“This is a refinery that’s been around since 1860 and has a long legacy of environmental issues. So just because we’re seeing the acute impacts or the immediate impacts of this fire doesn’t mean we should forget about the long-term and chronic impacts to the environment, and to the local people living in that area and their health,” he said.

Philadelphia Energy Solutions released a statement apologizing to the community and says it is following protocol to protect the environment.

Mayor Jim Kenney has convened a working group to examine safety and air quality protocols at the South Philadelphia refinery.

Kenney said in a release sent Friday that the working group would explore longtime concerns from people who live near the Philadelphia Energy Solutions refinery at 3100 W. Passyunk Ave.

“I believe that there is room for improvement, both in the operation of the refinery in light of two fires in as many weeks, and in the communication to residents,” Kenney said.