A new strategy to regrow a forest on abandoned mineland: Start by tearing up the earth 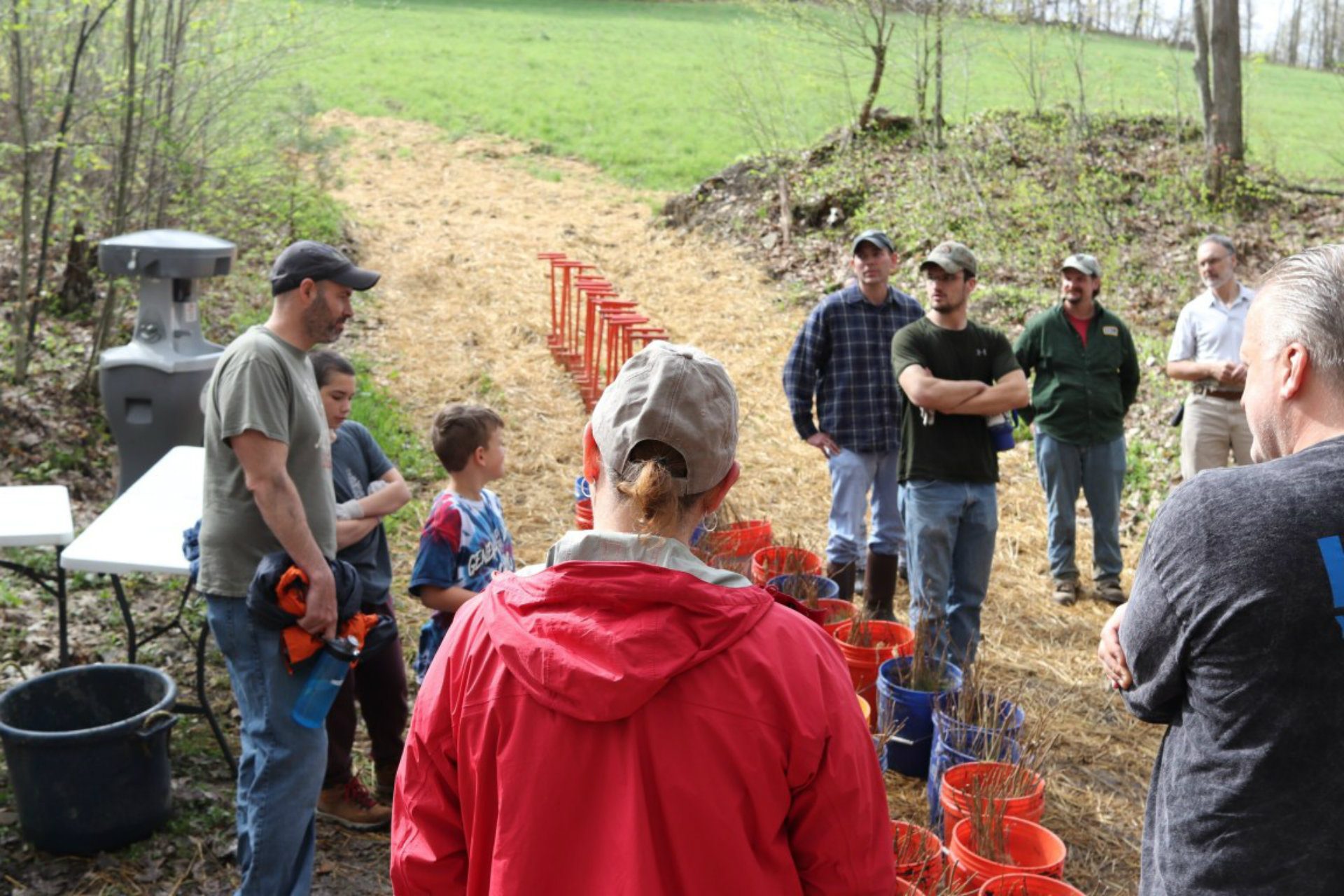 Volunteers helped plant trees on the site in the Moshannon State Forest.

Deep in the Moshannon State Forest in Elk County, there’s a sloped, barren patch of land surrounded by an otherwise healthy forest. It looks as if a tornado has torn through here — the earth has been churned up, with tangled roots and jumbled rocks.

In the late 1800s, this area was deep-mined. Later, it was strip-mined. When the coal companies left in the mid-1990s, the land was abandoned. Then about twelve years ago, the site was reclaimed. Trees were planted, but didn’t take, as often happens on reclaimed minelands.

“The technology back then was to just re-contour the land,” explains John Hecker, a forester for the state who manages this track of land. “But the bulldozers, as they ran over the land, they compacted the soil. Trees don’t do very well on compacted soil. This site is a good example of that.”

What few trees are here are extremely stunted and thin. But now this — and hundreds of acres of formerly mined land in Pennsylvania — are getting an ecological do-over. ‘Reclamation 2.0,’ you could call it.

That’s why the ground is ripped apart. A jumbo-sized bulldozer with a 3-foot blade came through here earlier in the year and criss crossed the area with deep furrows. As the dozer went through, it blended the materials together to make what looks like very healthy soil: a lot of shale, pre-mined and native soils and sandstone.

“Now the tree roots [can] grow down into that loose soil where it’s moist,” Hecker said. “Those trees will really grow well.”

This aggressive form of bulldozing is a relatively new technique; it’s only been used for the last 10 years or so. It’s called the Forestry Reclamation Approach.

Scott Eggerud is a forester and regulator with the federal Office of Surface Mine Reclamation Enforcement. He says that this new technique goes against what they were taught at forestry school.

“What they taught us in school is you pack it in and put aggressive ground cover to stabilize the site,” he said.

And that’s exactly what happened here on this site. The non-native grasses that were planted 12 years ago did really well on the compacted soil. The grasses grew so think that rainwater couldn’t seep into the ground, instead running off into the streams below. This new plan will change that.

“Instead of water washing off the sites, it now infiltrates,” said Eggerud. “It’s more natural — the way it was supposed to be, the way it was before mining. And believe it or not, this is nutrient rich material. We’re going to grow some really nice trees in this area.”

A crew of professional tree-planters was brought in earlier in the week to get the bulk of the lot planted. And now it’s up to the 20 or so volunteers to do the rest. They’re planting 2,100 tree saplings on 2 acres of land.

The samplings, donated by the Pennsylvania Department of Conservation and Natural Resources, are a mix of native tree species: white pine, quaking aspen, red oak and black locust.

Twelve-year-old Trey Slavonic is here with his dad and little brother.

“This is important because it helps cover up all the mistakes people have done in the mining and taking the coal off from the top layers,” he said. “Makes it look more natural and have a better and more habitat for the animals.”

Approximately half of this 45 acre site will be left as grassland, benefitting the wild elk in the region. The tree planting will also help the golden-winged warbler, a migratory songbird that breeds in Pennsylvania. Populations have declined by two-thirds since the 1960s.

Laura Brey, program coordinator for the Pennsylvania Environmental Council, oversees this reforestation effort across the state. Bray says the hope is that the warblers will be attracted to this spot as the trees start grow.

“It’s reliant on young forest habitat. So our goal here is to create that habitat for breeding purposes,” Bray said. “It’s nice to have these edges where you have mature forests and then you have some grassland. You’ll have some shrubs and then some trees that will mature to full size. It’s a good opportunity for us to make the site productive again.”

PEC received grant money from the National Fish and Wildlife Foundation, Pennsylvania Forestry Association and Foundation for Pennsylvania Watersheds to cover all costs associated with the planting except for the tree seedlings. This is the fourth year PEC has been doing these projects. This year, they will have reforested about 75 acres of public public and private land. 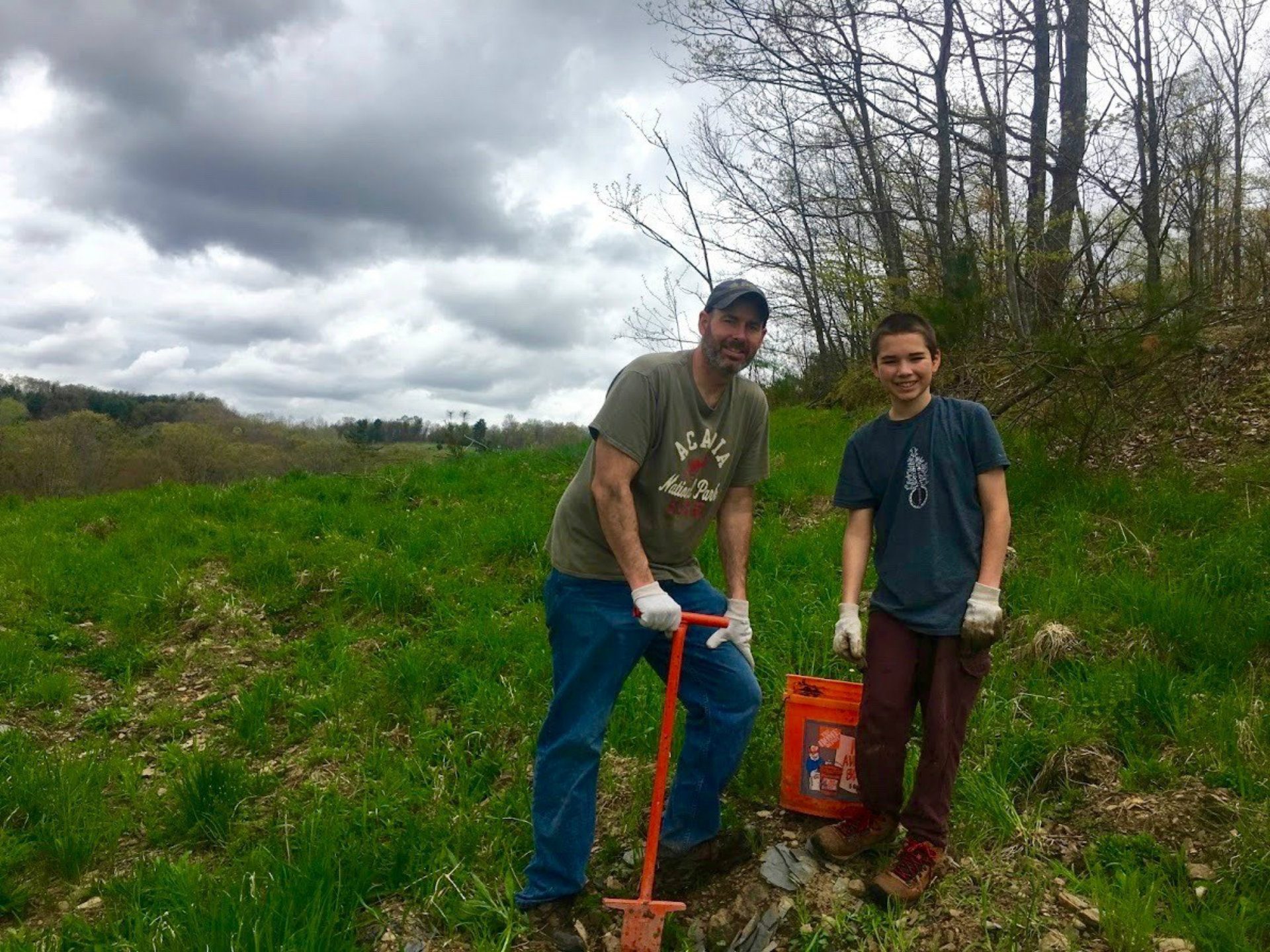 Ron and Trey Slavonic plant saplings on reclaimed mine land in the Moshannon State Forest as part of an ongoing reforestation project.

“We’re excited to continue to grow this program and do more,” Bray said. “There’s a lot of a lot of opportunity for reforestation across the state.”

It will be about 50 years before there’s a mature forest here again. Scott Eggerud, the forester, hopes the volunteers will come back to see how the trees they’ve planted are doing. Though, he says it’s not just about growing trees.

“The trees are an indicator of the quality of that site,” he said. “If we’re growing nice trees that tells us that we have a very healthy ecosystem.”

Now that the planting is done on this site, next is the Gallitzin State Forest in Cambria County.

This story is part of The Allegheny Front’s series, Wild Pennsylvania, which is funded by the Richard King Mellon Foundation. To check out the other stories in the series, click here.