Robert Davidson, collection manager for the section of invertebrate zoology at the Carnegie Museum of Natural History, shows specimens of Brood VIII cicadas that emerged in 2002 -- the last time these 17-year cicadas were seen.

Everything you need to know about the cicadas that will soon swarm southwest Pa.

Millions of cicadas will soon crawl out of the soil in southwestern Pennsylvania. This brood — Brood VIII — emerges every 17 years for about six weeks.

Robert Davidson, collection manager for the section of invertebrate zoology at the Carnegie Museum of Natural History, spoke with WESA about the insects.

When and where will the cicadas come out?

It could happen any day now.

“We have the issue today of global warming and climate change, which makes it much less predictable,” Davidson said. “In the past, you could pretty much count on mid-May and they’re usually out for about six weeks. The adult form lives for about a month, but they don’t all come out at once. They come out over a couple-week period.” 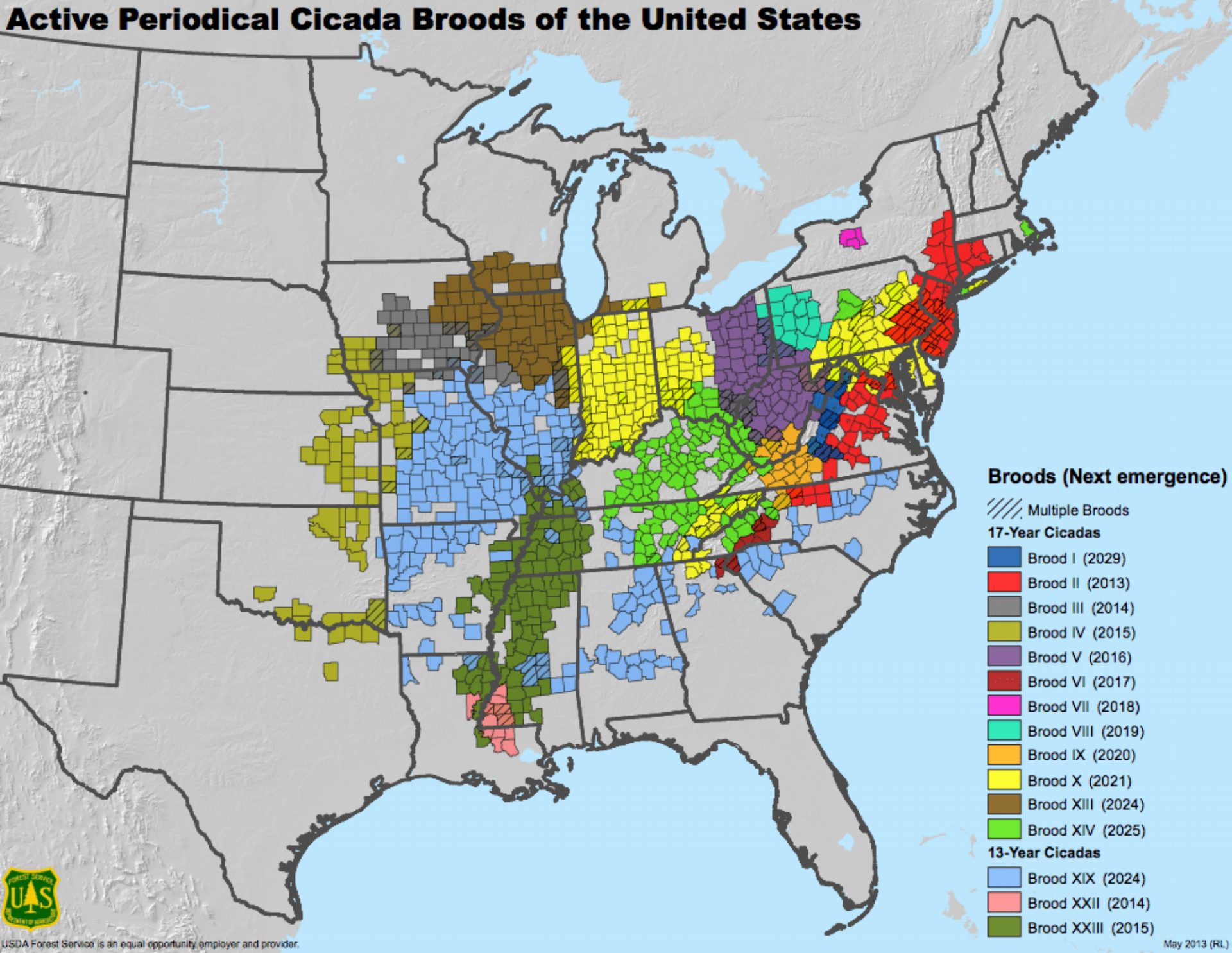 The cicadas will appear in Pittsburgh and 10 counties in southwestern Pennsylvania. They can also be spotted in the northern West Virginia panhandle and the eastern edge of Ohio. The U.S. Forest Service tracks at least four other broods that emerge in other parts of Pennsylvania.

Brood VIII is big in terms of the number of individual cicadas that will make an appearance. Davison said up to 1.5 million of the insects have been documented in a single acre.

What do cicadas do underground for 17 years?

The nymphs form cases around their bodies and tap into the roots of trees to feed. As they grow, they break out of the cases and form new ones. This molting process happens five times over a 17-year-period until the cicada is ready to emerge above ground.

They know it’s time when the soil near the surface hits 64 degrees. They also measure the daylength and only venture out when the season’s right.

“You don’t want to be a bug and come out in the middle of February because it’s a hot sunny day, and the next day it’s 10 below,” Davidson said. 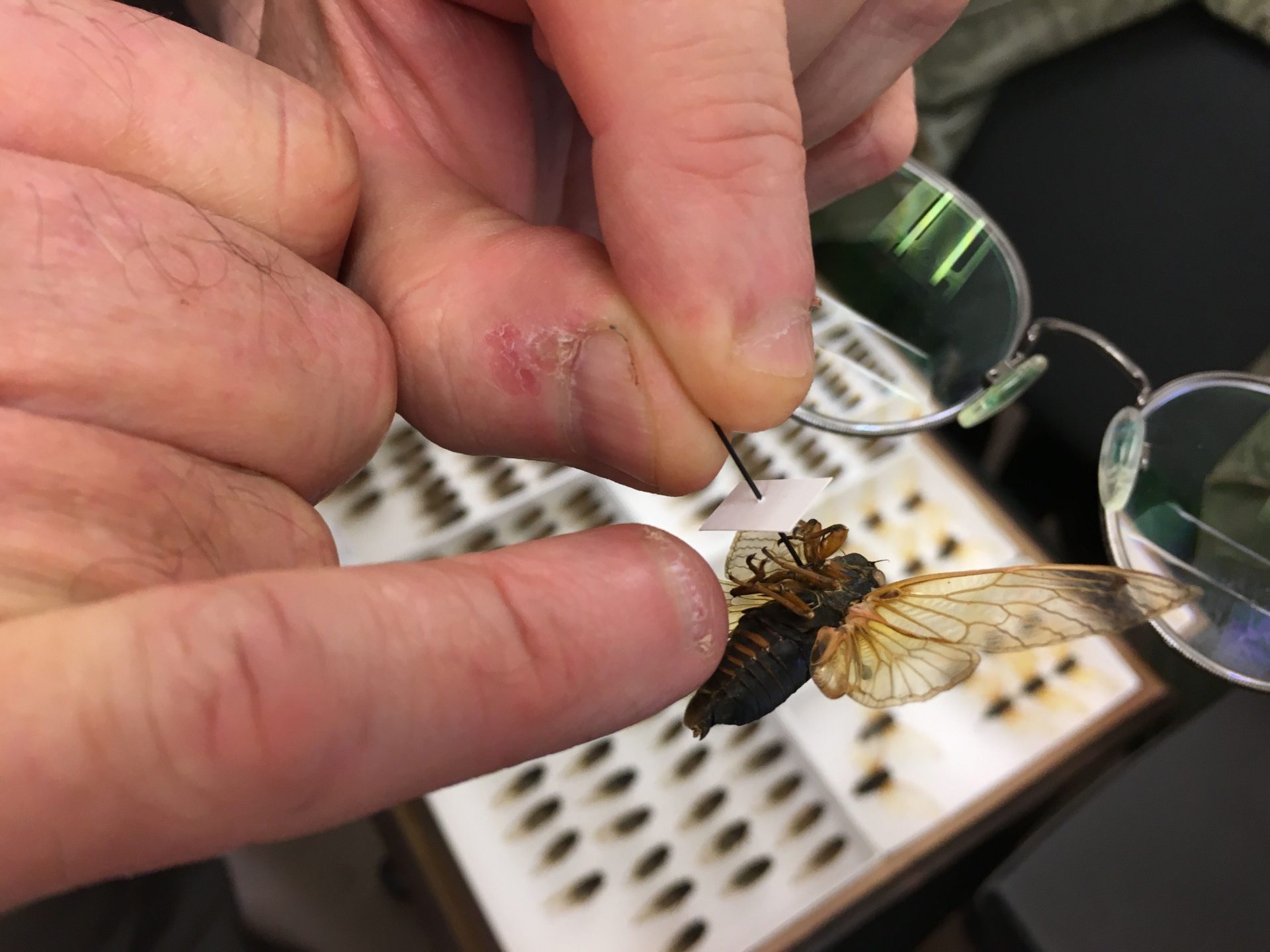 Robert Davidson, collection manager for the section of invertebrate zoology at the Carnegie Museum of Natural History, shows the abdomen markings of a Brood VIII cicada.

What happens to cicadas during the time they’re above ground?

First, the nymphs crawl out and look for a twig or tree to go through one final molt.

“The back will split in a seam and an adult cicada will crawl out,” Davidson said. “When it crawls out, it’s sort of pale and soft and the wings are all crinkled up like an oragami.”

The cicada then pumps fluid from its abdomen into the veins of its wings, which expand.

“The males will sit up in the trees or bushes and bellow out their calls,” Davidson said. “This is the only place where they’re kind of a nuisance. If you happen to have a backyard full of them all day long, it’s pretty noisy because they’re pretty loud.”

The females select their mates and later cut a small scar into tree branches, where they lay their eggs before they die.

Six to 10 weeks later, tiny nymphs emerge from the eggs.

“They just drop out of the tree out onto the ground and burrow down into the soil and start the whole thing over again,” Davidson said.

Will cicadas hurt me?

Nope, they don’t bite or sting.

What impact do cicadas have on the food chain?

A lot of animals like to feast on cicadas, including fish, birds and other insects.

Humans can eat them too, but Davidson doesn’t recommend it.

“They taste kind of like plastic and fat,” he said.

Will cicadas damage my yard and garden?

Probably not, but it’s possible.

“If you’re a healthy tree in the midlife you’re going to be fine,” Davidson said. “But if people have planted an orchard and the have a whole lot of new saplings right at the time the cicadas are out — and there’s million of them — it can destroy the trees.”

He said putting netting over trees helps, as does delaying planting until the cicadas are gone.

The nymphs underground don’t have much noticeable impact on a tree’s health, he said.